Infinity Forms Of Yellow Remember recently released debut double LP via Cardinal Fuzz. Rolling in on psychedelic haze of “Strange Flotsam On The Rising Tide”, don’t be fooled as IFOYR share the love of the holy trinity that is Volume, Repetition and Wah-Wah Pedals – a religious zeal that is shorn through the tracks that follow on this incredible debut LP.

In “Surely They Know” what has to be the Summer (Acid) Hit of 2019 is here, for those who always wondered how Hawkwind via the Beach Boys might sound (anybody?) – wonder no longer as on a refrain of “California Death Trip n My Bones” Infinity Forms of Yellow Remember take you on a whirling white noise blizzard of a trip. In “Great Vibrating Season” and “Walk With The King” IFOYR build from transcendental floating psychedelia to a fuzz soaked garage wipe out, while all the time riding a ruthless motorik drive.

You’re based in Cardiff, right?

Owen Griffleson: Most of us are, yes, a couple of members now live outside, but still in South Wales.

What’s the underground scene there?

I might not be the best person to ask about that as I’m way less involved in the scene than I used to be (I have two children). But it seems quite healthy at the moment – the last gig we played in Cardiff was for Zinc Bukowski‘s album launch, with Excellent Skeleton as well, good turn out, great sets from all, lots of familiar faces- I think one of the best things about Cardiff is it’s small and close knit so you get to know people quickly, and it generally has a very supportive vibe (not a competitive one, like some town’s music scenes seem to get). The down side to its smallness is that it’s reliant on only a handful of people to make stuff happen. If someone moves away/stops promoting/has kids/ or a venue closes, then it can leave a big hole. Currently though Rich (Cosmic Carnage) and Noel (Lesson No. 1) are sorting out loads of gigs at The Moon, and bands like Obey Cobra are being busy and interesting while I sit at home drinking cheap lager and being grumpy.

We are the Matt Le Tissier of underground psych, outrageously talented, but lacking in ambition and work rate. Also unlikely to be chosen for international duty.

What does the name “Infinity Forms of Yellow Remember” refer to in the context of the band name?

Many years ago I was at a friends house and picked up a book called “The Joy of Sects”, in there I read about an Australian cult who’d been named Infinity Forms of Yellow Remember, but had changed their name after a court case involving their business of selling bottled tap water as miracle cures. I thought to myself, one day I’ll have that for a band name. Then in 2017 I found a guitar and box of effects pedals in my garage (left by a friend who moved to Ireland), so started playing a bit, then invited a couple of friends to jam. As we had no internet presence for a long time, any attempt to look us up would just result in a google page of cult info links, which amused me. It’s the sort of rampant careerism that pleases Cardinal Fuzz and people who book us, I’m sure.

I started listening to Nirvana when I was 12/13 and ever since I’ve been on a search through music, but I guess there’s always been a back bone of loud guitar bands at all times, even when I was out clubbing all the time and listening to loads of electronic stuff, I’d still chuck on some early Flaming Lips or Kyuss or something. 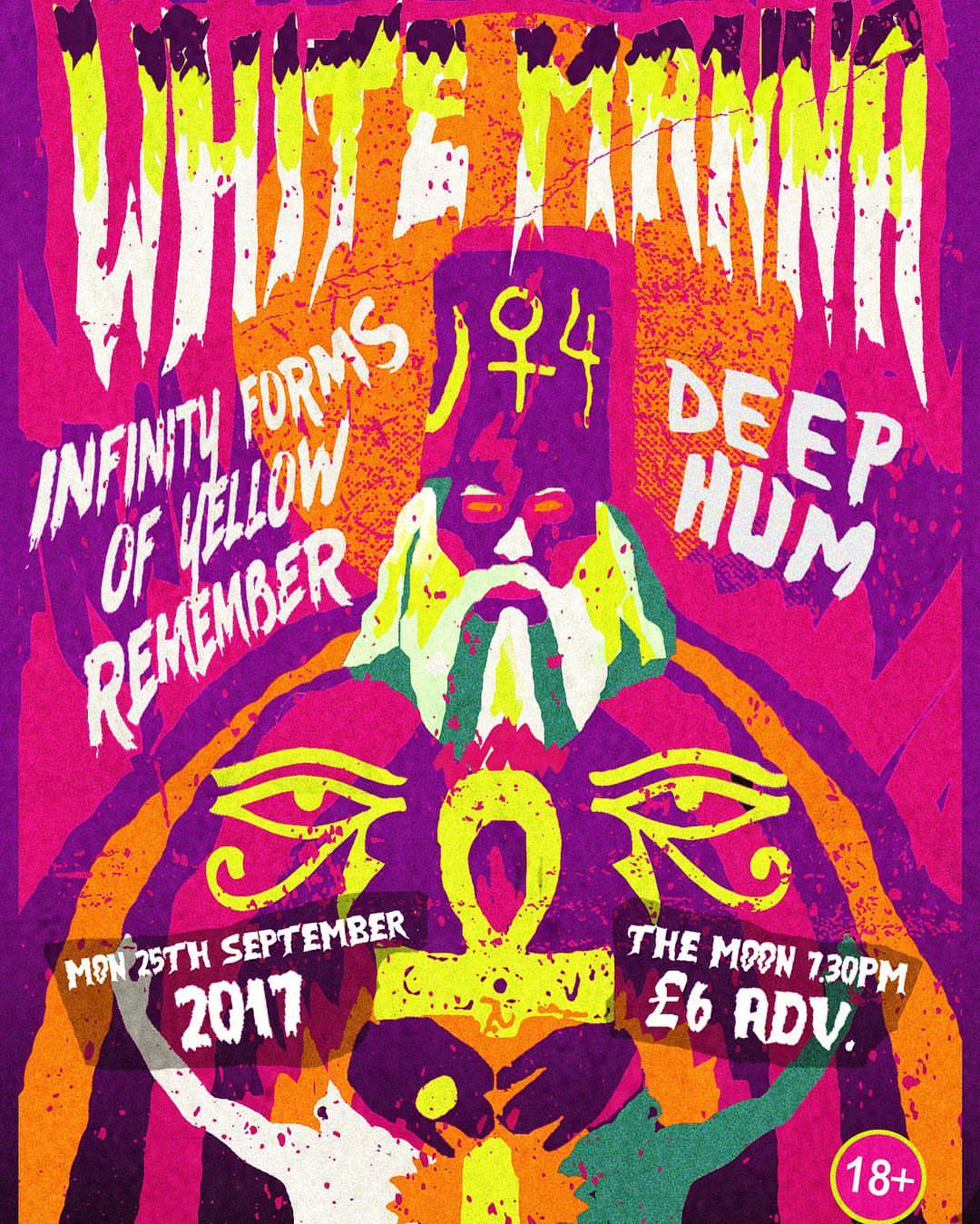 As far as the IFOYR album goes I think when we started writing it I was listening to Hawkwind (interview here, here, here, here, here and here) and White Manna (interview here) a lot, and also having a bit of a Kosmische German obsession – Ash Ra Temple, AR and Machines (interview here), Neu, the cosmic couriers stuff, Popol Vuh (interview here) etc etc. But that’s just me, there’s six people in the band, and we jam the songs out, so the influences are changing during the song, let alone over the years! So I guess the most important influence is each other because we’re all listening to, and reacting to what everyone else is doing. (well, on a good night anyway)

Can you share some further details how your album was recorded?

All the main instrumental parts were recorded live, together in the room, no more than 3 takes, mostly 1 or 2 I think. Then the synths and vocals were overdubbed and some acoustic guitar. The end of the album (“Grave Goods”) was recorded on winter solstice in a burial chamber near Cardiff. Then Tim our synth player spent a long time mixing it, as A. it was quite challenging what with all the bleed and sounds flying around, and he was doing it all in his flat, and B. because I’m bit obsessive about mixing/tone etc. But we got there in the end. I like how CAN (interview here) approached things- recording hours of jams, then editing/mixing/overdubbing things and making them more coherent. Unfortunately we didn’t have a castle, or months of free time. 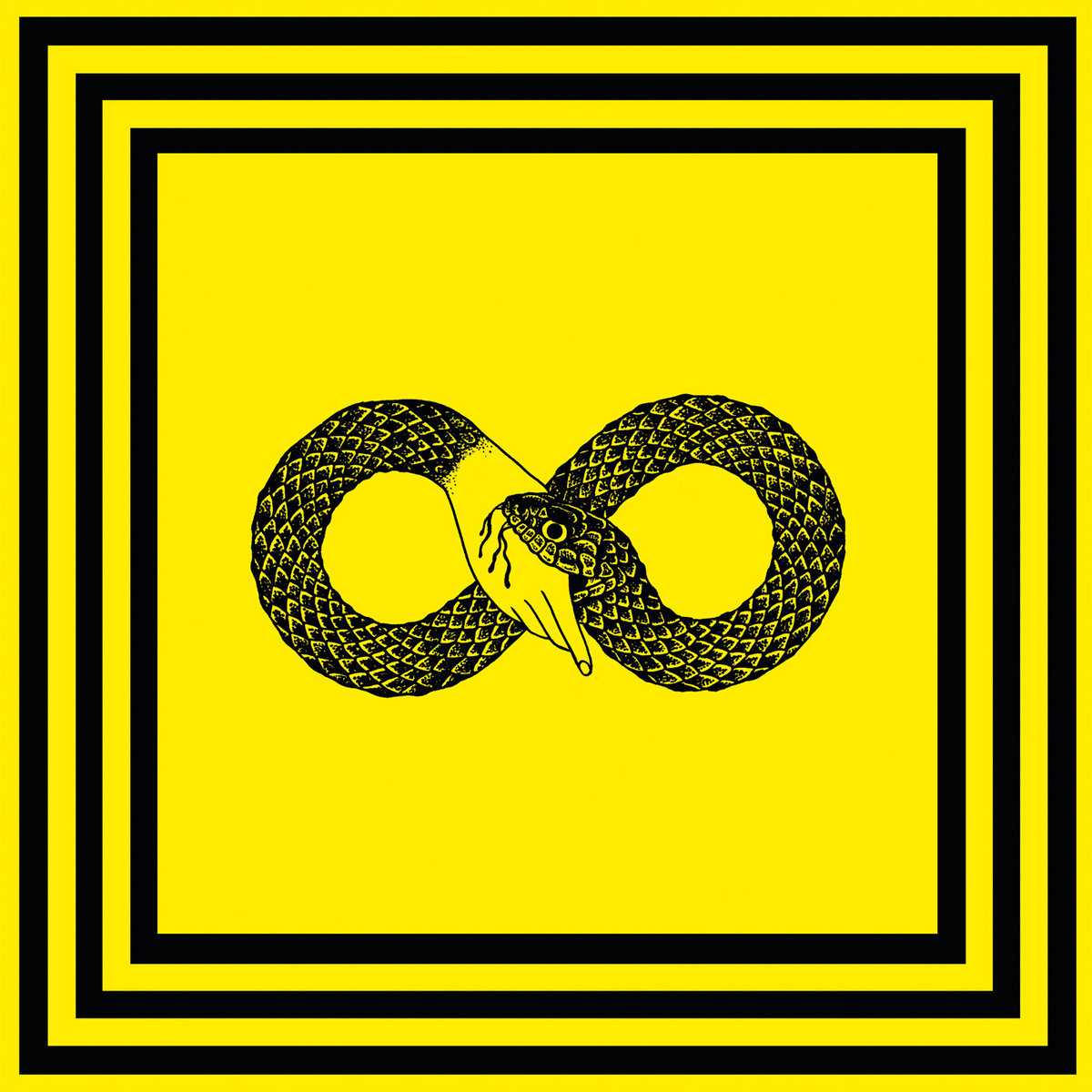 I wouldn’t say there’s a concept behind it, but I wanted to make an album that worked as a whole, had a bit of a journey to it, rather than just being a collection of songs that have been chucked together. As I hoped to get it out on vinyl then it made sense to arrange it in 4 parts. After we finished it I realised that there were certain themes in the songs that reoccur – a mix of cynicism and hope maybe? Noise and harmony? Or perhaps I’m trying too hard to find meaning in our stoned gibberings, I’ll blame this red wine I’m drinking, don’t usually touch the stuff.

In a rush. Between working, children, cooking, DIY, driving around, etc etc I occasionally pick up a guitar and even more occasionally I’ll play something that pleases me. If I’m feeling particularly motivated I’ll organise the other 5 into a practice room, and then we let rip for 3 hours, record everything to my Tascam and see what’s worth returning to. Being able to listen back and analyse the jams afterwards is vital, seems like you can make a lot of progress with a small amount of time. Efficiency is vital if you want to be creative as a parent.

Really important, my favourite thing about playing music is those moments of spontaneous brilliance that you sometimes get when jamming. Also I get bored easily, if I play a song the same way over and over again it loses it’s joy, I like to have at least a section in there where things can get loose. But from a listening point of view I find a lot of records that are fully improv/jam based can get a bit dull, too meandering maybe, or follow the same energy curve every time. So we aimed for something that mixes song writing and structure with wigging out. 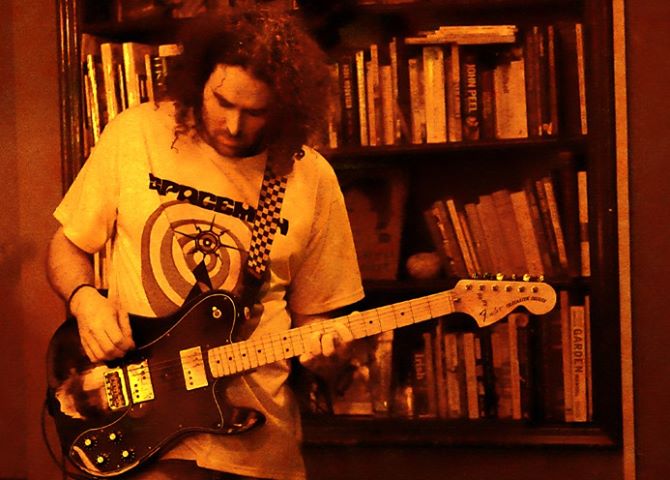 We don’t often play live, partly because of family commitments, partly because I can’t be arsed most of the time. if we do play it’s usually because it’ll be with a band I really like – we’ve played with White Manna (interview here), The Cosmic Dead (interview here), Sunwatchers, but I think a highlight was going up to the Golden Lion in Todmorden where we played with Snakes Don’t Belong in Alaska and Dave Cambridge from Cardinal Fuzz got to come see us. Was a great night. 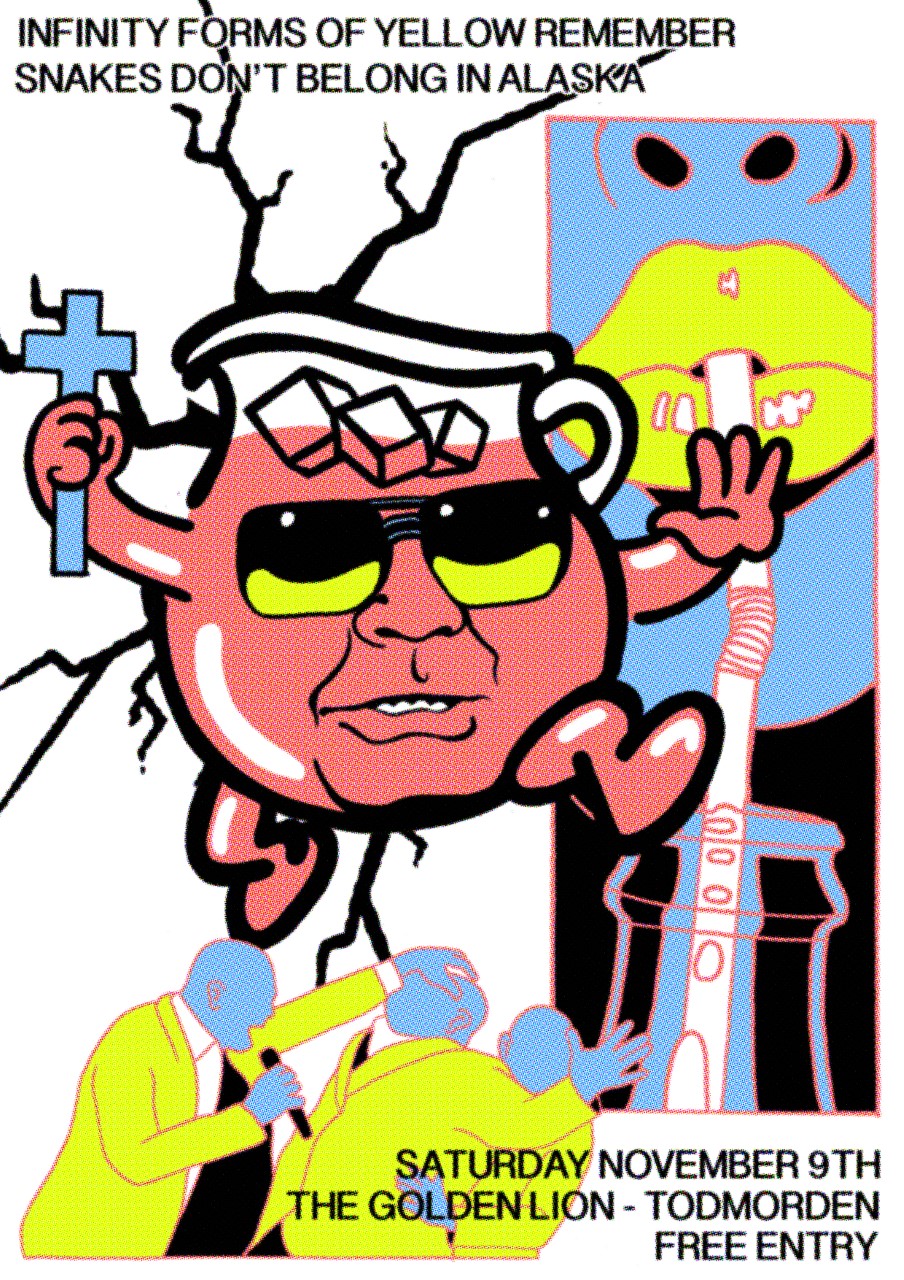 We’re (slowly) writing another album, hopefully that’ll get done this year, also hoping to get some gigs out of town, maybe a little festival or something would be nice. 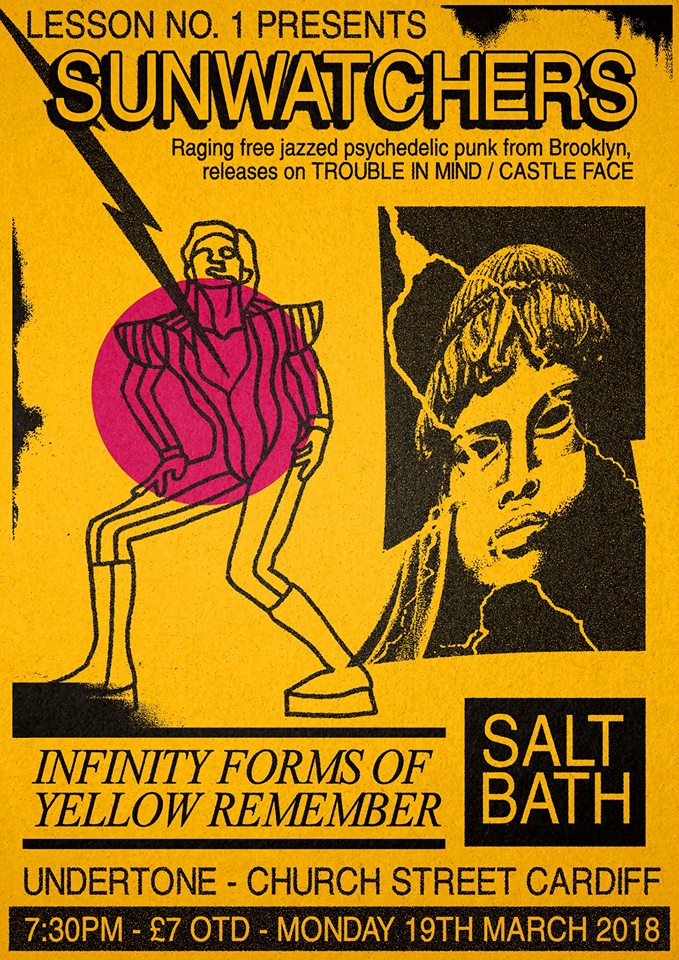 Yeah everyone does other stuff- IFOYR is the side project really! Gaz plays in Obey Cobra, Luke is in MILK, Nathan’s done stuff with the Dharma Violets, Tim’s released electronic stuff under the name Slamfish, our new bassist Adde is in Excellent Skeleton and I chucked up some bedroom recordings on the IFOYR bandcamp under the name Slanting Currents.

Find it really hard to make favourite lists, so I’m going to list everything I’ve listened to today (I had to go to work so I’ve been slacking on the listening) – Alice Coltrane – Journey in Satchidinanda, White Manna (1st album), Assemble Head in Sunburst Sound – When Sweet Sleep Returned, The Heads (practice room recording), Carlton Melton AQ Hits, and finally what I’m listening to now, which is also new, and I’d recommend it, which is Dead Sea Apes- Night Lands.

Be excellent to each other.