“Playing that sounds and feels organic, dynamic and effortless “

How do you remember the recording of this album?

It was a nice grey and foggy day, and there was some kind of softness in the air. It was definitely cold up there, but the place and view were beautiful and somehow comforting, and the fact that all 3 of us (Christophe, Deborah – who was filming – and I) were in the same boat created a particular atmosphere.

Did you prepare anything?

I had outlined 2 or 3 ideas – things I had been working on recently, or that I imagined could work in this setting. We recorded several takes, and I did a few improvised bits roughly in the same spirit. It was harder than I had imagined to blend in with the sounds of the city surrounding us, as they seemed to vanish as soon as I touched any instrument. For the more abstract piece (tracks 3 and 6) I think it turned out rather well; the others appear more as fragmented mono- or dialogues.

You play a rather basic drum kit.

I actually played 2 different drum setups for this session. The minimalist kit you see in the video (the audio of which didn’t end up on the release) is largely self-made; the toms without bottom heads produce a more raw or primitive sound, which I found fitting for this setting. The other kit is pretty extensive for my doing (3 cymbals, 5 toms); it’s something I put together only recently, after experimenting with circular melodic patterns, which simply called for more tones and textures. 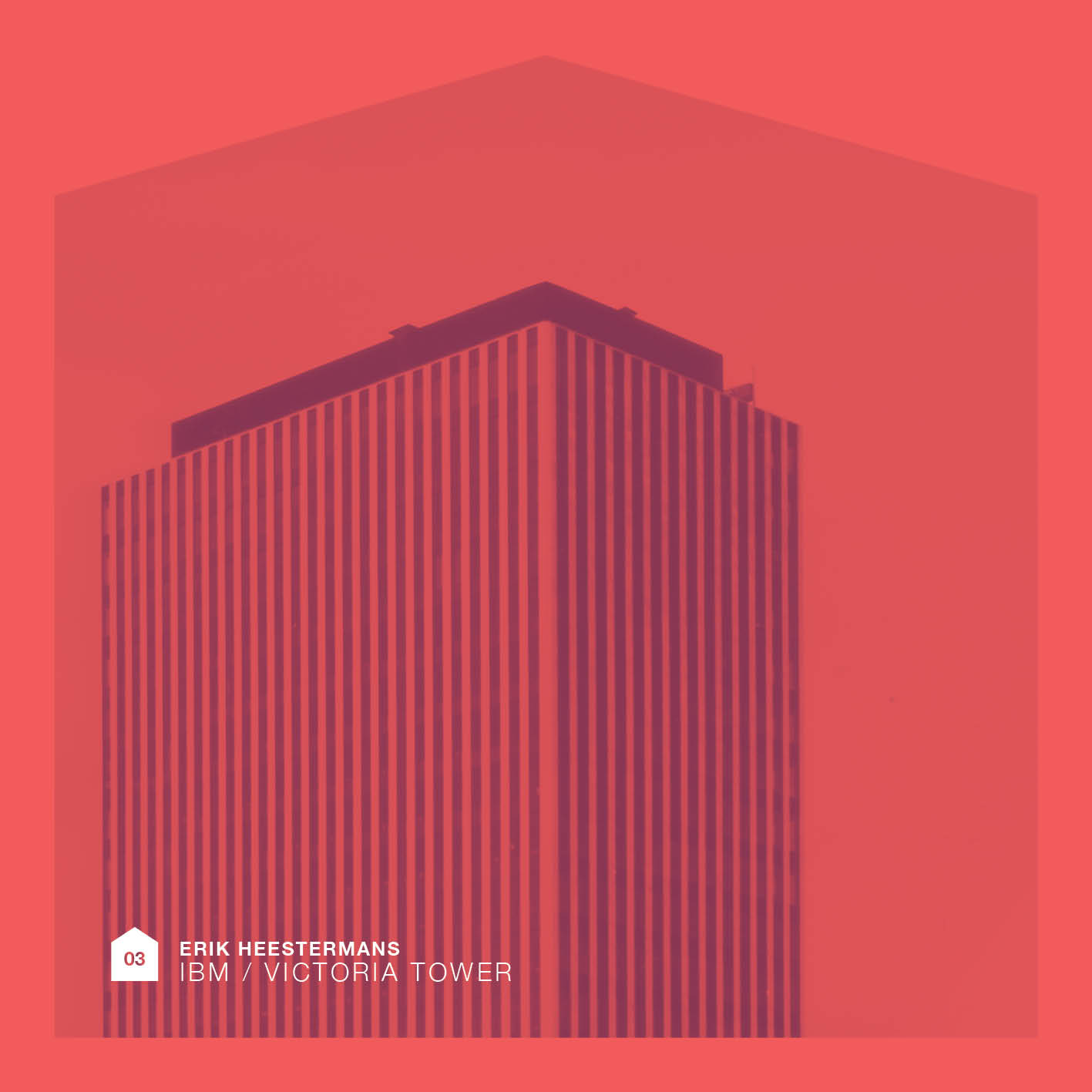 That being said, I think I feel most at ease with a simple setup, in any context. I’ve noticed that when I try to incorporate more elements, I tend to look over them and leave them untouched, unless they have a clear and specific purpose. It’s probably just a force of habit, but it works for me.

I saw you live playing a solo drum set at Netwerk in Aalst in 2014. Was this the only time you ever played solo?

That was indeed the only time I’ve ever played solo.

Is this your first solo release?

Apart from a track I sent in for that compilation on Knife in the Toaster (thanks to you), this is my first solo release. 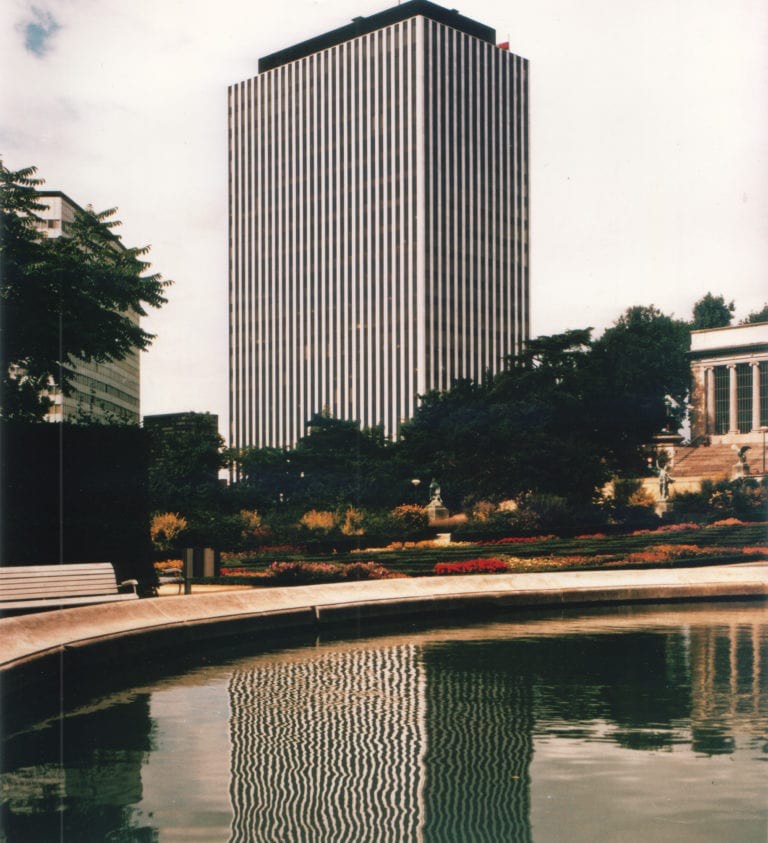 Why did I have to wait 6 years between that solo concert and this solo album?

You should’ve told me! In all seriousness, I’m surprised and feel flattered by the thought that someone has been waiting for a solo release. Which, in part, maybe explains why ‘it took so long’ for me to get to it. First of all, I’m slow. I could also say: I’m just taking my time – but that feels like a bit of a lie. Second, in the last 7 years or so I’ve been mostly playing in various bands, which caused my solo practice/routine and even my interest in more experimental music to fade to the background. In the last 2 years this void has become more apparent, so when things were shut down in march 2020 I slowly started shifting my perspective in that direction again. Third – and this regards anything I make or do all by myself: I get very, very self-conscious, demanding, and critical. It’s a tricky triumvirate to navigate, and I’m constantly working on both the navigating, and on being less uptight about it. Because although it keeps me alert, it also prevents a lot of things from happening. To get to the point where I think ‘I want people to be able to listen to this’ is a huge process. So essentially it took an opportunity like this to push me over the edge – I’m happy, and grateful to Christophe for that. I like what he proposes with HUIS on a conceptual level, because it calls for a very singular type of solo performance, and somehow the time felt right. Plus, I didn’t have time to overthink – which is vital to me in general, and when playing (improvised) music in particular. 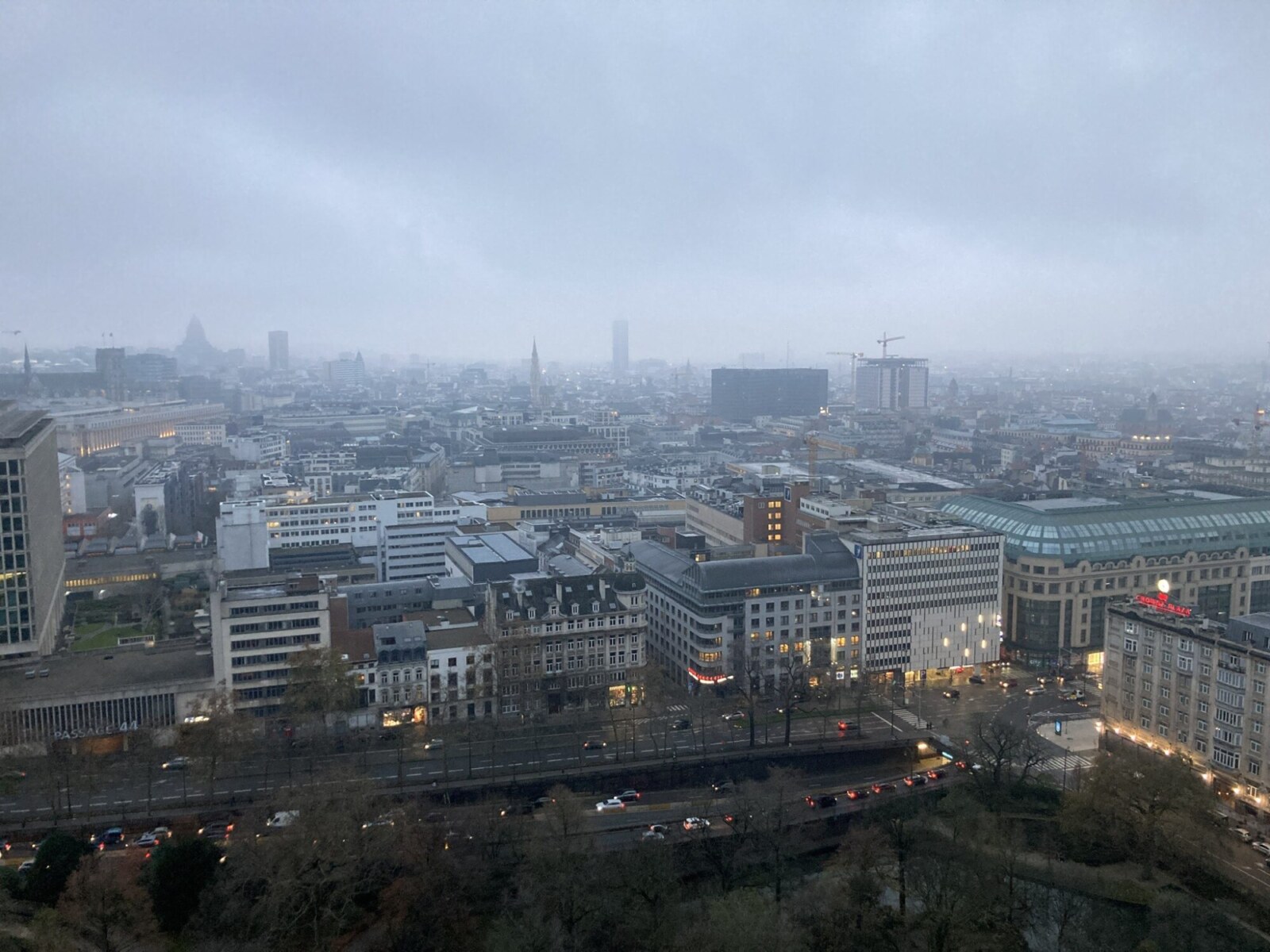 Which role does playing solo live take within your music?

Weirdly, that one solo concert at Netwerk, Aalst was a revelation for me. Afterwards, I immediately said to myself: I want, or maybe even need to do this more often. To be solely responsible for whatever’s happening in front of an audience during a certain period of time is an almost surreal experience. So why haven’t I done it more often? For the same reasons we’re only now seeing this solo release, I guess. But I’m eager to look for and create opportunities, both recorded and live, because I feel like it can really expand my horizon as a musician and performer.

Ignatz says you take your time as a drummer, and you play rather reduced.

It has to be said that Ignatz’s music is a fickle beast – in the best possible sense. To begin with, Bram will always be the one to start playing first – whether it’s an older song or something new he’s been working on. Even the songs we’ve been playing for years will never be exactly the same, so Tommy Denys (who plays bass) and I usually listen for a while, feel it out, go through some options, and then we jump in together. The music tends to be somewhat repetitive in nature, and I think it works best when Tommy and I stick to a certain pattern and feel, creating an organic blanket on which Bram can let his idiosyncratic guitar magic unfurl. It’s not pop music with stops and breaks and tempo switches; even verses and choruses (if there are any) sometimes merely morph into one another without much ado. So with Ignatz & De Stervende Honden, I’m mostly preoccupied with preserving and respecting the drive or flow, and this informs my playing: rather repetitive, dynamic, and (hopefully) never intrusive.

How would you describe your style?

In general I’d say I aim for my playing to sound and feel as organic, dynamic and effortless as possible, regardless of context. And I’m very wary of overkill. I think that’s especially exemplary of my approach when I’m playing in bands: I try to tend to what the music in question calls for, plain and simple. It’s a cliché and it might not sound all that exciting, but there’s so much to learn if you’re listening to the music itself – it’ll take you places you wouldn’t reach on your own, and I find great joy in that. One de facto plays with a personal touch, bringing a specific voice to the table, so I don’t worry about that part too much.

When I’m playing solo, it’s all of the above, and I either just allow myself to play freely, or I adopt a research state of mind. I’ll pick out a basic parameter to focus on – a rhythmic or melodic pattern, the interplay between different sound sources, pure dynamics – and then just see where it leads me. 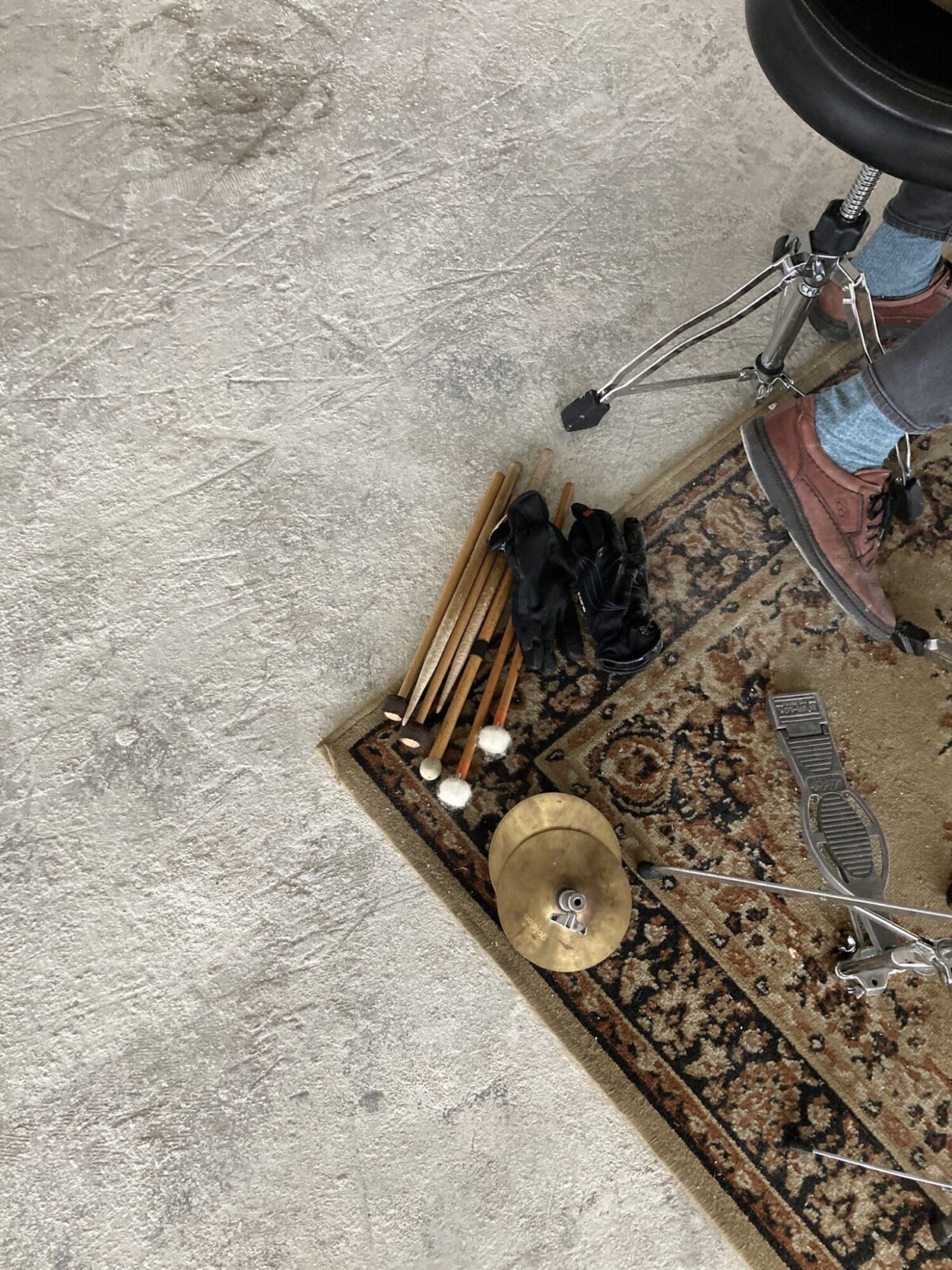 When I asked you to contribute a track to the Knife in the Toaster compilation, you sent me a track the next day. Do you have a big archive of unreleased solo recordings?

I do have a bit of an archive – although for that release I did record something new and rather atypical. I have a significant batch from many years ago, when I was deep into improvised and experimental free music, and only had a pair of half decent mics. To me these recordings are a personal document, and I’m on the fence about whether I’d consider them for release, although it’s been a long term project of mine to go through them and select bits that I find interesting. Recently, I’ve acquired a fair amount of decent equipment, and I’ve been recording quite a bit, mostly drums, both solo and for others – being able to record on demand being something I wanted to get into. These more recent recordings run parallel to me figuring out how to actually record and mix, which of course is a process in itself. But it’s been pushing and inspiring me to record and be creative, so I hope to come up with something in the near future.

Did you see ‘Full Mantis’, the Milford Graves documentary?

I have not watched it, although it’s been recommended to me many times. I’m convinced it would blow me away, both on a musical and spiritual level. There’s this documentary up on YouTube called ‘Milford Graves documentary’ (I love that title) that I’ve really enjoyed, especially a snippet of him playing with David Murray that I’ve watched dozens of times and that never ceases to amaze me. As I’ve said before, I’m slow, so it feels as though I’m still processing that. But ‘Full Mantis’ is definitely on my list.

What do you take from playing with others into your solo work? And the other way around?

When I first got a drum kit, I played mostly by myself for years. I was listening to obscure hardcore, but also discovering Flaherty/Corsano and all that free jazz, so I was either bashing away or experimenting and taking up all the space I had, and this definitely shaped my ears and triggered my creativity. However, I soon released that loud, fast and intense playing wasn’t necessarily what interested me most – I’ve always liked the role silence plays when performing music. That ‘zero space’ in sound is something we were exploring with Sheldon Siegel, and I’m really happy I got to do this with 2 close friends: it prevented us from taking it all too seriously.

I inevitably took some of this free spirit with me when I started playing in bands. Through touring and having to learn songs by heart, I discovered I really liked figuring out how specific musical contexts work, adopting different ways of playing, looking for the right sound and finding my own place amidst all this. This in turn renewed and transformed my interest for the fundamental freedom I had started out with, and that I like to explore when playing solo: I’ve gotten more conscious of time, space, feel and touch, trying to make every hit and every gesture matter.

Do you see what you do on this album as ‘drumming’? Or rather as sound art?

Given the particular setting and concept behind HUIS I’d say it’s a musical performance. I’m obviously playing drums for most of it, and I reckon the more eerie tracks do gravitate towards sound art. But I’m attentive to rhythm and melody all the time while playing solo, and the combination of those two inevitably constitutes some form of music – so to me it’s just that: music. 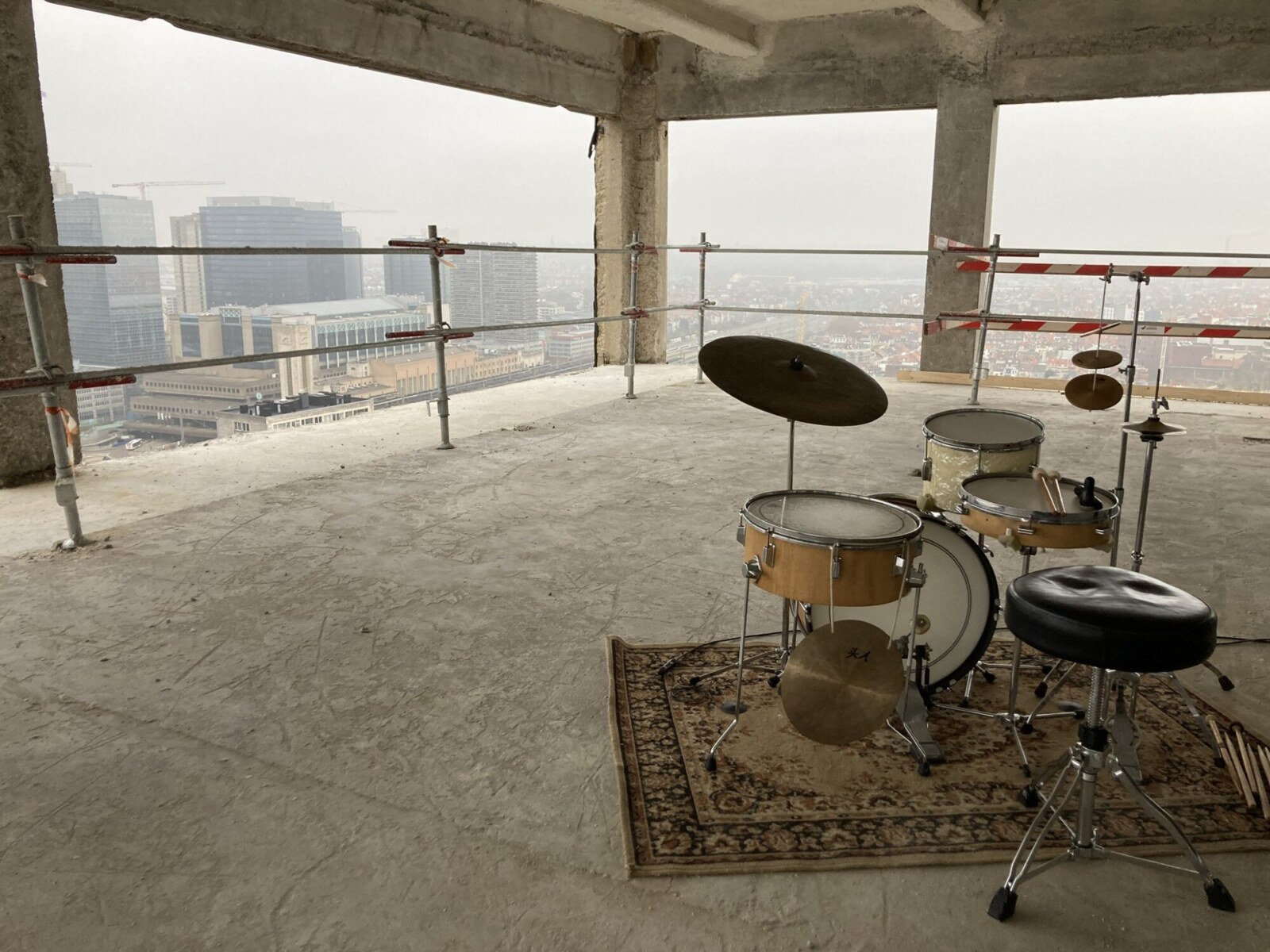 One of the most remarkable concerts I saw from you was with Mad Nanna. It seemed like a tough job.

I remember it was tough for me indeed. I think at that time I was going back and forth between 2 paradigms – the free improvisation universe on the one hand and the band/song world on the other hand. I hadn’t quite found any stable ground for myself and my playing yet. It was my first time playing with people I hadn’t met before, and their (approach to) music struck me as very peculiar, maybe precisely because it was floating somewhere in between improvisation and songwriting. There was some kind self-sabotage at play, which was something I couldn’t wrap my head around at that time; I was trying to do a good job, instead of just playing. Looking back I think it was a very valuable experience, and I’m also very happy to hear that you liked it. One thing I’ve learned is that as a performing musician, you’re not necessarily in the best place to judge the quality of your (and your band’s) performance.