GOD Records Garden Of Dreams from Greece recently sent me a vinyl copy of You Reached For The Stars by Twink & The Technicolour Dream. Twink is a legendary drummer who was part of many amazing bands, including Tomorrow, The Pretty Things, Pink Fairies and also released cult classic Think Pink back in 1970.

It was in the autumn of 2012 that my friend Marco Conti from the Italian band The Technicolour Dream contacted me with view to Marco, with Fabio Porretti, producing a Twink & The Technicolour Dream album. It sounded like a great idea. Marco is the bass guitarist/vocalist with The Dream & Fabio is the guitarist. Luciano Pavia was their drummer at the time and is featured on the album performing about 50% of the drum parts, however, I have subsequently replaced Luciano in The Dream. From the get go Marco wanted to include two new recordings of my original songs “The Dream Is Just Beginning” recorded by The Pink Fairies on their debut album Never Neverland in 1971 and You Reached For The Stars originally an acoustic demo version released on the Twink album The Lost Experimental Recordings 1970. He sounded sure about that so I agreed. Marco asked me to send him some lyrics for them to work on adding the music and arrangements. I went through my previously unrecorded lyrics file and decided to send them some lyrics written about 10 years ago while I was living in Hollywood, Los Angeles. I had some ideas for chords, feel and atmosphere on some of the tracks and I told Marco about those ideas but I left the musical composition overall to Marco & Fabio. I sent the following lyric sheets for “Dead End”, “Afterglow”, “Moonchild”, “Inside The Old Ones” & “Lady Love”. After a while I received some rough sketches of the songs which sounded great and after some deliberation over a couple of the songs we decided to record the basic tracks at Gulliver Studios in Rome. All the basic tracks were completed except for “Inside The Old Ones” which we decided to jam on when I arrive in Rome to record my vocals.

This song describes how I felt and my observations during my first visit to the US in 1984.

Fabio’s guitar work on this track is wonderful as is Marco bass and backing vocals. Luciano Pavia and I share the drum parts which worked out very well. This is one of my personal favourites on our album along with “You Reached For The Stars” & “Moonchild”.

“The Dream Is Just Beginning” (Alder)

A perfect inclusion for this album. The original Pink Fairies version was the last track on Never Neverland and this re-recording celebrates where I left off creatively with that great band, in terms of psychedelic sound picture painting, and now finding myself back on track.

We more or less followed the original version mood with just me on vocals, Marco on bass and Fabio on guitars.

In early 2001 I headlined a gig at The Troubadour, West Hollywood billed as The Pink Fairies (LA) featuring Twink supported by Smallstone, The Tyde & The Quarter After, these are some of the bands that I’d toured and recorded with in California. The lovely Jimmy Hey was DJ that night. The first verse refers to that exciting night and then the song drifts off into something completely different. 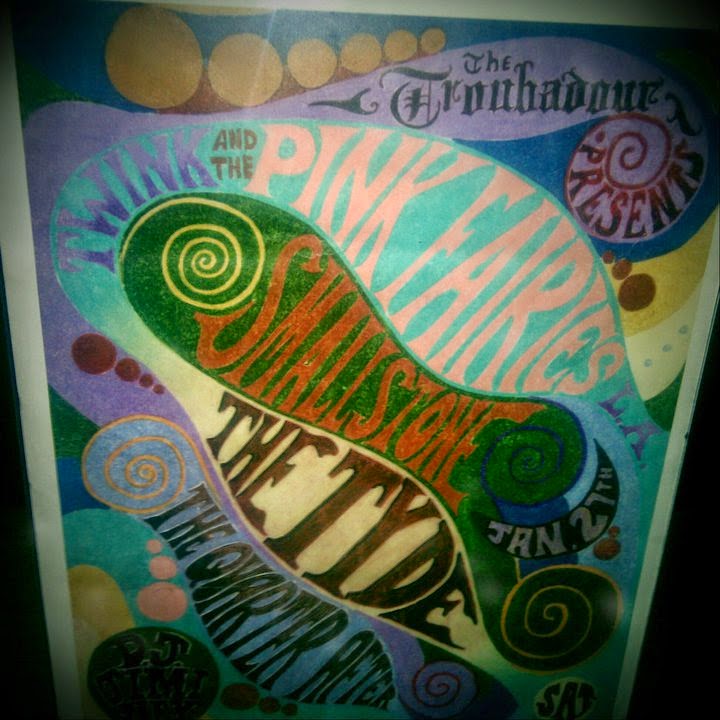 We have two very special guests on this track, Stefano Palandri on guitar & Vincenzo Romano on organ who give a really cool edge to this recording. Fabio is on guitars with Marco and myself sharing the lead vocals. Marco is also on backing vocals and bass guitar and again I’m sharing the drum parts and percussion with Luciano Pavia.

The verses to “Moonchild” were written in 1972. I dedicated this song to my LA band “Moonchild” by adding the moonchild repeats which worked perfectly into and with the lyrics.

Marco and I are singing duet on this song. I love this track however at one point I was concerned it wouldn’t make it to the album. Then, out of the pink, Brian Godding playing lead guitar and Vincenzo Romano on organ worked their magic for us. Fabio on guitars, Luciano and myself on drums and Marco on bass guitar along with Vincenzo brought the track up and Brian Godding took it through the roof.

“Inside The Old Ones”

A psychedelic jam crowned with some obscure lyrical content. Just Marco, Fabio and myself recorded in just one take.

Another reference song to my band Moonchild and tells of the day we exchanged a vintage Mercedes car for a mixing desk for our recording studio, Phantom Studios in Fontana.

“You Reached For The Stars”

While searching for songs for The Pink Fairies album Never Neverland I wrote and recorded a demo version of “You Reached For The Stars” but the song was never considered for that album. The demo was released on my album The Lost Experimental Recordings about 15 years ago and is also a bonus track on our album. The new version has received extensive airplay in the UK and US. 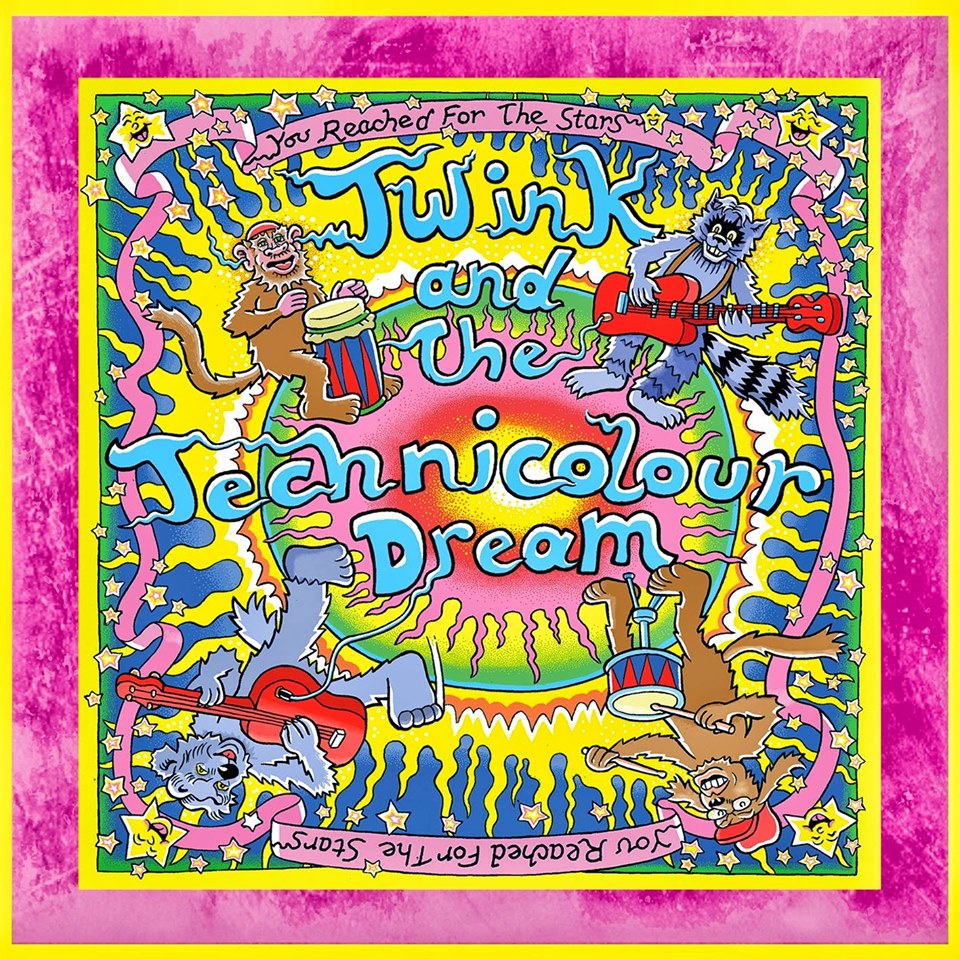 In early 2013 Sunbeam Records released the definitive version of TWINK PINK, my 1969 recording, on CD and on pink vinyl. The CD carried 9 bonus tracks.

Track 11 “Ten Thousand Words In A Cardboard Box” by The Aquarian Age recorded in 1968 at Abbey Road Studios (Studio 3) and released by EMI as the single A side.

Track 12 “Good Wizard Meets Naughty Wizard” by The Aquarian Age recorded in 1968 at Abbey Road Studios (Studio 2) and released as the B side of “Ten Thousand Words In A Cardboard Box”.

Track 13 “Ten Thousand Words In A Cardboard Box” a wonderful recording made in 1999 at Westwood Studios, Los Angeles with a California band called “Smallstone” backing me. I toured California extensively with “Smallstone” as a guest vocalist on the bill with some great bands and we even supported my old band The Pretty Things when they came to play at The Whiskey A-Go-Go in West Hollywood. The musicians playing on this recording are James Ambrose on psychedelic sitar sounds, Enrique Maymi, now touring and recording with The Brian Jonestown Massacre, on featured rhythm guitar, Jeff Davies on lead guitar. Jeff was previously with The Butt Wizards and The Brian Jonestown Massacre, Tommy Branch on bass guitar and Dany Hole on drums. Ricky Trux is on backing vocals & tambourine & I’m on lead vocals.

The THINK PINK re-issue on Sunbeam Records had been out for a while and in June Twink & The Technicolour Dream were booked into Abbey Road Studios to mix and master our album You Reached For The Stars with Peter Mew who was still working at Abbey Road. Marco Conti thought it would be a good idea for me to return to Abbey Road and he was right. I had previously worked with Peter on the Tomorrow’s album Tomorrow featuring Keith West in 1967 and SF Sorrow with The Pretty Things in 1968. It was a real pleasure to see Peter again and with Marco, Fabio, Mimmo, myself and Peter all in Studio 3 it wasn’t long before it turned into a really fun time. However, Peter’s work was accomplished to the highest standard. 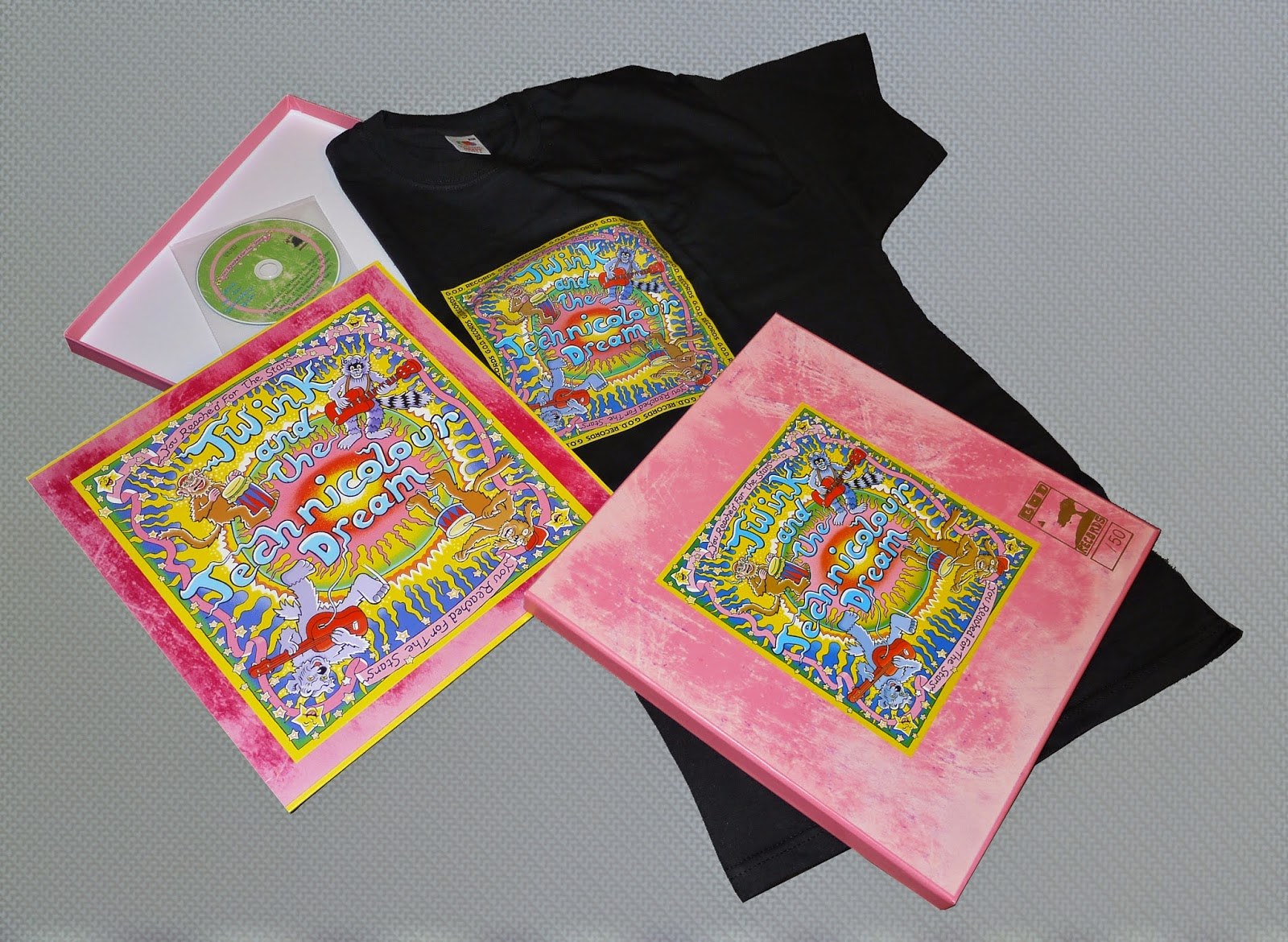 We had a a couple of record companies interested in releasing our record when it was finished including Sunbeam Records but we found our album to be a little short time wise so we decided to add some bonus tracks to beef it up. 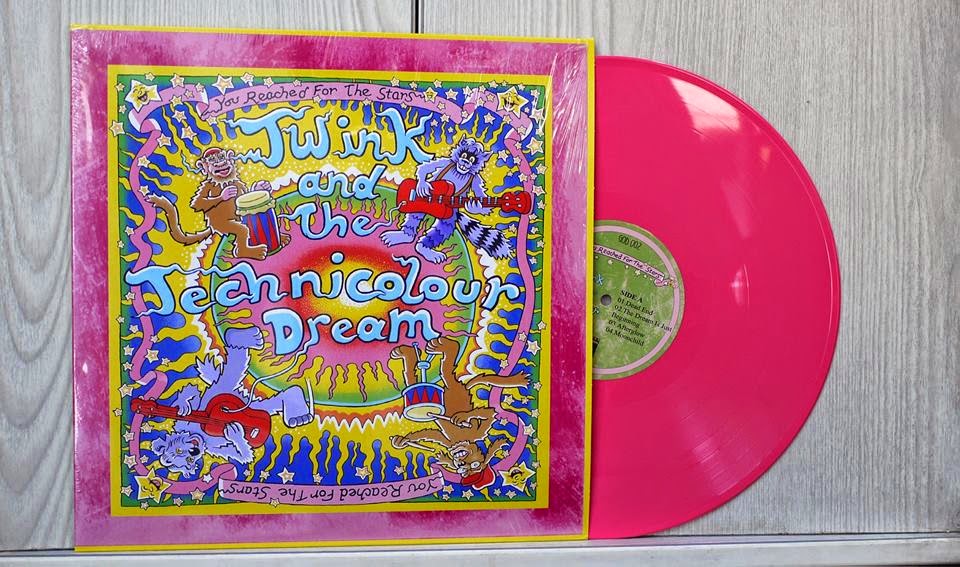 YOU REACHED FOR THE STARS BONUS TRACKS

Track 8 “The Dream Is Just Beginning”. A private recording from 1970 originally released on the my album The Think Pink & Never Neverland Demos.

Track 9 “You Reached For The Stars”. Also a private recording and this one was previously released on my album The Lost Experimental Recording 1970.

Tracks from 10 to 15 are live recordings from a show I did with the LA band “Backbiter” backing me. Jonathan Hall on lead guitar and backing vocals, Heath Siefert on bass guitar, Bob Lee on drums and me on lead vocals & percussion. The show was recorded at Spaceland, Silver Lake, Los Angeles on April 28th 2001 and we were billed as The Pink Fairies (LA) featuring Twink.

Track 10 “The Snake” was originally recorded by The Pink Fairies. Always a great song live, it sets the stage on fire & the audience too.

Track 11 “Heavenly Man” was originally recorded by The Pink Fairies. This was the first time this song had been performed live that is on the shows I did with Backbiter at The Troubadour & Spaceland billed as The Pink Fairies (LA) featuring Twink.

Track 12 “Ten Thousand Words In A Cardboard Box” an original recording by The Aquarian Age but this live version is in the tradition of my Think Pink album version.

Track 13 “Wargirl” was originally recorded by The Pink Fairies. There is a killer guitar performance by Robbie Gladwell on my album Mr. Rainbow.

Track 14 “Teenage Rebel” was originally recorded by The Pink Fairies and this song shifts into “Fractured Sky” an original recording by Bevis & Twink from the album Magic Eye. 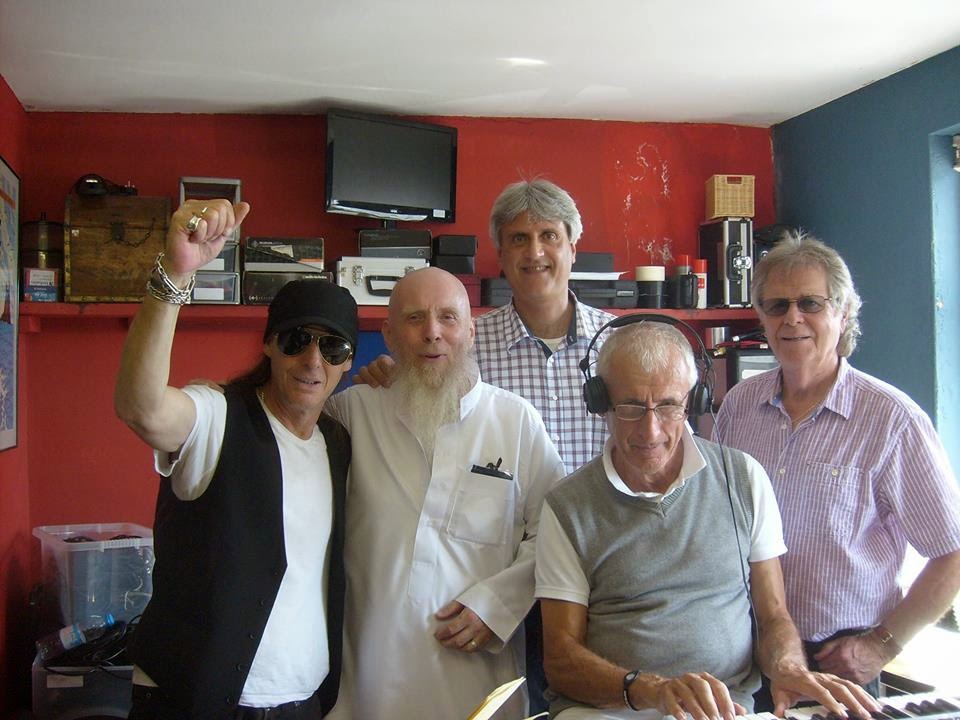 We then returned to Abbey Road Studios where Peter Mew did the mastering for us on the bonus tracks.

That extraordinary artist Kim Deitch has only done one other album cover art & that was a Technicolour Dream CD. Marco Conti asked Kim to do the cover art for Twink & The Technicolour Dream’s CD You Reached For The Stars and to our suprise he said yes. We loved the final artwork which features all the band members, including Luciano, as cartoon animals.

We decided to let Sunbeam Records release our album based on their outstanding performance with the THINK PINK re-issue and it was released in October 2013 on CD only. In early 2014 Burger Records from Fullerton, California released it on a very special limited edition collectors cassette version and G.O.D. RECORDS GARDEN OF DREAMS have just released a limited edition of 500 copies on pink vinyl and also a extra special box set of 50 copies which includes a tee shirt, pink vinyl album and a CD.

That’s it for You Reached For The Stars. I’ll start soon on THINK PINK II which is still in production.