Musical collective from Munich (Germany), founded in 1969 by Christian Burchard and Edgar Hofmann. Considered as one of the most important German jazz-rock bands during the 1970s.

Where did you grow up and what were some of your influences?

Christian Burchard: I spent my youth in Hof, where my best friend in school since 1956 was Dieter Serfas. We had big fun just playing free music, using jazz, rhythm and blues, but were also influenced by contemporary music. In Hof were a lot of soldiers from USA (because my hometown was close to the East German and Czechoslovakian border) at that time not yet a professional army, so some of them were musicians and especially the black among them were jamming with us. We had for instance a bass player from New York who was familiar with improvising and a singer who did all the songs from Chuck Jackson. Also there was a local Jazz Group that played the modern styles of John Coltrane, Charles Mingus or Yusef Lateef. They gave me a vibraphone, before that I was exploring mostly on the piano.

Were you in any bands before forming Embryo?

First band was the legendary Contemporary Trio & Dieter Serfas, Edgar Hofmann and me, formed in 1964. No recordings from that unique avant-garde group. In 1966 I met and played with Chris Karrer and Peter Leopold who founded in 1968 Amon Düül and I did some vibraphone on their famous Phallus Dei album. Since 1967 I was a member of the Mal Waldron Quartet. Some of the recordings done were later released as Embryo works (Embryo with Mal Waldron featuring Christian Burchard ‎– For Eva, Disconforme SL).

“With Amon Düül we had already explored the new psychedelic music, but we wanted to do it in a different way, using more the free improvisation and the new rhythmic and harmonic structures”

Can you elaborate the formation of Embryo?

Mal Waldron was a big influence to me. I had played his great compositions before I met him and soon I managed that also with Dieter Serfas and Lothar Meid who became members of his quartet. In 1969 he had to do long tours in USA so we thought about doing something else. With Amon Düül we had already explored the new psychedelic music, but we wanted to do it in a different way, using more the free improvisation and the new rhythmic and harmonic structures that we learned from Mal Waldron. Our early sessions had musicians from different scenes, like Peter Michael Hamel (he later formed Between) who was communicating with John Cage, Steve Reich, and the contemporary music scene. Edgar Hofmann knew all the Free Jazz or John Kelly, who came from the English rock scene, because he had worked with Alvin Lee (Ten Years After) in a group called Manchester United. Because Dieter Serfas was an important member of Amon Düül, I had to play the drums, all the other drummers we were using were too much into their style. The audience was quite shocked from our new mixture. We had lots of support from the young students who liked our sound and whenever there was a demonstration or a sit-in in that revolt against the ruling authorities we were called to play our music. One time when lots of people came to see what was going on, they came with buckets full of water and colour and put that into the audience. Nobody could escape.

In the early 1970’s you started recording Opal. How did you get signed to Ohr? What are some of the strongest memories from recording and producing your LP?

Rolf Ulrich Kaiser heard about our activities and asked us to produce an album for his Ohr label. We didn’t have much time for that. The recording was done in two days in a studio for Film Music. Fortunately we had Julius Schittenhelm who was one of the Embryo’s founder and who had experience how to put new music on tape. He had worked in New York in the Andy Warhol scene but he is better known for his singing and guitar playing. Everything was done very spontaneous. John Kelly was very proud of his Gretsch guitar and amp, Ralf Fischer used a Fender bass and amp and I was drumming on a Ludwig kit. Actually there was another idea for the cover design but Ohr had the artist Reinhard Hippen booked for many of their upcoming albums. I don’t know how many copies were made. 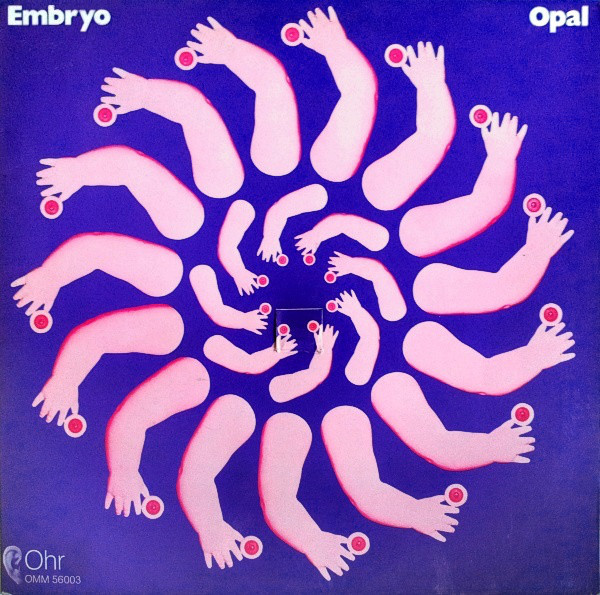 Embryo’s Rache showed the fantastic keyboard artistry of Jimmy Jackson, with whom I had played since 1966. 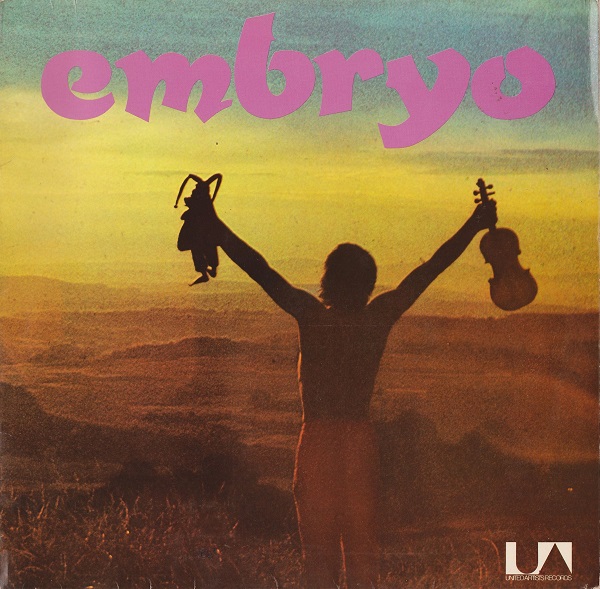 He invented some of the funky basslines. On many tracks we first recorded just him and me on the drums. Three tracks are in 5/4, a quite unusual beat. In the studio we discovered a mellotron and the way Jimmy Jackson was using it was sensational. Steig aus was done in the same studio, almost the same lineup plus the genius of Mal Waldron who had a super communication with Jimmy Jackson. Rocksession was done immediately after Father Son And Holy Ghosts and had Sigi Schwab and Dave King in the lineup, who were with Edgar Hofmann and me in our live band. 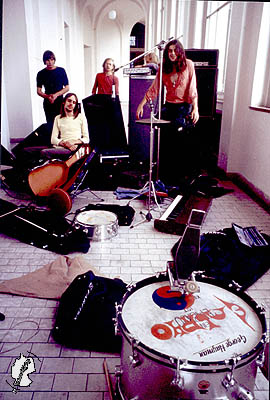 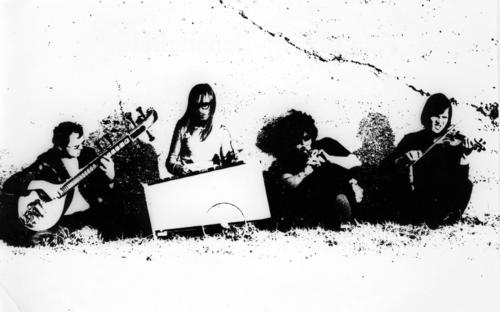 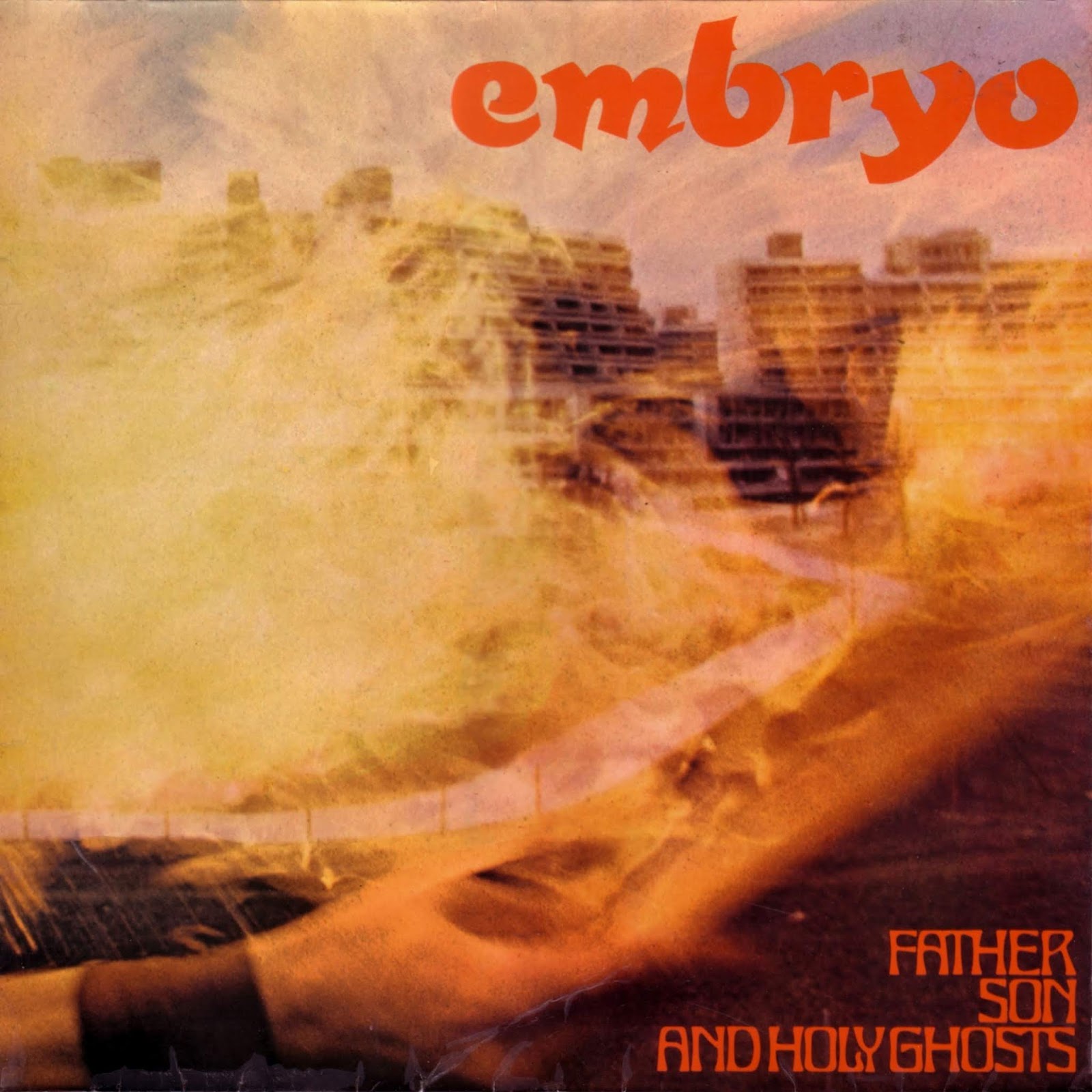 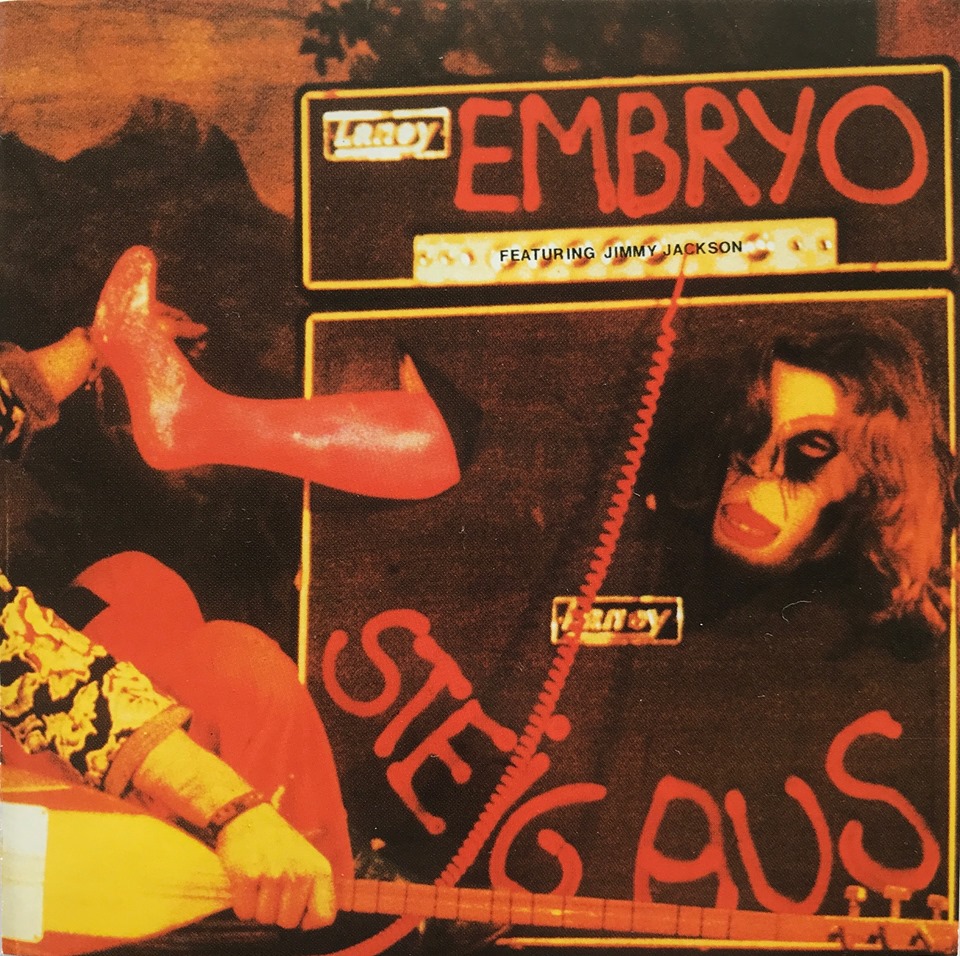 Rocksession and We Keep On was released in 1973. Your style changed. Embryo’s Reise followed in 1980.

Rocksession was a bit like Steig aus because of the fantastic organ player Jimmy Jackson and the musical architect on the electric piano Mal Waldron.

On Steig aus you can hear for the first time Roman Bunka, who had done some overdubbing guitar work. He helped me to keep Embryo going, because the others had left. Same with Dieter Miekautsch who became the main man on the keys. His left hand developed some of the ideas of Jimmy Jackson and he went further then anybody else. He could play a complicated bassline while improvising free or giving other rhythm patterns. 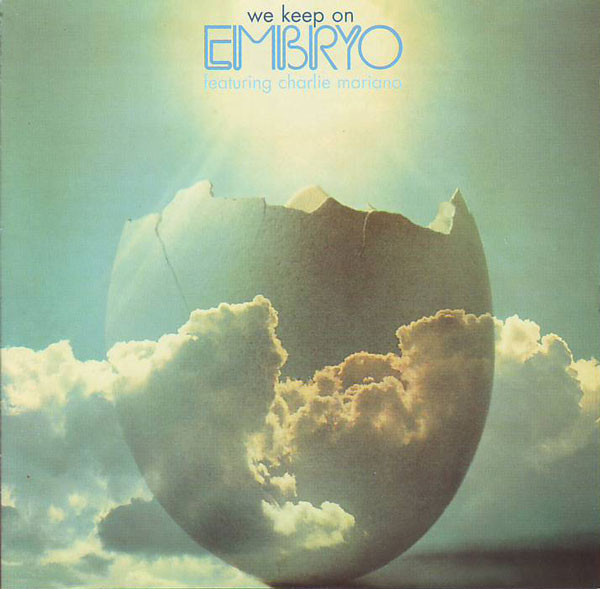 Roman Bunka started to explore the exotic string instruments like the oriental saz, oud or the Indian veena. We keep on with that unique trio. Also a hit on We Keep On, the work of jazz giant Charlie Mariano who liked our way of improvising and joined us whenever he had time. Embryo’s Live and Bad Heads & Bad Cats are other results of this combination.

“Even the war could not stop our caravan.” 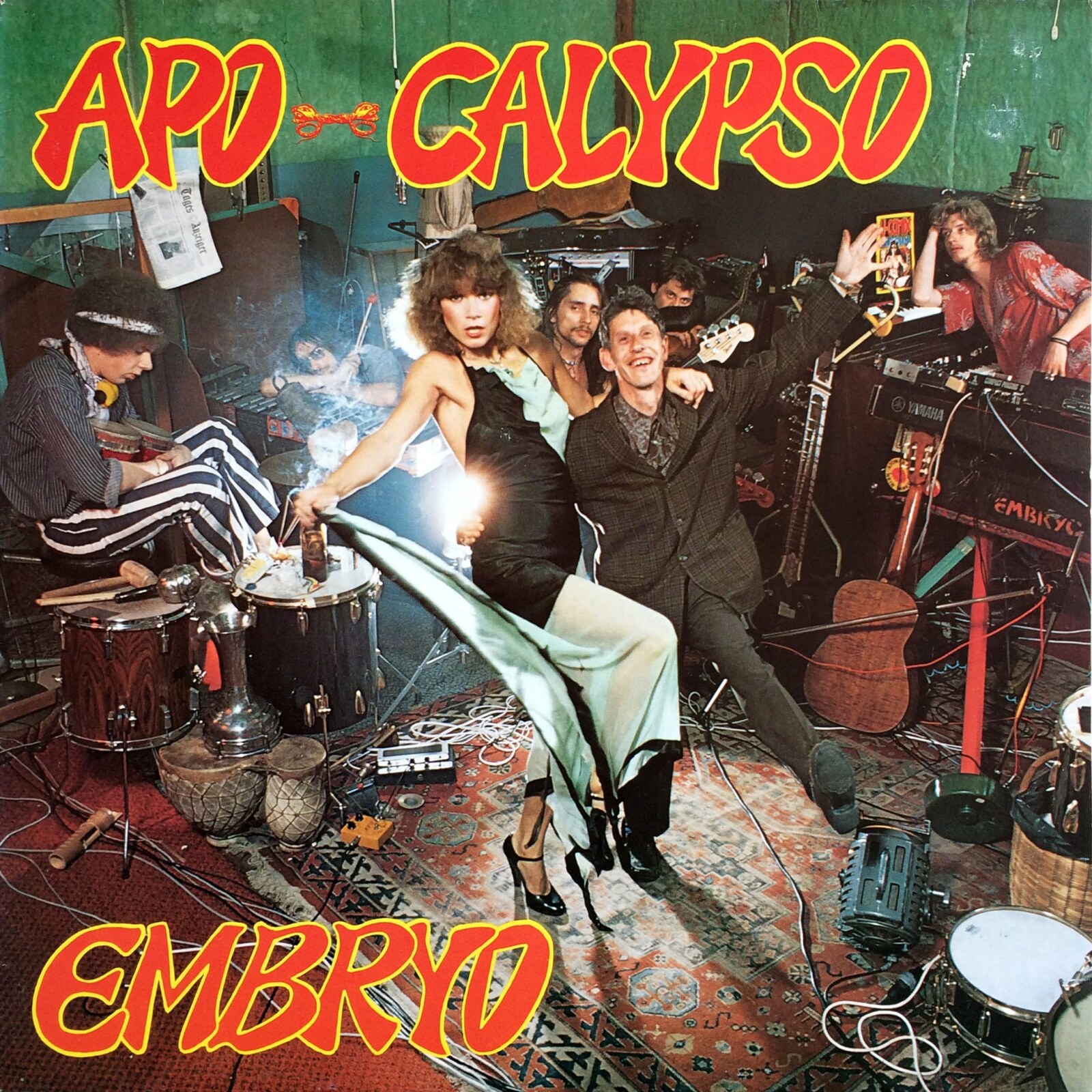 Apo-Calypso was the debut of the band that traveled to India. This journey had a strong influence on all of us. Almost a year on the road, in Iran and Afghanistan even the war could not stop our caravan.

Everywhere we’ve met great musicians, we have done adventurous sessions and have been able to record some of it and document all that in a film. Embryo’s Reise is a view on that.

September 6, 1970 we were booked for an open air festival in the north of Germany where also Jimi Hendrix was on the program among other famous groups like Canned Heat, Faces & Rod Stewart, Ron Wood, Ginger Baker’s Air Force, Sly & the Family Stone… 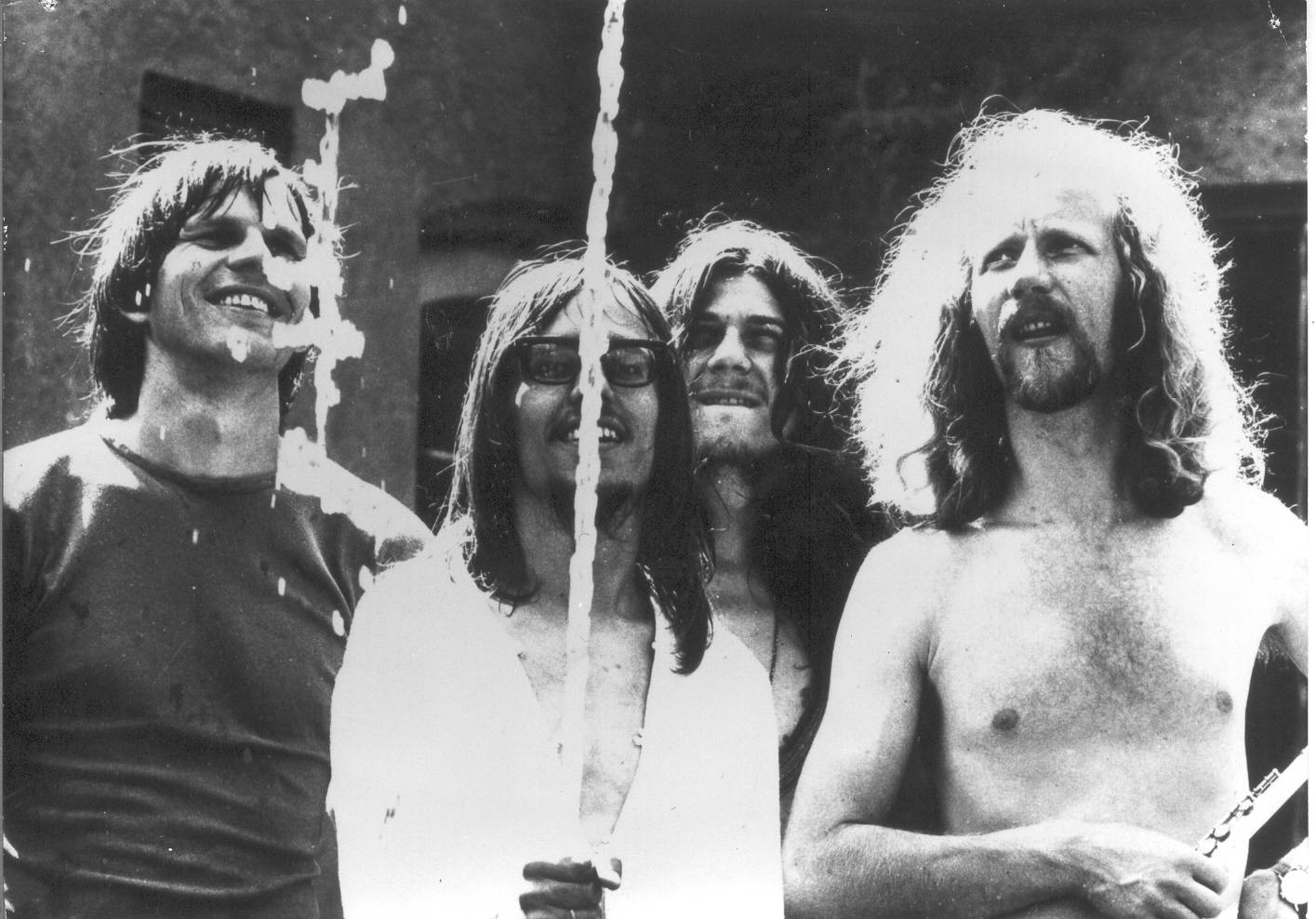 We arrived there at night and some Hells Angels were standing at the entrance controlling the tickets. They were beating the people that wanted to get in. About 30000 were already inside. The organisers had hired the rockers to control and they turned it into a chaos. Thankfully we met Alexis Korner who helped us to get a place to sleep. Next day around noon we were told to put our instruments on the stage.

When we were about to put instruments on the stage, a Mercedes limousine came with Jimi Hendrix. He was supposed to play the night before but he did not like the rain. Now the sun was shining so he decided to play with his trio (Billy Cox and Mitch Mitchel) before us. One of the rockers opened the car door for him holding a knife and stayed all the time there till he finished his great long set. We played after him with good vibrations but when we started to move our gear in our tour bus the rockers started to get completely out of control. While Ton Steine Scherben were playing they started to set the stage on fire. Everything turned into a nightmare. We hurried to leave that weird place. The check we had received from the organisers was not valid. When we went back to Munich after playing some more concerts on the road we heard on the radio that Jimi Hendrix had died. So that happened to be his last big concert.

The 80’s brought back Dieter Serfas who shared the tour to Nigeria and stayed since then with Embryo. In black Africa we played with unique drum masters and with Fela Kuti. Beginning of the 90’s we toured Japan with Chris Karrer who had joined us some years before. Then we started to step into the music of China because a multi instrumentalist from there had moved in our house and enjoyed our audience with his strange instruments like sheng and erhu, Ni Hau was the introduction of this new step. Also steady members since then became Lothar Stahl (whom I know since the middle of the 70’s) playing the microtonal xylophone beside his rhythm work, and Jens Pollheide, a fantastic bassman beside his master work on all kind of flutes. 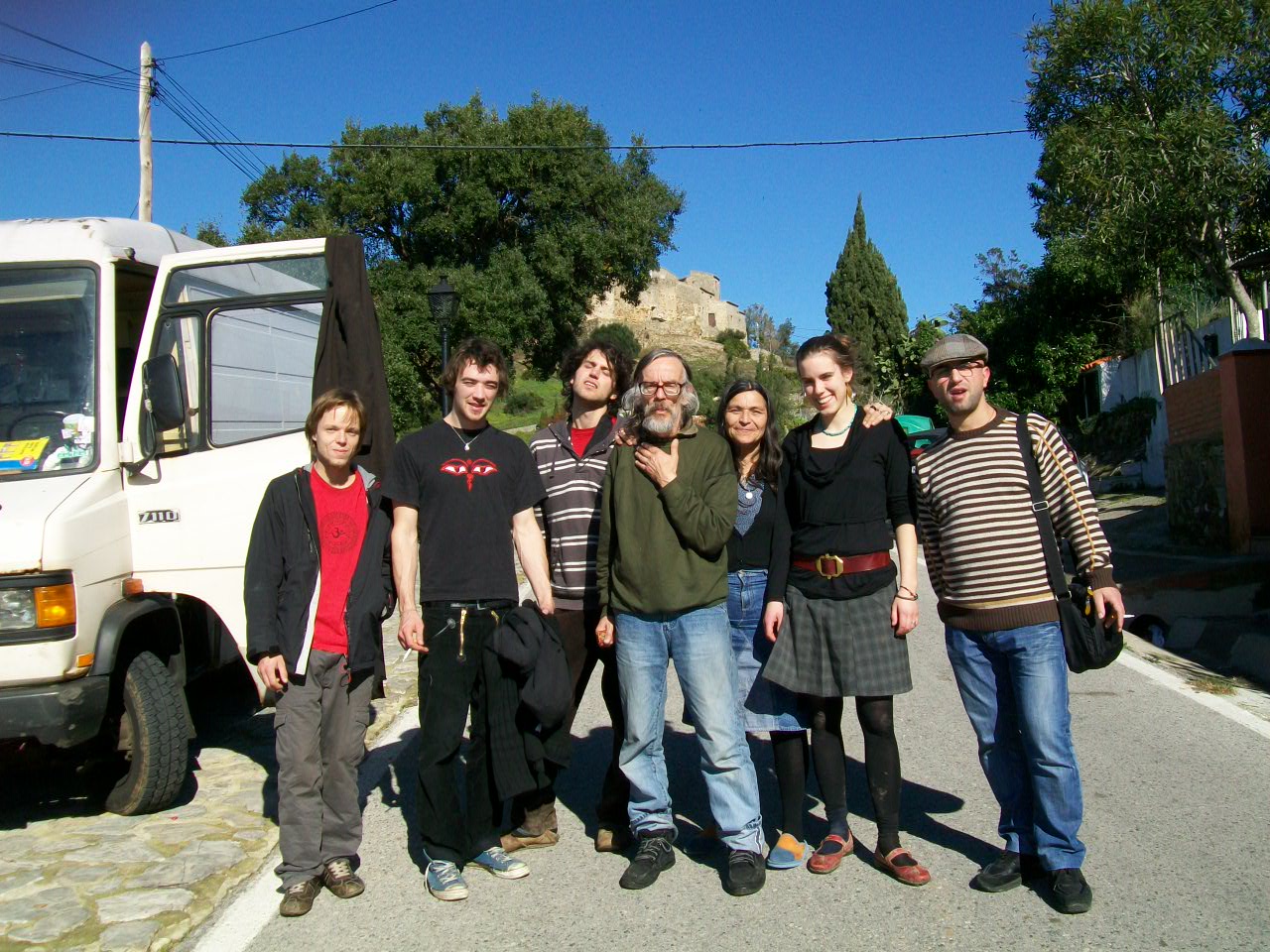 Your latest album Freedom in Music has been recently released.

Freedom in Music is a view on our many live activities that seem to be the spring of our art. Like the albums before (Tour 98: Istanbul – Casablanca, Live 2000 Vol. 1, Live 2001 Vol. 1, Hallo Mik) it offers tracks of the many live performances that Embryo is doing almost non stop. 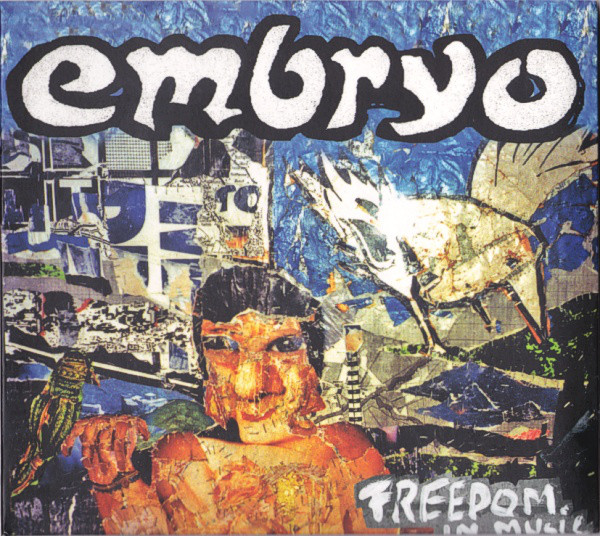 Many artists you can hear there we have met while being on the road. 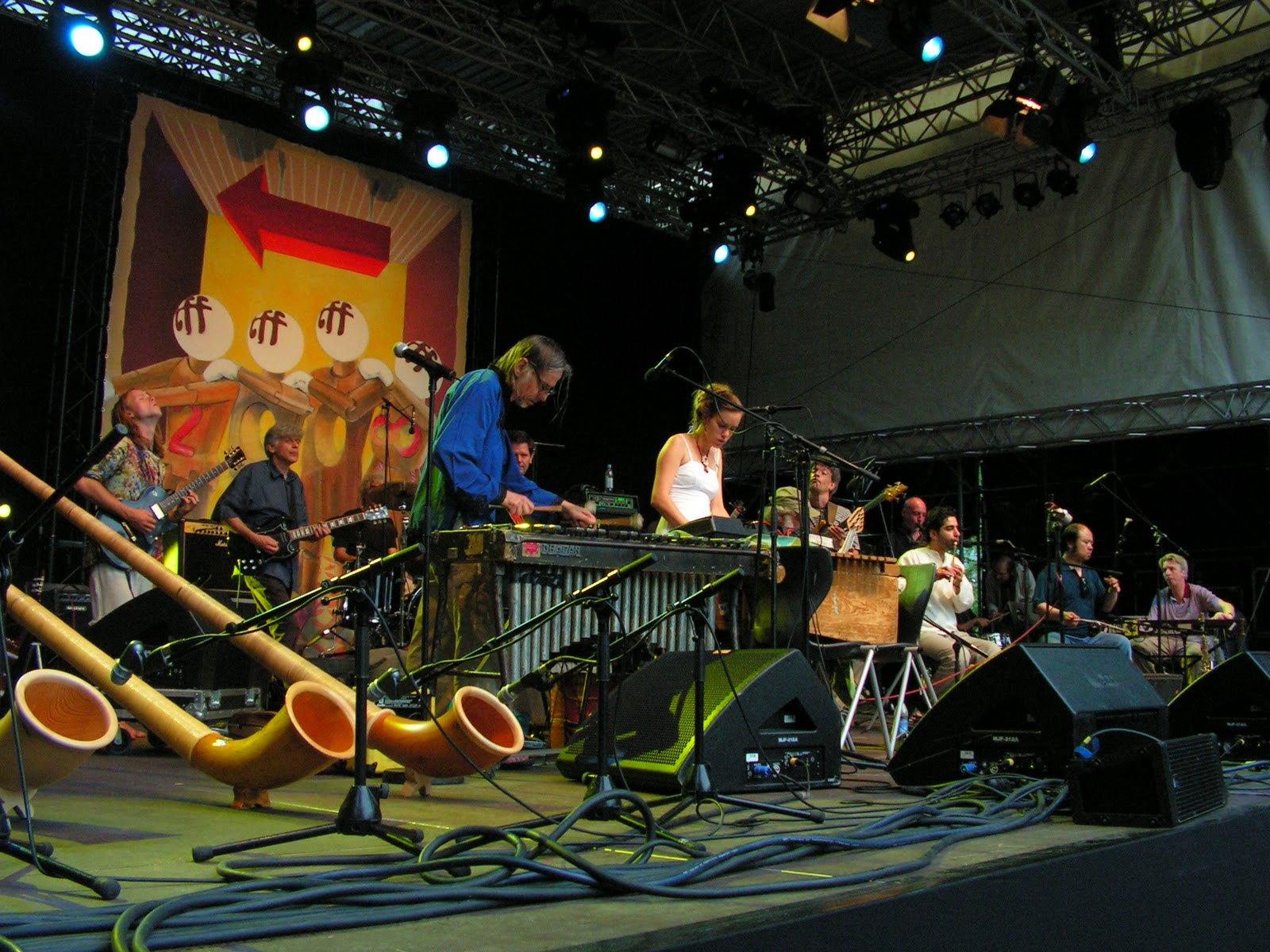 The album Hallo Mik was a presentation of our singer Mik Quantius, who is now more then a decade with us. Since many years my daughter Marja (26) is playing marimba, trombone and drums in Embryo. 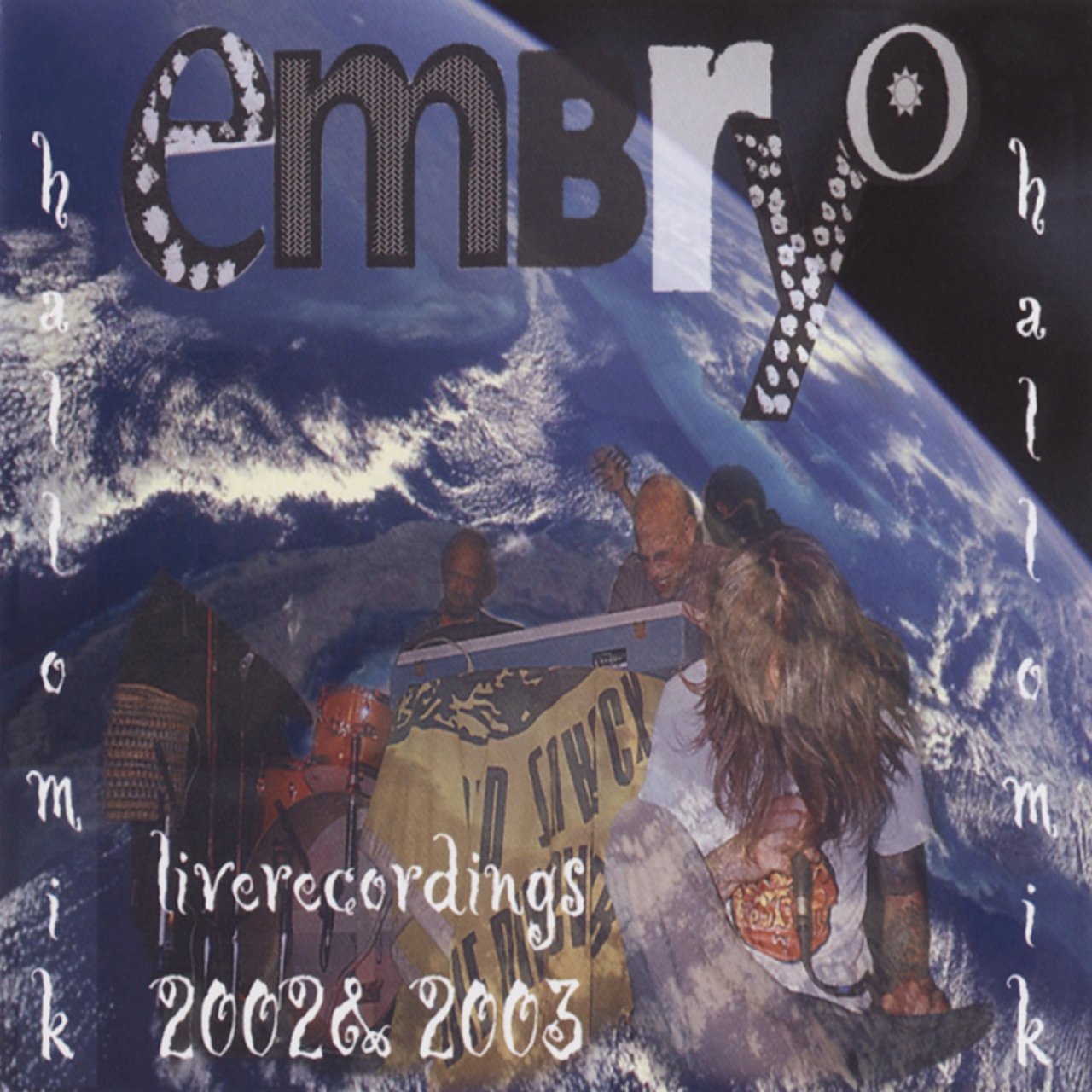 It’s about time to present her point of view on the album, … we are working on that. Beside that, there are projects coming up like the beautiful collaboration with the Mishra family from Benares (India) that we are doing successfully for four years now. This year was happening the 8th Free Flow Festival in Kassel. 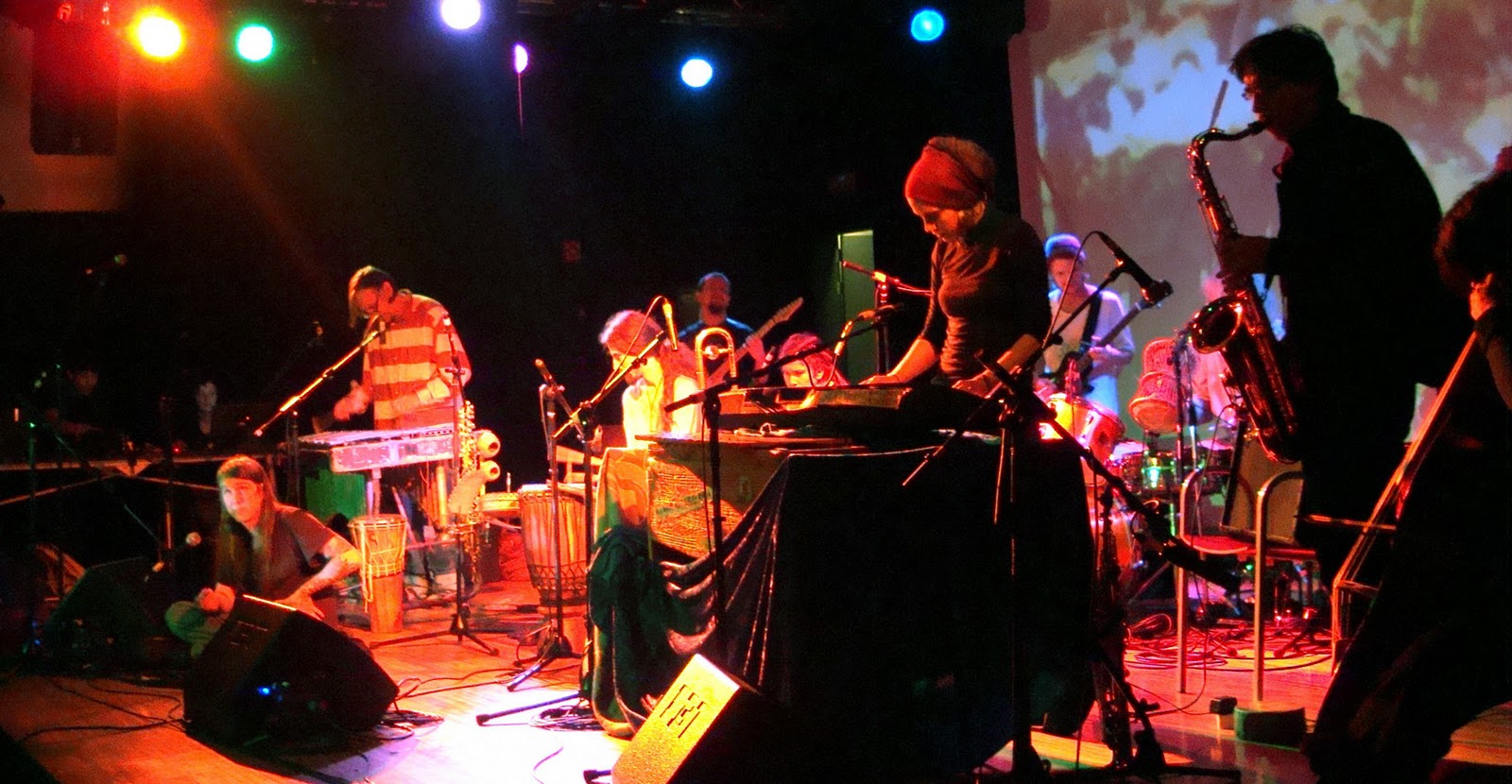 It’s a new movement to bring together free improvising groups of all styles. (In 2009 there was Carangi or Salamandra from Slovenia there). We are part of that and are organising a Free Flow open air festival in August 2012.