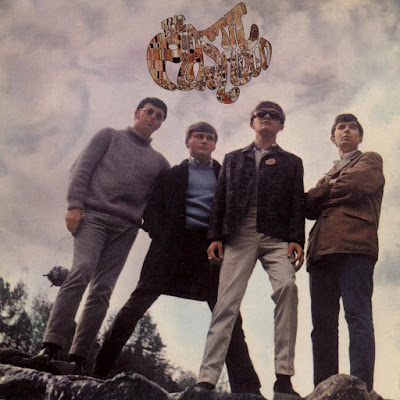 The Plastic Cloud have much going for them, so considering the band just one of so many softer rock outfits from the mid 60’s would be a mistake. With but a solitary album for the group to be remembered by, they gracefully bridged that gap between folk rock, garage and psychedelic far better than The Byrds, whom they were deeply influenced by.
Laced with sonic layers of fuzzed out chords, backed by steady rolling percussions and supported by a solid bass line, The Plastic Cloud could be very experimental, unafraid to venture off into uncharted realms filled with superior instrumental harmonizing and innovation, deeply impressive lyrics (often socially so), all balanced with a keen sense of spirited self awareness. Simply listen to the resoundingly beautiful and ghostly haunting “Art’s A Happy Man” and feel a shimmer from a distant time move up your spine.
Bearing almost no resemblance to what was currently taking place during those heady warm nights, Plastic Cloud were nearly one of a kind, filled with lysergic charm; were had they chosen to locate themselves in areas such as New York City, Los Angeles or of course San Francisco rather than Bay Ridges, Ontario, the fickle hand of obscurity may have easily passed them by. Needless to say, it’s impossible not to be swept away with this dynamic dialectic outfit, a band who’s sound is as fresh today was it was when released in 1968 … and if one didn’t know better, they could easily be mistaken for one of those riding the current neo-psychedelic wave.
If Plastic Cloud made but a single mistake, it was that they divided their album into two sides, one laced with their splendid soft flower power songs, and the other with their more psychedelic numbers, which had serious listeners feeling that they were perhaps trying to be all things to all people, where it might have been better if they’d simply interwoven their material to be all inclusive and more conceptual in its nature. Regardless, it’s a shame that Plastic Cloud didn’t manage to linger a bit longer and didn’t receive a better response, as who knows what shimmering roads they might have ventured listeners down on future albums.
*** The Fun Fact: The name ‘Plastic Cloud’ was taken from the silver helium filled cloud balloons or pillows that were released from Andy Warhol’s Silver Factory back in 1966.
The original album, if you can find one, now trades for well over $1000. I remember I had to order my copy though the mail with a $3.00 money order from the Post Office.
– Jenell Kesler
© Copyright http://www.psychedelicbabymag.com/2018
From The VaultJenell KeslerReviewsThe Plastic Cloud