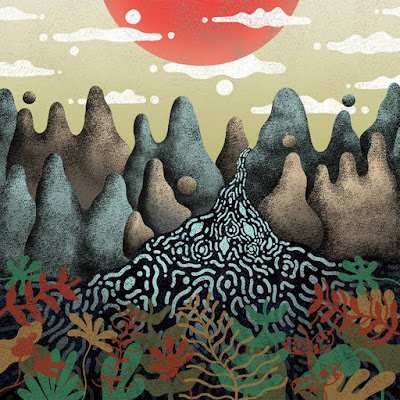 Astrodome – II (YaYa Yeah, 2018)
https://yayayeah.bandcamp.com/album/ii
Astrodome is a four piece instrumental band from Porto, Portugal. I really loved their debut and have been waiting quite a long time for this one to arrive. The vinyl is still not out (a long story) but the digital version and cassettes are!
The album features six tracks and was recorded at the northern Portugal studio, Hertzcontrol, used by a lot of the Portuguese bands in the scene, including 10000 Russos. It was mastered by Jonas Munk (Causa Sui). It starts off with “Mirage”, a slow keyboard fade-in (by new member Kevin, who also plays guitar) and then the melodic guitar kicks in as the track slowly builds. There is some very nice dual lead guitars with a lot of melodic parts intertwined in a very nice way as the drums and bass keep the momentum going. The track comes down and there is a short keyboard solo with some really nice drumming. The track builds up again as it started. Nice reprise and ending. Great opening track. “Secular Fields” features about the same tempo along with some slide guitar and a really ripping lead solo. I just got transported away on this one. “Dawn Gardens Part 1” finishes side A of the tape with beautiful melodies and dynamics. I just love the way the two guitar players interact on the tracks. “Dawn Gardens Part 2” starts side B with another slow fade-up with just the guitar and cymbals before the rest of the band kicks in for one of the more heavy numbers on this album. “Sunrite” is in a quite different mood. Slow steady drum and repeated guitar line as a theme slowly develops and then when you think it is going to peak, it dies down and a new guitar riff kicks in and new direction begins. A bit of the stoner rock feel and heavy doomy stuff that was on a few tracks of the first record appears later, but the nice organ really compliments it well. “Atlas” ends this excellent record. It reminds me a lot on Causa Sui! One of my faves in 2018, please check it out if you like instrumental music.
– Scott Heller
© Copyright http://www.psychedelicbabymag.com/2018
AstrodomeReviewsScott Heller