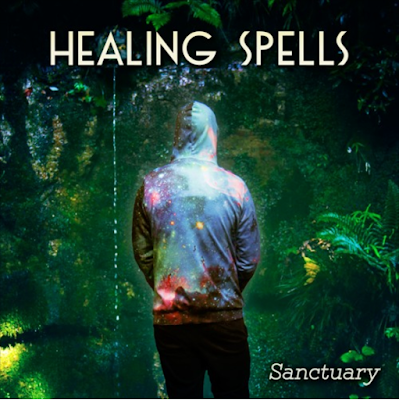 Healing Spells – Sanctuary (Self-released, 2018)
Healing Spells is back with an EP chock full of extraordinarily breathtaking IDM. There’s bits of Oneohtrix Point Never, Dan Deacon, and Björk wrapped up in this one. Mutilated sound bites seem to erupt and collapse from all corners of the periphery. Melodies pop in and out of existence like subatomic particles. And yet its miraculously not atonal. Rather than crumbling into noisey neo-psychedelia, each track remains a labyrinth of harmonies.
“Disciples” stands out as an installation in and of itself—an experience meant to be singularly imbibed. As the opening track, Healing Spells launches into the EP by articulating its environment. As we listen, sonic rainforests sprout up and outward. The flora and fauna of this soundscape is revealed in hues of ecstasy and self-actualization. It’s a paradoxical party, and we’re invited.
In establishing the textures of the world around us, “Half Animal” stands out as a collage of doctrines. This is the music of an alternative civilization, a place where humanity gels with machine, and machine gels with ecosystem. Vocal samples are stretched out and spliced with looped buzzing. Any recognizable language seems to be bent over backwards and turned inside out. A conversation is engineered as contorted voices play a game of call and response. With every new increment of the discussion emerges a newfound layer of texture. The track exists in a perpetual state of ripening, something that can only be described as blissful repose.
This world-building is a definitive trait of all acclaimed IDM. It is perfected through textural layering, manipulation of normal acoustics, an unfathomable amount of creativity, and many more elusive skills. It should suffice to say—it’s not easy. And yet, Healing Spells has soared above expectations. Not only is this one of the Tokyo-based artist’s best works yet, it poses a legitimate threat to other IDM artists rising in visibility.