‘A Broken Heart Would Be Lovely’: Skip Spence and Oar

‘A Broken Heart Would Be Lovely’: Skip Spence and Oar 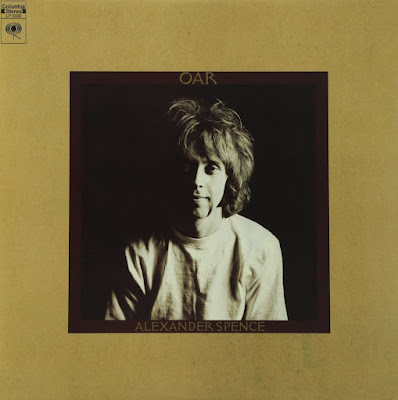 In December 1968, a young Californian musician walked out of a Nashville recording studio for the last time. Having applied the finishing touches, the slight 22-year-old’s first and final solo album would be released the following year to near-silence. One of many low-budget, quick-fix LPs released in the dying days of the 1960s, it even went on to the rather embarrassing feat of being (for some time) the worst-selling LP in Columbia Records history.

For years afterwards, this young man’s album was condemned to a humiliating, drawn-out death in the bargain bins of thrift shops and dollar stores. But awaiting those lucky few that salvaged it from the back shelves was a record of surprising beauty and true musical honesty.
Everything about this album is strange – its cover, for a start. Without any of the self-consciously fantastic images of its contemporaries, it almost has the appearance of a wild-west wanted poster: a central black-and-white photo of a half-shadowed face, bordered by a sandy sepia backdrop and printed in block, distinctly un-psychedelic lettering: OAR – ALEXANDER SPENCE.
For those lucky few, this name was almost certainly not familiar – but it so easily could have been. In the burgeoning Haight-Ashbury scene, Spence – known to his friends and fans as ‘Skip’ – had a reputation as a promising songwriter and a consummate rhythm guitarist. He was even an early member of the pioneering bands Quicksilver Messenger Service and Jefferson Airplane, taking the drumming stool on their first LP, Jefferson Airplane Takes Off. But after taking a trip (in more senses than one) to Mexico with two girlfriends and missing a gig, Skip was fired by the band. Just months before Grace Slick joined and the Airplane went on to rock immortality with Surrealistic Pillow and their 1967 singles, Skip had to leave the gravy train early.
Yet perhaps the greatest missed opportunity of Skip’s short career was his subsequent project, Moby Grape. Backed by five capable singer-songwriters and an unbeatable live act, the Grape combined Dead-like acid jamming with a three-guitar pop wall of sound that fused Beach Boys harmonies with blues and fingerpicking folk. With all the odds in their favour, the hopes of these young men were dashed by a level of managerial and commercial ineptitude that would be amusing if it weren’t so real.
Despite these career failures, Spence was still the same old Skippy: ‘a little Buddha’ genuinely committed to peace, love and the utopian ideals of hippiedom. Heading to New York to record their second album, Moby Grape and Skip could hardly have anticipated the changes to come.
Details are thin on what really went down in New York, but it seems that Skip started hanging around with a dodgy Aleister Crowley-style psychedelic cult. A female figure is a constant in the accounts of his bandmates: a never-identified “black witch” with whom, under the influence of “lots of psychedelics”, Skip began venerating a “70-year-old street guy they called ‘father’”. Yet the mind can only take so much. After what one can assume was one too many tastes of the occult-lysergic sacrament, Skip had a full-blown psychotic break. Believing himself to be the anti-Christ, he set off to murder his bandmate, drummer Don Stevenson, in his hotel room. Axe in hand and “sweating like a son of a gun”, Skip made quick work of the door before being forcefully restrained on the floor and arrested.
His life was never the same.
The one usual consolation of a bad psychedelic trip is that, no matter what the drug-ravaged mind supposes at the time, ‘it will end’. But Skip’s bad trip, which already sounds far worse than most, never really ended. His mind shattered, ravaged by delusions, hallucinations and persistent rumination on axe murder and divine judgement, he was diagnosed with paranoid schizophrenia and committed to the notorious Bellevue psychiatric hospital in New York, where he soon set to work.

One can only imagine the harrowing scenes in which Oar was born. Holed up in a sterilised, white-walled room and surrounded by maniacs, Skippy strummed and scribbled away under an oppressive chemical cocktail of anti-psychotics, anti-depressants, tranquilisers, downers and leapers. It’s surprising that he could even function at all. Thorazine, one of the drugs Skip was dosed with daily, has the famous side effect of the ‘Thorazine shuffle’: the unmistakeable, semi-stoned lurch made by psychotics and schizoids under its lethargic, analgesic spell.
On the face of it, then, it doesn’t sound surprising that Oar has gained a reputation for being ‘crazy music’. In fact, that’s exactly how his record label promoted it in a shameless advertising campaign in 1969. But the reality is far more subtle. Oar is not the rantings of a deranged lunatic, communicating nonsensically from the other side. Its lyrics generally make sense and, in places, show more insight (should I say sanity?) than most songwriters could ever dream of; its rhythms are certainly unusual, but they are ordered and stable; and its melodies, the gems of the album, are meticulously and beautifully constructed. 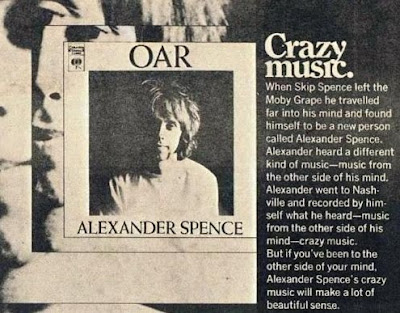