Recently, bassist/vocalist Jem Targal, of the late 1960s/early 1970s Michigan power trio, Third Power, shared his memories of the life of the high octane band who arose from the same scene as the MC5, the Stooges and SRC among others as well as his post-Third Power projects.

When and where were you born? Did music play a big part in the Targal household?

We had a Baby Grand Piano I was playing at “3” years old … I’d play and repeat patterns my Parents liked and were impressed by … I was playing “Violin” by the “3” Grade at home and at school … my Parents bought me a 1/2 size very *Toney* “Violin” … “lots” of classes and lessons thru the years led me to play in “Orchestras” thru Grade School and High School leading me to become part of the “Northwest District Orchestra” while in High School … Pretty *Cool* … “””Lots””” of ***Music*** !!! … I also sang in the school *Choirs* … I had a “Large” vocal range … I’d be playing in the Orchestra then run up to sing in the Choir then back to the Orchestra … *Nice* …

What kind of gear did you start with?

I started Playing Guitar at about “15” it was some kind of Acoustic … My first *Electric* was a turquoise “Silvertone” (Sears) and a small practice amp that I put a “PA” horn on … sounded ***Coooooolll*** !!!

How old were you when you joined your first band and what was the name of the band?

What kind of music did the band play? Who were your major musical influences?

When and where did you and Drew meet? What was the circumstance of the meeting?

Drew and I met at “Oakland Community College” 1965 / 66 (the first class of “OCC” Auburn Hills Campus) in the “Speed Reading” class he was the room monitor … we got talking about everything … then got around to *Music* & *Art* … we even started doing drawings on the “Blackboard” as we talked … when Drew realized I had played “Violin” for “10” years he said “””I bet you’d be really *Good* playing “Bass” guitar “””… Drew had played Drums for years and was switching to “Guitar” … ***Funny*** Drew had the same turquoise “Silvertone” guitar that I had … I started learning to play Bass on mine then finally got a “Kingston” Bass ….

When did Third Power first unite? What was the musical scene in Detroit like at this point?

Lots of High School Gigs for Everybody … Hideouts, Crows Nests (we did a Gig there at the “””Crows Nest East with the “MC5”) … “Silverbell” – “Something Different” and a “New” club was starting to do shows in “Detroit” called the ***GRANDE BALLROOM*** !!!

How long was it before you guys played your first gig? Where was the gig and did you share the bill with any other band?

We played at an “Eagles” club in “Troy” where we kinda got the reputation for making any amp sound “10” times louder” than it actually was … I think it was actually because we played SOOOOO HARD it just sounded like that !!!

Who were Third Power’s major influences?

I still remember Drew coming to practice one night after finding this new album of a group called “CREAM” … being a “Trio” we just went *WOW* … then here comes another “””New””” album … *JIMI HENDRIX* … ***AMAZING*** … We loved that three guys like us could make sooooo much happen musically … it confirmed we were on the right track !!!

Did Third Power always play original songs or did you do some covers? If so, what were the songs you covered?

What was the first original song written by Third Power? Who wrote it?

What was the band’s writing process?

Drew or I would come up with a song and bring it to rehearsal then we’d arrange it as a *Group* and put our !!! *SIGNATURE* !!! on it … ***Fun*** … I still remember *Jim Craig* coming to rehearsal with a Tune called “THE HUMAN CIRCUS” it was ***AMAZING*** … We all arranged it adding our touches here and there … It had a really cool “””Jammin””” Instrumental in the middle … with a *Jazzy* vibe to it *Jim* being a *Jazz* Drummer and all … I was Proud to be singing *Jim Craigs* Tune … it was Really Coooooolll to play ” THE HUMAN CIRCUS ” at our *GIGS* !!!

How did Third Power get the single “We, You, I” b/w “Snow” issued? Was it a one off contract? Who was the contract with?

Our Manager Lloyd Edwards and Bill Baron created “Baron Records” so we could begin recording !!!*THIRD POWER*!!! Music … we recorded “4” songs at “United Sound” in “Detroit” ( Motowns Studio) … the other ones were “Hear What I Say” – “Say How I Feel” … Still have the Original Acetates of those !!! 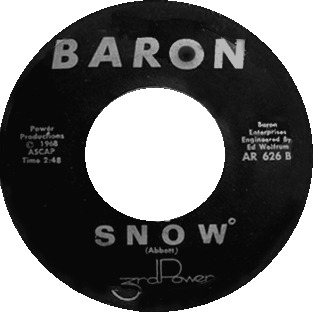 How many copies of the 45 were printed? How was the single marketed?

How were sales of the single? Did the labor help promote the 45?

What venues did the band play during 1968 and 1969? Who were some of the bands you gigged with during this period?

How did the contract with Vanguard Records come about?

How long did it take to record the LP “Believe?” Where was the album recorded?

Can you describe the sessions? Who was the producer?

Sam Charters was our Producer – http://en.wikipedia.org/wiki/Samuel_Charters … He really liked working with US and we were the only band he ever invited to his home for dinner when we were in New York recording our album … he played us some amazing recordings he had done when he was younger … he’d go out and record music at clubs on his Reel to Reel … he played a Live recording of skip James doing “I’m So Glad” he had recorded … ***Coooooolll*** … plus he Played the Piano on “Passed By” … he had never played on any other bands record before … he really liked “””PASSED BY “”” and he *Loved* doing it !!!. Recording in NY,NY was a *Grand* experience for us young !!! “DETROIT”!!! Musicians … we got tickets for “HAIR” from “Vanguard” got to ride “Subways” – fell over looking at all the TALL Buildings … *Groupies* from the “””CHELSEA HOTEL””” … and ***Recording*** a “Major” “Professional” album Together !!! ***NICE***…… We decided to add something different to “Won’t Beg Anymore” that we hadn’t done before … a *Party* sequence … Sooooo we went out on the streets of NY and asked people if they’d like to be part of an album … we had set up mikes in the studio … and about “20” people came in and we all got drinks and got loose together and recorded the “New” part for “Won’t Beg Anymore”… besides the tunes that ended up on “Believe” we recorded “Jam in D” which was one of our “Heavy” *Favorites* – “Hey Little Suzie” a tune where all three of us started out playing drums … then Punched out the tune !!! “Hey Little Suzie” !!!… *AWESOME* … We had planned to record the full version of “Little Drummer Boy” for a “Second” Album … but there was enough space left so we decided to record a preview on “Believe” … we were one of the first bands to do a Traditional Christmas song !!!*ROCK*!!! Style … as Christmas is an all year message – we played “Little Drummer Boy” at all our shows … The engineer “ED FRIEDNER” was ***EXCITED*** he was going to be able to use all the “New” “Psychedelic” techniques he had learned … for !!!*THIRD POWER*!!! ***MUSIC*** 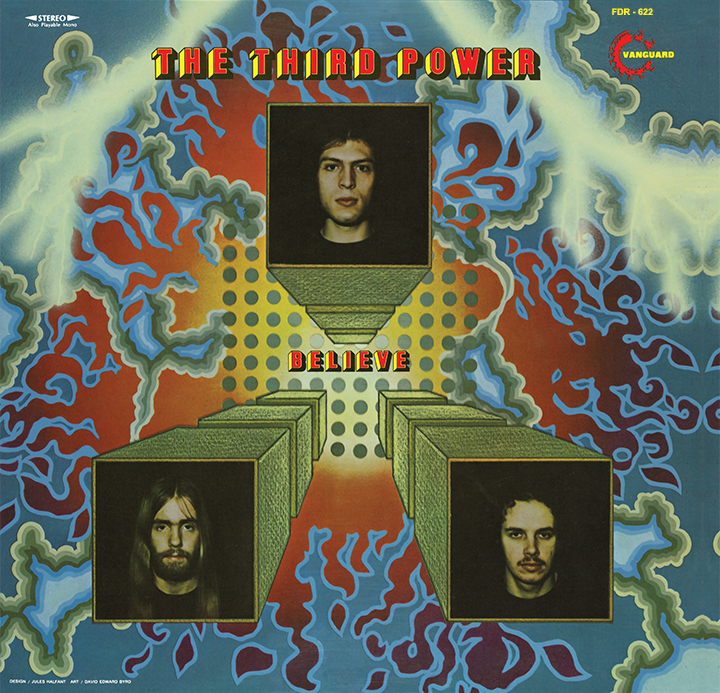 What kind of gear (guitar, bass, amps) did you use recording the album? 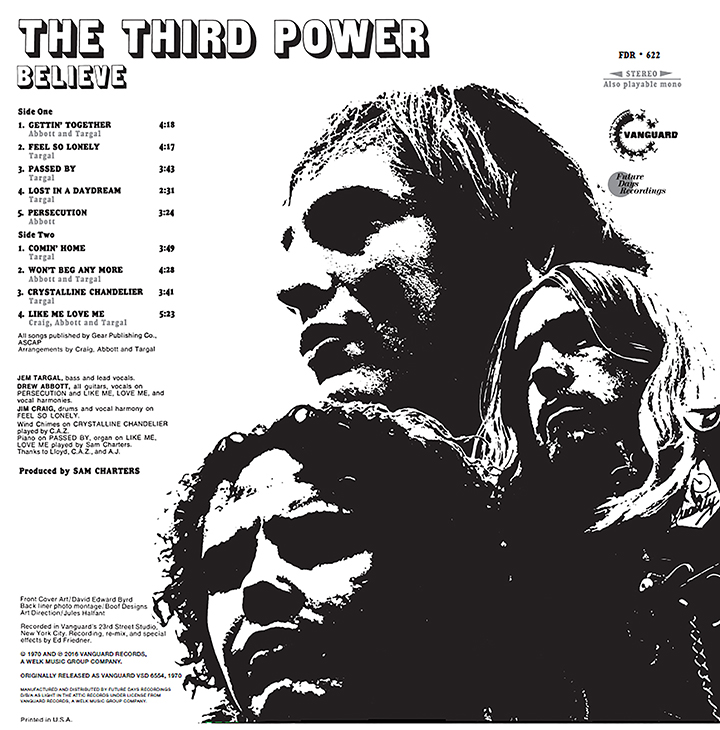 How many copies of the LP were printed? Was the album promoted by Vanguard? How were sales?

I Believe they made “30,000 “BELIEVE” Albums … they sold *Great* in “Michigan” and “Florida”. But “Vanguard” dropped the ball on Promotion.

Where did Third Power play in its heyday? Who did you play gigs with? Did you play with big name Detroit bands like the Stooges? The MC5? SRC?

***Grande Ballroom*** – Procol Harum – John Mayall – Steve Miller Blues band – When we played with “””Iron Butterfly””” they changed their set around after they heard !!!*THIRD POW#ER*!!! play we had the 1st & 3rd set and they had the 2nd and 4th set … they moved “””IN A GADDA DA VIDA””” to their first set because they needed some “””Impact””” after our 1st ***ROCKIN*** set … – Lee Michaels – James Gang – Genesis – Savoy Brown – Teegarden and Van winkle – Keef Hartley – Colosseum – The Amboy Dukes – Frost – Frijid Pink – Brownsville Station – Sunday Funnies. 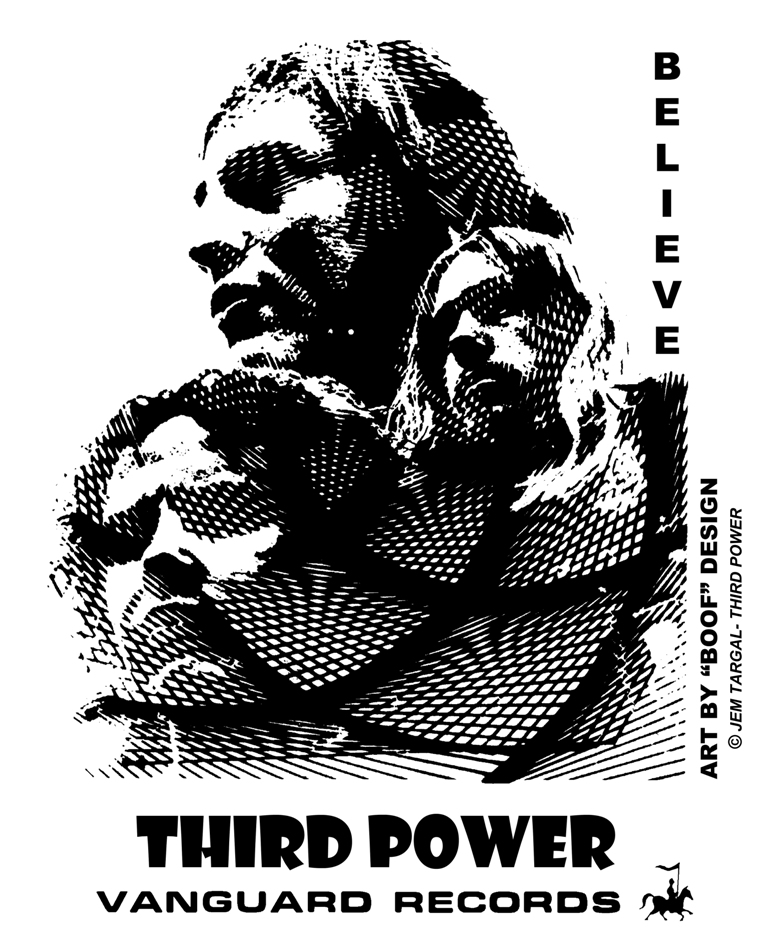 *** Meadow Brooke*** … All The Lonely People, Wilson Mower Pursuit, Savage Grace, Sky and !!!*Third Power*!!! played … I dedicated my solo tune “””HIDDEN AWAY””” to my *MOM* who was in the audience with my brothers … and one of my *Favorite* pictures of me playing was taken there and used on a POSTER of the show !!!

How long was Third Power together? When and why did the group disband?

Were any recordings done after “Believe?” If so, are there unreleased Third Power tracks that could be released?

When we recorded ***BELIEVE*** we also recorded some other tracks that ended up being part of the ***BONUS*** tracks for the “””LITA””” RE-RELEASE.

There have been numerous reissues of “Believe.” How many of these have been official and are you aware of any bootleg releases?

I thought they “All” were “Bootleg’d … except the “Akarma” “CD” … would love to get some *Royalties* … But I have been *Grateful* that “BELIEVE” has still been available to all the “New” generations of *Music* Lovers !!!

What was your most memorable Third Power gig and who did you share the stage with on that occasion?

What did you do musically upon the disbanding of Third Power?

It took a couple of years after !!!*THIRD POWER*!!! before I really started playing with a group again …

How did the recent reissue of “Believe” done by Light In The Attic come about? How did it feel when the project came to fruition with the Record Store Day release?

What were the sources of the bonus tracks included on the CD? How much more Third Power music is left in the vaults and are there plans for any further releases?

Is there anything you would like to add concerning the life of Third Power as a band?

If anyone would like to see some of the *ART* & MUSIC* I’ve done thru the years … here are some of my websites: …..

Thanks so much for sharing your story Jem. What an adventure! And it isn’t over yet!!