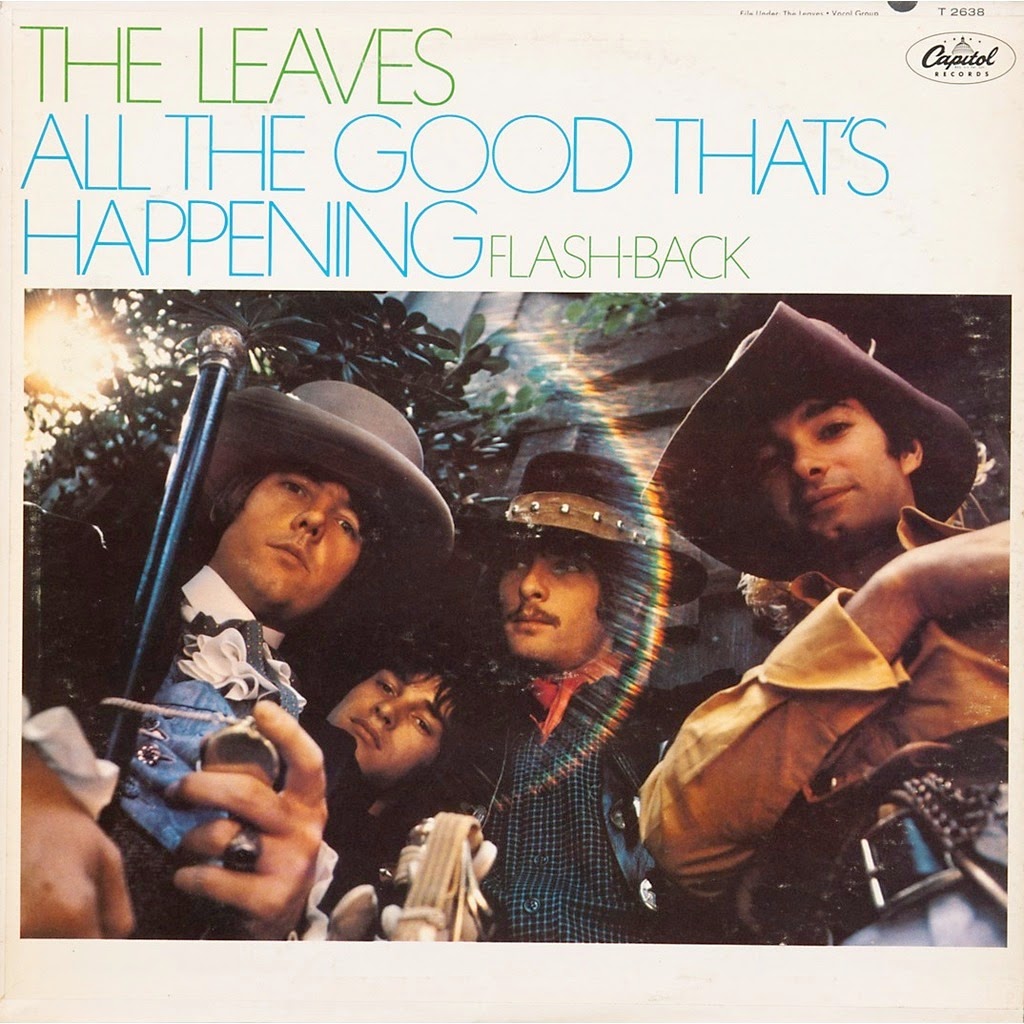 The Leaves “All The Good That’s Happening” (Capitol Records, 1967)
Adultery and murder is the theme of “Hey Joe,” which was written by Billy Roberts and became one of the most covered songs of the decade. The Byrds, Jimi Hendrix, The Shadows Of Knight, Tim Rose, The Cryan’ Shames, Love, The Stillroven, The Creation, and The Music Machine are just an slim mention of acts that tackled the grim narrative. But The Leaves achieved the greatest commercial success, at least in America, with “Hey Joe,” as their smoking hot version reached the number thirty-one spot on the charts in the early summer of 1966. Prior to assaulting the airwaves with the song, the Los Angeles band had already made an impressive name for themselves on a local scale and, now that they scored a heavy hit life looked mighty promising. The band’s debut album, also titled “Hey Joe,” proved to be equally invigorating with its mercurial menu of folk rock, garage grit, British Invasion styled sounds, and sonic experimentation.
Fired by youthful exuberance and a well-rounded repertoire of musical fashions, The Leaves, by all rights, should have turned into major stars. Despite the fact the band’s second and final album, “All The Good That’s Happening,” parented no winning singles and isn’t quite as potent as the first disc, the platter remains terribly underappreciated. Tracks such as the moody stupor of “On The Plane” and the ping-pong pulsations of “Lemmon Princess,” which carries a chaotic circus-like air, are decorated in psychedelic decals, while “Twilight Sanctuary” features some hard-driving harmonica blowing chained tight against giddy blues rock jamming. The band’s blues influences additionally prevail on honest recyclings of Jimmy Reed’s raspy-throated “Let’s Get Together” and Buffy Sainte-Marie’s candidly cryptic “Codine,” along with “Flashback (The Rhythm Thing),” a retooling of John Lee Hooker’s “Crawling King Snake” that morphs into an intense boogie woogie instrumental. A copy of Manfred Mann’s “The One In The Middle” weighs in as another blues based item, and “To Try For The Sun” is a stark and haunting folk ballad. Snapping guitars, compounded by strong and solid harmonies give the album a strutting garage rock edge, where smatterings of offbeat arrangements and curious effects zone in on the freakier side of The Leaves. To call the album trail blazing would be stretching the truth, but there are enough amusing and exciting ideas to keep listeners awake and interested. Personnel issues, paired with lack of promotion prevented “All The Good That’s Happening” to be heard, resulting in the end of a band that died on the vine (pun intended) way too soon.
Review made by Beverly Paterson/2015
© Copyright http://psychedelicbaby.blogspot.com/2015
Beverly PatersonReviewsThe Leaves