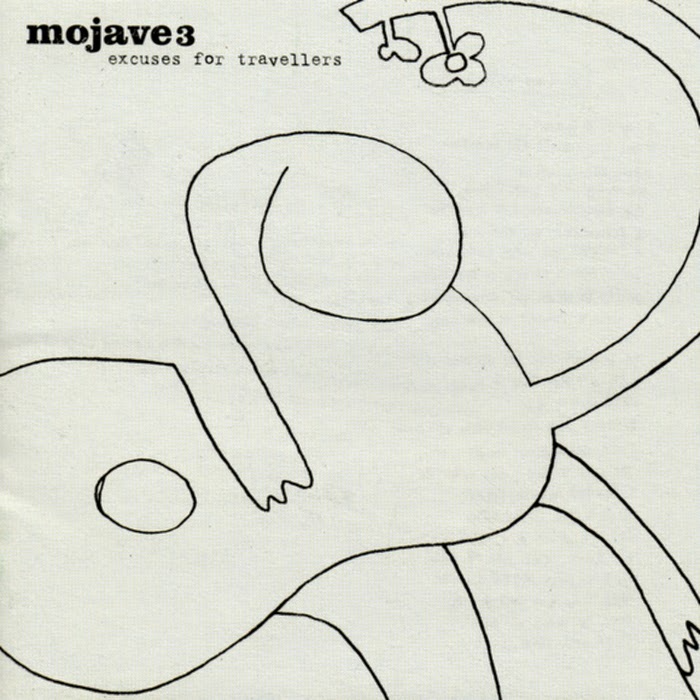 Mojave 3 “Excuses for Travellers” (4AD, 2000)
Many reviewers have dismissed this gem with a wave of their
hand, saying that in 2000 there were just too many of these atmospheric sheets
blowing in the wind, shrouding the listens with so much low keyed musical bliss
that it was impossible for people to do anything but breathe … being overly
intoxicated by the rapture.  And while
there may certainly have been a number of bands working in the genre of
dream-pop, hardly a one stood even close to Mojave 3, with the exception of
perhaps The American Analog Set.
If anything should be said for the release, it’s that Neil
Halstead again lays down most of the song writing on this their best album to
date, where the band crafts solid sleepy numbers that are as comfortable as
your grandmother’s bedspread, and equally as delicious as the smell of her
bacon and egg breakfast floating down the hall, scurrying your dreams to the
ceiling, and enticing you to wake in the half light, sitting at her enameled
kitchen table, wondering why everything seems better here, than at you own
home.  And if I have any concerns, it’s
to ask why Rachel Goswell isn’t featured front and center on more of the
tracks.
So … if you can dismiss tight simple graceful songs that
create a soundscape filled with enchanting characters that ride a like a
feather on a breeze, asking nothing of you, not even for your attention, as
they weave a hypnotic magical spell of distant romantic notions that feel as if
they’ve been part of the lexicon of your half forgotten memories, then by all
means, pass this brilliant gem by … or, let go, and get swept up in the
magic.
Review made by Jenell Kesler/2014
© Copyright http://psychedelicbaby.blogspot.com/2014
Jenell KeslerMojaveReviews