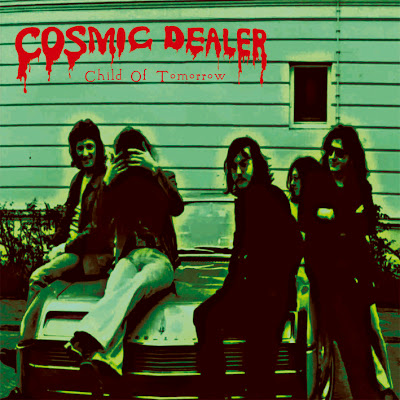 “Child of Tomorrow” by Cosmic Dealer
World In Sound #WIS1045 (CD/LP+Live EP)
Release Date:  22 May 2012
Rare and unreleased 1971 and 1973 material
by incredible Dutch band comes to life on CD and Vinyl thanks to German reissue
label World In Sound!
Thanks to Wolfgang and his wonderful World
In Sound German reissue label 13 tracks, 67 minutes and 53 seconds of rare and
previously unreleased Cosmic Dealer finally sees the light of day!  This incredible CD/Vinyl release includes a
24 minute performance done for the Dutch national television (VPRO) show
“Campus” that has never before been released.
The contents of “Child of Tomorrow” come in
five sections.  This review examines the
works by section, beginning with three tracks recorded at the Paay-Studio
Rotterdam in May 1973, the personnel at this session being Jan Reynders on lead
guitar and backing vocals; Ad Vos on drums; Angelo Noce Santoro on bass; Kees
de Blois and Ed Boender both contributing rhythm guitar and sharing lead
vocals.  The first track performed by
this quintet is the releases title track, with a run time of 3 minutes, 41
seconds.  The radio friendly and
exquisite, tastefully commercial “Child of Tomorrow” is reminiscent of Spirit
at its best, with Reynders’ gently snaking guitar lines leading the way for
Boedner’s gentle vocals, with Santoro and Vos supplying a punchy rhythm
section.  At the 2:30 mark the tempo
changes as Reynder’s guitar wails and Santoro and Vos go into overdrive for the
final minute of the song.  By the time
this song was ready for release Cosmic Dealer had already disbanded.  A travesty as the song was perfectly suited
for release as a single, the only question being whether it would have been the
a-side, or the b-side for “Sinners Confession.”
Reynders’ guitar introduces and drives this second track, twisting and
turning, setting the stage for de Blois’ gentle vocals and Santoro and Vos’
tight rhythm before a short solo by Reynders’ sends the song to its
conclusion.  “You’re So Good” features
haunting vocals by Boedner, supported by Reynders’ lead guitar.  The song flows delicately, the bottom end
held up by Santoro’s bass and the rhythm guitars, with no drums involved.  Another song perfectly suited for radio
airplay.  What a twist of fate.  Songs with commercial appeal flowed naturally
from Cosmic Dealer, while other bands toiled session after session in the never
ending quest for a “hit.”  Unfortunately
Cosmic Dealer was unable to take advantage of the fruits of their efforts.
The band’s next session, from September,
1971, resulted in three more tracks being laid down.  “Lifetime” opens with Boedner’s lilting
vocals accompanied by Reynders’ gentle guitar with Santoro and Vos controlling
the tempo, the result a sublime state of relaxation filled with beautiful guitar
work and pin point rhythm.  “Society”
features Reynders’ wah wah driven solos and flawless rhythm work by Santoro and
Vos.  “Julia” displays the versatility of
Reynders’ on guitar, the instrumental piece again featuring his command of the
wah wah pedal and well structured lead lines.
A home recording session from August 1971
features the band in its earlier incarnation and playing much heavier
music.  “Didn’t You Know” has a driving
rhythm, filled with fuzzed out guitar and masterful use of echoplexes by
Reynders and fellow guitarist Leen Leendertse.
Frans Poots’ use of echo gives his vocals an ethereal effect well suited
to the music.  “Westwind” starts gently,
but a minute and a half in Santoro and Vos turn up the tempo beating out the
rhythm, with Reynders and Leendertse adding Quicksilver Messenger Service (John
Cippolina) like snaking lead guitar lines before the song settles into delicate
Beatlesque vocals for the finale.
A rehearsal session from 1971 supplies “For
You” which features Reynders’ smoking hot guitar and heavy bottom end courtesy
of Santoro and Vos, the cacophony of sound overpowering Poots’ vocals.  Midway through, Poots’ flute takes the fore
temporarily, but in the end it is Reynders’ guitar that takes charge and brings
the rocker to a close.
The real treasure of “Child of Tomorrow” is
the inclusion of the four tracks performed live in 1971 for Dutch national
television.  A live version of the title
track from the bands’ sole LP “Crystallization” opens with the flute of Poots
and his gentle vocals, the rhythm section and guitars holding back.  Reynders’ guitar bobs about until a bit over
four minutes in when he puts it into overdrive, joined by Santoro and Vos.  Poots belts out the final vocals as the tempo
and volume become hypnotically rhythmic.
“Didn’t You Know” features Reynders’ guitar screaming along with
Sanoro’s bass and Vos’ drums, his guitar obviously in control of this up tempo
rocker.  “The Scene” again features
Reynders and his fuzzed out guitar with Santoro and Vos locked in perfect
rhythm behind him, with momentary pauses allowing Poots’ flute to take center
stage.  “Cosmic Jam” (also known as
“Black Widow”) is another heavy rocker featuring Reynders’ fuzzed out lead
guitar, but showcasing Santoro soloing on his bass run through a wah wah pedal
to astonishing effect.  This full tilt
rocker finishes out the set and the album with eight minutes of incredibly
heavy rock and roll.  This number finds Frans
Poots bashing his bongos, Jan Reynders’ guitar fuzzed to the max, and Ad Vos
pounding his drum kit, but without question it is the wah wah soloing of Angelo
Santoro on his bass that makes this the real show stopper and the perfect
ending for the album. 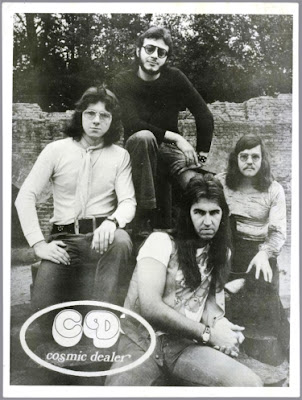 Meticulously remastered, like all World In
Sound releases, “Child of Tomorrow” completes the story of Cosmic Dealer.  In their first lifespan that is, as the band
has reunited and is playing live shows even as I wrote this review.  For the first chapter in the life of Cosmic
Dealer you will need to pick up the 2 CD or 2 LP version of “Crystallization”
available from Pseudonym Records on 21 January 2013 and be on the lookout for
the review of that release which will be published in “It’s Psychedelic Baby”
Magazine soon.  Until then, pick up a
copy of “Child of Tomorrow” and Happy Listening!
Review made by Kevin Rathert / 2013
© Copyright
http://psychedelicbaby.blogspot.com / 2013
Cosmic DealerKevin RathertReviews