‘Lady of Sorrow’ by Nero Kane | New Album, ‘Of Knowledge and Revelation’ 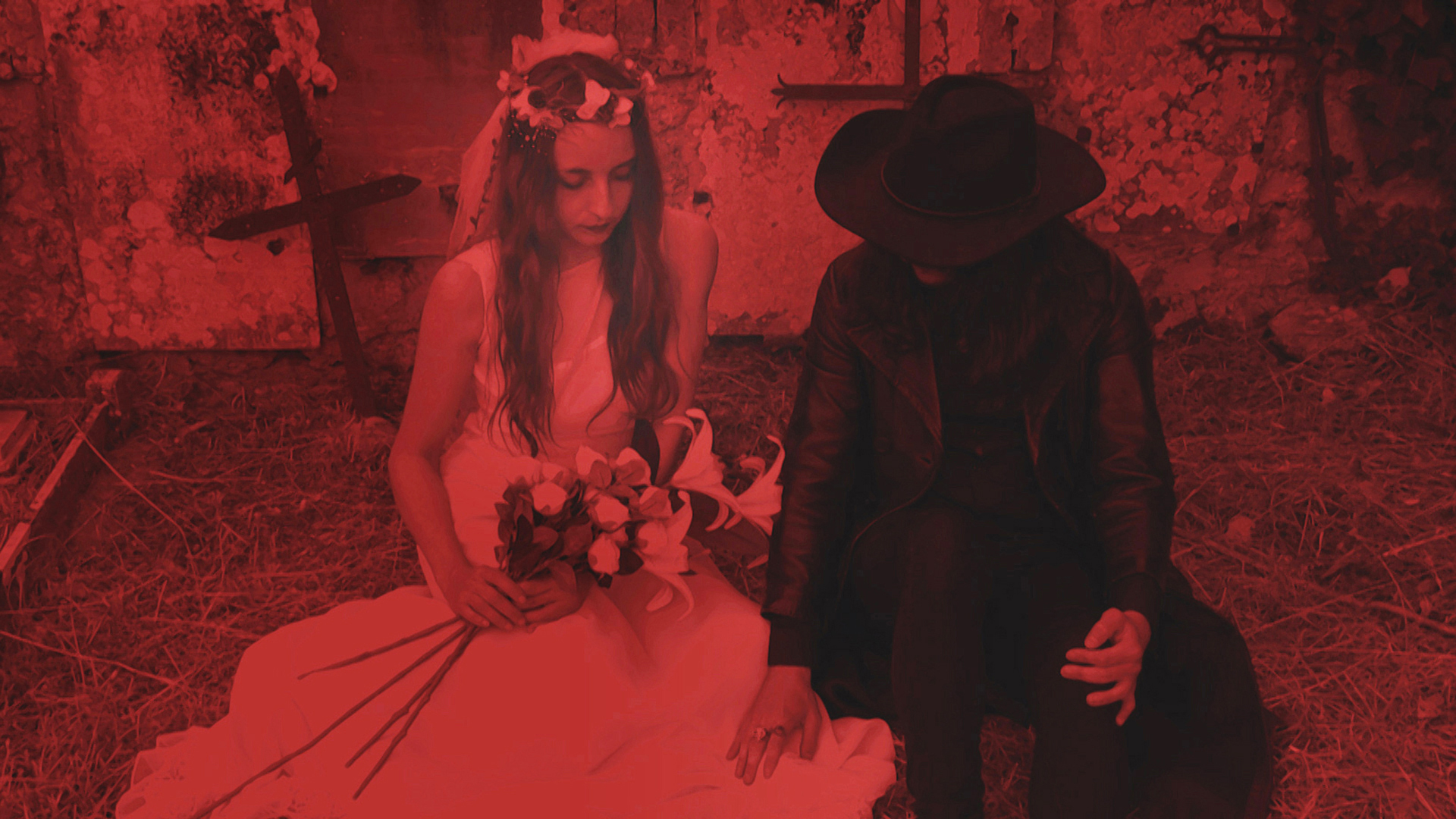 ‘Lady of Sorrow’ by Nero Kane | New Album, ‘Of Knowledge and Revelation’

Nero Kane’s psych dark folk world is intimate, minimal and decadent. Both in his vocals and guitar style, his European roots intertwined with America’s desert sound in a project full of emotional vision and cinematic flavour. His music has been defined as a suspended and crepuscular journey particularly concerned with death, religion and love. Nero Kane’s debut album, ‘Love In A Dying World’, was produced and recorded in Los Angeles by Joe Cardamone (The Icarus Line, Skeleton Joe) and released in 2018 with American Primitive label/art collective. ‘Tales of Faith and Lunacy’, his second album, was produced and recorded near Venice by Matt Bordin (Squadra Omega, Italian Occult Psychedelia), and released in 2020 via Berlin-based psych label Nasoni Records and the Italian labels BloodRock and Anacortes. Both albums achieved amazing international reviews.

‘Of Knowledge and Revelation’, Nero Kane’s third studio album, was created with the same team of the previous one: it is recorded in Venice in a fertile collaboration with producer Matt Bordin of Outside Inside Studio, and features visual artist, performer and filmmaker Samantha Stella, whose voice has been defined as “evoking the ghost of Nico”. In the last five years Kane and Stella performed together for Nero Kane’s concerts in clubs, theaters, churches, museums and art galleries in Italy, Europe, UK and Los Angeles. Their live performances have been described as journeys through darkness and melancholy, with the creation of a morbid beauty and an intensity which make them unique.

The album is launched by the video for the lead single ‘Lady of Sorrow’ shot by Samantha Stella, who also directed the experimental films for Nero Kane’s previous records, where Kane and Stella are the protagonists. A garden of dried flowers welcomes the preacher Kane in a visionary and circular journey where love and death are exchanging their roles as in a Dante’s circle between Heaven and Hell. A reference to the incipit that introduces the album, an excerpt from the writings of the mystic Mechthild Von Magdeburg, from which the title of the record is taken.

Nero Kane describes the album with these words: “’Of Knowledge and Revelation’ marks a new path in my constant spiritual pilgrimage through darkness, fog and light. A journey made of solitude, of rise and fall, in a world that recalls Dante’s Limbo. I love feeding myself with visions, literature and painting in particular. Inspirations came from old paintings like “Ascent of the Blessed” (1490) by Hieronymus Bosch, engravings like Dante’s “Divina Commedia” (1861) by Gustave Dorè, and writings like “Tears and Saints” (1937) by Emil M. Cioran, “Hymns to the Night” (1800) by Novalis and “The Flowing Light of the Godhead” (1250-1270) by German mystic Mechthild Von Magdeburg, who also appeared in my previous album ‘Tales of Faith and Lunacy’”.

A dedicated tour in Europe and UK where Nero Kane is accompanied by Samantha Stella on mellotron, organ and vocals, will be launched between October and December 2022 in support of ‘Of Knowledge and Revelation’. The first announced dates are as follows. 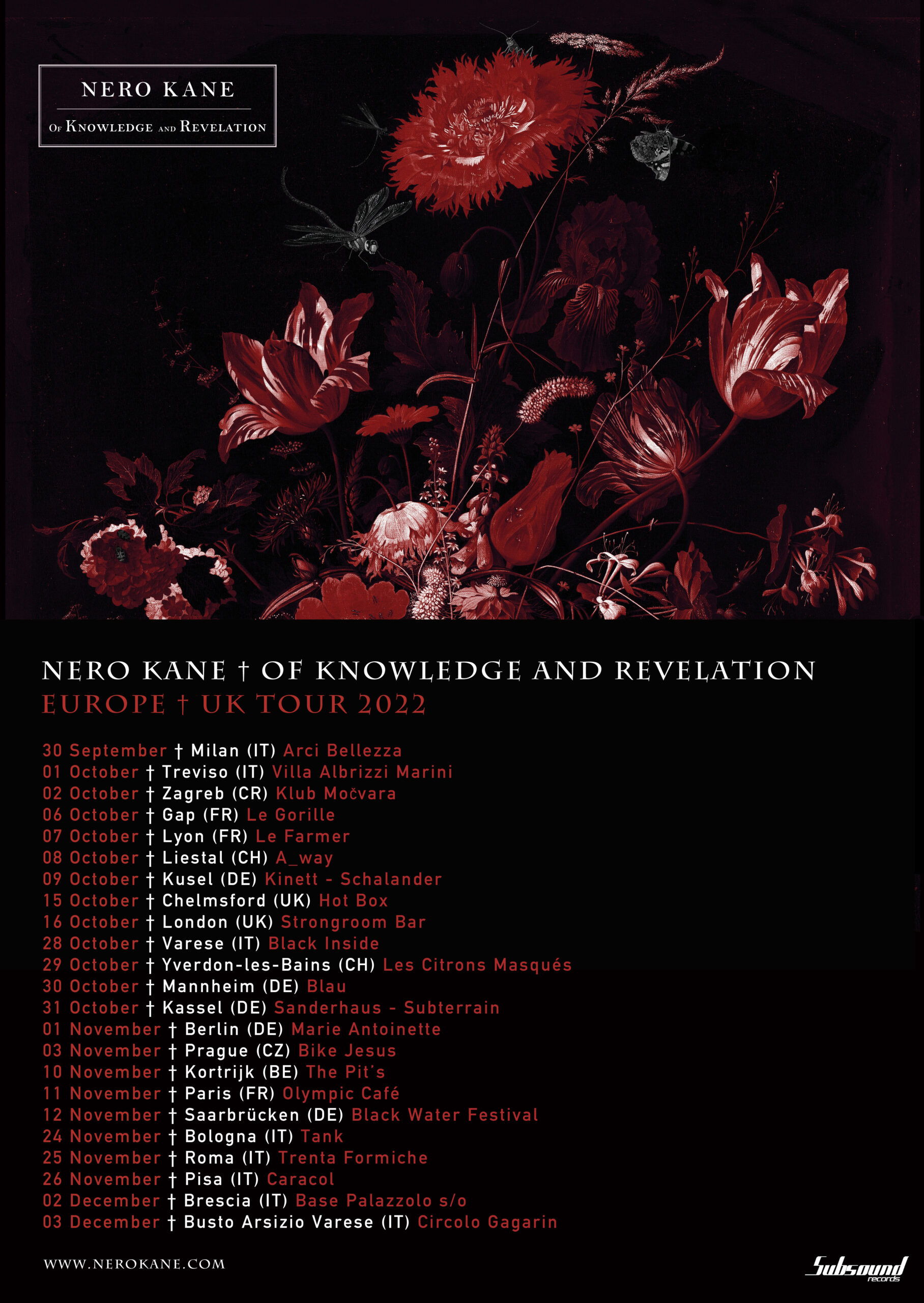 “A place where time doesn’t exist, where all is suspended, all is freezed in the vanity of life and the desire to reach, somehow, someday, the eternal light”

Your new album, ‘Of Knowledge and Revelation’ will be released at the end of this month. Do you see it as a continuation of ‘Tales of Faith and Lunacy’ as the recording process was done with the same team?

Nero Kane: Yes, I’m really happy for the release of my third studio album out on 30th September via Italian experimental label Subsound Records in a stunning double LP vinyl and CD. I like to consider ‘Of Knowledge and Revelation’ as a new, and maybe the last chapter of a sort of trilogy started back in 2018 with my debut album ‘Love In A Dying World’ recorded in Los Angeles with producer Joe Cardamone (The Icarus Line/Skeleton Joe). But this new episode is clearly more connected with the second album ‘Tales of Faith and Lunacy’ (2020) as it was made with the same team, the producer Matt Bordin (Squadra Omega/Omega Mai/ Italian Occult Psychedelia) of Outside Inside Studio near Venice, and Samantha Stella as vocals/organ, who also joins me in the live shows. Basically my artistic research with this trilogy is a pilgrimage in the darkness of life which grows and elevates more and more and reaches this new level that can be described as a limbo, where the soul survives and endlessly wanders.

Would you like to speak about the journey you’ve taken on the latest album?

As previously said, this is a journey of the soul that could be seen as a descent in the limbo. A place where time doesn’t exist, where all is suspended, all is freezed in the vanity of life and the desire to reach, somehow, someday, the eternal light. The fog, the desert lands, will-o’-the-wisps, choirs, prayers and sighs, are the background of these stories that move in the Elysian Fields.

Was most of the material created after the release of ‘Tales of Faith and Lunacy’ or did you pull some sketches from the past?

Everything was conceived and put together after the release of ‘Tales of Faith and Lunacy’ and is its evident continuum.

The album is launched by the video for the lead single ‘Lady of Sorrow’ shot by Samantha Stella, who also directed the experimental films for Nero Kane’s previous records, would you like to speak about the creative process when it comes to Nero Kane?

During the pandemic my main focus was to write a new album so, in some way, I forced my creative process to reach this target as soon as possible. I read a lot of books, mostly about art, romanticism, philosophy and put together all these influences with my music aesthetics and decadence. Most of the time my creative process starts with the music or with the lyrics as two separated moments. I work a lot with loops which create a sort of background mantra. Then something happens and I start to connect the parts together. Sometimes this process is so quick that I can write a song in five minutes, sometimes it requires a lot of work. Sometimes music and lyrics come together and this is a really intense moment but the big amount of work is made day by day. I used to write down lots of notes on my iPhone and record lots of ideas that hopefully will become new songs. 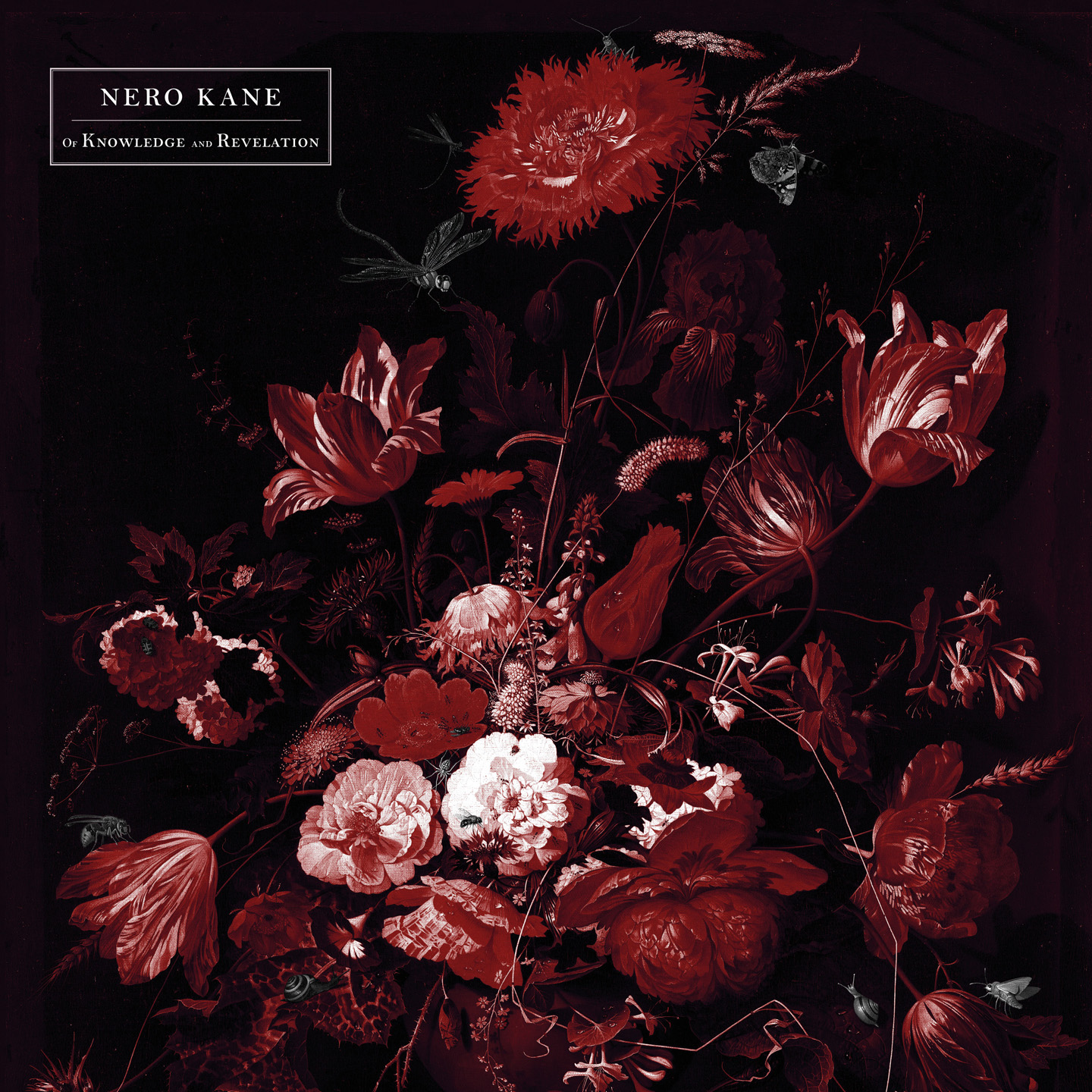 Would you like to speak about the literature and art that influenced the making of this latest album?

Inspirations came mainly from old paintings like Ascent of the Blessed (1490) by Hieronymus Bosch, engravings like Dante’s Divina Commedia (1861) by Gustave Dorè, and writings like Tears and Saints (1937) by Emil M. Cioran, Hymns to the Night (1800) by Novalis and The Flowing Light of the Godhead (1250-1270) by German medieval mystic Mechthild Von Magdeburg, who also appeared in my previous album ‘Tales of Faith and Lunacy’. The title of the album comes from a poem included in this last mentioned writing that recites “Love without knowledge is darkness to the wise soul. Knowledge without revelation is like the pain of Hell. Revelation without death cannot be endured”. These sentences are appearing as an incipit in the beautiful album’s artwork made by Manuele Scalia. Always referring to literature, for the short film directed by Samantha Stella in support of the album’s launch, she imagined me as a preacher who travels among the circles described in Dante’s Divine Comedy, the greatest Italian poet directly from the fourteenth century. In a Jodorowsky dreamlike-desert dimension, a garden of withered flowers full of thorns represents that sort of dark forest narrated by Dante, and a circular passage between Heaven, Hell and Purgatory.

Yes, an extensive Europe and UK tour (Berlin, Prague, London, Rome, Paris and many other cities) has been scheduled starting from the release party on 30th September in my hometown, Milan. On my website www.nerokane.com and socials you can find all the shows and events. Hope to see you on the road.