With Shouting Over Deep Water Blues, 44 year old Olympia-based clarinetist Arrington De Dionyso made an album on a small boat with a self-made instrument called the Bromiophone.

“A sound as old as the dinosaurs, like a roaring sea monster”

Where and when did you made these recordings?

Arrington De Dionyso: The recordings for Shouting Over Deep Water Blues were made in the Summer of 2012 in the ocean near a small island in Sweden. I don’t remember the name of the island, but it was in the Southern part of Sweden, not so far from Gothenburg.

Why did you want to record on a boat?

My friend Henrik invited me to visit his summer house where he lives sometimes if he wants to get away from the city. You have to go on a boat to arrive there from the mainland of Sweden. He has a lot of very fancy recording equipment because he has worked on many projects creating audio scenarios for film and television, so really it was his idea to start this project after seeing some of my concerts. He asked me if I would like to take a trip in his boat and make some recordings, and I was very happy to do this!

The entire experience was a few hours I guess- the boat has a small motor but we didn’t really want the sound of the motor so we only made the recordings when the motor was turned off and you can hear the sounds of waves and sometimes the birds. We made several hours of recordings, but in some parts the sound of the wind blowing on the microphones was too strong, so we didn’t use that part.

“It becomes like something so wild, ancient, and “primitive” in the sound” 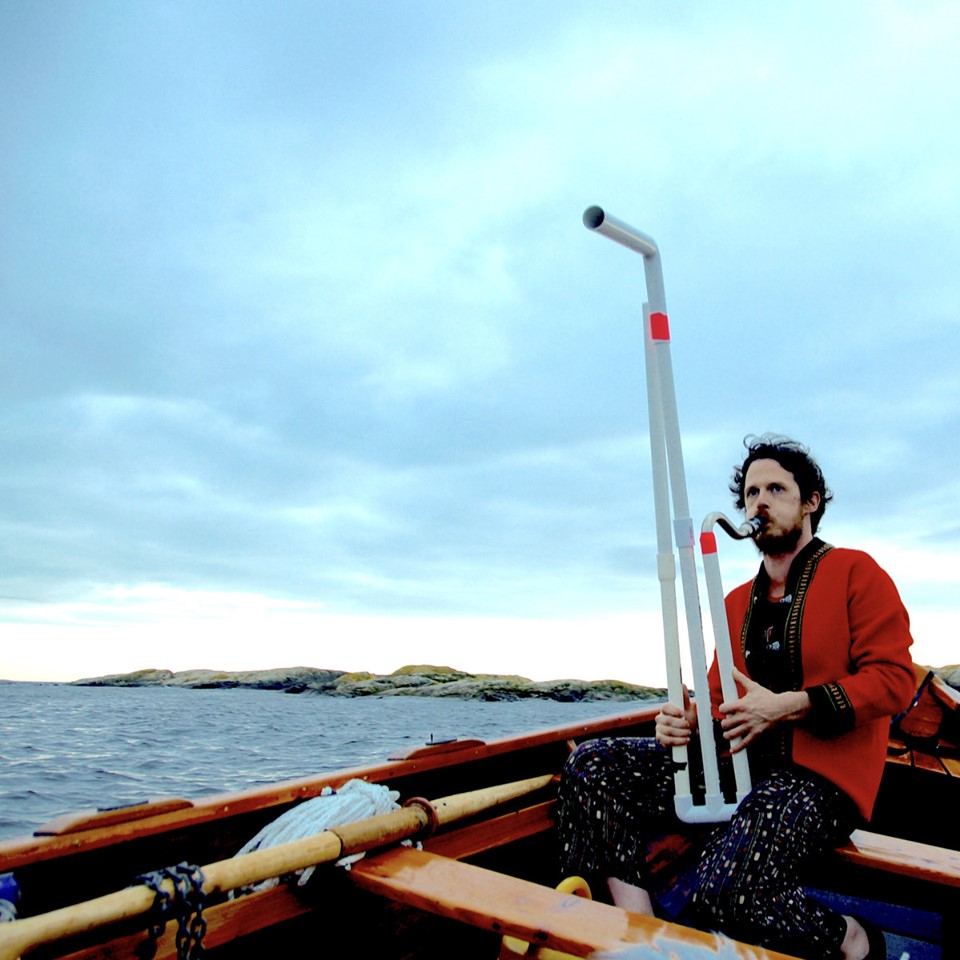 What is the instrument you play on this record?

It’s a combination of voice and an instrument I created called the Bromiophone.

Why did you build this instrument (instead of using an already existing music instrument)?

The Bromiophone is based on the idea of a bass clarinet. I have played the bass clarinet since about 1990 or so- it’s my favorite sound, but sometimes I feel that the keys on the instrument are too limiting- the scale is always fixed in a Western idea of how the notes should go, but if you create a longer tube for the instrument and only give it one or two holes, you have to play it in a completely different way. When you combine that with the sound of the voice, it becomes like something so wild, ancient, and “primitive” in the sound, even though of course it’s just pipes made of plastic. The pipes can be moved around, they all fit together like a Lego set, so you can build it into crazy shapes and that might change the sound as well. So every time I play the instrument, it will surprise me in some way with some new kind of sound.

You use the word ‘blues’ in the title of the album and in several tracks. Why? Why do you call it ‘blues’?

Blues in the sense that there are many kinds of blues in the water and the sky. Then it also has a resonance with the idea of “Blues” as an ancient and deeply spiritual style of singing. What we call “American Blues” music is actually connected to a way of making music that is very very ancient- originally it was a style of singing called “moaning” – just a raw vocal sound without using any words at all. So I’m using the rhythm of the waves rocking the boat to make a connection with that sensibility.

Yes, it can be all of those things. I just think it’s such a beautiful sound on this record- it doesn’t sound like any other record that I have ever heard before. It’s a completely new thing, but it also has a sound as old as the dinosaurs, like a roaring sea monster.