Can you elaborate the formation of Metabolist?

Malcolm Lane: The band was always London based. I started the band with Bob Goffman in 1975.

Malcolm Lane: I was in a few unknown bands: Green Gilbert, and the Performing Cardinals. Lots of jamming.

Mark Rowlatt: Metabolist was my first band. I was self-taught and was already in contact with Malcolm Lane’s brother Duncan through our mutual love of Magma. After Metabolist, I joined Shock Headed Peters teaming up with ex-Lemon Kitten Karl Blake, then Ectomorph with ex-Event Group Michael McDonough-Jones playing on an LP for each. ‘A Perfect Action’ was a cricket opera written by Michael which toured UK with a dance company and spawned an LP. Joined Howard Devoto’s band Luxuria for their UK & US live tours in 1988. I formed Bugblot with bassist Karl Leiker from the Luxuria touring band and Dave Maltby, ex-Jah Wobble’s Human Condition. We gigged, but didn’t release anything, unfortunately.

It’s really hard to describe your music. Do you consider yourselves as being part of the punk generation?

Malcolm Lane: Punk was a different generation, although I did meet up with various people, as did other members of the band, as we were based in central London.

Malcolm Lane: I started playing long before the others, and went to gigs in London in 1967. The most remarkable of which was “Christmas on earth” at Earls Court Olympia. Bands who played Pink Floyd with Syd Barrett, Tommorrow, with Steve Howe, Soft Machine with Robert Wyatt and Kevin Ayers, Traffic, Jimi Hendrix … a total inspiration, especially what could be done with a mobile band [one where all the musicians etc were important, not a lead singer with backing band. I had seen Magma by this time too.

Mark Rowlatt: For me, Magma, Faust, The Fall. No surprises there!

So the local scene had impact on you?

Malcolm Lane: Living so near to London meant that I got to see bands like Cream and the Stones easily.

“Metabolist summed up the way we went about creating our music.”

How did you decide to use the name “Metabolist”?

Malcolm Lane: Metabolist summed up the way we went about creating our music. An idea which passed through the metabolism and accumulated stuff.

You were active for about two years before you recorded your album. The punk scene was growing at the time.

Malcolm Lane: The punk scene was parallel with the indie scene, and we were never a Punk band, but it was impossible, especially as we lived in London, not to be inspired by the punk ethic. This is why we made all our own records, and screen printed “Dromm” at home.

How did the crowd react to your music?

Malcolm Lane: The punk crowd saw us as another band, but didn’t want to share our taste in clothing!

Hansten Klork was released in 1980.

Malcolm Lane: Anton Loach, our lead singer, bought a Wasp, it was very basic and unpredictable but took us to new places. This is probably what inspired Morgan Fisher to put us on Miniatures [after a gig at the Subterranea]. Can had started to influence us, and I was a big Picasso fan, so didn’t see any barriers to what we could do. Mark Rowlatt bought along a free music approach to drums, so we could have industrial chains and hub-caps. Anton Loach also used pre-recorded tapes of noise [see Dromm].

Malcolm Lane: A typical session would start with Gerald Kingsford, or Mark Rowlatt playing a drum riff, the tape would be going and people would add whatever they felt fitted. A session would last about 4 hours, and between rehearsals Anton Loach, would select juicy bits, which became pieces.

Where did you record the LP and what can you tell us about Drömm Records?

Malcolm Lane: Drömm Records was about the Desperate Bicycles saying “it was cheap it was easy do it” on their The Spiral Scratch EP. We did all our recording at Trentishoe mansions recording studio, run by Anton Loach.

“Making the album was a continuation of the process of exploration.”

What are some of the strongest memories from recording and producing your LP?

Malcolm Lane: It was exciting to know that people in Netherlands, Germany, Italy, Japan, USA, etc. had heard our music, and would come and visit us. Making the album was a continuation of the process of exploration. I can recommend it to anyone who doesn’t want to be a factory made pop-star.

How was the record distributed?

We visited distributors like Rough Trade, Caroline, Zircon etc., some took 20 others loads more. As we don’t drive we got very long arms carrying the records on public transport.

Malcolm Lane: “Drömm” was our first vinyl and had Gerald Kingsford on drums, Goatmanaut had Mark Rowlatt. “Drömm” was very exciting and featured recordings from the games arcade. Goatmanaut has a great track which is Simon Millward on bass through a Watkins echo unit [analogue] that sounds like the minutes before the end of the world.

Did you play any shows in support of your LP?

Malcolm Lane: As we didn’t have a record company, this was not an issue, we got gigs when we could, and found that as we did Fanzine interviews and Sounds and Melody Maker pieces, the fans increased. John Gill from Sounds stumbled across the band, and got us exposure [he was a big Residents and Can fan].

There was the scene that included Throbbing Gristle, Cabaret Voltaire, This Heat (interview here), and Daniel Miller. We did gigs with them even organising a benefit gig with This Heat.

“Creativity and playing too loud.”

Was there any concept behind the band?

Malcolm Lane: Creativity and playing too loud. Also the belief that we were going somewhere, no-one had been before. I had looked at psychology, and was keen to show that Watson and Skinner were wrong Koestler was on the right lines!

What can you say about minimalistic cover artwork of Metabolist?

Malcolm Lane: Jacqueline Bailey, our manager had always been a Mondriaan fan and wanted directness and apparent simplicity.

Malcolm Lane: We met Philippe Fichot in Rough Trade at the suggestion of Geoff Travis, and agreed on many things. I would also like to have done something with Deutsch Amerikanische Freundschaft. They were in their instrumental phase at this time.

What’s the story behind Stagmanaut!?

Malcolm Lane: Stagmanaut! was a project assembled by Simon Millward and was a continuation of Goatmanaut. After Anton Loach had left the band, production fell to Simon Millward, who was very gifted in this area [he went on to write the Cubase manual]

Malcolm Lane: Being in Metabolist was a very intense experience, with no immediate hope of making a living from it, if a magic fairy had given us a lot of money… We were very tired as we all had day jobs, Anton Loach for example worked in the fruit market. Mark cleaned toilets and had to walk everywhere. This meant that people began to crack – Anton Loach was the first, then me. Lucky we all lived to tell the tale. 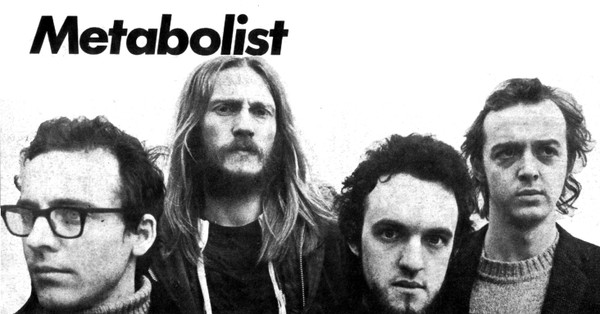 Malcolm Lane: I teach band music in school, I have introduced 100’s of London children to noisy music, so that when they grow up they will form other Metabolists and reject facile industry fodder.

Mark Rowlatt: I discovered travelling and spend most of my life with a backpack on now.

Was there any official reissue? Would be great to see it happen.

There have been Japanese and other bootlegs, so it would seem pointless.

I hope that the experimental spirit will always stay with rock, the last gig I did was at Batofar in Paris with Batchass in 2012, and showed that music transcends everything.