Can you elaborate the formation of ‘McScrooge’?

Alex Hüther (electric guitar): Alexander Hüther: The roots of the band lie in the formation ‘Feeling’, which I founded in the mid-70s with two much older musicians on the bass and the drums. We played rock and pop songs from the 60s. After the departure of the bass player, who had also sung most of the lead vocals, my sister Camilla- as a singer – and Frank Meyer – first as a bassist later as a guitarist – joined the band. From this point on, we were a ‘real’ school band. We became known in our region and successfully performed smaller concerts. At that time the ‘core of the band’ consisted of Frank, Camilla and me – just like later with Camilla Motor. After the split of ‘Feeling’ I founded a new band with musicians from the Mannheim music scene. As Michael Weitzel (bass), Rolf Stiller (drums) and Werner Schneider (Keys) were already members of the band. A short time later, Frank replaced the band’s second guitarist and we started playing our own songs. That was the beginning of McScrooge.

How did you decide to use the name ‘McScrooge’?

Honestly, I do not really know that anymore. Naming the band was always more or less of a problem with all the bands I’ve played in. Since it’s about statement, identity and should not sound stupid! Since we were all big comic fans back then, the naming was rather easy. When we saw the design of a sticker with Uncle Scrooge with a Flying-V and a Rock’n Roll hairstyle from a friend who was a graphic artist, we were totally thrilled.

What influences the band‘s sound?

McScrooge is a kid of the 70s. Of course, we initially focused on our heroes at the time, such as Deep Purple, Led Zeppelin, UFO, Wishbone Ash or ZZ-Top – after all, we were a band with two guitarists, so we foccused on this kind of music. Musical influences also came from our keyboarder Werner, who contributed jazzy and latino influences to the band. There was always tension!

Did you play any gigs?

Through the concerts we had played with ‘Feeling’, we had already made contacts to organizers. In addition, at the beginning we played mainly in the region around Mannheim and our hometown Frankenthal. These were small clubs and youth centers. We also participated in smaller competitions. After the release of the album we played at bigger events and festivals outside of our region.

What influences your sound?

We were young and we were two guitarists in the band – one leads to the other. Back then, we were influenced by the rock music of the 70s and wanted to sound that way. So: Marshall stacks! At that time I had a Marshall 2204 Top – shortly after it was available in Germany and regret today that I have sold it. Of course, you are always influenced by the musicians you personally like. For me it was Rory Gallagher in particular, whom I have seen several times at concerts – and always wanted to give up playing the guitar afterwards. That blew me away! Blues rock has influenced me personally very much – and that is still the case today. At that time my pride was a 1972 Stratocaster and a Telecaster from the same vintage, plus a Guild.

“We were very creative – so creative that the sound engineer often shook his head.”

What’s the story behind Chilli con Carne? Where did you record it? What kind of equipment did you use and who was the producer? How many hours did you spend in the studio?

Recording the LP Chilli con Carne at that time was simply the next logical step in our musical development, but also to gain a greater reputation. And – we were about 20 years old – we wanted to fulfill a dream! Back in 1978, studios were insanely expensive and very ‘established’. We could only afford it because we worked during the holidays or after school. We have produced the whole thing ourselves, with the support of a good friend of ours, Helmut Winter. It was a special experience when we first stood in a studio. We took the pictures in a studio in the vicinity. We were totally impressed by the atmosphere and the technology – that was completely new to us. Very impressive! The recordings were made on an 8-track tape (1″). And within 2 days. We recorded the rhythm tracks together as a band, solos, grand pianos, vocals and choir we overdubbed. Due to time constraints, we recorded almost all night. That was pure stress with a lot of fun! Since this was the first studio recording for all of us in the band, we were particularly impressed by the creative aspect of the studio work. This too was a new and very special experience for all of us. Of course, we did not have all the time in the world, but you still had the opportunity to try things that were not possible in the rehearsal room. This resulted in new ideas and inspirations. It was also interesting to deal with the studio technology. We were very creative – so creative that the sound engineer often shook his head. But in the end, I think everyone really learned from each other. Incidentally, for the first time since then, I met the former sound engineer at a concert of my current band last year – he still knew exactly about this studio session! That says a lot.

The album was self-released. Where did you press it and how many copies were made?

As far as I know, that was an edition of 1000 copies, which we sold at concerts, in local record shops and to friends. At that time we had no contacts to the professional music scene and wanted to do exactly what we wanted to do. We organized the distribution ourselves and even made the cover ourselves. Since our bassist worked as a graphic designer, the know-how was no problem. We spent hours scrubbing Letraset letters on the cover template! But that too was an interesting experience and a shared effort.

The songs were all written and texted by Frank. There are very different tracks and different musical styles are represented. Personally, I can say little about it because I was not involved in the creative process in terms of composition or content. Of course, the images reflect the personality of Frank, this is especially clear from the lyrics that reflect his individual perceptions, experiences and attitudes. Musically, the influences of ZZ-Top, the Doobie Brothers or Santana and the Allman Brothers are clear to me. Of course, Werner wanted to use the grand piano that was in the studio as often as possible – when did you have the opportunity! 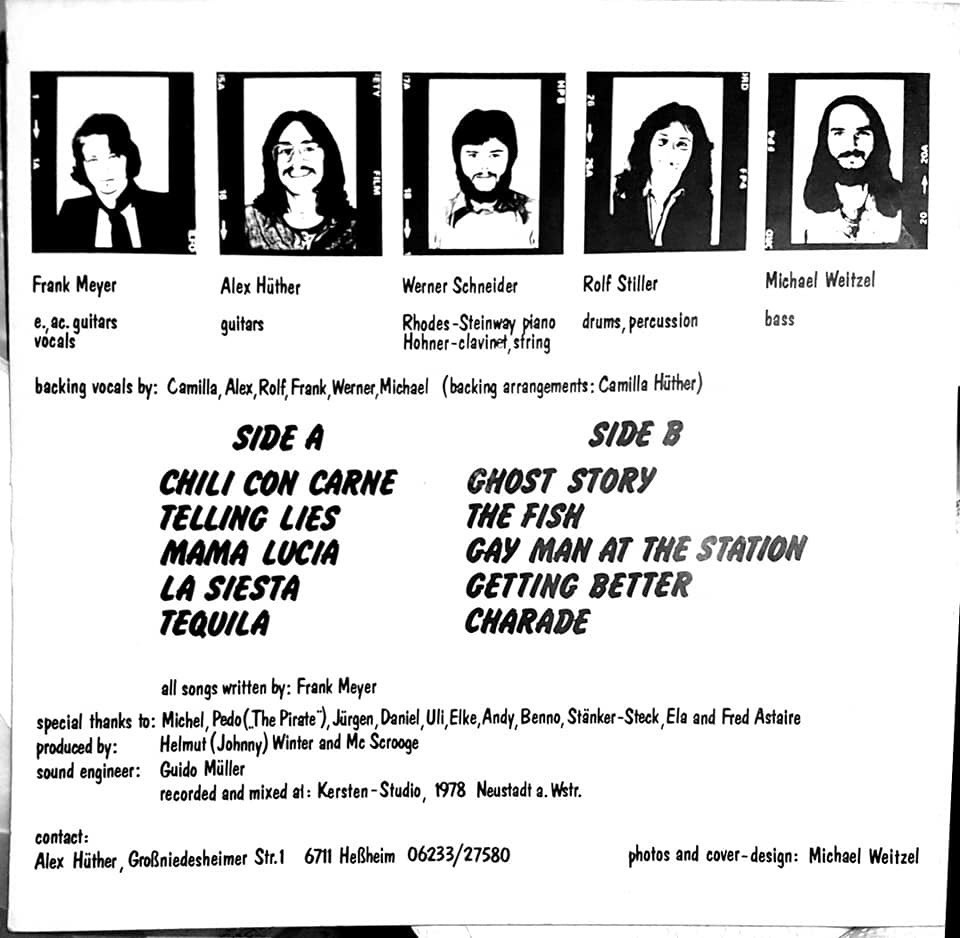 Did you play any shows after the album was released?

By releasing the album, we have achieved exactly what we had planned: we had evolved. Since some radio stations had played songs from the album and also the press publicized the release, the awareness of the band increased significantly. This also gave us the opportunity to be booked for larger events and festivals. The positive development showed that we were in a transition period at that time: we were no longer a school band and the classmates who watched our concerts, stayed away when school was over. With the release of the LP we had the chance to reach a different and bigger audience.

What was the scene in Mannheim? Were you friends with other bands from your town?

At that time we had contacts to the Mannheim scene and to musicians from our area, whom we knew from our schooldays, or got to know through our concerts. Especially the change of the rehearsal room to Mannheim brought us more into contact with the Mannheim music scene. Interesting was also the contact to Peter Sailer, who formed ‘Tritonus’ and who gave us some gigs. We also made some demo recordings later in his studio.

Were you or any other members in any other bands that you would like to mention? Camilla Motor was a band you were part of …

Camilla Motor was the logical development of McScrooge. After we had changed the bass player and the drummer and the keyboarder had dropped out because of musical differences, we had reached a point where we broke up due different opinions about the musical development. It was the time when rock music in the German language became popular for the first time – with Udo Lindenberg, but especially with Nina Hagen. Of course, both the musical direction and the textual content changed, especially because the creative process was divided among different band members. After quitting the band during the production of the 2nd LP of Camilla Motor, I have played in different projects and set up my own recording studio and founded a small production company. The most important bands in which I have been active after that are ‘Aleksa’, ‘Red Adair’ and ‘HBH’, with whom I did not release any records but only played concerts. In 1994, together with musicians from the region, I founded the formation ‘Grabowsky’ with which I still tour, write and produce songs regularly.

From McScrooge there are still some studio demos, which we recorded in the later ‘Camilla Motor’ occupation in a studio in Mannheim. Already at that time, the musical style of McScrooge had changed: the titles are more influenced by funk elements and less rocking.

Musically, I’m currently traveling with the band Grabowsky, this is a classic 3-man band (bass, drums, guitar) and two front singers. Here I let off steam on the guitar and write the songs. This year we are celebrating our 25th stage anniversary. So far, I have produced and released 3 maxi singles, five studio albums and 2 live CDs with the band. In terms of content, the whole thing is rock music with German lyrics. With the band I am touring the region as well as Germany and the German-speaking countries. The whole thing is a lot of fun and has a great response from the audience. The concerts are full, the people are enthusiastic and have fun – what more could you ask for? In addition, I’m still involved in other projects: I wrote and recorded the music for two short films, participate in an unplugged project, play the music for a children’s theater and much more.

Thank you for taking your time. The last word is yours.

With pleasure. I have to thank you! It’s interesting to see the development that music, especially rock music, has made since the 1970’s. It is always an experience to make music with people who are in tune with you. These are wonderful experiences that shape your life. And I can still say today: standing with a band on a stage and playing the guitar, seeing how the band and the audience enjoy it, is a great moment that I am always grateful for. Feeling, joy, shared experiences and friendship are central – not the monetary success. For me it is important to freely and self-determined to make the music I want to do, to write and publish songs that I like myself and not to be dependent on the music industry and their influence. This seems to me to be even more important today than in it was the past.

And: the most important thing in life is your family and having really good friends!