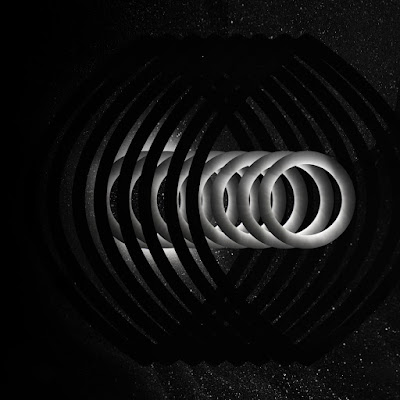 Sugarpulp is making strides in the Chicago music scene and creating psychedelic waves that delve into deep, sultry tones, rhythms, and melodies. I had a chance to experience their live set at The Subterranean July 30, 2018 and then again at the Live Wire Lounge October 19th. Captivating licks that complement a series of grooves, Sugarpulp takes the listener on an adventure through a fun house of limitless bounds of creation and imagination. The spirit of the Yeah Yeah Yeahs swirls with undertones of The Kinks. Their most recent release, “Waiting In The Dark” brings to life the burning desire of temptations that create a love affair with an evocative composition. We were able to discuss their upcoming release of their sophomore album “Teeth”, musical influences, where they’ve been, and where they are going all while eating spaghetti in the bathtub.
You’ve toured quite a bit and have played venues throughout Chicago since your genesis for about 4 years now and have developed quite an experience to be had in a live setting. What’s been your favorite show/venue you have played so far?

Deb: Playing the Bling Pig in Ann Arbor felt pretty spiritual. So many music gods had been on that stage before us and we kept talking about how you could really feel their energy. Playing felt so electric! I may or may not have drawn a pentagram on the mirror of the dressing room… At home, we really love playing Schubas! That’s where our release show will be and we’re SO excited about it!
If you could sell out any venue in the world what would it be?
I’m mildly obsessed with playing SNL which is not necessarily what you asked but it’s still my answer. Metro is our top at home venue we all want to play. We all have our different dream venues or festivals.
“Open Yr Mouth” definitely captivated my attention with the use of ethereal melodies combining cunning concepts and story-telling. What can we expect from the debut of your sophomore album?
MORE! Haha! We’ve just been building upon everything we learned in making “Open Yr Mouth”. We’ve got more of that biting femme ferocity, lots of energy and, our favorite, expansive cyclical riffs. We’ve also been playing with different textures of sound. We like to reference David Lynch when we’re working on keys and it sounds so fun layered in with Sam’s big guitar tones.
Who are 3 artists that have influenced your chemistry of sound?
We used to reference The Kills a lot while writing. The interplay between Sam and I was influenced heavily by them. And Allison Mosshart is kind of a vocal idol of mine. For Sam in particular it’s Queens of the Stone Age and for Foley it’s Bloc Party or Queen.
How do you think Sugarpulp will evolve in the years to come? What are your goals?
We hope to be living in a bus, on the road to play SNL, of course. Or living on the moon. Either will work.
If there was an opportunity by SpaceX to go to Mars on an all-inclusive trip to explore new terrain, would you go as a unit?
We’d have to! How else would we be able to play a show there?!
You have $100.00 left after being robbed by the city of Chicago in parking tickets and speed light cameras, how do you spend it?
Bottle of TJ’s Bourbon, $10 pre-roll, 100 Sugarpulp stickers (the old design) and this month’s drobox bill. 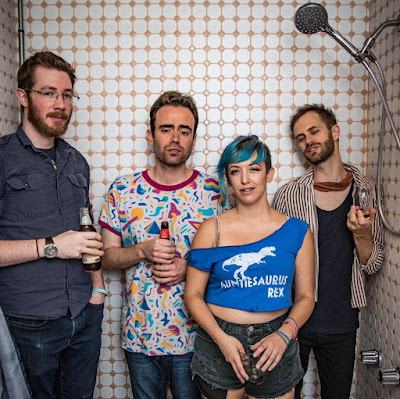 If we had access to a time machine and there was an opportunity Sugarpulp could support any act in the industry in history, present or hypothetical future who would it be? One past, one current, and one future artist.
David Bowie, Dr. Teeth and the Electric Mayhem, DJ Hot Fruit.
What would be your solution to saving the world?
Molly water.
How do you wish to support the DIY scene once your song “Waiting In The Dark” hits the charts and you’re living large?
I have a fantasy of owning, living in and running a DIY space. So, once we hit it large, we’ll probably make that a reality! I think the most important thing we can do it to keep showing up and to keep listening. Playing those shows is important but attending those shows, listening to the community and supporting the artists within is what’s even more important!
What are 3 songs that have shaped you as a musician?
Deb: “Dance This Mess Around” by the B-52’s, “Rockers To Swallow” by the YYY’s, “Jonathan” by Fiona Apple
Foley: “This Modern Love” by Bloc Party, “Black Sheep” by “Metric, Hell” by Tegan and Sara
Sam: “Half” by Soundgarden, “Clear Spot” by Captain Beefheart, “Methamphetamine Blues” by The Mark Lanegan Band
Aaron: “Synchronicity II” by the Police, “Hair Pie Bake II” by Captain Beefheart, “For No One” by the Beatles.
What do you wish to accomplish on your excursion down to SXSW in 2019?
Meet new people and learn whatever we can from them. We want to meet other bands and other musicians trying to make their art on the road. We want to talk to people completely different from ourselves! Why are they going to a show? What makes them happy? What makes them angry? What can we learn from people and places that feel foreign from our home in Chicago? And we want to share our music with other humans! We want to make them feel happy and energetic and pumped to go live the best life that they possibly can live. And it’d also be swell if we could break even, but it’s a negotiable goal.
You guys describe your sound as Glam Psych. What is that and how did that come together?
We’ve actually spent a lot of time over the past year talking about what kind of a band we are because we didn’t really agree on it until recently. Some of us have very little overlapping musical tastes. I think I nearly choked when Foley compared us to Prog Rock when we were giving an interview on WZRD. But we just kept arguing and playing together until we were able to weave everyone’s point of view together. Our friend came up with the term ‘Glam Psych’ for our sound and it just made so much sense. It conveys the high energy of our music and our pop influences without having to call ourselves Power Pop or Alt Pop Rock. That makes me want to gouge my eyes out when I see people describe us that way on an event description. Not because there’s anything wrong with those bands but that’s not us. We’re way more Yeah Yeah Yeahs than that. Glam Psych also nods to the fact we’re influenced by what’s currently happening on the Chicago Psych scene. We’ve been playing with these fun drippy synth sounds and doubling Sam’s guitar riffs on key and bass. His tone and riffs are such a huge part of our sound, so it’s been really fun to play that onstage.
Sam, where are those juicy riffs coming from?
Sam: Usually what happens is when I hear a riff or melody I enjoy, I ‘borrow’ the aspects of it I like. Other times, I’ll hear a melody for strings in my head, and then imagine how it might translate to guitar. What’s most fun for me is experimenting with chromaticism, dissonance, and rhythm. A good melody to me is a cyclical line that will sometimes start where it began. 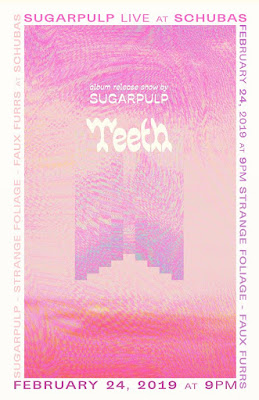 Come and experience Sugarpulp at Schubas February 24th for their album release before they hit the road on their excursion down to South by Southwest!

Listen to their single, “Waiting In The Dark” here.