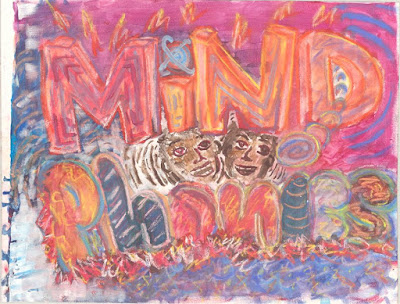 Purple Corporation – Mind Phonics (Self-released, 2018)
https://soundcloud.com/purplecorp/sets/mind-phonics
Purple Corporation’s Mind Phonics is an eclectic production of jazz rap—with a major emphasis on jazz. The LP dropped this August and is plump with instrumentals ranging from static-drenched drum tracks to glorious trumpet crescendos. While the group seems fairly undiscovered, their talent is far beyond their years. The album is, quite frankly, a must listen.
The opening track, “Build,” is an easy introduction to the release’s caliber of talent. The musical motifs are deliciously simplistic in their harmonies, a gentle introduction immediately saturated with a fuzzy electric bassline. Within moments, however, we’re already wading through thick brass climaxes akin to Kamasi Washington. On to “Lucid” and we begin to get a more contemporary taste in our mouths. Lackadaisical rap slithers atop what I believe to be a sample of Nico Segal off the stunning 2015 release Surf, when he was still an active collaborator with Chance the Rapper and went under the guise of The Social Experiment. But within a few minutes more live brass cuts in for some brutal harmonies alongside the sample, adding a much needed flare of originality.
“DesertSoundtrack” takes us back into pure instrumentals with meandering and percussive trumpet playing hop scotch with itself over a minimalist drum track. It is a moment of pause amidst the intense pandemonium, and yet by the end we lift off again into the thunder (literally—just listen for it).
The opening moments of “Electrical Ear Food” takes me back to Dave Brubeck, now rearranged to include some dense bass, wavering synths, and casual vocals. I feel like the year is 1955, I’m in the back of a cab on Broadway, and somebody has slipped something in my drink. A loud and swaying drum kit begins to peak out above the fog, but the last word is heard from that deep-bellied bass with few formidably gooey notes.
For a change of pace, though, “SunShowers” falls into our lap with some lazy day resonance. As unimaginable as it is, the vocals relax even more before some sweetly lo-fi whistling and light fingerpicking takes us out. The atmospheric dexterity of the group has pulled out all the stops. With the same swagger of an unreasonably sexy lullaby, “Underwater Blues” packages us up in a state of bliss. Compressed guitars crunch alongside the seemingly ubiquitous trumpeting, and right when we begin to expect a strong fade, we’re hit with a rich flavor of distortion from a soloing guitar.
But the final notes of the solo lack confidence, underscoring a potent message: the group we’re dealing with here is chock full of talent and yet still very much in infancy. Throughout the entire release there are obvious markers of amateur production value, as well as a group still fumbling to find its sonic footing. And yet, how can we complain? Purple Corporation go much further than most can manage so early in their career. In terms of musical showmanship, Mind Phonics is no walk in the park. At the very least, we can agree Purple Corporation’s road ahead is bright.
– Gabe Kahan
© Copyright http://www.psychedelicbabymag.com/2018
Gabe KahanPurple CorporationReviews