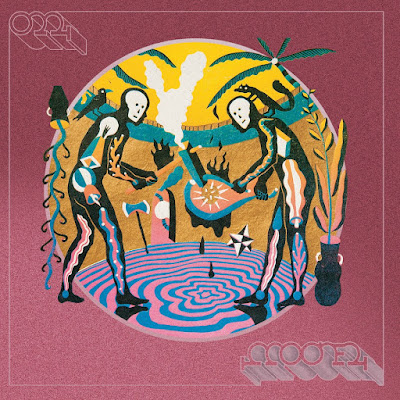 Second full length from Indonesian heavy psych superstars Mooner! The reaction to Tabiat, their debut LP, was incredible, it was sold out within days of its release. O.M. continues in the same vein as Tabiat, melding heavy psych with traditional Indonesian melodies. Featuring members of The Slave, The SIGIT, Sigmun and Sarasvati, Mooner are a supergroup of the Indonesian heavy psych scene, check out the mind blowing video for Kelana. O.M. is pressed on half and half vinyl with splatter. Tabiat is also repressed on a super cool, clear, color in color vinyl, so you can pick up both LPs for a great price, or add the Shark Move LP in the Indo psych triple pack available at Outer Battery Records.
In the words of main songwriter Rekti Yoewono, this second Mooner record takes a massive sharp turn from their first release Tabiat… “Indonesian kids got into older, cooler things from their cultural past like the 70’s Indo psych legends Shark Move (read interview here), due to certain vinyl collectors posting about it on Youtube, Instagram and Facebook. Without modern bands like Tame Impala, bands like Shark Move wouldn’t make sense to those kids. The original 70’s Indo bands didn’t exist until large rock bands like Deep Purple and The Rolling Stones came here in the early ’70s. Mooner had the idea to create something that would normally be considered musically uncool in Indonesia…introducing elements of a low class, common man style of music called Dangdut Koplo which was popular in the ’70s. This music is rooted in Indian and Bollywood music, but we incorporated that with elements of classic Indo rock. Si Dangdut became a grassroots music that evolved into a hedonistic low class disco style thing but conflicted with much of the strict Muslim traditions of the region. The album title O.M. means Orkes Melayu (Malay Orchestra) which was a prefix used with Dangdut groups like Jakarta legends, O.M. Soneta who sang songs of heartbreak, while O.M groups of the era usually sang songs about morally righteous/religious material and Dangdut Koplo was all about hedonism. O.M. by Mooner is a mixture of middle east traditional, Bollywood (perverted sexiness) and 70’s-80’s psychedelic hard rock.
MoonerPremieres