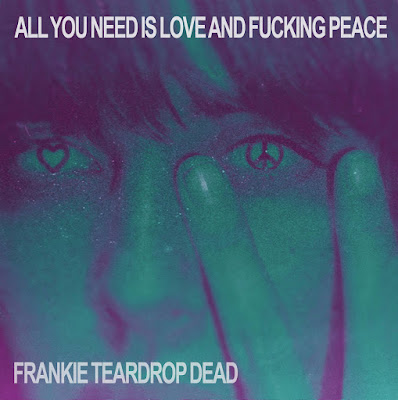 Frankie Teardrop Dead – All You Need Is Love and Fucking Peace (Panther Records, 2018)
https://frankieteardropdead.bandcamp.com/album/all-you-need-is-love-and-fucking-peace
Another band in love will adopting rather silly puns for their name (cf., Dandy Warhols, Brian Jonestown Massacre, et. al.), these dreamgaze Londoners don’t actually sound like their avant garde minimalist synth forebears (for the uninitiated, they’re named after a Suicide song). They’re also more like a neighborhood collective than a band, as their ranks occasionally swell to as many as seven different members. This musical variety (congas, synth, banjo, several guitarists and a couple of percussives) helps develop their wall of shoegaze sound into an occasionally disorienting headswirling maelstrom of psychedelic sludge we love so well here at It’s Psychedelic Baby Towers!
Three years in the making, their sophomore effort begins with ‘Short Story of The Mourning Sun’, which stealthily sneaks into the room on a pulsating vibe not too far removed from Spacemen 3 and the aforementioned BJM. The puns continue unabated with ‘Joy In Division’ (ouch!), which is also a million miles from its gloom and doom namesakes and boasts some bright and cheery “doo-doo’s” wrapped around its sinewy guitar lines and throbbing harmonics.
The curiously titled ‘This Window Lets The Sun In Day and Night’ boasts an infectious hook straight out of ‘I’m Not Your Stepping Stone’, but sidesteps any further Monkeeisms with some ferocious soloing, while ‘I Love You (Me Neither)’ introduces a sleepy blues groove heightened by some tasty harp blowing. For a band that wear their influences on their collective sleeves, ‘The Cure’ might be a tad obvious, but it’s a damn site better than quite a few of the Goth kings’ recent outings!
The title track is the longest, most sophisticated, and minimalist of the lot – it almost sounds like it was recorded out in the garage with spit and chewing gum, but it gives the band a chance to stretch out in full-on, hypnotic jam improve mode.
A lot of bands have sprung up in the aftermath of Anton Newcombe and his Jonestown Massacre lads (Jesus on Heroine, Blue Angel Lounge, Bad Liquor Pond, Rancho Relaxo, et.al.), but Frankie Teardrop Dead are in the top echelon and if you’re into laidback, dreamy psychedelia, they’re worth investigating further.
– Jeff Penczak
© Copyright http://www.psychedelicbabymag.com/2018
Frankie Teardrop DeadJeff PenczakReviews