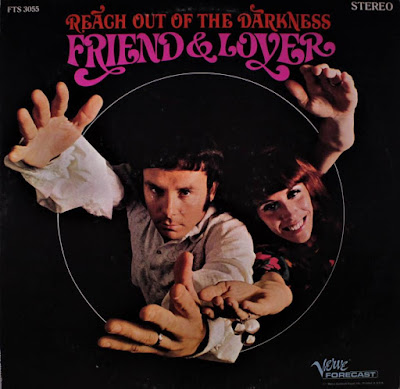 The year was 1968, incense was burning in every teen’s bedroom and even those such as me, who couldn’t play a musical note, carried around a green tambourine (acquaint yourself with the song “Green Tambourine” by The Lemon Pipers). AM radio still had their ‘standards & practices’ clauses, so when the folk duo Friend & Love delivered this sonically harmonic song, a number as enticing as Scott McKenzie’s “San Francisco (Be Sure To Wear Flowers In Your Hair)”, they jumped on it, pushing the song to the number ten Billboard slot that year.
“Reach Out of the Darkness” was a very safe haunting little number, one that everyone embraced as sort of goofy, yet we all new the words and sang along with a smile. It was a song that even parents of the day could wrap their arms around, bestowing the notion that if we’d just reach out of our own little space we might just find others of like mind.
Ahhh … but legends morphed as Jim [Friend] appears to be singing freak out while Cathy [Lover] is singing reach out. This has fueled an urban legend that Jim wrote the song while tripping on LSD and needed or was required to tone down the lyrics before the song could be released. Nevertheless, the inspiration for the song was derived from New York Love-In earlier that year.
Don’t go rushing to find this album, though it can be had for merely a couple of dollars, the music is simply more of the same, though not nearly as good. This is one of those songs that will stand as a snapshot of the times, a gem that managed to shake itself from the haze and find a place in the hearts and minds of all those who were there then.
– Jenell Kesler
© Copyright http://www.psychedelicbabymag.com/2018
Friend & LoverFrom The VaultJenell KeslerReviews