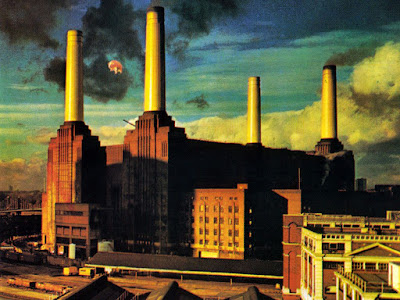 An album we need now more than ever …
It’s taken me a very long time to consider both the effects and truth behind Pink Floyd’s release of Animals in 1977, though now, already knee deep into the 21st Century, it’s impossible not to hear the apathetic lines: “If you didn’t care what happened to me/ And I didn’t care for you/ We would zig-zag our way through the boredom and the pain/ Occasionally glancing through the rain/ Wondering which of the buggers to blame/ And watching for pigs on the wing,” as a writing on the wall.
Of course this all had a different sense and ambition during the mid 70’s, when so many people where apathetically numbing themselves with cocaine and barbiturates, perhaps as an insulation or reaction to the high energy of the 60’s or the winding down and results of the war in Viet Nam, where I assure you, it felt rather good to sit comfortably numb. Yet now, today, almost prophetically, society, especially in America is fractured, divided, and nearly at war with neighbors, parents, even husbands and wives, over ancillary views and values that have established unmovable lines of demarcation, where a dark insanity has swept over our planet, hiding behind the locked doors of our governments and the reactionary forces of religion and the right wing are asserting their revenge for everything beautiful that ever blossomed from the age of reason and hope, where in this pseudo allegory divined from George Orwell’s “Animal Farm,” with all of its oversimplification and enlightenment coming to fruition, where you’re either a sheep or a dog.
Animals captures the syntax and construction of these ideas eloquently, lacing in allegorical coded messages within the construct and complex songwriting, over which David Gilmour soars with majestic guitar chords that make Animals one of the most progressive rock albums of all time, though there are many Pink Floyd fans who would want to shrug off that genre, and see the album as nothing more than an adventure to a time and space, that until now, existed only once before in recent history.
Animals was very much a product of its time, a fully formed and masterly developed psychedelic opus to humanity, or lack thereof. Though with that in mind, the parable, fable, or space time sequence, does deliver a ray of hope at the end, where even amidst the trials and tribulations of the times depicted throughout the release, humans have always been inspired and managed to come together for the greater good and salvation of their species.
Confronting political policies head on, Animals was so deeply steeped in dynamic and expansive music that few heard the actual cries, and in not hearing those distresses, we arrive forty years into the future, again, face to face with the same contradictions, the same lack of empathy, and a new drug crisis, this time one more real than ever, where opioids are not allowing users to sit comfortably numb, but demanding ever greater allegiance.
As with all Floyd albums, this one too is as absorbing as a sponge, but gone are the warm hazy melodic saxophone imagery captured on Dark Side Of The Moon, replaced by and fraught with an endless succession of Gilmour guitar solos that ebb ever forward, yet come across as sonically brittle, thin, with an almost apologetic nature. Even the vocals don’t harmonize with the lofty aspirations of before, sounding more stinted, more wooden and hollow, lacking a sense of depth in both inspiration and aspiration, where what’s being delivered comes off as sincerely manufactured and devoid of all emotion along with the ramifications of such genuine feelings … though perhaps, in reality, that’s what the band had in mind, with Pink Floyd using these effects on purpose to empower a reaction, and therein a response. Of course this begs the question as to whether Floyd were coming apart at the seams, and as with all of their albums, Animals too is very autobiographical, where after all, at the time, we had no idea that we would shortly be running headlong into The Wall, and its concept of total defeatism. 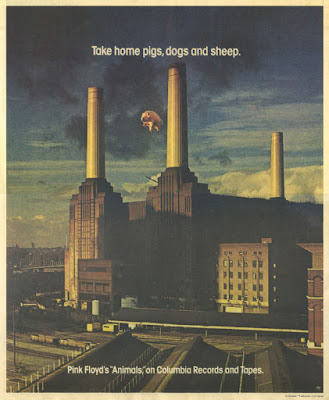 When one considers the notion of a cramped societal psychology, even in the context of a band, Pink Floyd have always been at the height of their game when communicating the needs of one society being imposed on top of another, where those who preceded the last struggle for breath, where technology not only becomes quickly outdated, but outdates those who can’t, won’t, or don’t keep up, and even then, the realization of age creeps in on all fours, laying waste to a world once treasured. Again, this could certainly be a reflection on the the rise of punk music, its disgust and disregard for all that came before, though due to its fragile makeup managed to last an even shorter lifespan than did that of these sonic psychedelic sojourners.

Animals is a dynamic and impressive album on all levels, though sincerely, it does mark the beginning of the end for the old heads who embraced Pink Floyd, making way for a new generation who don’t understand the concept of a double negative, yet still, have the power and wherewithal to effect profound change, and all to the soundtrack of an album we need now more than ever.
– Jenell Kesler
© Copyright http://www.psychedelicbabymag.com/2018
From The VaultJenell KeslerPink FloydReviews