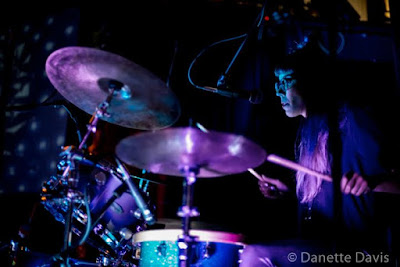 Human Ottoman is a prog rock band from Portland who “actively ear-pillage” the Pacific Northwest US. Their lineup features Julian Kosanovic playing cello, Grayson Fiske playing vibraphone, and Susan Lucia playing drums. The trio first met during music school, and focusing their classical training and jazz sensibilities, they have created a unique sound that transcends the boundaries of multiple genres.
The set began with a dynamic rock rhythm, Fiske’s vibes loud and distorted. Complimented by a psychedelic light show that featured a blue sun, Kosanovic soloed gracefully on the cello with Fiske’s distorted vibes providing a heavy rock sound. While Lucia’s playing was highly syncopated, her time was flawlessly solid. 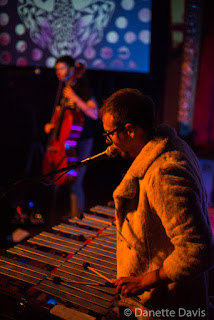 The band alternated between complex odd-time rhythms, straight ahead rock and trip hop. In dynamic polyrhythm, drums and cello played with and off of each other. The trio incorporated electronics and effects, each of Fiske’s vibraphone keys individually augmented with pickups. His vibes could at one instant be clean and organic sounding, the next dirty with deep low end feedback tonalities. The mood changed chameleon-like from intense and upbeat, to melancholic, to mind-numbingly psychedelic. Masterful young players, Fiske and Kosanovic performed intricate melodies against Lucia’s skillfully controlled explosiveness, crescendoing chaos while kindly complimenting each other’s musicality. Tightly orchestrated yet at times intuitively improvised, when the show ended, they had given their audience something new, organic and honest. 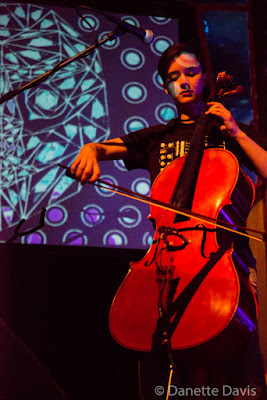