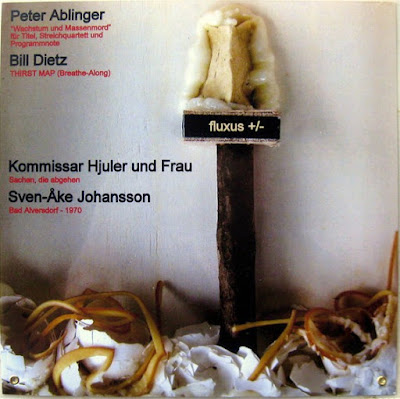 “To bring the hidden part to the foreground”
Wachstum und Massenmord, Peter Ablinger’s ‘rehearsal piece’, is now released as part of Kommissar Hjuler’s Fluxus +/- serie, on Ablinger’s suggestion, in combination with Bill Dietz and Sven-Åke Johansson.
Why did you choose the piece Wachstum und Massenmord for this split LP?
Kommissar Hjuler is the producer of the label. He asked me if I would like to share an LP with him an others. I asked back, if I can propose some of the ‘others’ and I suggested Bill and Sven.
This LP is released in Psych KG’s Fluxus serie. Is fluxus the art form you feel most related to?
The edition is part of the series Fluxus +/-, which I read as “more or less Fluxus”, or “Post-Fluxus”. I do not consider my work as Fluxus at all. But with certain aspects – let’s say the conceptuality and the idea of extending music to all possible media – I feel related.
You made several versions of Wachstum und Massenmord, for string quartet, but also for orchestra, so why did you use the string quartet version for this LP?
There is only one version of the string quartet – other versions you might have heard about are just different INTERPRETATIONS of the same piece. And the orchestra piece is also not a version, but a very different PIECE itself.
Can you explain to me, in your own words, what this piece is about?
I hate explaining my music. And any way it is not possible. But I will still answer something: one thing that normally is missed is the fact that the piece is “for Title, Programnote and Stringquartet”. These 3 elements for me are equally important. They constitute the basic “composition”, which is, what I was putting together…
Certainly the most obvious fact of the piece is, that the string quartet-part is presented to the musicians only when they arrive at the concert. Which means, that the performance is not rehearsed beforehand but is a rehearsal. The piece is a rehearsal.
How do you look back at the performance of Wachstum und Massenmord that was used for this recording?
At the premiere of the piece in Donaueschingen 2010 there have been 6 “premieres” played by 2 different string quartets, ‘Diotima’ and ‘Jack Quartet’. For the LP, I have chosen the shortest of this 6 recordings played by ‘Diotima Quartet’. Almost all of the performances were stopped by the audience through rumor and clapping. In the chosen interpretation you can clearly hear how the performers try to continue while the audience is forcing them to stop. Thus the audience reaction has become part of the piece.
In a live review, this piece was called ‘a scandal’ and ‘a provocation’. Was it meant to be a provocation, or is that ‘the problem of the audience’?
The rehearsal of a piece is a necessary part of a concert. I wanted to bring this usually hidden part to the foreground. And mainly I wanted to activate that, and how, the rehearsal creates a different ‘presence’ – as opposed to the normal concert presence. Therefore this part of the piece is about ‘presence’. Whether or not the audience receives this question as a provocation is not part of the composition.
By putting a live performance on record, you change the format. Do you think that, by changing the format, you also change the way people listen to it?
Certainly. The issue of ‘presence’ gets lost a bit on the recording, or becomes a document of lost presence.
Do you see Wachstum und Massenmord more as a performance than as a music concert?
I don’t clearly see the difference of a performance versus a concert. or: for me it is ‘a concert in a critical state’. For sure, any audience member will receive a different view on the things happening. Non of these views can be complete. Even my own view on my own piece is not complete. 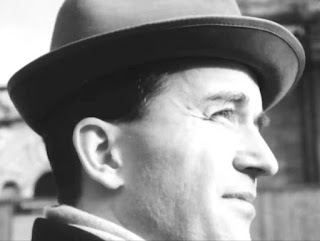 This LP is released in an edition of 75 copies, with some versions in even smaller editions from 5 to 3 copies. Does this album becomes more of an art object than a music record this way?
This is not my decision. You better ask Kommissar Hjuler about that. I guess it is an economic thing as well: small editions cost less. And Kommissar Hjuler tries to turn the obstruction into an advantage. For me it is anyhow important that the piece can exist and can be performed also outside such an art object.
http://ablinger.mur.at/
– Joeri Bruyninckx
© Copyright http://www.psychedelicbabymag.com/2017
InterviewJoeri BruyninckxPeter Ablinger