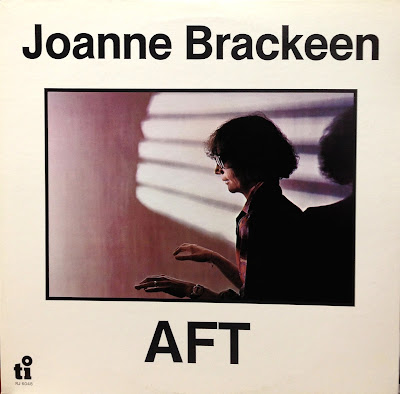 Joanne Brackeen – Piano
Clint Houston – Acoustic Bass
Ryo Kawasaki – Guitar
1.     Haiti B
2.     Charlotte’s Dream
3.     Dreamers
4.     AFT
5.     Winter is Here
6.     Green Voices of Play Air
The former Joanne Grogan is a unique player. Using Monk and McCoy Tyner as starting points, her music has moved from early gigs with Dexter Gordon and Harold Land through work with Dave Leibman and Woody Shaw before becoming the first female Jazz Messenger and enjoying a celebrated stint with Stan Getz. In 1975 she began releasing her own recordings, and she has helped to define and redefine the piano trio since then. Aft is one of her lesser-known recordings and yet one of he most challenging and scintillating.

“Haiti B” starts with a Tyner-ese fusion groove and Kawasaki’s guitar fanfare, leading to his McLaughlin-meets-Zappa guitar solo. Houston plays a remarkable arco solo, inventive, well articulated, atonal, full-toned (not scratchy), and at times reminiscent of Mingus’s 1964 Paris recording of “Mediations For Integration”. A remarkable player.
“Charlotte’s Dream” is a fast bop tune with a complex B-section. Clint plays a big-toned solo that shows him the equal of Stanley Clarke in the speed department. Ryo is inventive and Brackeen is stunning. This is a group that listens to each other.
“Dreamers” – a mellow yet dramatic legato 3/4 feel turns into a bouncy jazz waltz. Avant-lyrical piano, driving guitar and a gentle bass solo leads back to the head. Short and sweet.
“Aft” starts with a bizarrely playful, Ornette-like head, and then off to the races! Houston is a one-man rhythm section behind endlessly inventive Brackeen. Indeed, Clint is so strong throughout this album that you don’t miss the drums at all. You really don’t. Next Kawasaki builds his solo on a series of sequences. Houston’s unaccompanied solo is a marvel. This ride should be studied by young bassists as an example of how to groove while tearing off heads.
“Winter is Here” – lyrical Ryo visits Joe Pass territory and Houston shows his uncanny telepathic connection to Brackeen’s piano (they were destined to work together many years, including a trio performance with Freddie Waits at the 1983 Kool New York Jazz Fest) before yet another unique and powerful bass solo, which harkens back to Rufus Reid’s beautiful virtuoso statement on Eddie Harris’s “Summer’s On Its Way”.
“Green Voices of Play Air” (does anyone have a better sense for titles than Joanne Brackeen?)…stately free piano leads to a sunny bossa groove that just cries for a Pharaoh Sanders tenor statement. Ryo and then Joanne and Clint give crisp concise statements. Tasty and playful.
I have often thought that Joanne Brackeen and Jessica Williams should  work together. Two pianists fed by the same poetic bloodjet, virtuosos who are equally comfortable with standards, Monk, Coltrane and beyond, and who would find much to speak of together…where is the visionary producer who could make it happen?
Brackeen’s work is always challenging and satisfying. Buy this disc, listen and listen again. Trust me.
– Kevin F. Wozniak
© Copyright http://www.psychedelicbabymag.com//2016
Joanne BrackeenKevin F. WozniakReviews