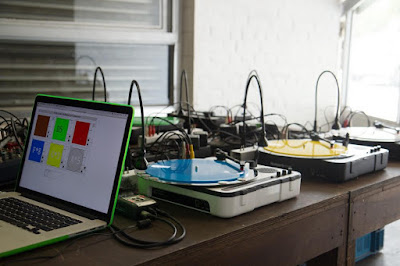 A live recording of a pretty weird DJ set
Remörk’s head scratching debut album ‘Principium 2.1’ could have easily crashed under its own weight, too full of ever changing versions of the same idea. But it didn’t. 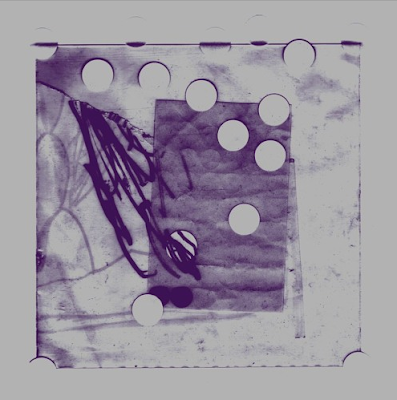 I’ve been following the principium story on your blog, which goes back to the summer of 2012, so four years ago. Short version: first it was a one octave Casio keyboard, then it became 12 10″ records, then it became an 8 hour performance and eventually now a 12″ LP. This is the short version, can you give me the full story?
Kris Delacourt: Well actually, it started out as an artwork, or rather a series of artworks. At least that’s where the initial form and the name came from.
The works are by a friend of mine, the Belgian artist Vaast Colson. He made these beautiful pieces where he used tiny paper sticker dots, you know the ones, the kind that most art galleries use to denote which works in a show have been sold. Office material really, those colourful little dots.
What he did was draw a bunch of random lines across the sticker sheets, and since there’s 8×12 stickers on a sheet you end up with stickers with tiny line segments on them. Line segments he reassembled into new shapes and new lines. It’s all pretty nonsensical in a way I guess, especially if you try to put something like that into words, but it’s also really beautiful, and quite fragile. Don’t know, it just rang poetic to me. 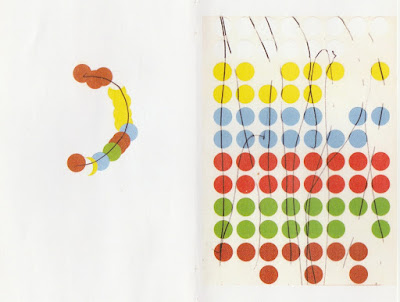 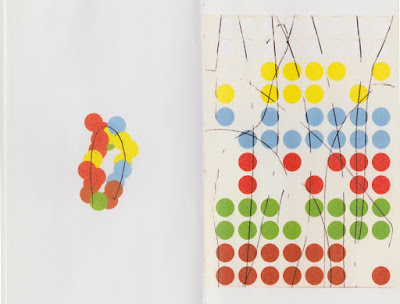 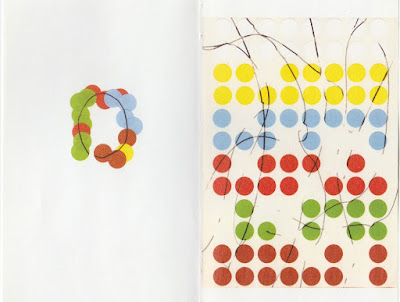 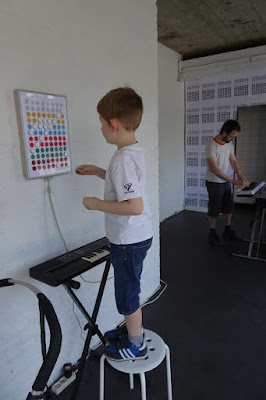 Do you think that, by bringing it back to an LP, you’re making it easier for the listener? Were there people who actually listened to the whole 8 hour performance? Do you think that listening to an 8 hour performance demands another kind of concentration from the listener than listening to an LP?
There were some people there that sat through the whole thing, yes. But I’m not sure if it is at all possible to listen with concentration to 8 hours of something like this. And that was never the question either. It was continually shifting, so it didn’t really have a beginning or an end – you could drop in any time you liked. But it was pretty intense, so yes, this record is probably the light version. Still, not sure if it is easy listening at all, although I think it has a beauty of it’s own.

Weren’t you afraid at some point that this whole idea would grow over your head, that it would become too complicated, too smart, too conceptual?
I guess there was the point where I decided to just do a 10 minute organ improv, that was a bit of a turning point. I could have gone for something more ‘correct’ in terms of concept – I don’t know, pure sine waves or something. The improv might be one of the major flaws, actually, conceptually speaking. But I really needed a break from thinking it over and just do something… plus, it adds a much needed layer of spontaneity that works beautifully, not in the least musically, so no regrets. I like working with concepts a lot, as a starting point, but I’m also interested enough in the results to loosen up the concept if I feel it’s needed.
I could say that the 10″ records were vinyl records as a tool, and that this LP is a vinyl record as a product. What you think about this statement? How do you look at the function a piece of vinyl can have?
The 10” records have all been sold as well, so they’re somewhere on middle ground – they were intended as a release, and therefore a product, just as well.
But they do form one big piece, and as far as final forms go, I guess you could consider that performance the final form of that particular piece. That’s also purely pragmatical: now they’ve all been sold, it’s going to be very difficult to get all 12 of them together again for a second performance. It really was a one time event, with the vinyls as a tool, yes. Of course, taking what is essentially a reproduction medium, and turning it into something of an instrument in it’s own right again, that’s nothing new.. think hip hop, turntablism, even things like the mellotron did that. But it’s still a relevant idea to me, this kind of creative misuse.
You release this album as a Remörk album, but there were more people involved in this project than just you: there’s Vaast Colson, Peter Flenger and Dennis Tyfus too. So do you see this album as a solo record or as a collaboration?
I do look at it as a solo thing. You know, the music on the record came from a performance I did, based on a concept I came up with. Now, I never would have though it up if it weren’t for Vaasts initial invitation, or for Peter’s asking me to do a record, or Dennis wanting to present it in Antwerp, that whole chain reaction, so in that way it’s definitely the result of collaborating with all those people. But Vaast for instance refuses to regard it as his doing. He always stressed, right from the start, that any interpretation I gave of his work was no longer his work. And I follow that. They’re just new pieces in their own right.
Peter and Koos asked me to do a record because they run a record label and they want to release stuff they think is interesting. That’s awesome, and I’m flattered to be a part of that, but in a way it’s also what record labels are supposed to be doing, no? We worked on the packaging together, and it looks amazing because of them. But musically, I still feel it’s my work. And the same goes for this record on Ultra Eczema: I have to say I’m really happy we finally got an Ultra Eczema release together, it’s something Dennis had been asking for for quite some time… he’d actually given up asking. But now with this thing it just seemed to fall into place perfectly.
When Joseph Beuys was asked why he hated the term ‘conceptual art’, he said: “Because a concept, an idea is a starting point, not a final form. If you stick to the concept, you miss out on the creative aspect, which should be the most important part. Otherwise you’re not an artist. Art is not pinning things down. Art is letting things go, let it flow”. Does this sound recognisable to you? And how would you relate this quote to your LP?
Not having to execute ideas into a physical and therefore flawed final form was the whole point of conceptual art, no? The notion that an idea can be just as valid and just as creative as its execution.. but anyway.
I for myself am always glad if I manage to turn an idea into a physical form. Did I mention I tend to overthink things? So I don’t think I belong in the conceptual art section. But then, I don’t fully agree that you miss out on creativity by sticking to a concept. Coming up with a concept can be as much a creative process. And sometimes, by sticking to it, you end up with the most unexpected results – adhering to rules you impose on yourself makes you do stuff you would never have decided for yourself. It can make you go against your natural inclinations, which does not always have to be a bad thing. It can free you from repeating yourself, from your own mannerisms. That’s just another way of letting things go, of giving up control.

The Ultra Eczema site refers to this record as your debut LP. Does it feel like that for you too: as your first ‘real’ album, as a statement?
I think I would consider that series of twelve ten inches my vinyl debut.. but maybe because it was 12 different records or in ten inch format, that it doesn’t really count? Or maybe Dennis thinks of that series as a tool more than a product. Still, the Ultra Eczema one is definitely the first record that is more widely available, and much more of a pure record than an artists’ edition, so I know what he’s saying. And a statement.. I don’t know. I don’t think of it as a manifesto or anything. It’s a document of what I’m happy to be working on at the moment, and hopefully it’s something that others can enjoy as well.
Do you see this as a drone record? Or as a collage record?
If you force me to choose between those two, then drone. I tend to associate collage records with cut and paste editing, jumpcuts, going from one atmosphere to the next in no time.. I don’t feel this record has that. Quite the contrary. The only thing remotely close to jumpcuts that are on this record were due to the electronics of the installation, the sensors turning the sound on and off. But they were live events, not editing choices made afterwards. So this is very much a straightforward live recording of a pretty weird DJ set, if you will. And even though it has strong rhythmic patterns, the underlying harmonies and atmosphere shift quite slowly. So more drone, definitely.

Do you think this LP would be also enjoyable if someone would listen to it without knowing a single thing about the whole concept behind it? Or do you even think you would have failed if it wouldn’t be an enjoyable record without the concept?
I certainly do hope that it’s enjoyable.. like I said, I know it’s not easy listening per se, and some might probably find it boring at first try, with the tempo being the same for the whole record and all. But I did try to select bits that I thought had a beauty or a strong appeal to them, an interesting evolution or whatever, so much so that I hope they can survive as musical pieces in their own right. aiming for the best of both worlds there.
http://remork.blogspot.com/ 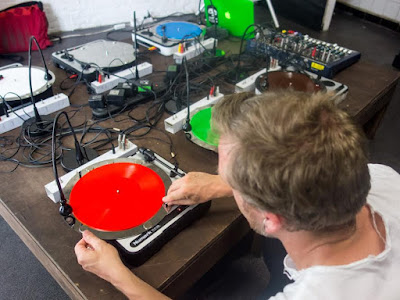