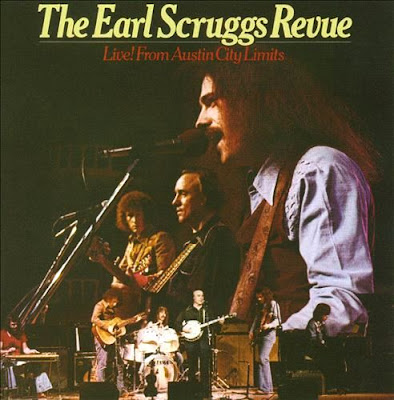 I first discovered Earl Scruggs as a wee
lad in the 70s. One night I came across a TV show I’d never before seen called
“Austin City Limits”. The guest that night was The Earl Scruggs Review, a
country/rock/bluegrass band made up of five long-hairs in jeans and a
grey-headed banjo player in a western shirt. It turned out that three of the
five longhairs were the sons of Earl the banjo player. This was remarkable
because I’d never seen an inter-generational rock band other than Jefferson
Starship and The Partridge Family.
As the hour continued on, it became obvious
that this old-timer was no Papa John Creach. His banjo was virtuosic, even to
my un-country-fried ears. I liked the Dylan covers, the originals and even the
bluegrass instrumentals (which I viewed as square-dance music). Admittedly,
Gary Scruggs wasn’t much of a singer but his bass playing made up for it, and
the rest of the band were tight and talented as well. Some months later the
Columbia House catalog arrived, featuring The Earl Scruggs Review Live! From
Austin City Limits. Needless to say I ordered a copy and actually paid for it
(no one ever paid for Columbia House products). As a result “I Just Can’t Seem
To Care” took up permanent residence in my sub-conscious (“Packed my bags while
you lay sleeping/Left a note upon the door…”). And the fast version of “I Shall
Be Released” still sounds more “right” to me than Richard Manuel and The Band (much
as I like them).
I found out later about “Foggy Mountain
Breakdown” which defined and revitalized the three-fingered banjo style and
“The Ballad Of Jed Clampett” (from the “Beverly Hillbillies”) which brought
that style to the 60s generation. Maybe because Earl was an instrumental
virtuoso rather than a singer, his death hit me in a different way than the
passing of most icons, who are usually singers.
I never became a huge fan of bluegrass or country music, but I can
appreciate a virtuoso player who followed his muse and moved the world. Goodbye
and thanks, Earl.
Review by Kevin F. Wozniak/2016
© Copyright
http://psychedelicbaby.blogspot.com/2016
Kevin F. WozniakReviewsThe Earl Scruggs Revue