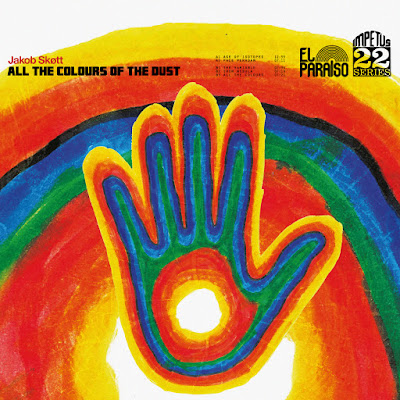 Jakob Skøtt – All the Colours of the Dust (El Paraiso Records, 2016)
Listen: https://soundcloud.com/elparaiso/sets/jakob-skott-all-the-colours-of-the-dust-full-album

Causa Sui drummer’s third installment in his “drums versus synthesizers” collection may be his most “outre” entry in the series, channelling Miles and Coltrane into a set of multi-layered solo jams that take on a life of their own when placed on top of and alongside each other. What could easily have deteriorated into headache-inducing monotony (do we really need 45-minute drum solos in the 21st century?) becomes a study in the capabilities of montage, mashup and studio manipulation of sound into a cohesive whole. His synth lines serpentine around his drum solos so seamlessly, it’s hard to remember this is all coming from a single musician!
While the ultimate result is a hypnotic, almost meditative wall of sound, there are distinct elements of free jazz, reined in by melodic synth passages that ground the listener into a focused enjoyment of the possibilities of multi-track recordings synthesized (pun intended!) into a fairly linear musical footprint.
The funky, almost “80s’-styled dance grooves of ‘Face of Peradam’ wouldn’t be out of place on a Talking Heads album, while ‘Iron Nebula’ flutters into industrialised chaos and manufactured noise that’s as addictive as it is melodic, right up to its dreamy, spacey coda. I’d swear the title track opened with a little bong hit pick-me-up, which invigorates Skøtt into tossing in whatever remains of his musical kitchen sink, emulating the Speak & Spell bleeps and bloops that anchored Experimental Audio Research’s fascinating circuit bending on Data Rape nearly twenty years ago.
Deadheads who resisted the call of the w.c. during those extended “Space Jams” will totally dig the vibe Skøtt lays down across these five lengthy tracks, while others can imagine assembling their own dream jam session with “Bonzo” Bonham flailing away at a half-hour ‘Moby Dick’ in one channel while Keith Emerson and Rick Wakeman immerse us in a bath of synth and keyboards over in the other. Not necessarily something you’ll put on to get the baby to sleep, but it won’t clear the room at parties either. A musical adventure that is rewarded with deep-breathing exercises, an open mind, and a penchant for head nodding, toe tapping, and a little booty shaking during your listening sessions.
Review by Jeff Penczak/2016
© Copyright http://psychedelicbaby.blogspot.com/2016
Causa SuiJakob SkøttJeff PenczakReviews