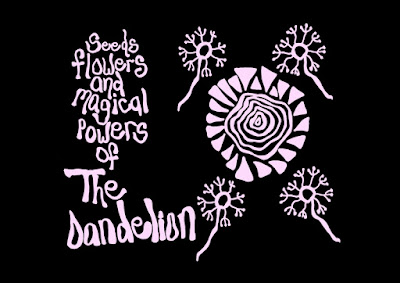 The Dandelion – Seeds Flowers and Magical Powers of the Dandelion (2015)
Listen: https://thedandelion.bandcamp.com/album/seeds-flowers-and-magical-powers-of-the-dandelion
Channelling mystical garage psych flower power vibes from the mid 60’s, Australia’s The Dandelion, are perfectly poised for a love-in, complete indie chunking California guitars, a mystical floating eastern atmosphere, frantic folky fluting, fuzzed reverb, and a teetering structure that dances so close to the edges of parody, that at times I wondered how they hadn’t fallen into the abyss.  Even the title of the album caused my eyes to roll as I began to sort though some of the longest album titles I could remember from those heady days.
This is one of those bands who are a lot of fun, though not to be taken too seriously as they attempt to charm the listener into their vision of cosmic pastures laced with sunlight and love.  They do have the ability to shine with spellbinding style, grace, and at times elegance, with their breathy intoxicating vocal deliveries and boundless energy.
I find all this revitalization of the psychedelic heyday to be charming, and a welcomed addition to my musical environment, as so many of these bands seem to actually get the sound and atmosphere correct, as opposed to those from the times, as all this was a work in progress as it was happening.  Having said this, I want to give pause for what the 60’s were really about, sincerely wondering if these new visionaries actually have visions, or are these merely acid flashbacks on a cosmic level?  With all of this leaving me to hope that these new travellers are sharing some sort of collective emotional memory for a time that could have been so much more than it was.
Review by Jenell Kesler/2016
© Copyright http://psychedelicbaby.blogspot.com/2016
Jenell KeslerReviewsThe Dandelion