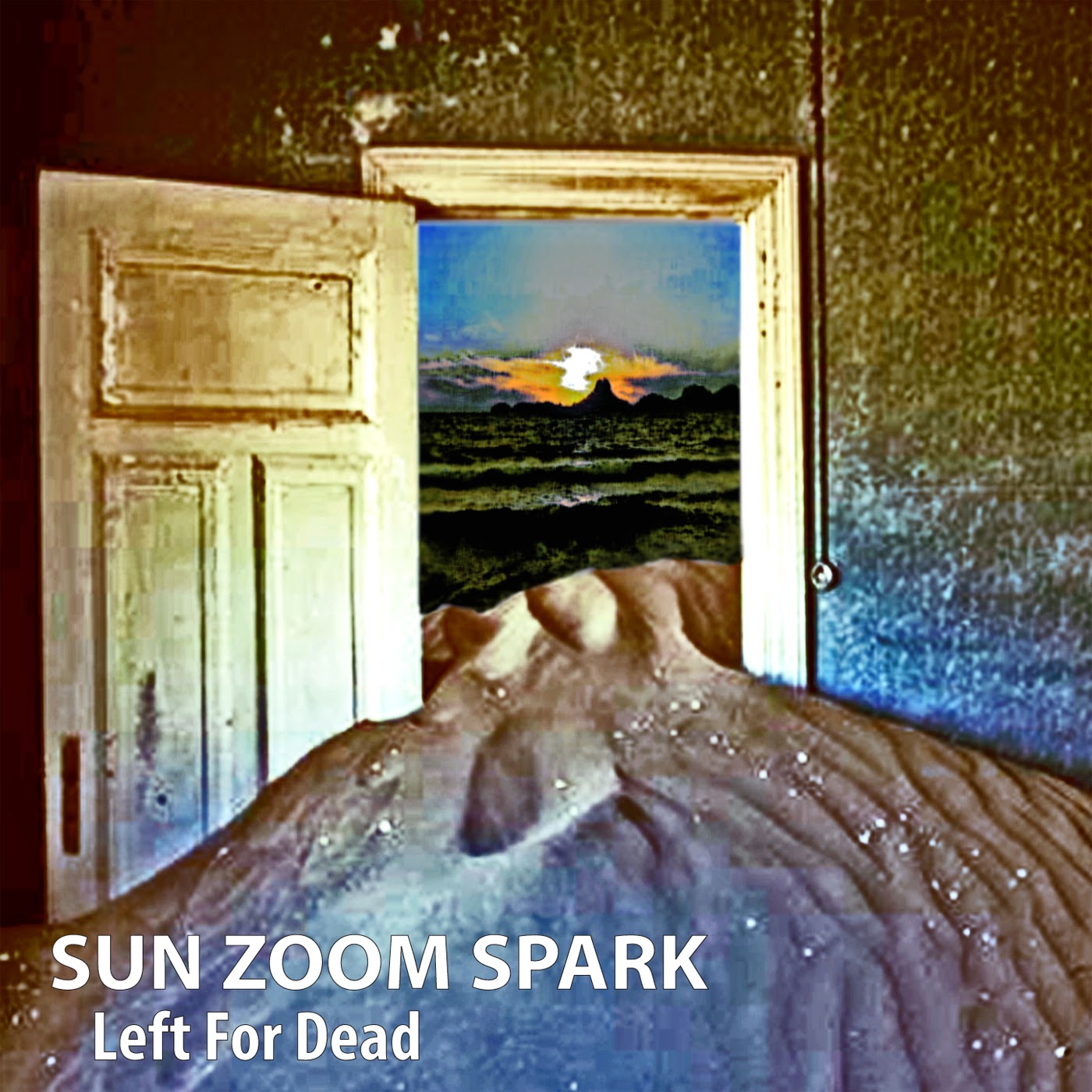 Sun Zoom Spark “Left For Dead” (SlowBurn Records, 2014)
“Left For Dead” began its life 13 years ago when poet John Galuska invited the trio to contribute music to accompany some poems he wrote and an electronic piece of music he had recorded. Under the influence of strong psychedelics, the band recorded an hour of improvisational music and the project was left to linger. Last year, Sun Zoom Spark guitarist Eric Johnson revisited the project and edited their recording and added some overdubs, mixed and mastered the album and now it is available for you to wrap your own head around.
The original psychedelic jam has been edited into distinct segments which Johnson gave titles to, and Galuska is also on hand with exceprts from his lengthy electronic piece that gave the project its name. But the affair begins with the ominous ‘Put Out All The Sounds’, which is sort of an Overture to lay the groundwork for the journey ahead. Drummer Bryan Kohl lays down a funky backbeat to propel ‘Round Again’ through a series of electronic bleeps and bloops that are like twinkling stars bouncing off your synapses as you journey through the cosmos.
Johnson tinkles his way through a mellow, jazzy piano riff under a searing guitar solo and some progressive keyboard swashes for the lazy, dreamy ‘Left For Life’, which leads into the first of Galuska’s three electronic ‘Transmission’ pieces. The band hit their stride with the enveloping chaos of ‘Masterpiece By Midnight’, full of flailing drums, wailing guitars, and sailing keyboards which is satiated by another of Galuska’s eerie electronic ‘Transmissions’ (this one a bit like those small furry animals that Roger Waters was grooving along with in a cave with a pict back in his “Ummagumma” daze. This brings us to the album’s title track and 17-minute centerpiece that again begins with a catchy-yet-simple riff reminiscent of Miles’ “Kind of Blue” which slowly morphs into a supernova of mind-assaulting electrical explosions, bubbling brooks, haunted house organ, and eerie, pant-shittin’ sound effects that sound like something’s trying to gnaw its way into your brain to feast on a few fried brain cells for dinner. Mmm, mmm, good! Thank goodness for the trippy, mellow respite that is ‘If We Wait’ to help us float safely back down to Earth! This is closer to vintage Black Sun Ensemble (ca. “Lambent Flame”) than the heavier elements earlier in this album.
In addition to the Galuska piece, the trio took a preliminary run through Black Sun Ensemble’s Eastern-tinged, Arab-flavoured ‘Jewel of The Seven Seas’ (featuring some tasty banjo from Johnson), which would eventually find a home on their “Starlight” album, released several years later on the collectable Australian label Camera Obscura. Hearing this early incarnation is a revelatory experience in understanding how the late BSE guitarist Jesus Acedo’s mind worked – taking the vestiges of the track and inserting his personality…and acid-fried solos!
The whole endeavor is one long, groovy, psychedelic trip, akin to both Bardo Pond’s Hash Jar Tempo collaboration with Roy Montgomery, with a little taste of those vintage krautrock grooves from the likes of Brainticket and Ash Ra Tempel, as well as nods in the general direction of Mushroom and Black Sun Ensemble, whose membership at various times included members from Sun Zoom Spark. So if you’re a fan of any of these projects – or exploratory, improvisational hallucinatory “head music”, you owe it to yourself to check out the latest from the always inventive Sun Zoom Spark.
Review made by Jeff Penczak/2014
© Copyright http://psychedelicbaby.blogspot.com/2014
Jeff PenczakReviewsSun Zoom Spark