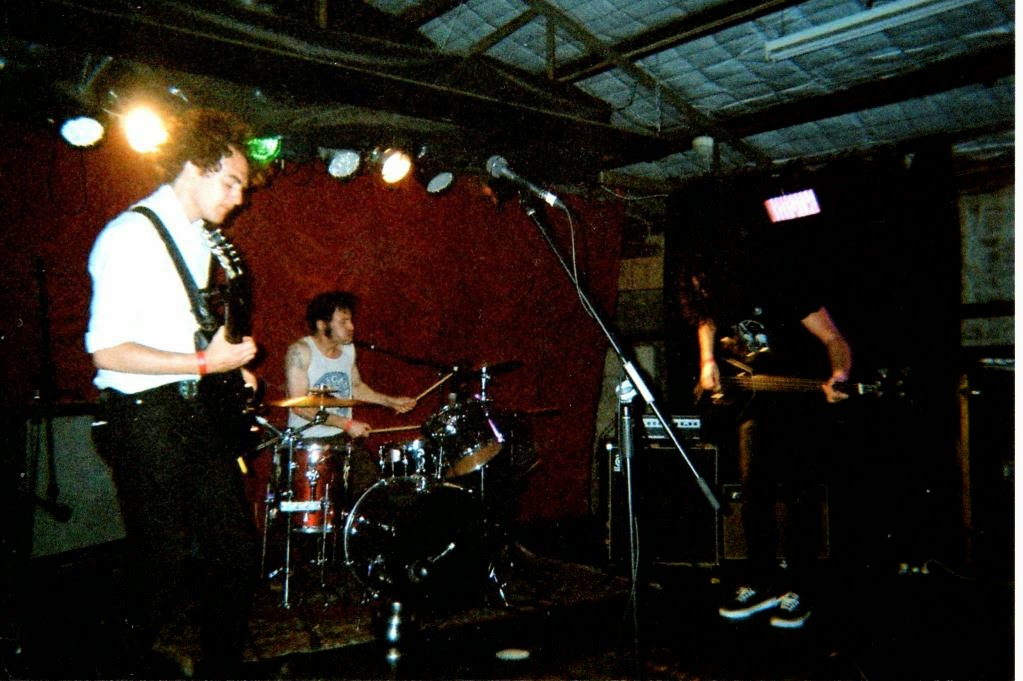 © pregnantagain
I don’t usually fuss too much over where a band’s from,
there’re a few places that are buzz words with me the last couple of years
though, and San Francisco and Australia are at the top of that tiny list.  Combine those two elements in one band and I
was instantly intrigued.  With members
split between California and Australia, Shovels are not only a band that
straddles the globe, but genres as well.
Fussy psychotic fits of reverberating distortion pierce and then shatter
the veil of clamoring drums and thunderous bass glimmering out of a smoky fog
in the desolate landscape of a bleak apocalyptic cosmos.  Putting an exact label on what Shovels is
doing is a little bit difficult for me, there’s equal parts psych, insane noise
rock and tightly honed garage rock, all comingling and interbreeding to birth
the twisted mass of sound and coordinated fits of psychosis that is
Shovels.  Their debut offering, the
self-titled full-length Shovels for Homeless Records, is nothing short of a
brash, dissonant masterpiece of confrontational distortion and gnarly
fuzz.  Equal and heavy helpings of
garage, psychedelia and punk fusing into an unholy union of sound, I’m not
going to dwell on trying to describe exactly how Shovels grabs you by the balls
and feverishly drags you along for the thirty minute ride of your life,
though.  How it sweeps you off of your
feet, envelopes you in this warm cozy blanket of utter chaos and then sends you
along on your way, seemingly no worse for the wear despite the fact you feel
like you’ve just been shot out of a cannon at a brick wall.  What I will do, however, is urge you to click
the link below and discover one hell of a band for yourself.  There’re plenty of details below for the
inquisitive mind, the important thing though, is that you check out some tunes
and cop yourself an album because being limited to only 350 copies this thing
is not going to be around long…  Don’t
live life in regret.  I know I’m not.
– Listen while you read:  http://shovels.bandcamp.com/ 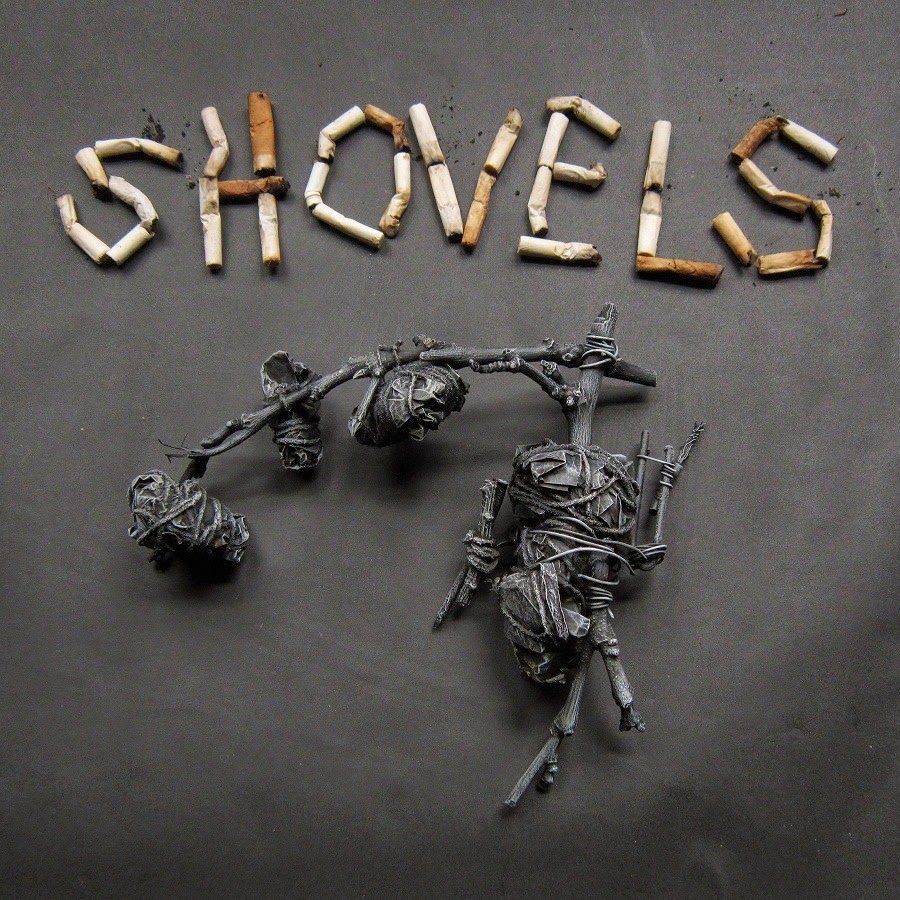 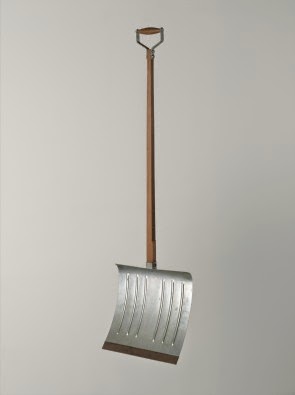 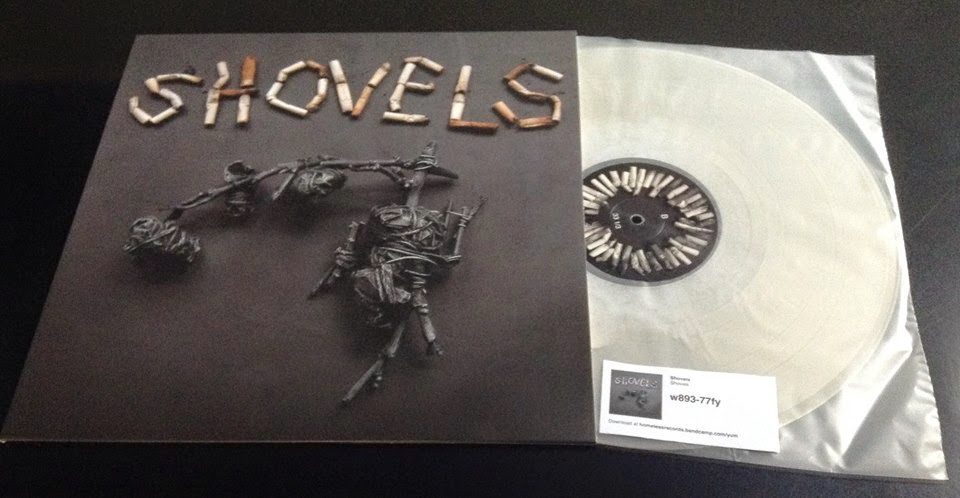 Mike:  HomelessRecords released the album on vinyl in June 2014.  Everyone involved, from the recording to the
release, was a pleasure to work with. 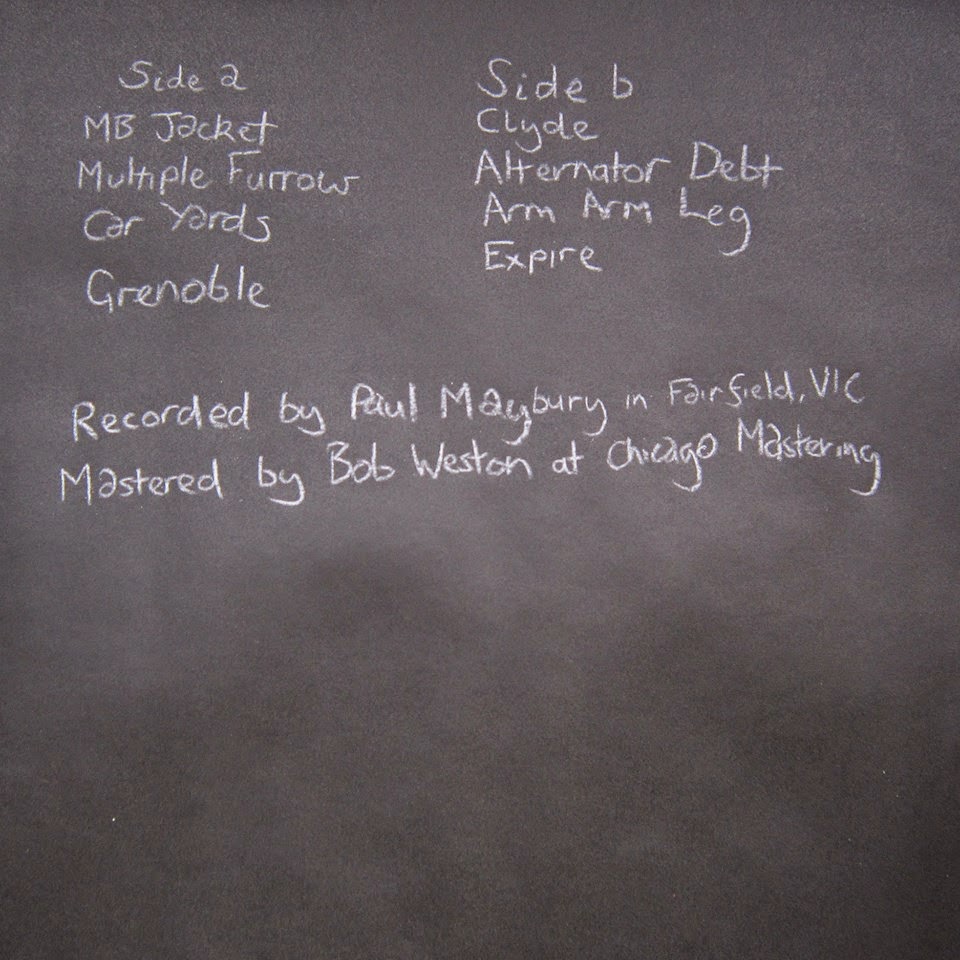 Does Shovels have
any music other than the self-titled album, maybe a song on a compilation or a
demo that I might not know about?
Pete:  Nope, that’s
it!
With the release
of the self-titled album last year does Shovels have any releases in the works
or on the horizon at this point?
Pete:  We’re sending
things back and forth.  Something will
get born soon, I’m sure.
With the
completely insane international postage rate increases that have just kept
going up and up over the last few years, I try and provide our readers with as
many possible options as I can.  Where’s
the best place for our US readers to pick up copies of your music?
Shovels:
Stores/distros such as 1-2-3-4 Go, Florida’s Dying, Goner and Permanent
have taken copies and as Homeless is distributed by Revolver in the US, the
album should be readily available, but it is limited to only 350 copies.
What about our
international and overseas readers?
Shovels:  Homeless is
distributed by Forte in the UK and into Europe, and has great distribution via
Don’t Buy Records in the Netherlands, and X-Mist in Germany always have copies
of Homeless titles, as does Born Bad and La Silence de la Rue in Paris.  Check the “Stockists” tab on the Homelesswebsite for more options, the above list is far from complete.
And where’s the
best place for our interested readers to keep up with the latest news like
upcoming shows and album releases coming at?
Shovels:  Facebook.
Are there any
major goals or plans that Shovels are looking to accomplish in the rest of 2014
or 2015?
Pete:  We’ll get in
another Australian tour late this year, write some new material and then hit
the States in 2015.
Do you all spend a
lot of time out on the road?  Do you all
enjoy being out on tour?  What’s life
like out on the road for Shovels?
Pete:  A friend, who’s
also in a band, once described touring as “waiting around to get drunk
again”.  While this isn’t always the
case, there certainly is a lot of waiting.
Playing shows and meeting other folks making music is about as good as
it gets though.  Mike loves driving.
What, if anything,
do you all have planned as far as touring goes for the rest of the year (2014)?
Mike:  We’ll be
touring Australia in November/December of this year.
Adam:  We’re aiming
for a USA tour in 2015.
Who are some of
your personal favorite bands that you all have had a chance to play with over
the past few years?
Pete:  feedtime,
Gunslingers from France (Interview here) and Pony Bones.
Adam:  Those ones for
sure.  Last year we played with Tyvek and
Blank Realm in Brisbane which was a great show.
Camp A Low Hum in New Zealand earlier this year was wild.  Some of our favourite Aussie bands like Bone,
Bare Grillz and Kangaroo Skull played.
The Clean also played a mind-blowing set after a brutal day of non-stop
rain.
Mike:  Definitely all
of the above, plus Useless Children and Apache Dropout.
In your dreams,
who are you on tour with?
Adam:  Ya Ho Wah 13
and George Brassens.
Pete:  The Raincoats
transported from 1979, The Urinals, Pumice and Milford Graves.
Mike:  Coloured Balls.
Do you have any
funny or interesting stories from live shows or performances that you’d like to
share with our readers here?
Pete:  We’re pretty
much Mötley Crüe. 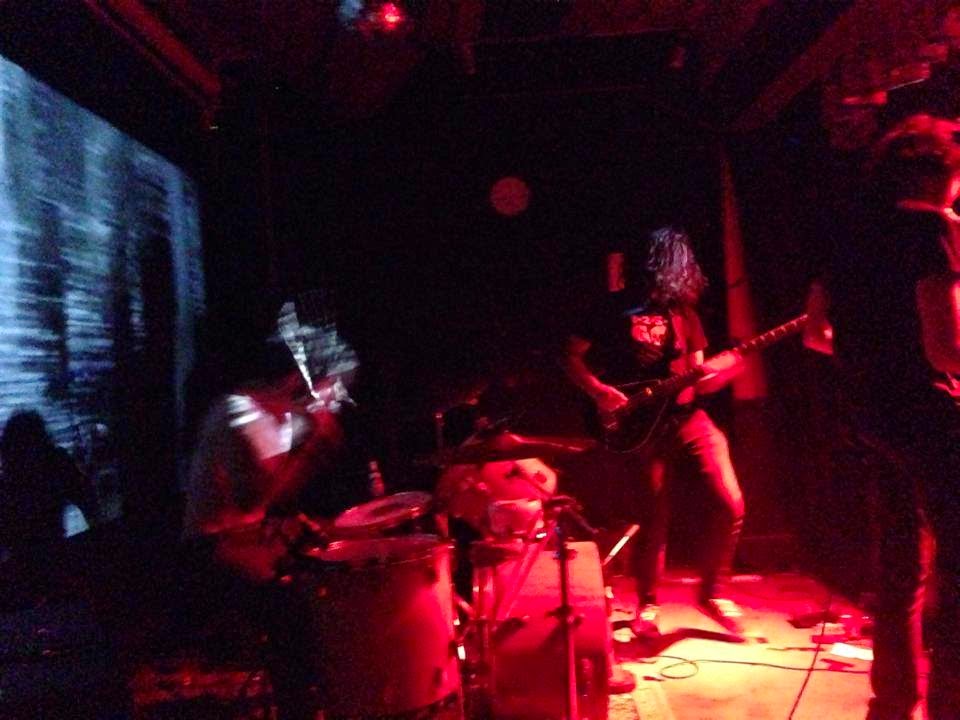 Adam:  A couple of
times we’ve played DIY house shows where we’ve turned up in the afternoon and a
free keg has been provided, and haven’t actually performed until 4am.  Those have been some interesting shows.
Do you all give a
lot of thought to the visual aspects that represent the band to a large extent
like designs for logos, shirts, fliers, posters, covers and that sort of
thing?  Is there any kind of meaning or
message that you’re trying to convey with your artwork?  Do you have anyone that you usually turn to
in your times of need when it comes that sort of thing?  If so, who is that and how did you originally
get hooked up with them?
Adam:  Pete?
Pete:  I do most of
the art for the band.  I wouldn’t say
there’s a meaning or message, art and music should function as an end unto
themselves.  Drawing and making things,
goes hand in hand with making noises for me.
I’d hope my drumming and my drawings are coalescing into a blurry
whole.  So, no.  No message, no meaning.  But that doesn’t mean no content.  I think the imagery suits the noises we make. 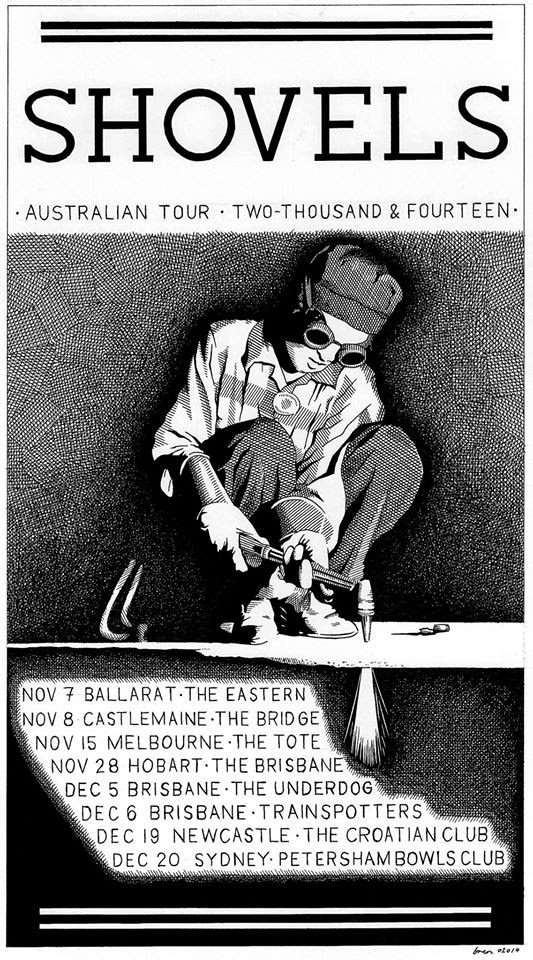 With all of the
various mediums of release that are available to musicians today I’m always
curious why they choose and prefer the methods that they do.  Do you have a preferred medium of release for
your own music?  What about when you’re
listening to and or purchasing music?  If
you do have a preference, can you tell us a little bit about why?
Pete:  I like tapes to
look at.  I like the way they move and
they’re a good size, as well as this: electromagnetism is a fascinating
thing.  Have you seen Joseph Henry’s
early electromagnets? As great an act of visual creation as any artwork I’ve
seen!  Look at this shit:

Do you have a
music collection at all?  If so, can you
tell us a bit about it?
Adam:  Yeah, I own
records.
Pete:  Mine is pretty
fragmented; tapes, records, CDs.  I’m not
really a collector.
Mike:  I have a record
collection, but it’s pretty small in comparison to most.  Some prized records I got for $1: AC/DC Dirty
Deeds Done Dirt Cheap, Warren Zevon Excitable Boy, and Ennio Morricone’s The
Good, The Bad, and The Ugly soundtrack.
I grew up around
my father who really encouraged me to listen to anything that I wanted to when
I was younger.  He would take me out and
pick me up random stuff from the shop and I would hurry home, kick back with a
set of headphones, read the liner notes, stare at the cover art and just let
the whole thing carry me off on this trip.
Having something physical to hold and experience along with the music
always made fro a more complete listening experience for me and in my growing
age it’s become a bit of an obsession to say the least, ha-ha!  Do you have any such connection with
physically released music?
Pete:  Sure.  It’s a ritual hey?  Like grinding your own coffee, or building your
own chairs.
Like it or not it
seems that digital music is here to stay.
While on it’s own it may have provide innocuous, when teamed with the
internet you have something revolutionary on your hands!  Together they’ve exposed people to the literal
world of music that they’re surrounded by, eliminated geographic boundaries
that crippled bands as little as a decade ago and provided the groundwork for
an unparalleled level of communication between bands and their fans.  On the other hand though, while people are
being exposed to a lot of new music they’re not necessarily inclined to pay for
it and a lot of people are beginning to see music as this kind of disposable
experience to be used and then discarded when you’re done with it.  As a musician during the reign of the digital
era, what’s your opinion on digital music and distribution?
Pete:  I’m not sure
that the digital era cares what I think of it!
I try to keep up
with as much good music as I possibly can but there’s not enough time in the day
to keep up with even a percentage of the amazing stuff that’s going on right
now.  Is there anyone from your local
scene or are that I should be listening to?
Pete:  I really like
Mad Nanna and Ghost Gums.  Homeless, the
record label we’re on, puts out some ace shit, Sewers and Cuntz in
particular.  Heaps more than I can
remember, Scrabble, Cured Pink, Dead, Blank Realm, Bone, Exhaustion, Useless
Children, Dead, Tax, Native Cats…
Mike:  I like Legs
from Oakland, as well as Pang, Meg Baird, Violence Creeps, CCR Headcleaner,
Scraper, Cold Beat, Baus, and a bunch more.
What about
nationally and internationally?
Pete:  I’m really
hoping for a chance to see Bill Orcutt.
Mike:  I like the
whole northeast crowd: Pete Nolan, Spectre Folk, Magik Markers, Chris Corsano,
MV+EE, and Ben Chasny/Six Organs.  I also
heard Tashi Dorji recently and really enjoyed his music.
Thanks so much for
doing the interview!  It was awesome
getting to learn so much about the band and I hope that you all had at least a
little bit of fun looking back on everything that you’ve managed to accomplish
as a band.  Before we sign off, is there
anything that I could have possibly missed or that you’d just like to take this
opportunity to talk to me or the readers about?
Pete:  Cheers!
DISCOGRAPHY
(2014)  Shovels –
Shovels – digital, Cassette Tape, 12” – Homeless Records (Smoky Haze 12”
limited to 100 copies, Black Vinyl 12” limited to 350 copies, Cassette Tape
limited to 100 copies)
Interview made by Roman Rathert/2014
© Copyright http://psychedelicbaby.blogspot.com/2014
InterviewRoman RathertShovelsUnderground of the Day Series