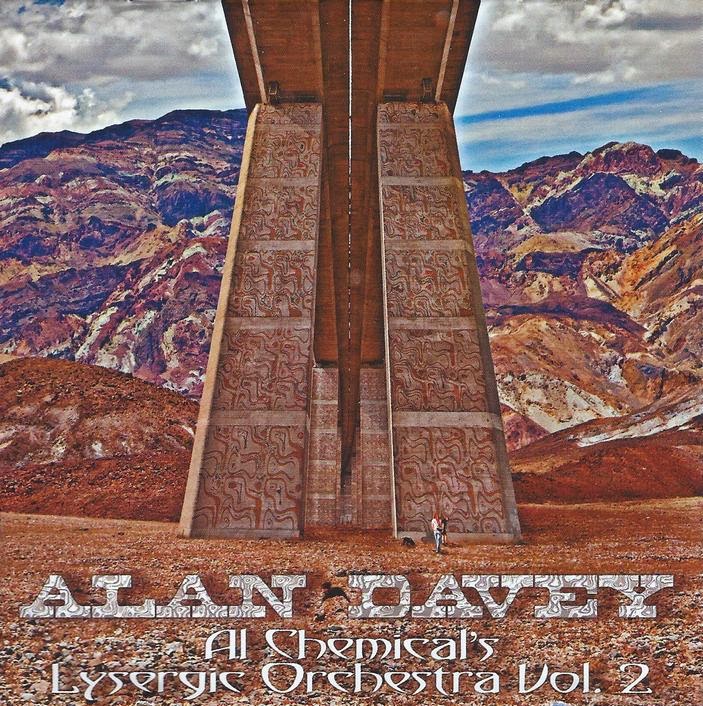 Alan Davey “Al Chemical’s Lysergic Orchestra Vol. 2” (Earthquake, 2013)
The erstwhile Hawkwind/Hawklord/Psychedelic Warlord bassist
survived two stints across a couple of decades in Dave Brock’s concentration
camp/looney bin, contributing to nearly two dozen releases before opting for
greener pastures, thereby keeping his musical integrity intact. Along the way,
Davey also featured in a Middle Eastern-flavoured rock band (Bedouin), a
Motorhead tribute band (Ace of Spades), a Medieval Black Metal (Meads of
Asphodel), and the hard rocking Gunslinger. He even finds time to record a solo
album now and again, and this is his second volume of experimental music
designed especially “for those who like to sit back and relax”. It also looks
(via Davey’s beautiful photographs that grace the booklet) and feels like a
thinly-veiled concept album-cum-travelogue, with most of its ten tracks
namechecking various locales in California’s Death Valley.
In fact,
the album opens with the distinctly Hawkwind-by-way-of-Motorhead speed metal
rush of “Goodbye Death Valley”, as old prospectors (49’ers whom we will meet
again later in the album) chuck it in and give up their desires for easy riches
in the gold mines, heading “Out of this godforsaken waste!” “Hell’s Gate”
conforms more to the “experimental” aspects of this lysergic trip, an
atmospheric instrumental of eerie electronics and ominous bass lines that feeds
into the warped synth swashes of ”Mustard Canyon”, which will certainly appeal
to krautrockers everywhere, particularly fans of the cinematic explorations of
Tangerine Dream and Popul Vuh.
Hawkwind’s
“electronic phase” is present throughout the “relaxing” (!) instrumentals, with
Davey’s stunning synth flourishes effectively capturing the expanse of Death
Valley’s geography. There’s an airy, openness about the album that lifts the
listener above the oppressive claustrophobia hinted at in the lyrics, from the
“saline toxicity” of “Badwater” to the “Ejaculatory tongues of surgent flame”
emanating from Bob Calvert’s poetry in “49’ers,” which is not unlike Terrance
McKenna’s wigged out collaboration with Spacetime Continuum, “Alien Dreamtime”
(Astralwerks, 1993).
I also
enjoyed Davey’s revisiting his Middle Eastern/Bedouin past with the
hallucinatory “Dante’s View”, the banjo-like dance across “Titus Canyon”, and
the Eno-esque ambience of the soothing, meditative closer, “Zabriskie Point”.
This is a very eclectic musical smorgasbord, I’ll give you
that. But Davey’s years of experience with a varied musical palette have served
him well and he puts them to excellent use throughout this rewarding release.
Review made by Jeff Penczak/2014
© Copyright http://psychedelicbaby.blogspot.com/2014
Alan DaveyHawkwindJeff PenczakReviews