Dead Meadow formed in 1998 with Jason Simon on vocals and guitar, Steve Kille on bass, and Mark Laughlin on drums. They began to combine 70s hard rock and 60s psychedelic rock with far out and sometimes mystically minded lyrical themes occasionally even hinting at the obscure genius H. P. Lovecraft and other far out writers of the bizarre and weird.

I grew up outside of Washington DC. I don’t have any older siblings and my folks didn’t listen to much music so it was a long slow process of slowly discovering cool bands and music in general. I think it in the end it was more rewarding that way. Even bands like the Beatles, Zeppelin, and the Stones were so completely new when I finally came across them, it was like whole undiscovered worlds were opening before me. Iron Maiden rocked my world for quite a few years (and still does for that matter). 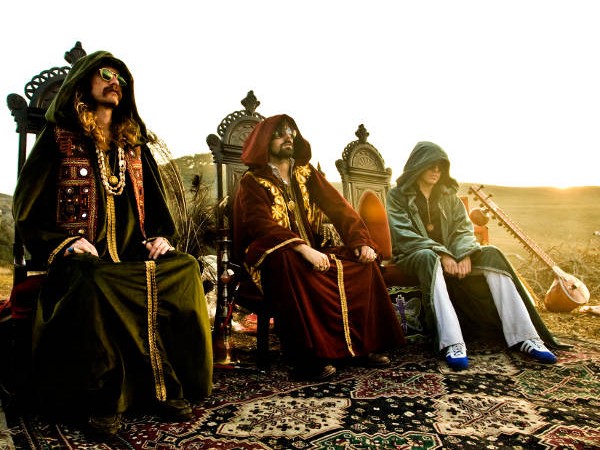 What was the scene in your town?

DC had a pretty amazing punk scene. Fugazi and Dischord records. Amazing bands like Rites of Spring, the Nation of Ulysses, Circus Lupus. It blew my mind when I got into all of that in high school. Aside from the quality of the music, it really drove him the fact that if you want to do a band, all it takes is for you to get it together and believe in it. Start putting out tapes and seven inches and do it on your own…just make it happen! The whole D.I.Y. attitude of the punk really instilled that.

Were you in any bands before Dead Meadow? I know you were in a bands like The Impossible Five and Colour. Did you release anything?

I had various high school bands. Steve Kille (Dead Meadow bass player) started playing together in 1995 in a band called Impossible Five. It was way more punk with a lot of sixties type soundtrack elements. We had some seven inches and a record. Colour was a short lived project, more a stepping stone to Dead Meadow as we moved away from the aggressive punk side of things to something more psychedelic. 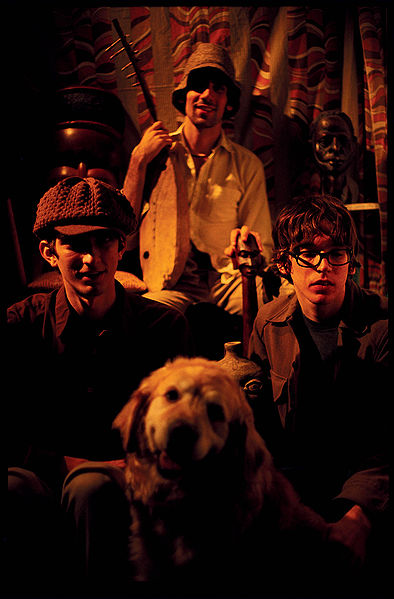 What can you tell me about the background of your music?

Dead Meadow was and is our attempt to capture the grandeur and expansiveness of classic bands like Zeppelin, Sabbath, Hendrix, the Beatles 13th Floor Elevators etc. (bands the really opened our minds when we were young) filtered through everything we’ve lived through and the time we live in. We were always conscious of the fact that we wanted to be retro minded but never sound like a cover band if it ya know what I mean.

“We felt we had a mission to get people to chill out, relax and let the music paint pictures on the canvas of their minds”

Would you share a few words about your albums. Your debut was released in 2000.

It’s all recorded live in my parents basement. It was a real cool time. Nobody in DC was doing any thing so slow and stoned out so there was a real sense of purpose and excitement. We felt we had a mission to get people to chill out, relax and let the music paint pictures on the canvas of their minds, if ya know what I mean.

Howls From the Hills and Got Live If You Want It followed.

Howls From the Hills we recorded on a farm in eastern Indiana. It’s definitely a much darker album, maybe the darkest we’ve done. I really dig it.

Got Live If You Want It is a weird one. Basically we were touring with the Brian Jonestown Massacre a lot back then and after a show in New Jersey Anton grabbed a recording the sound guy made. A few months later he called up, played a few songs over the phone, and asked if he could put it out on Bomp. Bomp is a rad label and we were stoked. We thought why not? Got Live If You Want It is basically a sanctioned bootleg. All in all, it’s a rad artifact and I’m stoked it exists.

Shivering King and Others is the first album on Metador label. Your first two were on Tolotta label. How did you get in contact with Metador?

They found us. I think we were brought to their attention by a cool psych band from Philly called Bardo Pond. They were on Matador and we had played with them in Baltimore.

This release is a bit different. Do you agree?

I guess it is different. I never think of any of them as being that different, just a continuation or elaboration of a certain aspect of the band. It’s never a conscious attempt really, more of just how we are all feeling at the time. This is the first record that we tracked on our own so there was lots time for experimenting. We did think it would be cool to utilize the studio more in terms of overdubbing and layering as there is very little of that on the first two. It was a record that took a bit of time for some people to grasp I think. It’s definitely a good record to trip out to. I particularly like “Golden Cloud” on that record.

Feathers is another great release.

Feathers was extremely stressful to make. It definitely marks the height of drug use within the band. Unbeknown to us at the time of hiring him, the producer was also extremely strung out. We would often finish a take or two and find him out in the waiting room of the studio nodding out and drooling on himself. We did the basic tracks in a studio up in NYC and then took it back to DC to do overdubs and vocals. I really liked playing with Cory on that record. He was the other guitarist and an old friend. Dead Meadow as a four piece fell apart on the road though. Mostly due to interpersonal squabbles and drug use. I am really proud of that record and have grown more fond of it as time passes.

Old Growth followed. Your latest one is Three Kings.

With both of these records there was attempt to capture a more live ‘rocking’ sound. Since the beginning of the band we have had people coming up after the shows saying “Man, you’re records don’t do you justice at all…it’s so much better live.” That was the initial impetus for recording the show that became the majority of Three Kings. We had been on tour for three months straight and the band was extremely tight. After we had recorded it, we discovered that the concert had also been filmed with multiple cameras. The project just kept expanding from there until we had a full movie and four new songs as well. This is the last release to have Stephen Mcarty on it. After the Three Kings tour he decided that his time in the band was done. I am really happy that Three Kings captured what an amazing drummer he is.

You have your own solo album as well.

Yes, last year I released my first ‘solo’ album. It’s primarily acoustic based. I am a huge fan of people like Leonard Cohen, Townes Van Zandt, Bert Jansch, Bob Dylan, Roy Harper etc. It blows my mind when a performer can get such a strong complete vibe going on with nothing but his voice and an acoustic guitar. I really dig the challenge of it and how different it is than Dead Meadow. Sometimes a crushing song done with nothing but guitar and voice can be so much heavier than any amount of volume, distortion, or drums. I also just love to play and write songs and am stoked to have another outlet in which to do so. With this solo project it’s so easy to tour and to play anywhere. Sometimes I will play solo and but often I will play with other musicians for it. It’s cool cause the line up is always changing. It keeps it interesting.

Sometimes they forget our peanut M and M’s. It’s real messed up. Just kidding. It’s always an adventure. We can have an amazing show and great time one day and feel on top of the world and then the next day, next town, everything goes wrong. But it’s all good…can’t have no highs without the lows….

Where will you go touring? Couple of years ago you were playing in Ljubljana, Slovenia. It was a great show.

Of course I remember playing Slovenia. I would love to be back there. That is the furthest east that Dead Meadow has traveled. We will def make it back soon. I will push for it to happen the next time we cross the Atlantic.

What are some other future plans for you?

Right now Dead Meadow is recording a new record. We are playing with Mark Laughlin on drums. He’s the drummer from the first two Dead Meadow records. It’s coming out real cool. A bit more mellow and real psychedelically tripped out. 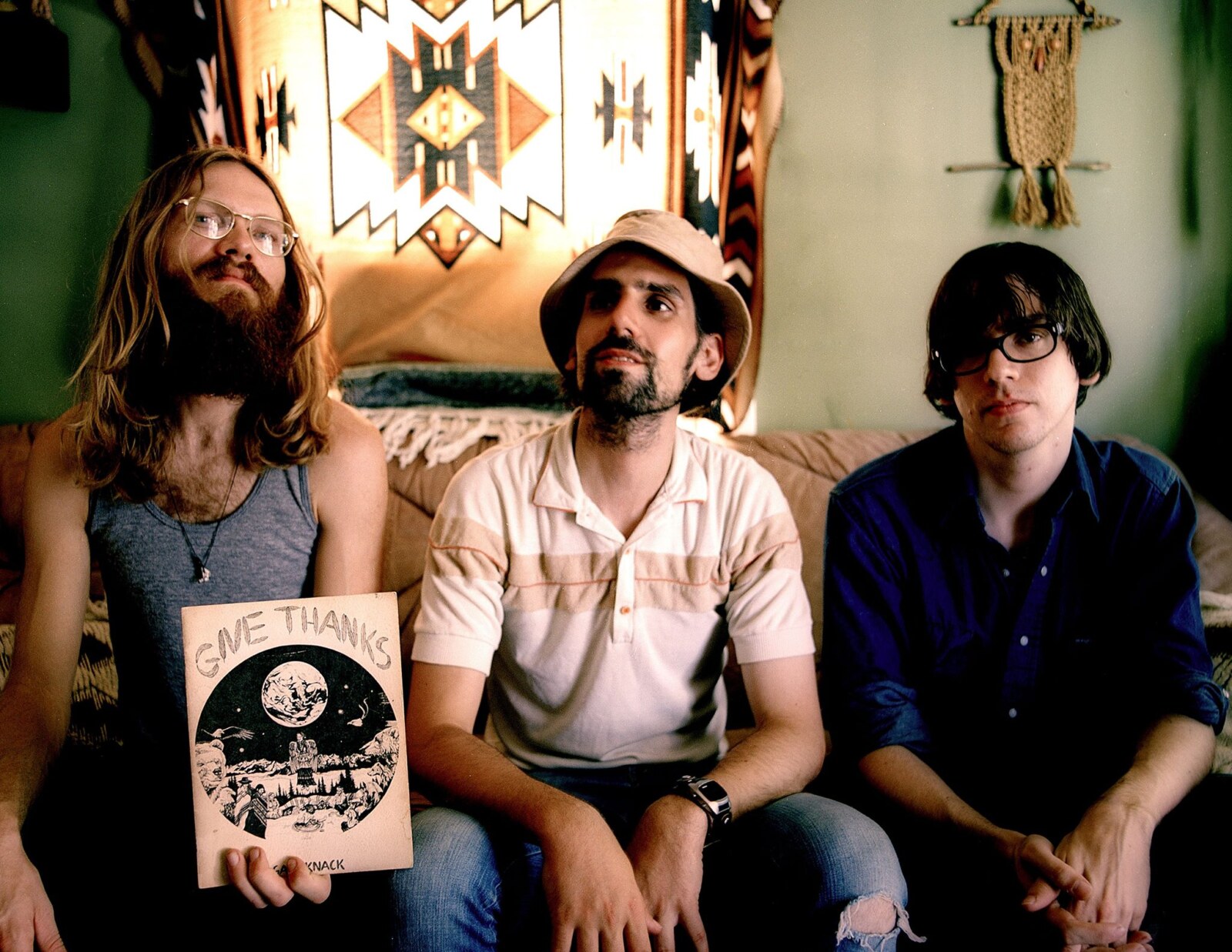 How do you see the psychedelic scene these days?

I think it’s rad that it has grown and there is so much more interest in it. When we started we would never even play with other psychedelically minded bands. It seemed there just weren’t any. Now it seems that in most towns and cities there are always local kids and bands doing real tripped out stuff. That is a cool thing.