Formation of the band.
It was in late 2003. Me (Emil – bass) and Sebastian (drums) were looking for a guy who can play guitar in the style we preferred at that time. Sebastian saw an advert in the music shop. It was Robert (guitar) who was looking for a guy to his band. He came to our rehearsal and he stayed. It was really impressive rehearsal. We made 4 tracks together on our first meeting! After some time we played our first live gig and we decided that we should play together. And that was the beginning of Same Road. Why that name? We tried to made a vocals on our early tracks, one of which has the lyrics about driving the same road:) We just picked that for our name…
What are some of your influences?
In the beginning our influences was totally different that now. The band that connect our three to create Same Road was the polish band Ewa Braun. At that time they were our musical gods (unfortunately they split few years before we formed), specially their late albums (“Sea Sea”, “Electromovement” and “Stereo”). The musical style they played was called post-punk/noise/post-rock but I personally think they were above any label. In time our influences expanded to many musical genres (we always listened to a lot of music). But yes, we love 60’s/70’s music. Specially bands like German Oak, Baby Grandmothers, Can, Guru Guru and many more. In these times I must add a lot Japanese psychedelic bands. These guys are crazy! And of course Bardo Pond which is one of my personal favourites.
There are already four albums available. 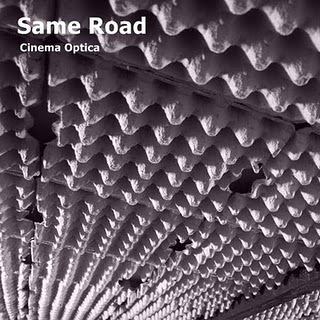 Cinema Optica (2004)
We started to play in May 2003. At the end of that year we recorded our first tracks in our rehearsal room, on PC. We called it “Woodr”. Some of these tracks were quite nice, but unfortunally the equpment we’ve had and recording conditions were so poor that it just couldn’t sound right. Anyway we made few copies and even a cover and shared it with some of our friends.
“Cinema Optica” is our second recording. We used a long, empty room that time and we’d been playing live. We had few microphones and a mixer and it was recorded on tape (!!!). Very specific sound of this place gave us natural echo/delay effect. Recorded in 2 days in April 2004. Right-channel guitar was added day after. Many years has passed but we still like this record.
Muzyka do mycia okien (2009)
In the beginning of 2005 we decided to split up. Everyone of us had a different plans and our ways took us to a totally strange places around the Europe. But the idea of making music together never left us. In the middle of 2008 after few phone calls we met again. And that was something! We started to play again on new equipment. “Muzyka do mycia okien” is a result of few months of rehearsing. All these tracks came from jamming together. We recorded this album in CK 105, which is the most professional studio in our city (Koszalin). We did this in 2 days, all recorded live. We have this CD professionally released in limited edition. 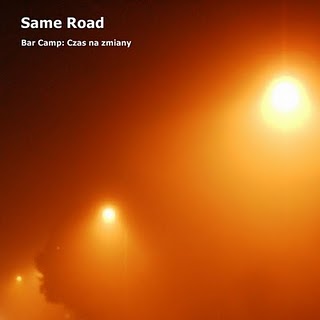 Bar Camp: Czas na zmiany (15.05.2010)
“Galeria SCENA” is an artistic branch of CK 105. They basically make photo, paintings, sculptures, videos galleries and stuff like that with the cooperation with the local students of Technical University. It’s the third time we’ve been playing for them. This time was the night of performances. We didn’t know anything about the nature of that. They called it “Bar Camp: Czas na zmiany” (“Time for changes”). As I said we knew the place before, which was the basement of city’s library, and we liked the acoustic of this place. And we recorded this gig. Few days before we bought a new microphone and it’s all recorded by it. Tracks 1-4 & 10 are improv/jams. Track 2 is for performance of Andrzej Ciesielski and track 3 for performance of Robert Knuth (who is actually shouting in this track). Tracks 5,6 & 9 came from “Muzyka do mycia okien” and we play these live very often. Track 7 is one of our new tracks and 8 is one of our first tune ever. The last one is a soundtrack to a movie we’ve all been watching at the end of this night.
So as I said: 100% live, in one microphone, 15.05.2010 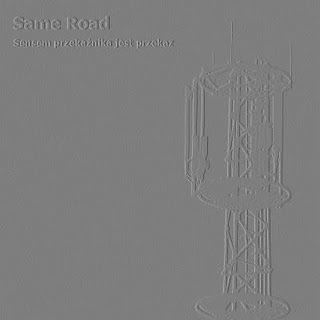 Sensem przekaźnika jest przekaz (2011)
It’s space, kraut, fuzz, wah, psychedelic, stoner, noise. Recorded live in 2 microphones in our rehearsal room. No editing. Engineering by ourselves. Jams from September/October 2010. This is how we really sound. http://sameroadnoise.blogspot.com/
We have no contract so they’re not out:) We record our music and if we like it we put it on our blog. We have our own equipment now so we can record our music when we want, how long we want and in the way we want. Our last album is recorded in just two microphones (all live) and that is the way we should always do.
Do you often play live?
We play live very rare. There is no scene in Poland in this kind of music. We live in medium-size city and there are just few pubs that we can play and we played there few times. We do everything ourselves which is sometimes very hard. We don’t know many people who are interested in our music and who can help us. I think it’s all about money and Same Road is not a brand which can bring many people to a concert. But i don’t know really why is that not working properly in these country. There are many worse bands in Europe that are released in quite known labels and have long tours. We still hope that something will change in the future, we send our records to many different people, but not many replies…Anyway everything what matters is music and, thanks to internet, we can always put it on our own blog.
What is your opinion about psychedelic rock scene these days?
I think it’s growing rapidly. I’m really concerned about quality of all these bands. Right now they’re mostly great but there are still more and more. I mean it’s great that you have so many bands to choose but I’m afraid that sooner or later it’ll all end. Every genre that becomes popular after some time goes down and never rises so high again. Then only few bands will remain. And psychedelic scene is very close to reach its popularity peak.
Love the improvisations!
Thanks, I’m glad you enjoy it! The record method is the key. As I said before – just two microphones. The sound of our late record is so raw (I would say natural) because of that. You can hear natural flow of this music, it’s recorded live and sometimes we made errors and you can hear that. But it’s not the point to have all your music recorded so perfectly. All todays rock productions are made for weeks or months! I don’t understand that. That’s why rock is dead, because that is not rock 🙂 Bands spent so much time in studios , they have perfect sound , all in time, but everything you can hear are simple notes straight from the book. And solos copied in every track. Don’t even mention the vocals…
Our tracks are more jams than songs. We play them every time a little different than last time. Improvisation play a big role in our music
How about some future plans for the band?
Right now we made ourselves a little break. We played every week since 2008 and we recorded a lot of material. We need new strength and fresh approach. Still we are able and ready to play live anytime, cause that is not a problem for a music with so much room for improvisations… and we like to make a totally new tracks when we play live. On our album “Bar Camp”, which is recorded live on one of our gigs, you can hear what I mean. There are few improvisations. You can read about it on our blog.
Thank you very much for your time and effort. Do you have anything else to say about the band or yourself, that I didn’t ask?
I hope there are people that understand what we wanted to say through our music. It’s not easy to do what we do. Don’t be fooled by false prophets! Calm down and relax 🙂
– Klemen Breznikar