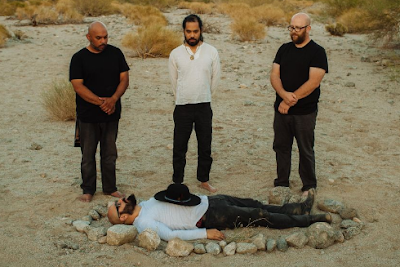 It’s funky and psychedelic in best possible way. Here Lies Man self titled album is one of the most refreshing releases from 2017. I was absolutely amazed when I heard their album. Here’s our interview with Marcos Garcia. He is well known for being part of Antibalas, the Afrobeat collective. Here Lies Man released an album on Riding Easy Records and are currently in the studio working on their next.

You only recently released an album and it got my attention because the sound of it was so similar to what groups from Zambia did back in the 1970s. I’m a huge fan of so-called Zam rock and wrote several articles about it, including an interview with WITCH member Jagari (interview here)
I enjoyed reading the interview. Thank you for sending!
Let’s start this interview with what are some of your influences?
Fela Kuti, Orchestre Poly-Rythmo de Contonou, The Funks, Black Sabbath, Pink Floyd
Who’s in Here Lies Man and what do you all play?
The live band consists of:
Marcos Garcia – guitar, vocals
Geoff Mann – drums
JP Maramba – bass
Richard Panta – congas
Have you all made any changes to the lineup since you started or is this the original lineup?
I recorded the first album with Geoff Mann soon after I moved to LA. I’d been wanting to start this new project for many years.
We’d played together in Antibalas over many years but, we were living on opposite coasts and years had passed since we had played together. One of the first sessions I had upon relocating was with him, and pretty shortly afterwards, we recorded the album. He immediately understood what I wanted to achieve and provided the rhythms that each song was asking for.
I asked Richard Panta, a long time friend, and founder of LA’s Very Be Careful, to play congas on the album. It wasn’t until a couple of months later that we were fortunate to find JP Maramba to play bass.
It’s really great that people are starting to appreciate sounds from Africa.
Well, thankfully that’s been going on for a while. Antibalas has been together for almost twenty years.
Zam rock is not only known by collectors, but accepted and appreciated also by a wider audience. Musicians like yourself are spreading the message. Today, Zam rock has been reissued, documentaries are in the making and musicians got influenced by it…
I’m very grateful for that. African music and that of the Diaspora is an endless source of inspiration. Honestly, I wasn’t really familiar with Zam Rock until the last seven years or so.
Bands are often trying to assimilate the sound from the past and they usually fail, but you actually have something special. It’s like listening to Zam rock in modern production. I was very impressed. Quite unique. How did you manage to get the sound and what gear are you using?
It’s interesting to hear the comparison to Zam Rock because for me it’s essentially afrobeat with less highlife and more blues presented in a heavy psych aesthetic. It’s a recontextualization of a music that I’m intimately familiar with.
When I relocated to LA from NY, I shipped out all of my gear. Much of which I had collected over the span of several years in order to launch this project. 70’s tube amps, organs, guitars, etc.
Everything we recorded was intentional, albeit, with a few happy accidents along the way. Sonically, we tried to record as much as we could to tape and then add a few digital overdubs. The goal was to achieve a raw, and honest recording that had character. Jeremy Page, the mixing engineer, did a great job of bringing a sense of immediacy the recordings and was really able to highlight the vibe I’d wanted to achieve.
Can you explain the whole concept behind Here Lies Man a bit more in details?
There is power and catharsis in being able to look into, and engage with the darkness.
When and how did you all originally meet?
NYC, Antibalas, 2003
When did you decide that you wanted to start writing and performing your own music?
My father was a Latin record producer from the 1960’s-80’s and my mother was a DJ on Spanish language radio in NYC in the 1960’s and early 70’s. I was born into this.
I started writing my own music when I was around 12 years old shortly after my father died. I suppose it was my therapy.
What does the name “Here Lies Man” mean or refer to in the context of the band name? Who came up with and how did you go about choosing it?
The name arrived when I was working on the last song of the album, “Here Lies Man”. As soon as the words left my mouth it was clear that it captured the essence of what I was feeling. The meaning is whatever it evokes in the listener. To me it refers to the struggle of the ego with death and the angst this conflict produces. The feeling is what most people around the world are familiar with, how to cope with civilization in its current state and find meaning.
What’s the songwriting process with Here Lies Man like?
I write the music and Geoff and I arrange it, and sometimes tweak it a bit.
For this band I write on the guitar at home, and record the parts on my phone. Then I send them to Geoff and we get together to play the songs and arrange them. It’s been a pretty efficient method and we work very easily together. 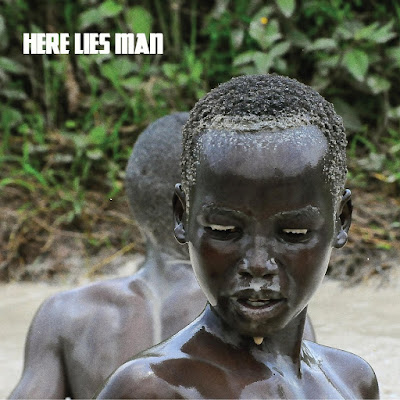 Can you share some further details how your album was recorded?
I was subletting studio space from a friend in LA when I moved. The space used to be an old doctor’s office or something like that. The idea was to capture a proof of concept and not worry too much about making it sound pretty, but, rather to capture the rawness and newness of the material. Anything else I tell you would be sharing trade secrets.
What are some future plans?
We’d like to be on tour in the late fall.
We’re almost finished recording the second album, which builds upon and expands the concept(s) further.
Let’s end this interview with some of your favourite albums. Have you found something new lately you would like to recommend to our readers?
Fela Kuti – V. I. P.
Fela Kuti – Go Slow
The Funkees – Breakthrough
The Funkees – Acid Rock
Orchestre Poly-Rythmo de Cotonou – Malin Kpon O
Orchestre Poly-Rythmo de Cotonou – Mi Ni Non Kpo
Geraldo Pino & The Heartbeats – Heavy Heavy Heavy
Ngozi Family – Night of Fear
Celia Cruz – Sopa en Botella
Arsenio Rodriguez – Jaguey
What can you tell us about the cover artwork?
The label found the work of the photographer, Edward Echwalu. The image was so striking and eerie that as an album cover it forces you to wonder what the music must sound like.