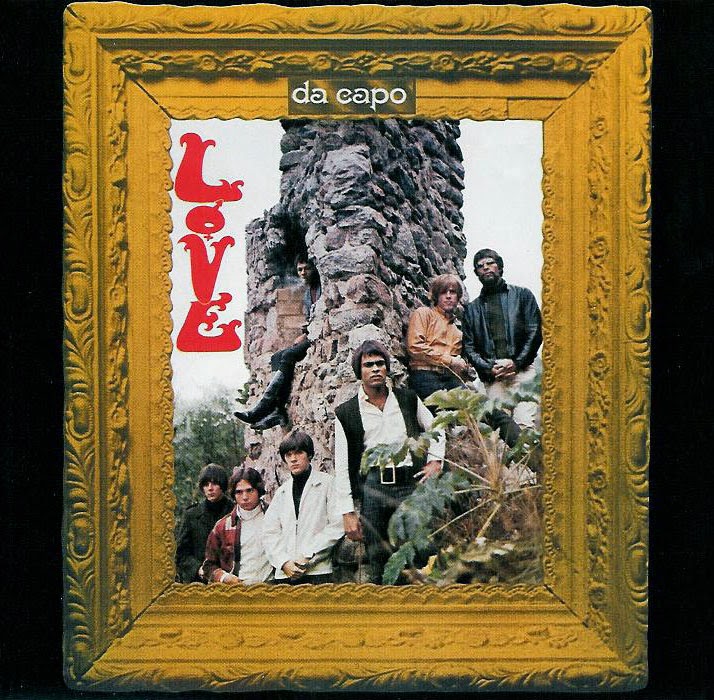 Love – Da Capo (Music On Vinyl, 1966/2014)
Post-Byrds and pre-Doors, the toast of LA’s hipster scene
was undoubtedly Love. With the songwriting power of main lead vocalist Arthur
Lee and rhythm guitarist Bryan Maclean, Love created a fine mesh of tough,
surly jangle-spike moves and, contrastingly, more than a few ultra-moody
ballads to balance things out. Those qualities would run all the way through
their incredible eponymous 1966 debut.
As they introduced a few new twists into their already heavy
arsenal (losing and gaining some personnel along the way), the group were
augmented by the sound of flutes, harpsichord and an the ongoing series of
intricate acoustic guitar flourishes being played out courtesy of Johnny
Echols, Lee and Maclean, the group now harnessing what could be claimed as the
very beginnings of baroque’n’roll exotica.
This in turn formed the basis for many of the tracks you
hear on this, their second, highly experimental jazz-inspired opus, Da Capo. It
proved to be a truly great, if rather unusual move, yet one that all the time
pointed forward to a more adventurous spirit, and sound that, in a relatively
short time, would be heard much more frequently in a rock style setting. The
exceptional arrangements we hear on ‘Orange Skies’ and ‘She Comes In Colors’
are perhaps the most successful realisations of the group’s newly-adopted
emphasis and choice of direction. The album also contained two of their most
celebrated, diamond hard punk style offerings in ‘Stephanie Knows Who’, and the
runaway juggernaut-style beat-blast of ‘7 & 7 Is’; an amazing feat which –
the 50 odd takes it took to get the astonishing drumming right or otherwise –
also served them well on the US Billboard singles chart. Don’t know about you
but every time I hear this I always wanna follow it up by playing the great
original 7″ flipside, ‘No. 14’, but of course it wasn’t ever present on
the original Da Capo, and so neither is it present on this newly issued set.
The overall sonic punch and super-kinetic energy created on ‘7 & 7 Is’,
however, remains nothing short of miraculous!
And then there’s the side-long ‘Revelation’ to consider.
This radical, one-off,
dangerously experimental excursion never fails to surprise
and amaze. It is still capable of arousing a high degree of controversy among
many listeners too, even if some detractors remain wholly indifferent to its
multi-faceted charms. Well, whichever way you look at it, ‘Revelation’ is a
loose, thrusting, adrenaline-driven jam out whose devil-may-care punk spirit
lies at its heart, yet audaciously it expounds on the similarly-extended nature
(and then some …) that the ‘Stones already laid down on their mammoth ‘Goin’
Home’ cut (Aftermath)  –  undoubtedly a major source of inspiration.
With its almost continuous momentum – despite a few naturally occurring ebbs
and flows –  ‘Revelation’ affords the
space and allows the chance for everyone in the group to shine a little;
including guitars, drums, wind and, not least, Lee’s double-whammy vocal and
bracing harmonica outbursts.
Released at the tail end of ’66 Da Capo would prove a
pivotal piece of modern rock innovation, providing a strong guiding light for
many of the important things to come; in particular the freeform patterns of
such as ‘Revelation’ and its influence upon some of the more outrageous work by
Syd Barrett’s Pink Floyd in London, and others too who were then seeking to
push all rock music boundaries farther out than ever!
Listen then, with heart, mind and soul as the
heart-stirringly melodic content of such as ‘The Castle’, and ‘Que Vida’ washes
into you; their potent lyrical and musical dexterity will have you in
paroxysims of delight. The subtle nuances of Lee’s tricky word manoeuvres, and
the patterns of Echols’ finely honed electric lines, seemingly complex can, at
times, appear deceptively simple. Feed in the quizzicality of Ken Forssi and
Alban “Snoopy” Pfisterer’s looping bass and drums groove, and the
culture-crossing episodes emphasised by Tjay Cantrelli’s woodwind and
keyboard-led passages, and there’s no denying that Love’s Da Capo has, in
abundance, the kind of inherent musical magic few groups could ever come close
to possessing.
Like many tend to do nowadays – and with the advantage of
the instant click-a-button hindsight we have it’s so much easier – I’d say it’s
pretty pointless for people to always be making comparisons with Da Capo’s far
more revered follow-up, just accepting the “oh but it’s not as good as ‘Forever
Changes” mentality that, especially, many industry insiders would have you
believe. I get tired and irked at that type of lazy criticism, genuinely
feeling that Da Capo is every bit as innovative, clever, insightful,
deliciously dangerous and experimental (perhaps even more so … ) especially
as it was only the second LP by what (for the time anyway) was still a
relatively new group. Perhaps I’m preaching to the converted, but I still feel
the need to express the opinion that Da Capo is a singular total tour de force
in the long-play world, and a full-blown trip that can easily stand its own
ground in whichever and whoever’s company anyone cares, or indeed dares to
place it.
Review made by Lenny Helsing/2014
© Copyright http://psychedelicbaby.blogspot.com/2014
Lenny HelsingLoveReviews