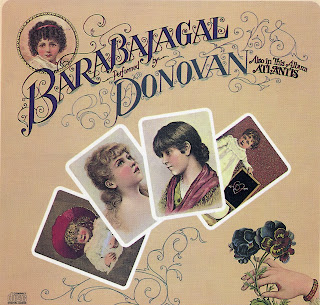 Donovan “Barabajagal” (Music On Vinyl, 1969/2013)
After a huge success with 1968 album “The
Hurdy Gurdy Man” and tour across the USA, Donovan found a lot of inspiration to
write and record his 1969 masterpiece “Barabajagal”. Donovan continued his
pervious tradition of making progress in his music and attracting famous
session musicians. On this album he was supported with Jeff Beck Group with Ron
Wood, Rod Steward, John Paul Jones (that year he became a part of Led Zeppelin)
and many others. That’s probably the reason why this album sounds a little bit
divided into good songs (recorded with JBG) and those not so good. It`s a mix
bag of styles and trips that he had at the time. Album is a mix of hard rock
psychedelic and his traditional folk sound. Original LP was released with ten
songs:
SIDE A
1.
“Barabajagal (Love Is Hot)” – 3:20
2.
“Superlungs (My Supergirl)” – 2:39
3.
“Where Is She?” – 2:46
4.
“Happiness Runs” – 3:25
5.
“I Love My Shirt” – 3:19
SIDE B
1.
“The Love Song” – 3:14
2.
“To Susan on the West Coast Waiting” – 3:12
3.
“Atlantis” – 4:58
4.
“Trudi” – 2:23
5.
“Pamela Jo” – 4:24
Singles “Goo Goo Barabajagal (Love Is
Hot)” / “Trudi” was released as a single in June 1969 in the UK
and in August 1969 in the United States. Second single “Atlantis” with “To
Susan on the West Coast Waiting” made a huge success in the USA, what
resulted with another big tour.
Donovan had contractual dispute between Pye
Records and Epic Records from 1966, so practically all of his albums from that
period had some release delay in UK comparing to the USA releases.
Album opens with groovy “Barabajagal”, with
great musical background supported with Donovan`s nice singing, that made
impressions as the album will be more psychedelic than his earlier works. The
same story is for second song “Superlungs My Supergirl”. Next two songs “Where
is she” and “Happiness Runs” sound more like classic Donovan in all of his folk
style. “I love my shirt” is like a children`s song. Really hard to understand
what he wanted to achieve with putting it on this album together with “The love
song”. “To Susan on the West Coast Waiting” is a song that gained a lot of
popularity in USA, as its about Vietnam war, the topic that was very popular
during the 60s. This song was released as the B side of the single “Atlantis”,
that is the next song. Song about ancient civilization that doesn’t exist
anymore became a sort of a hymn of the hippie movement. Next “Trudi” is a
rewrite of “Lay of the Last Tinker” which appeared on “A Gift
From a Flower to a Garden”. Album ends with “Pamela Jo” a Beatles style
song…well it won`t be a pity if he excluded it from the album, but OK.
General impression is that as most of his
albums – it has great moments with fantastic songs with some unclear moments,
but that`s all the part of his creativity as the legend.
Review made by Andrija Babovic/2013
© Copyright
http://psychedelicbaby.blogspot.com/2013