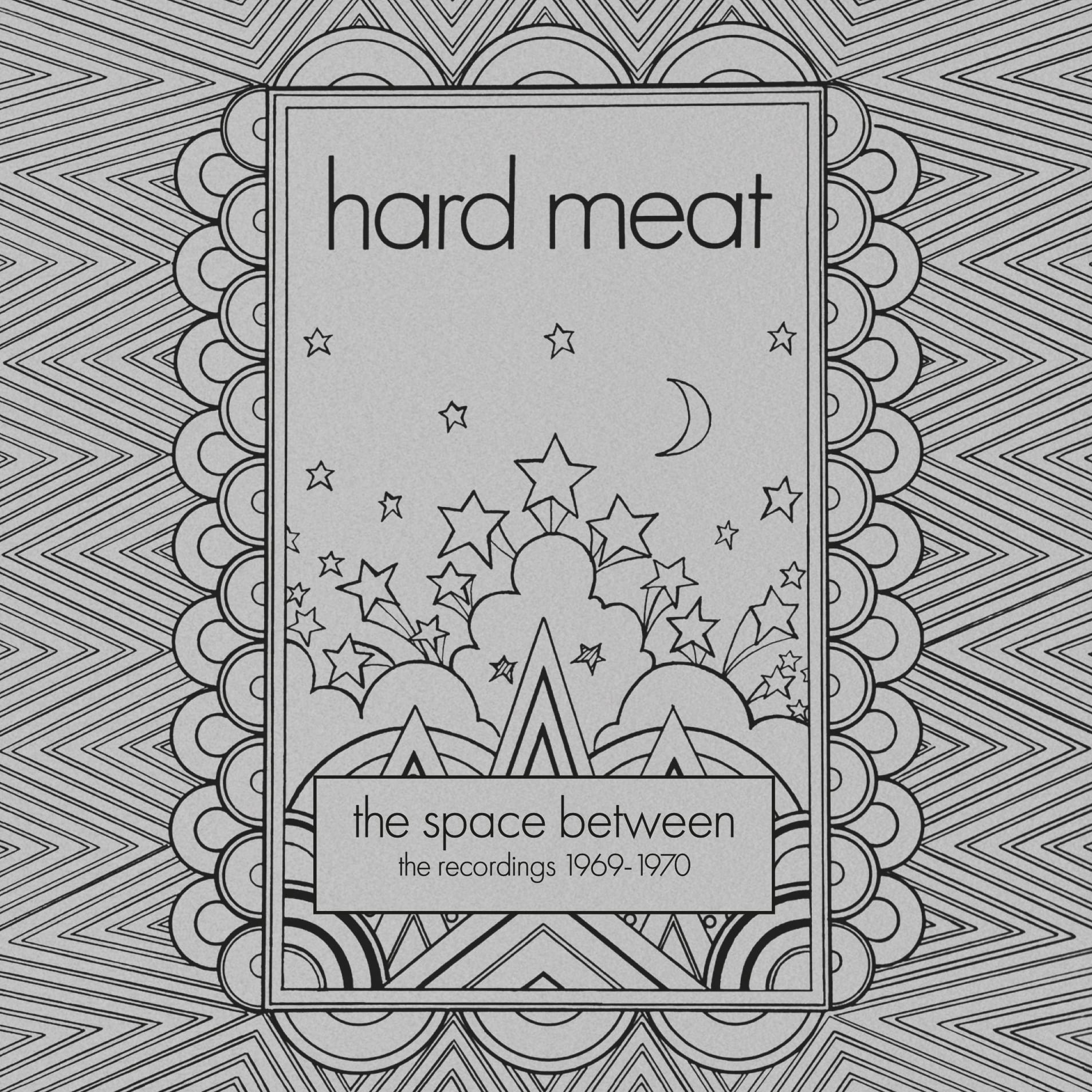 Disc one contains the seven tracks comprising the band’s 1970 LP, six band originals credited to all three members as well as a cover of Bob Dylan’s ‘Most Likely You’ll Go Your Way And I’ll Go Mine’. Two of the seven tunes were re-recordings from the 1969 Island sessions, a heavier take on the Dylan cover and the band original ‘Run Shaker Run’ stretched from four and a half minutes to a ten minute plus magnum opus. The album opener ‘Through a Window’ is a rocker that typifies Hard Meat’s ability to blend acoustic guitar interludes with electric guitar driven tunes, certainly not the norm in 1970. This melodic number features an acoustic intro which gives way to wah wah driven electric guitar and includes smooth tempo changes, a Hard Meat trademark. In a reversal of Led Zeppelin’s ‘Houses Of The Holy’ Hard Meat’s second album would bear the name of this, the first track to greet listener’s ears from the UK trio. ‘Yesterday, Today, Tomorrow’ is a wonderful mixture of psychedelic guitars and melodic, balladish vocals, reminiscent of ‘Legend Of A Mind’ by The Moody Blues, with its restrained wah wah laden solo, once more a pleasant mixture of acoustic and electric and again featuring adept tempo changes. The tune later appeared as the b-side to the group’s second single. The box set’s title track has a heavy wah wah driven lead line from Mick Dolan and thundering bass by brother Steve, the former’s second solo driving the tune home. ‘Time Shows No Face’ is a gentle track with Mick Dolan’s relaxed, chiming acoustic guitar and beautiful vocals joined by Steve Dolan’s bounding bass and piano by Mighty Baby’s Ian Whiteman, with the latter adding a gorgeous flute interlude. The ten minute plus take on ‘Run Shaker Life’ is a hot rocker, showcasing Mick Dolan’s guitar and the racing tempo set by the rhythm section of Steve Dolan and Mick Carless. The band is in fine power trio form with Mick Dolan’s wah wah aided solos soaring as the sound builds to near crescendo level on the tune adapted from Richie Haven’s take on an 18th century Shaker religious hymn first found on his 1967 LP ‘Something Else Again’. ‘Universal Joint’ is a gentle tune focusing on Mick Dolan’s acoustic guitar and Carless’ drum and percussion contributions. The album closes with a revved up cover of Bob Dylan’s ‘Most Likely You Go Your Own Way, I’ll Go Mine’. Mick Dolan’s swirling wah wah aided lead guitar line and heavily echoed vocals are complemented by Bruce Howard’s piano, Steve Dolan’s throbbing bass and Mick Carless riding his hi hats as the tune and album comes to a close.

Disc two comprises Hard Meat’s second 1970 album ‘Through a Window’, the band moving in a gentler, more acoustic direction compared to its predecessor. ‘On The Road’ is a hot rocker, showcasing Mick Dolan’s wah wah guitar, tasty drum rolls by Mick Carless and harmony vocals from the Dolan brothers. ‘New Day’ features an acoustic guitar intro by Mick Dolan accompanied by flute accents, Dolan’s solo complemented by Steve Dolan’s bobbing bass and Carless’ congas giving the song a folk psych feel. ‘Freewheel’ is a gentle, acoustic guitar driven instrumental. ‘Smile As You Go Under’ blends acoustic and electric guitars, Mick Dolan contributing two solos, the psychedelic rocker closing with backwards guitars and feedback. A seven minute cover of Graham Bond’s ‘I Want You’ is a blues rocker with an insistent riff and a wonderfully clean lead guitar line. Dolan contributes two solos, wah wah aided, while the rhythm section jams with Steve Dolan’a bass throbbing and Mick Carless adding tasty drum rolls and riding his hi hats. The band’s cover of Jerry Merrick’s ‘From The Prison’ is a melodic, bluesy folk rocker with Mick Dolan’s acoustic guitar to the fore. ‘A Song Of Summer’ is a breezy mid-tempo tune, another wonderful mixture of acoustic and electric guitars aided by the relaxed rhythm section of Steve Dolan and Mick Carless. A cover of Bob White’s ‘Love’ is a mellow folk psych rocker featuring organ, acoustic and electric guitars, and gorgeous vocal harmonies. The album closer ‘The Ballad Of Marmalade Emma And Teddy Grimes’ features chiming acoustic guitar and a folk rock solo along with vocal harmonies bringing to mind the sound made popular by Rod Stewart and Ronnie Lane with Faces in the mid 1970s. The track was selected as the a-side of the band’s second and final single. Sadly neither the singles or albums made any impact on the charts and Hard Meat broke up in early 1971.

Disc three comprises the nine tracks, previously unreleased, recorded in 1969 for Chris Blackwell’s Island Records label, including the two sides released as the group’s debut single. The opening track, and single a-side, is a cover of Lennon and McCartney’s ‘Rain’ with gorgeously phased guitars and nicely echoed vocal harmonies. Despite the tune’s commercial accessibility it failed to sell. The band’s cover of Dylan’s ‘Most Likely You’ll Go Your Way, I’ll Go Mine’ features a crisp wah wah aided lead guitar line, booming bass and piano accents, the take highlighted by Mick Dolan’s towering solo. ‘Liquid Boats’ is a gorgeous acoustic guitar instrumental. ‘Walking Down Up Streets’ is a psychedelic blues rocker with horns and trippy lyrics, yielding a Traffic vibe, and Dolan’s solo playing the song out. ‘Erection’, like the band’s name, was apparently merely a cheeky schoolboy play on words. The song itself is dominated by a drum solo, although it is highlighted by Mick and Steve Dolan trade licks on lead and bass guitar with the former also contributing mouth harp. A cover of Abel Meeropol’s ‘Strange Fruit’ made popular by Billie Holiday, is an acoustic take with a King Crimson vibe. The version of ‘Run Shaker Run’ is much shorter, at four and a half minutes, than the one included on the group’s debut album. The song includes Hard Meat’s signature mix of acoustic and electric guitars, a trebly lead line, Carless’ congas and Steve Dolan’s bobbing bass especially notable, as are Mick Dolan’s two solos. ‘Burning Up Years’ features a bass intro and bursts of lead guitar as well as the band’s signature tempo and volume changes, with strings added for good measure. The track, the album’s longest at over six minutes, closes with a fiery Mick Dolan solo. The tune also appeared as the b-side of the band’s debut single. The album closes with the playful, folkish ‘Don’t Chase Your Tail’, its acoustic guitar and piano intro reminiscent of The Band, with flute adding a psychedelic tinge to the tune.

‘The Space Between: The Recordings 1969-1970’ comes in a clamshell box. The set’s three discs come in cardboard mini-LP sleeves, ‘Hard Meat’ in gatefold. The box set comes with a 20 page full color booklet with full track listings and an extensive essay by Steve Pilkington. The booklet is lavishly illustrated with photos of album artwork, the band, posters and other memorabilia. Hard Meat sounds better than ever thanks to the remastering job, from the original master tapes, by Ben Wiseman. The compilation will appeal to fans of progressive and psychedelic rock as well as late 1960s/early 1970s rock and comes highly recommended.