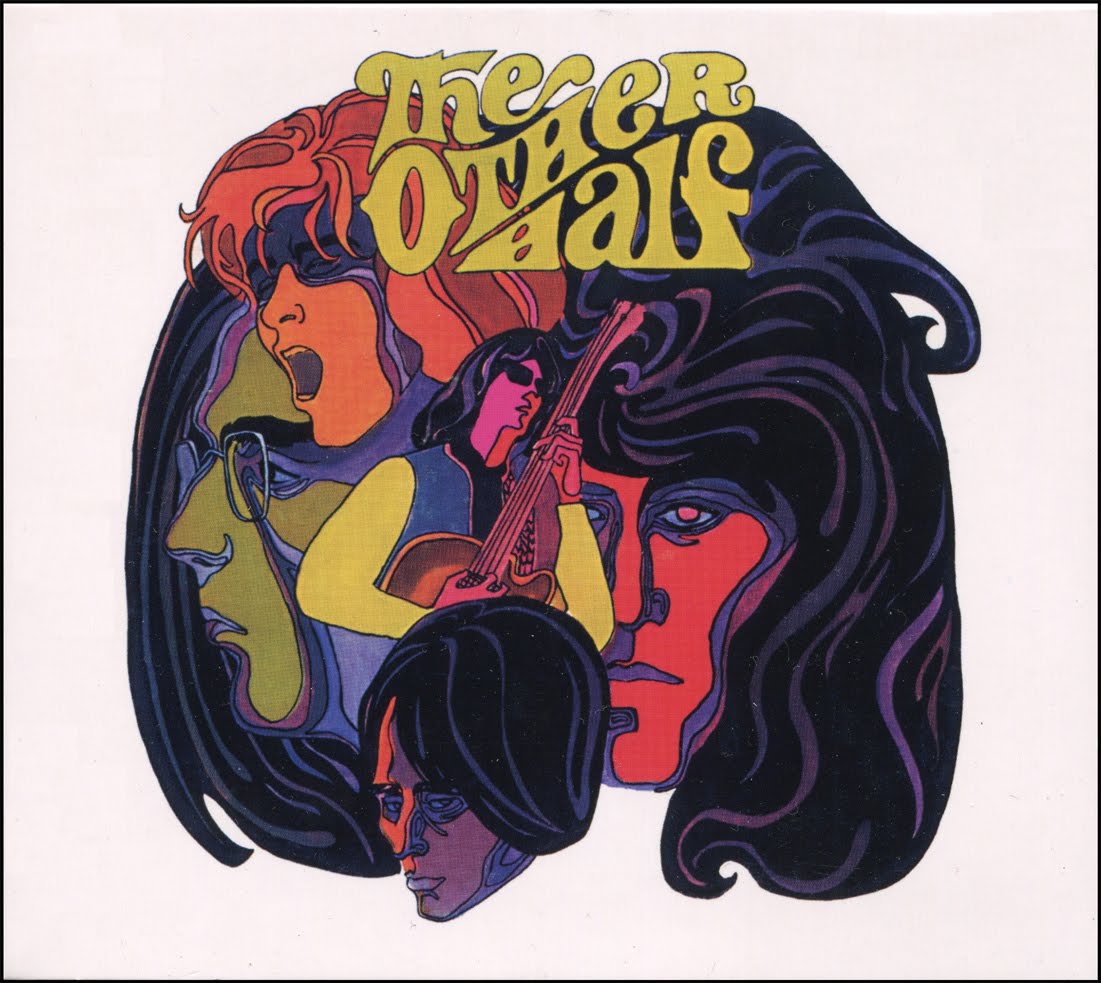 After leaving The Sons Of Adam, lead guitarist/vocalist Randy Holden joined vocalist Jeff Nowlen, rhythm guitarist/vocalist Geoff Western, bass guitarist Larry Brown and drummer Danny Woods in Los Angeles based rock The Other Half, his influence changing the band’s direction from vocal based garage music to the loudest big stage band sound of the time.

The group relocated to San Francisco where their Yardbirds/Rolling Stones influenced sound filled venues such as the Avalon Ballroom and resulted in the recording of an album and several singles between 1966 and 1968.

Lion Records, UK, reissued ‘The Other Half’ supplementing the original stereo album with 5 mono non-LP single sides, a total of 15 tracks, with a run time of just over 41 minutes. The long player contains nine band originals with a cover of Arthur Lee’s ‘Feathered Fish’ which Holden’s former band The Sons Of Adam had recorded after his departure, with replacement Craig Tarwater on lead guitar, despite the song being a long standing part of the group’s live repertoire. Thank goodness Holden took the song with him as The Other Half’s version smokes, sounding very much like Lee’s band Love, but much heavier thanks to Holden’s blazing lead guitar line and soaring solo. On ‘Flight Of The Dragon Lady’ Holden’s guitar is reminiscent of the Yardbirds brief Jeff Beck/Jimmy Page period evoking visions of ‘Happenings Ten years Time Ago’. ‘Wonderful Day’, a single a-side, brings to mind Love’s halcyon days of ‘Da Capo’ and ‘Forever Changes’ with its gorgeous vocal harmonies although Holden’s guitar is burning much higher octane fuel. ‘I Need You’, another a-side penned by Holden with former The Sons Of Adam band mate Mike Port, is a full on sonic attack with racing drums, throbbing bass and power chord riffing, its call and response vocals leading to an incendiary Holden solo anticipating his days to come with Blue Cheer and even more his 1970 heavy psychedelic masterpiece ‘Population II’ recorded by the guitarist aided only by ex-Kak drummer Chris Lockheed. ‘Oz Lee Eaves Drops’ is a raved up acid rocker a la the Yardbirds with mouth harp accents and a brief drum solo joining Holden’s feedback laden solo and lysergic lyrics including “get you, get you high” fitting nicely with the title’s reference to Owsley Stanley III. ‘Bad Day’, also issued as a b-side, features quivering fuzz and wah wah aided guitar, while ‘Morning Fair’, an a-side, exhibits Holden’s Eastern influences, with the guitarist adding a restrained solo outro. ‘What Can I Do For You, First Half’, another a-side, is a trippy tune, its quivering lead guitar bringing John Cipollina of Quicksilver Messenger Service to mind, the tune’s riff building even as Holden’s lead line and solo remain restrained before the tempo quickens as the song segues into ‘What Can I Do For You, The Other Half, the album’s closer and longest track at nearly seven minutes, opening with a Woods drum solo before Holden opens up, soloing effortlessly, carefully controlling feedback, his guitar screaming as the band holds the groove and Nowlen repeats the chorus “what can I do for you” over and over as Holden again cuts loose, his solo roaring as he runs up and down the fretboard, his string bending again evoking visions of the soon to come “Population II’. The song’s tempo quickens, its repeated refrain “come on baby, come on now” and insistent riff build to a rave up and feedback fueled close. The bonus material starts with the non-LP ‘I’ve Comes So Far’, a commercially accessible b-side which finds Nowlen’s mouth harp supporting Holden’s fuzzed out solo. The band’s best known tune, the non-LP a-side , Jeff Nowlen’s ode to drug usage ‘Mr. Pharmacist’ has appeared on numerous garage/psychedelic compilations including the famous ‘Nuggets’ series with lyrics such as “Mr. Pharmacist can you help me out today in your usual lovely way, oh Mr. Pharmacist I insist that you give me some of that Vitamin C ….Dear Mr. Pharmacist won’t you please give me some energy…Hey Mr. Pharmacist, I’ll recommend you to my friends, they’ll be happy in the end, Mr. Pharmacist can you help send me on a ‘delic trip….Dear Mr. Pharmacist use your mind, you better stock me up for wintertime….Oh Mr. Pharmacist can I plead, gimme some of that powder that I need….Dear Mr. Pharmacist I’ll be back, with a handful of empty sack”. The psychedelic anthem ends with Holden soloing the song out. ‘No Doubt About It’ a non-LP b-side, is another fuzz filled Yardbirds style rave up. ‘It’s Too Hard’ taken from a French EP features an intro reminiscent of ‘Mr. Pharmacist’, adding a QMS ‘Who Do You Love’ riff which builds to another Yardbirds influenced rave up ending. Another track from the French EP, ‘I Know’ features Holden’s lead guitar gliding gently over the top until its final minute when his quivering, fuzzed out solo brings the song and set to a close. Randy Holden left soon after ‘The Other Half’ was recorded, unhappy with the recording and the guitar he was playing at the time, stating “I was trying to accommodate everyone else at the expense of my own soul and happiness.” Despite his misgivings, the album has been described as “awesome incendiary rock”, a testament to Holden’s perfectionism and steadfast loyalty to his musical intentions..

The Lion Records reissue of ‘The Other Half’ comes in a digipak with complete track listing as well as full writing and musician credits. The set complements the recent issue of Randy Holden’s work with The Fender IV and The Sons Of Adam on High Moon Records’ compilation ‘Saturday’s Sons’, and setting the stage for 1970’s ‘Population II’. The compilation will appeal to fans of garage rock, psychedelic rock, hard rock, guitar rock, 1960s rock and classic rock and comes highly recommended.