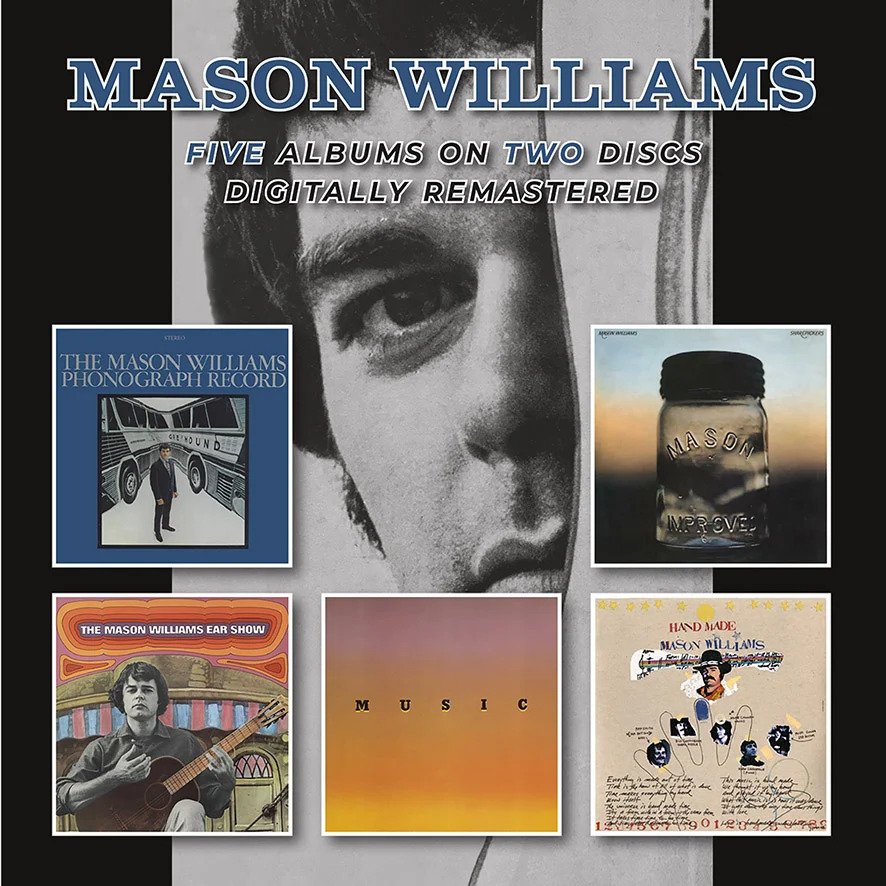 Born August 24, 1938 in Abiline, Texas, Mason Williams is an American classical guitarist, composer, singer and writer best known for his 1968 instrumental ‘Classical Gas’ as well as a writer for The Smothers Brothers Comedy Hour, The Glen Campbell Goodtime Hour and Saturday Night Live.

In 1969 ‘Classical Gas’ won 3 Grammy Awards when released as a single from ‘The Mason Williams Phonograph Record’ which was issued in 1968. The Grammys were for “Best Instrumental Composition”, “Best Contemporary-Pop Performance, Instrumental” and “Best Instrumental Arrangement”, with Mike Post as arranger. The song sold over a million copies earning Williams a gold disc. He received two more Grammy nominations for “Best Album Cover Design” for his 1970 and 1971 LP s, ‘Handmade’ and ‘Sharepickers’.

‘Classical Gas’ was composed and performed by Williams with instrumental backing of The Wrecking Crew. He was the head writer for The Smothers Brothers Comedy Hour at the time of its release and premiered the composition on the show. After the tune reached the Top 10, Williams asked an experimental filmmaker named Dan McLaughlin to adjust a student video montage that he had created of classical art works using Beethoven’s ‘5th Symphony’ and edit it in time to ‘Classical Gas’ using the visual effect now known as kinestasis. The work ‘3000 Years Of Art’ premiered in 1968 on an episode of The Smothers Brothers Comedy Hour. The song peaked at #2 for 2 weeks in August 1968, behind ‘Hello, I Love You’ by The Doors. On the US Easy Listening chart, it went to #1 for 3 weeks. Williams re-recorded ‘Classical Gas’ as a solo guitar piece for his 1970 album ‘Handmade’. This version was used in the 1999 feature film ‘The Study Of Us’, directed by Rob Reiner, starring Bruce Willis and Michelle Pfeiffer. In 1998, Broadcast Music Incorporated (BMI) awarded Williams a special Citation of Achievement. ‘Classical Gas’ has logged over five million broadcast performances to become BMI’s all-time number-one instrumental for radio airplay.

Beat Goes On (BGO) Records, UK, has gathered Williams’ five Warner Brothers albums issued between 1968 and 1971 on the new ‘Five Albums On Two Discs’ collection. Williams’ major label debut ‘The Mason Williams Phonograph Record’ released in February 1968, with ‘Classical Gas’ c/w another Williams original ‘Long Time Blues’ issued as the long player’s sole, incredibly successful single. The album featured support from several members of renowned Los Angeles session musicians The Wrecking Crew, namely guitarists Al Casey and James Burton, electric bassist Larry Knechtel, and drummer Jim Gordon, with Williams contributing guitar, twelve-string guitar and banjo and Mike Post handling the long player’s arrangements. November 1968 marked the appearance of Williams’ follow-up LP ‘The Mason Williams Ear Show’. The album contained three singles, ‘Saturday Night At The World’ c/w ‘One Minute Commercial’, ‘Love Are Wine’ c/w ‘Generatah-Oscittatah’ and the similarly humorously titled ‘Cinderella-Rockefella’ using the same b-side. Sadly, none of the singles, like the albums they were drawn from charted.despite contributions from guitarists Al Casey, Ray Pohlman and Michael Deasy, electric bassist Larry Knechtel and drummer Hal Blaine of The Wrecking Crew. Williams’ third Warner Brothers album ‘Music By Mason Williams’ hit stores in March 1969 supported by two singles, an inspired adaptation and arrangement of ‘Greensleves’ c/w ‘$13 Stella’, the b-side taken from ‘The Mason Williams Ear Show’ and ‘A Major Thang’ c/w a cover of Patty Ingles’ ‘A Gift Of Song’. The singles failed to chart although the LP did hit #27 in Canada. Williams was again aided by members of The Wrecking Crew with Lyle Ritz and Ray Pohlman on electric bass, Hal Blaine behind the drum kit, Al Casey, James Burton and Michael Deasy appearing on guitar, Larry Knechtel adding piano and special guest contributions from John Hartford on fiddle and banjo and Tommy Smothers playing harmonica on ‘The Brother’s Theme. Williams’ fourth WB album ‘Handmade’ appeared in March 1970 accompanied by two singles, the first, with ‘Jose’s Piece’ on the a-side, was paired with two b-sides, Williams’ ‘The Exciting Accident’ on the bottom side of one version, while a cover of Tim Hardin’s ‘Find A Reason To Believe’ was used on the second. The album’s second single was the re-recording of ‘Classical Gas’ used in ‘The Story Of Us’ c/w ‘Greensleeves’, previously issued as an a-side to accompany ‘Music By Mason Williams’. The LP, like its predecessors failed to dent the US charts, Williams this time supported by Rick Cunha on 2nd guitar, Pat Smith on bass, Bill Cunningham on dobro, Bhen Lanzarone on piano and Mike Cannon on drums. Williams’ final Warner Brothers album ‘Sharepickers’ was released in October 1971 with only one single supporting it, a coupling of a-side ‘Train Ride In G’ and b-side ‘Here I Am Again’, the 45 again failing to chart despite support from The Wrecking Crew members Al Casey contributing guitar, Larry Knechtel appearing on bass and Hal Blaine on drums, supplemented by percussionist Milt Holland and guitarist Rick Cunha. Following the LP’s lack of commercial success Williams took an extended leave from the music industry, concentrating on his writing career, before reappearing with a series of smaller label releases. However, Williams’ musical legacy from his halcyon days at Warner Brothers is most impressive indeed, with the five albums reviewed here serving as proof positive.

The discs of ‘Five Albums On Two Discs’ come in a slimline jewel case with a cardboard slipcase. The set is accompanied by a full color booklet with full track annotations, photos and an extensive essay while the sound has been remastered in high definition. This set will appeal to classical guitar as well as 1960s and 1970s pop music fans and comes highly recommended.