‘kiss my emoji ring’ by I Work In Communications | Album Premiere 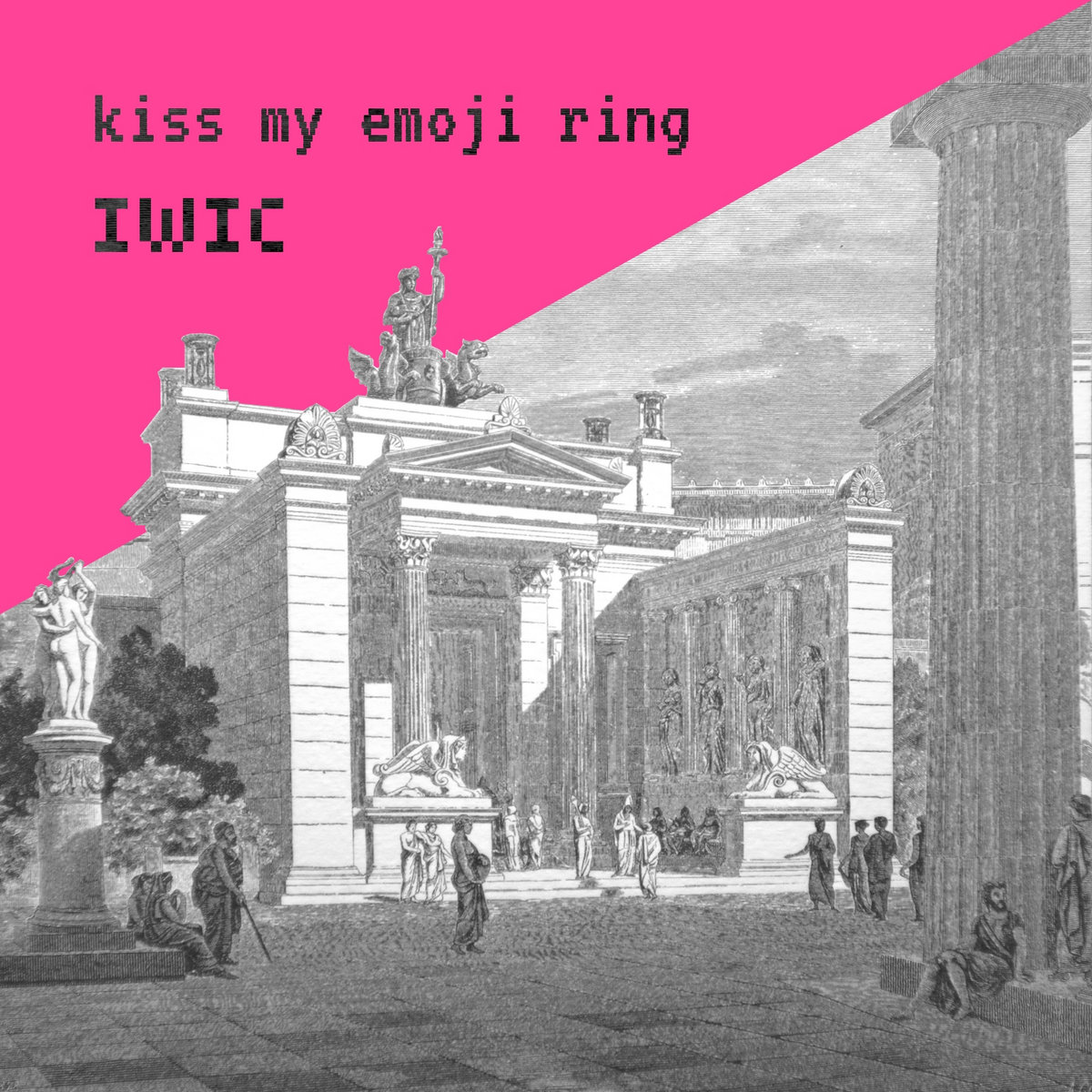 ‘kiss my emoji ring’ by I Work In Communications | Album Premiere

Exclusive album premiere of ‘kiss my emoji ring’ by I Work In Communications, out September 30th, 2022 via tier.debut.

‘kiss my emoji ring’ is I Work In Communications’ second album of experimental post-rock, electronica and improvised jazz music. Headed by Marius Mathiszik and featuring renowned musicians: George Crowley and Dave De Rose. Here the trio present cosmic, liquid, free-ranging, and highly experimental music. Highly irregular, but never brutal, never austere. Indeed, the “challenge” it poses the listener is not to smile at the warm, expansive pleasure zone in which it invites you to immerse yourself. Each track takes its own unique form and shape, never self-indulgent, never outstaying their welcome – indeed, you’re only left thirsting for more.

Recorded between Athens and London, this collection by the trio I Work In Communications is cosmic, liquid, free-ranging, and highly experimental. Highly irregular, but never brutal, never austere. Indeed, the only “challenge” it poses to the listener is not to smile at the warm, expansive pleasure zone in which it invites you to immerse yourself. ‘kiss my emoji ring’ joyfully traverses the worlds of post-krautrock, jazz improv and electronica. Finding themselves separated both locally and internationally due to national lockdowns in response to the global Covid-19 pandemic, the material for ‘kiss my emoji ring’ was remarkably created through a process of free-improvisations via a series of individual and isolated recording sessions, subsequently edited, arranged and recomposed by Mathiszik into their current form. The result is as if they were a single, organic, shapeshifting, cosmic, or submarine entity. Together, they roll.

“The majority of the tracks started life with my ambient and loop-based guitar improvisations. I’d put my guitar through a series of machines and electronics which would then mess it up to a point where the new signal would become a new source of inspiration to play off. I subsequently edited these tracks and sent them to Dave De Rose in London, with the instruction to record one all improvised drum takes in response to my tracks, without any pre-listening, and with no click, et cetera.

Dave has an amazing capability to improvise drums in a way that actually suggests a kind of dramaturgy, even concrete forms in some cases. That made it easy for me to add some new layers on top of his takes and based on his suggested musical cues. Still, things were left wide open, there were barely fixed tonalities for example at this point. We then invited George to contribute sax on some tracks, again, in one or two spontaneously improvised takes. I then added bass, additional synths and electronic layers in one last round, this time interpreting harmonies implied by George’s melodic playing.

It was the first time I had worked in this way. The difficult situation of the pandemic made me learn a new compositional technique of writing off other contributor’s live improvisations. It was an investigative journey into the possibilities and boundaries of collaborating with musicians that are separated in time and space”. (Marius Mathiszik)

The overture to ‘Blubberplanet’ establishes the terrain we’re in – fathoms below the ocean explored on Miles Davis’ ‘Bitches’ Brew’, dub depths in which sax, drums and electronic reverb combine and dance beatlessly, beautifully.

‘Mission To Find A Christmas Tree On Mars’ is something, somewhere else again, up in the cockpit, proceeding with rapid velocity, a darkly elastic Joy Division-esque bassline slaloming around oncoming meteorites in its Surrealist quest.

‘F# Politics’ reveals further the sheer range of colour and shade of I Work In Communications – barrages of analogue synth come babbling from all sides to undertake a superheated debate in the chamber of the cosmos.
‘Nebula’, meanwhile, features an almost martial percussive rhythm, offset by a ticking bass and primordial, bubbling electronica. George Crowley’s sax is a thing of warmth and deep satisfaction, mingling coitally with a wash of reverb.

A title like ‘Take That Drone Off My Lawn’ hints at the dolphin playfulness of ‘kiss my emoji ring’, but the track is sublime, despite the lack of solemnity. Midway through, it mutates into an approximation of the lonely horn of a train cutting across flyover terrain. We are traversing waking dreamland, indeed, borne by a flow of free association that takes us we know not where. The bassline, meanwhile, feels like Peter Hook submerged in a turquoise pool.

Finally, ‘Blubberplanet II’ – very different in feel from its predecessor – with Arkestra ghosts playing like angels and demons, seeming to dissolve, exquisitely, into the infinite, before bursting back to life. Each of these tracks has taken its own unique form and shape, never self-indulgent, never outstaying their welcome – indeed, you’re only left thirsting for more. You sense, in every chord, every breath, every layer, every beat of this album, the joy that I Work In Communications had in making it. It’s a joy that transmits wholly, every last drop, to the listener.

Marius Mathiszik was born in 1985 in Moers in West Germany, a small town famous for its international Free Jazz Festival. After taking his first steps in the music scene of the industrial Ruhr Area, he moved on to study Jazz & Pop guitar at ArtEZ Conservatory in Arnhem, in the Netherlands. While experimenting in different free-improv projects, he soon found a musical haven as bass player and co-composer in the band, Nausica. The Dutch-Polish art-pop outfit emerged from the curious, open-minded and ever vibrant Arnhem scene. Through a span of 4 years, Nausica played many concerts in Europe and released two EPs on German indie label Woda Kolonska / HeyBlau! They collected a loyal fanbase that loved the band’s eclectic style and extravagant live sets, which were accompanied by the visual artistry of the live painters from Amsterdam, VJ Glitterende Eenhoorn and Menah. A concert performed as part of the talent programme Le Guess Who with an extensive feature on MTV further propelled the group’s reputation. In 2015, Marius left Nausica to focus on other projects. He released a solo record under the pseudonym Jan Matiz one year later, highlighting his imaginative, minimalistic and at times atonal compositional style on the guitar. During this time he gigged at rave festivals with Electronic duo Erdfisch and also started to experiment with the medium of short filmmaking. In 2017, Marius moved to Athens, Greece. It was there that he rediscovered his love for free improvised music. A recording session with the local scene’s Gustav Penka and Dimitris Kalousis led to the first album by post-Kraut outfit Forest Binary (2020, Fortune Cut). The same session featured Dave De Rose as bass player and co-producer for the record. Marius and Dave soon discovered that they had a deep musical chemistry and released a synergetic work “I Work In Communications” (2021, DDR) with manipulated cuts from the Forest Binary sessions. Marius is currently involved with various line ups within Athens’ free improv scene and also has plans to release the already finished second Jan Matiz album in the near future.

Dave De Rose is an Anglo-Italian multi-instrumentalist and producer based in London. Having moved to the UK from Rome in 1996 to study Jazz at Guildhall, he graduated with distinction and won their artist development award, whilst working on both live and recordings. Dave has in recent years begun to build a reputation for fearless sonic explorations, ranging from freely improvised and jazz-related musics, to non-commercial noise-based music, absorbing sound-art and blended with an audacious and original approach to grooves. He has self-released 22 records on his own label (Dave De Rose Records), whilst having toured and recorded with artists such as Electric Jalaba, Moloko, Roisin Murphy, Bastille, Mark Ronson & The Business International, Mulatu Astatke, Rokia Traore, Jamie Cullum, Scroobius Pip, Raul Monsalve y los Forajidos, Forest Binary, Vula Viel, and Trio Trekke. Both his recent projects, Agile Experiments and ‘plants heal’, have caught the imaginations of musicians and the underground experimental jazz community worldwide, receiving reviews, praise and support from The Wire, Giles Peterson, BBC Radio Freeness, Bandcamp’s ‘New and Notable’ & ‘Record of the Day’, Jazz FM, Worldwide FM, Jazz Journal, NTS, Music Is My Sanctuary, UK Vibe, MusicMap, The Jazzmann, Jazz Views, Mafalda, Chris Menist, Colectivo Futuro, and Alan Mckinnon.

George Crowley, saxophonist, clarinetist, composer and promoter, is a key player within London’s creative jazz and improv scene and is also increasingly well-known across the UK and in Europe. As a performer he is active across a range of styles and his energy and expressive, warm saxophone are equal to none. He can be found playing with bands and musicians such as Yazz Ahmed, Melt Yourself Down, Julian Argüelles’ Septet, Rick Simpson’s Klämmer, and the Olie Brice Quartet featuring Jeff Williams.