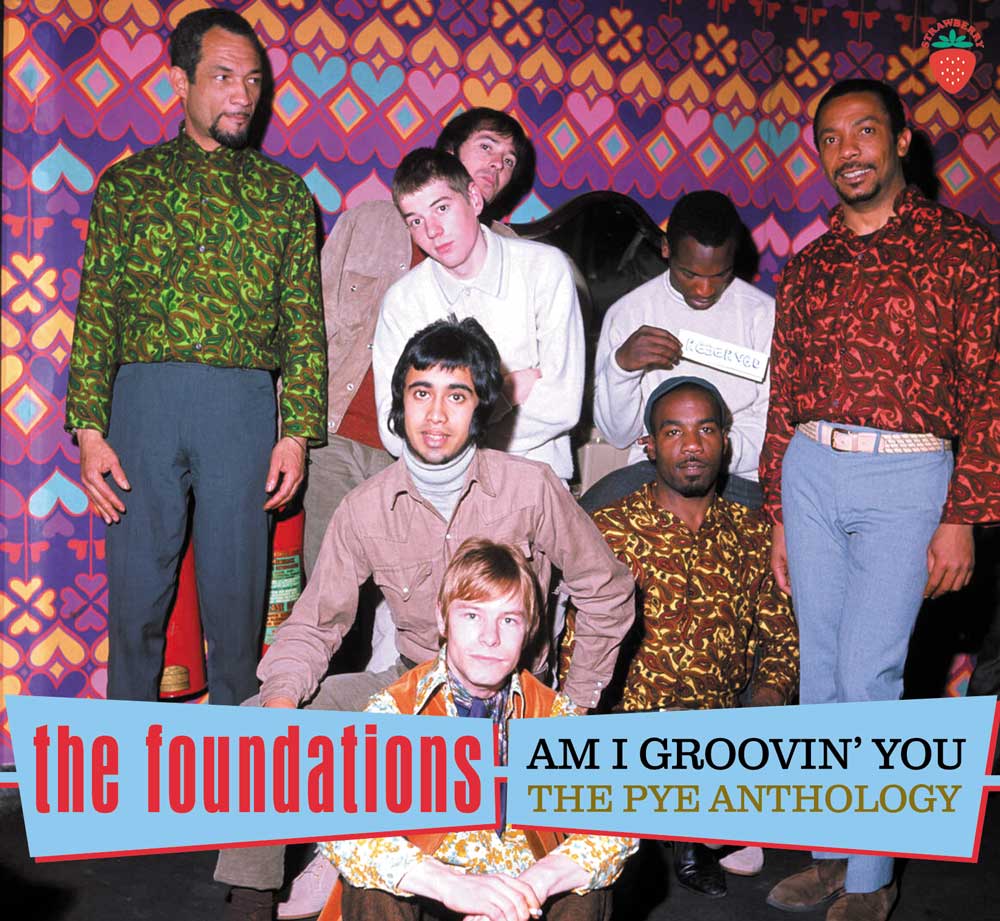 With a sound befitting Motown’s golden age multi-racial British soul act The Foundations released a series of successful singles between 1967 and 1970, becoming the first to have a hit in the US along the way.

Cherry Red Records has gathered the group’s UK back catalog of ten singles and three albums, supplemented by re-recordings made for a 1969 compilation album on the Marble Arch label, tracks that went unreleased at the time, post-Foundations releases by original vocalist Clem Curtis and both sides of a 1975 single featuring Curtis’ replacement Colin Young issued under the moniker The New Foundations, in a new three disc box set on the Strawberry Records imprint titled ‘Am I Groovin’ You: The Pye Anthology’.

Disc one is centered around stereo and mono versions of the band’s self-titled debut album issued in November 1967. The LP includes the group’s breakthrough smash ‘Baby Now That I Found You’ written by producer Tony Macalay and album musical John Macleod. With lead vocals by Clem Curtis the tune topped the UK charts while reaching #11 in the US when released as a single in August 1967 and featured the original band consisting of British guitarist Alan Warner, bass guitarist Peter Macbeth and drummer Tim Harris, Sri-Lankan keyboardist Tony Gomez, Dominican trombonist Eric Allendale Dubuisson, Jamaican tenor saxophonists Pat Burke and Mike Elliott in addition to Curtis. The album, dominated by Macaulay/Macleod compositions, also included tunes taken from The Foundations live repertoire such as a cover of Joe Tex’s ‘Show Me’, but failed to chart. However, the non-LP Macaulay/Macleod penned ‘Back On My Feet Again’ quickly returned the group to the UK charts, peaking at #18 when released in January 1968, followed rapidly by another Macaulay/Macleod non-LP single ‘Any Old Time (You’re Lonely And Sad)’, a #48 UK hit issued in April. Both singles are included on the disc as is The Foundations’ US breakthrough ‘Build Me Up Buttercup’ penned by Macaulay and Manfred Mann’s Mike D’Abo, who are featured on organ and piano respectively. The single was the first to feature vocalist Colin Young, Curtis’ replacement when he and Elliott departed the group following a 1968 tour that resulted in the live LP ‘Rocking The Foundations’ the centerpiece of the third disc of this set. ‘Build Me Up Buttercup’ was the band’s biggest US hit, topping at #3 (#2 in the UK) following its November 1968 release. The single’s b-side, also included on disc one, was a psychedelic rock one-off penned by band members Warner, Gomez and Macbeth and showcases the band’s instrumental abilities, especially Warner’s guitar and foreshadows his later work with guitarist/vocalist Paul Gardner in the prog rock group Pluto.

Disc two is centered around ‘Digging The Foundations’, the band’s third and final album, released in 1969. The LP features the group’s last UK top 10 single, ‘In The Bad Old Days (Before You Loved Me)’, another Macaulay/Macleod tune, which peaked at #8, but the album failed to chart and the relationship with Macaulay soured, as The Foundations came to an affable but inevitable end. However, the music has withstood the test of time. The discs’ first three tracks are stereo recordings of tunes which were mainstays in their live performances, ‘Harlem Shuffle’, ‘Tomorrow’ and this box set’s title track. The eleven tracks composing ‘Digging The Foundations’ are a mix of Macaulay/Macleod compositions and band originals, including the standout Warner/Gomez/Macbeth penned ‘Till Night Brought Day’. Other highlights of disc two include the Colin Young vocal version of ‘Baby Now That I Found You’. The Foundations’ final UK hit and band original ‘Born To Live Born To Die’ which peaked at #46 when issued as a single in August 1969 and the heavy R&B Young penned ‘I’m Gonna Be A Rich Man’, the group’s final single, released in July, 1970.

‘Am I Groovin’ You: The Pye Anthology’ comes in a quad-fold digipak and includes a full color 24 page booklet filled with photos of the band as well as album and single artwork, full track annotations and an extensive essay by Lois Wilson of MOJO Magazine. The set sounds incredible thanks to the mastering job of Simon Murphy. The boxed set contains 75 tracks in all and is absolutely the last word on The Foundations. The collection will be of interest to 1960’s pop and soul music fans and comes most highly recommended.

The Foundations – ‘Am I Groovin’ You: The Pye Anthology’ (Cherry Red Records 2022)