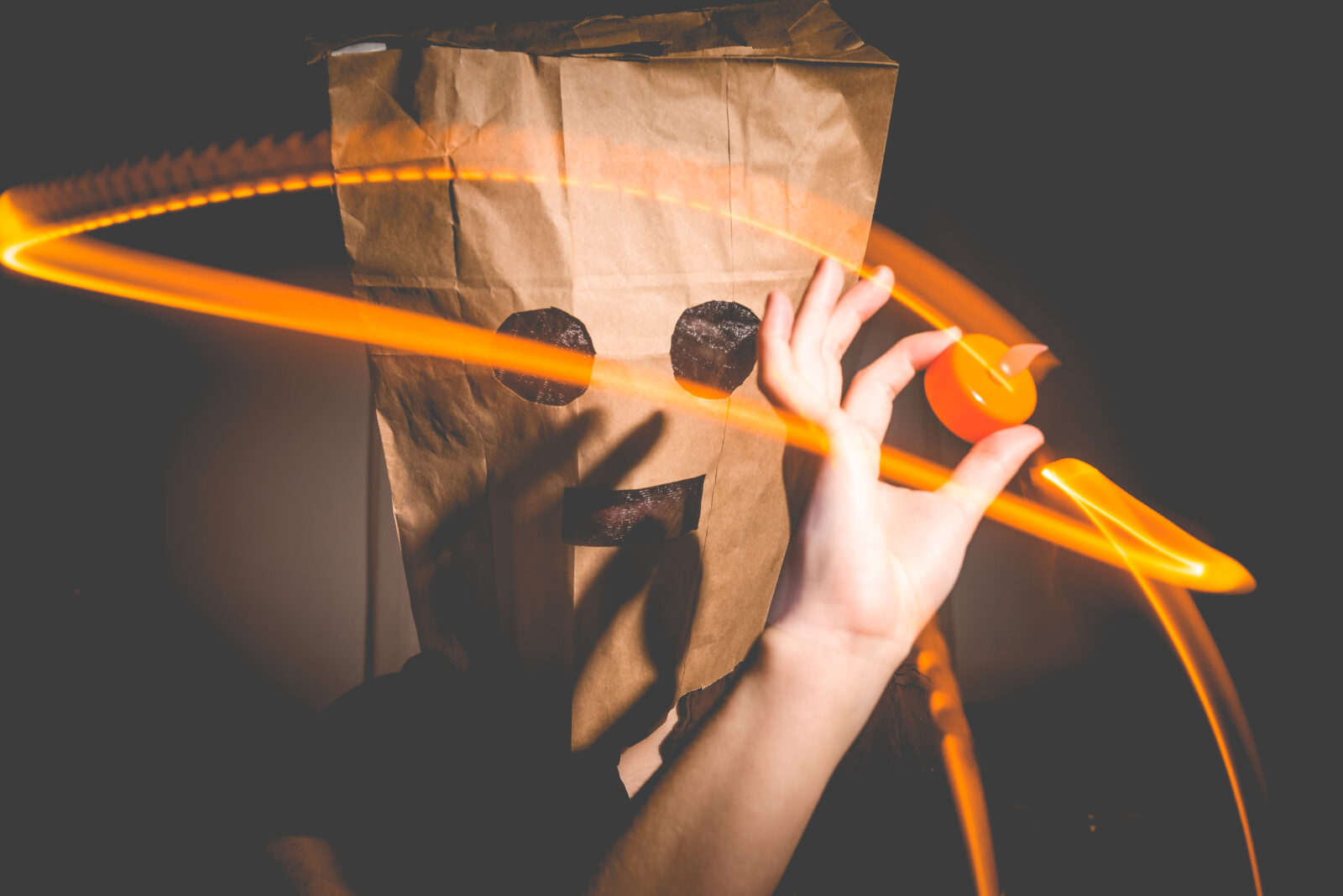 Throwaway’s ‘Hand that Feeds You’ EP is a pissed-off, burnt-out, and checked-out soundtrack to the Great Resignation. Throwaway has a massive sound for a band that’s technically a duo.

Featuring guitarist Kirsten Carey and drummer Jonathan Taylor the art rock/no wave duo is joined by beatmaker Oliver Dobrian and vocalist Ami, the lead singer in the Osaka-based band O’Summer Vacation. Throwaway plays with a shit-ton of attitude and has the musical chops to back it up.

From the introductory track, ‘Intro’ you get a sense of Throwaways (completely relatable) disdain for modern society’s hustle culture, /imagine if you will a town just full of people/people making stairs/ people making people/. The first full track, ‘Glitch Mob’ jokes sardonically /Safety first (after fashion)/. There’s a lot of theater in Throwaway’s presentation. In ‘Kyubabe’ a vocal melody that sounds straight out of a Sondheim musical shifts dramatically from melodic to dissonant. They feel deliberately provocative veering from art rock to something closer to math rock. They note Otoboke Beaver, Deerhoof, and Melvins as influences, but it’s easy to imagine Primus or even Zappa’s impact. 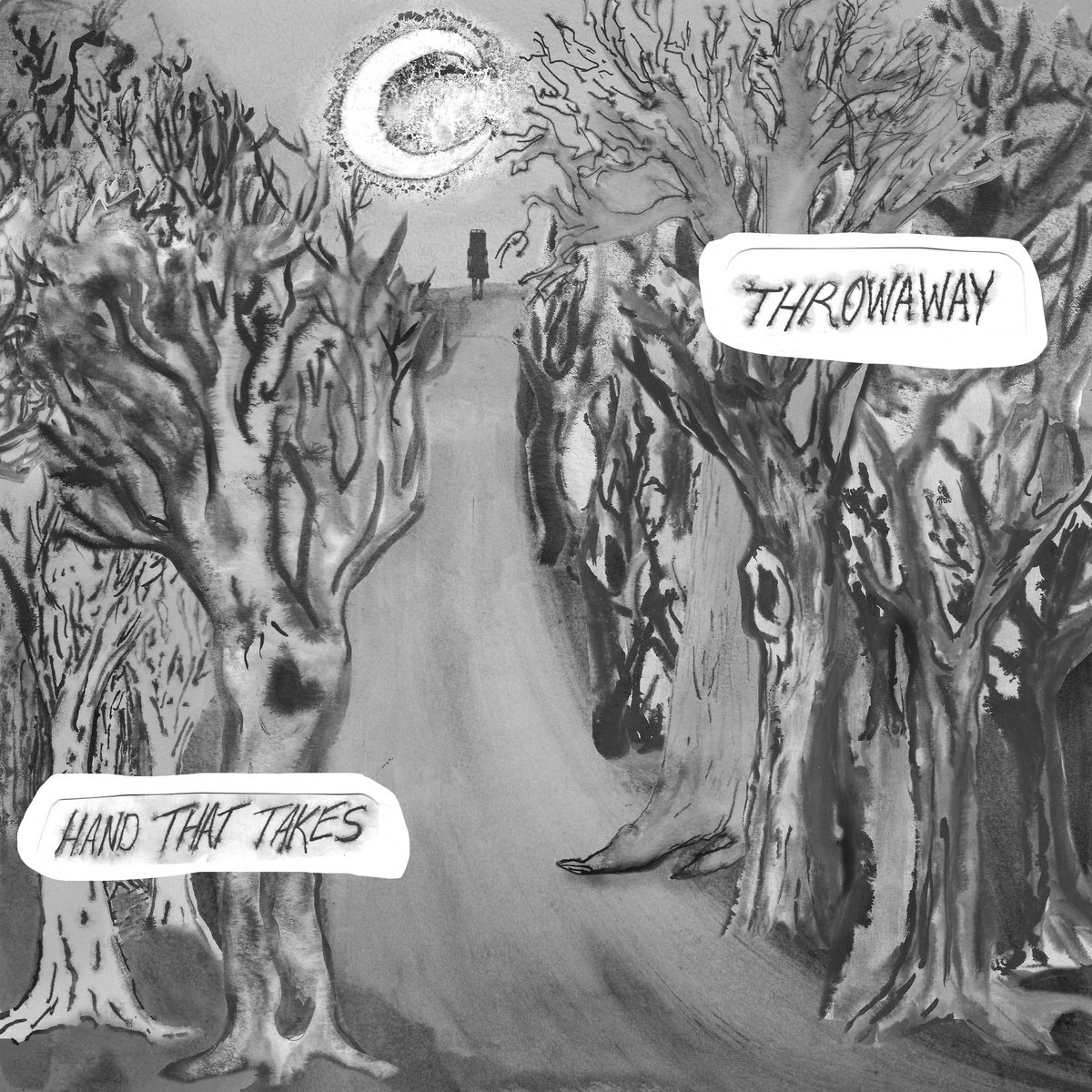 It’s not all doom, gloom, and painfully sharp wit though. In ‘DINOSAUR.’ the repeated phrase /hey motherfucker wouldn’t you know?/ I’m a dinosaur/ is silly, playful, and delightful. Who doesn’t love dinosaurs, right? The last full track, ‘Six’ the vocals begin light and childlike and grow progressively more desperate /there’s a light in the house but it flickers out/I thought it saw a face but it withers with the ceilings/and the clock must have forgot what time it was/I’ll turn it out/ Clocking in at 5:44 this one is a journey through some dark places. It may or may not allude to a haunting woman with a paper bag for a head. With a possible animated TV show and an 18-track rock opera on the way, there’s a lot to look forward to from Throwaway. Until then, bite into ‘Hand that Feeds You’ for a delectably dark time.

You show off some seriously complex chops on this EP. What’s your songwriting process like and how do you work out those mathematical riffs?

Kirsten Carey: This is probably the point where I reveal I studied jazz guitar performance in undergrad. Maybe that and listening repeatedly to the likes of Deerhoof and Mr. Bungle got my brain wired in a slightly different way. I almost always write the guitar part first for Throwaway material, and the riffs usually spring out of improvisation. I’ll just be in a mood, and improvise riffs on the guitar from that point of view until I get something I like.

From there, sometimes I twist them to first the vocal line. Or sometimes I twist them to simply make them more surprising. I don’t want to deliver something an audience has already heard before. I feel kind of self-conscious about that as I write. I want to keep people engaged and on their toes, but not veer too far off the tracks and end up in alienating territory. It’s a difficult line to walk. And subjective, at that. We’re definitely in alienating territory for some!

Was writing this album a cathartic experience? What about playing the songs live?

I’m usually working out personal emotional barbs in my music, and catharsis is a huge part of that. ‘DINOSAUR.,’ ‘Kyubabe’, and ‘Six’ were especially cathartic to write. They actually date back to late 2017 / early 2018 and chronicle that period of my life quite candidly. In “Six,” for example, you can hear me grappling with the decision I’d eventually make to move out of Los Angeles – the disillusionment and severe depression I was going through really color that song. More generally, I’ve been thinking about that song as a narration of the Flight Response, as in Fight or Flight. On ‘DINOSAUR.’, you get the angry version of why I wanted to move. And ‘Kyubabe’ is the most candid picture I’ve ever written of what it’s like to have Thought OCD – the OCD voice is the chorus.

Of course one of you, possibly all of you are dinosaurs–but what kind of dinosaurs?

Oh, excellent question! They’re infinitely less violent than the kind depicted in the song, but I’ve always loved a good Brachiosaurus. Their absurd scale, combined with the fact they’re herbivores, always fascinated me.

But if I, personally, were a dinosaur? Maybe I’m a Triceratops. The Triceratops strikes me as a dinosaur which acts kind of flashy but is actually an introvert. And they’re often screaming, “Get the hell away from me!” and headbutting other random dinosaurs who keep getting into their business and personal space. That’s me.

I don’t want to speak for him, but maybe our current drummer Jonathan Taylor is an Iguanodon or something. Something chill and friendly.

Can you talk a little bit about the upcoming rock-opera?

We’re actually going back to the studio to work on it right after this tour jaunt! It’s 18 songs long and called ‘Odyssey’ — which I’d like to point out that I decided on years ago, long before my favorite anime franchise decided to come out with a video game of the same name. For Throwaway, 18 songs is an hour of material, since our songs are so dense and compact.

The story is an epic journey about going to the grocery store. I came up with that before COVID, actually – the metaphor just got a little more on point. The Throwaway character acts as the “everyman” protagonist. On her journey, she’s beset by two villains: one who represents late stage capitalism, and one who represents unaddressed trauma – or mental illness of any kind – lingering in an adult. It’s about how those two things indirectly interact to make the hero’s journey more difficult to accomplish and what it means for someone to be grappling with both.

It’s important to me that the opera offers resolution but not a neat, pretty bow. Mental illness isn’t something that all of a sudden gets better and goes away, and it bothers me when stories treat it that way. And, unfortunately, the same can be said for the influences at work behind the society in which we live.

She’s on the album art and mentioned in your bio: Who is this mysterious woman with the paper bag for a head?

Her name is Throwaway, and her drummer is a weird little ragdoll guy named Teef. She’s my counterpart in another universe — the universe which exists in our phones, on our computers, behind any screen. People often act differently in that space, and they interact with whatever they’re presented with differently, too. I work as a nerd-culture journalist, and when you’re lucky enough to be both female and a journalist (you’d hear the sarcasm in my voice if I were speaking this), you get to see that first hand quite vividly.

There is a fully-realized, fictional version of her universe that some collaborators and I are…. working on. For something. Maybe that will be realized someday, with enough luck. Going viral would help to that end.