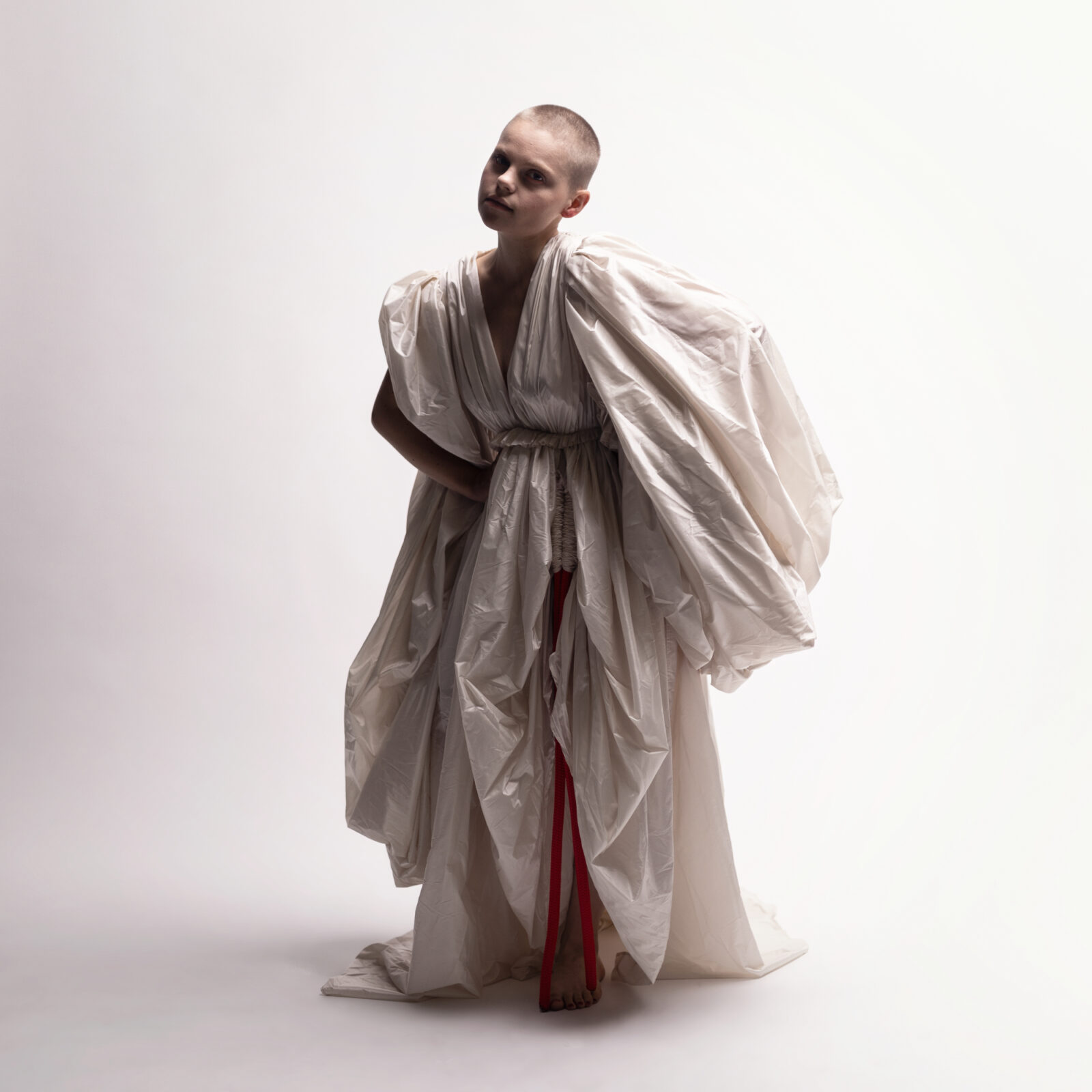 ‘Chimp’ is an album of innovative avant-pop music by the highly celebrated musician Diamanda La Berge Dramm. Based on texts by contemporary poet Steven J Fowler, ‘Chimp’ is Dramm’s first full-length album of her own material. A conceptual, minimal/maximal work that is more than worthy of consideration alongside that of Laurie Anderson and Bjork – indeed, ‘Chimp’ exists alone, in a realm of its own making. Textually and texturally, Chimp is an experience like no other, a journey around its own world that you’ll feel compelled to take again and again.

Based on texts by contemporary poet, Steven J Fowler, Chimp is Dramm’s first full-length album of her own material

Classically trained, Diamanda La Berge Dramm has been playing the violin since she was four, but has long exceeded the protocols and boundaries surrounding classical music, bringing all her training to bear on the extraordinary ‘Chimp’, a conceptual, minimal/maximal work that is more than worthy of consideration alongside that of Laurie Anderson and Bjork – indeed, it exists alone, in a realm of its own making. Strings are treated in a way that is almost ectoplasmic, going beyond the merely tonal and into the abstract, as words, meanings and phrases, fold in on themselves, and the album enmeshes you in its web of intrigue. 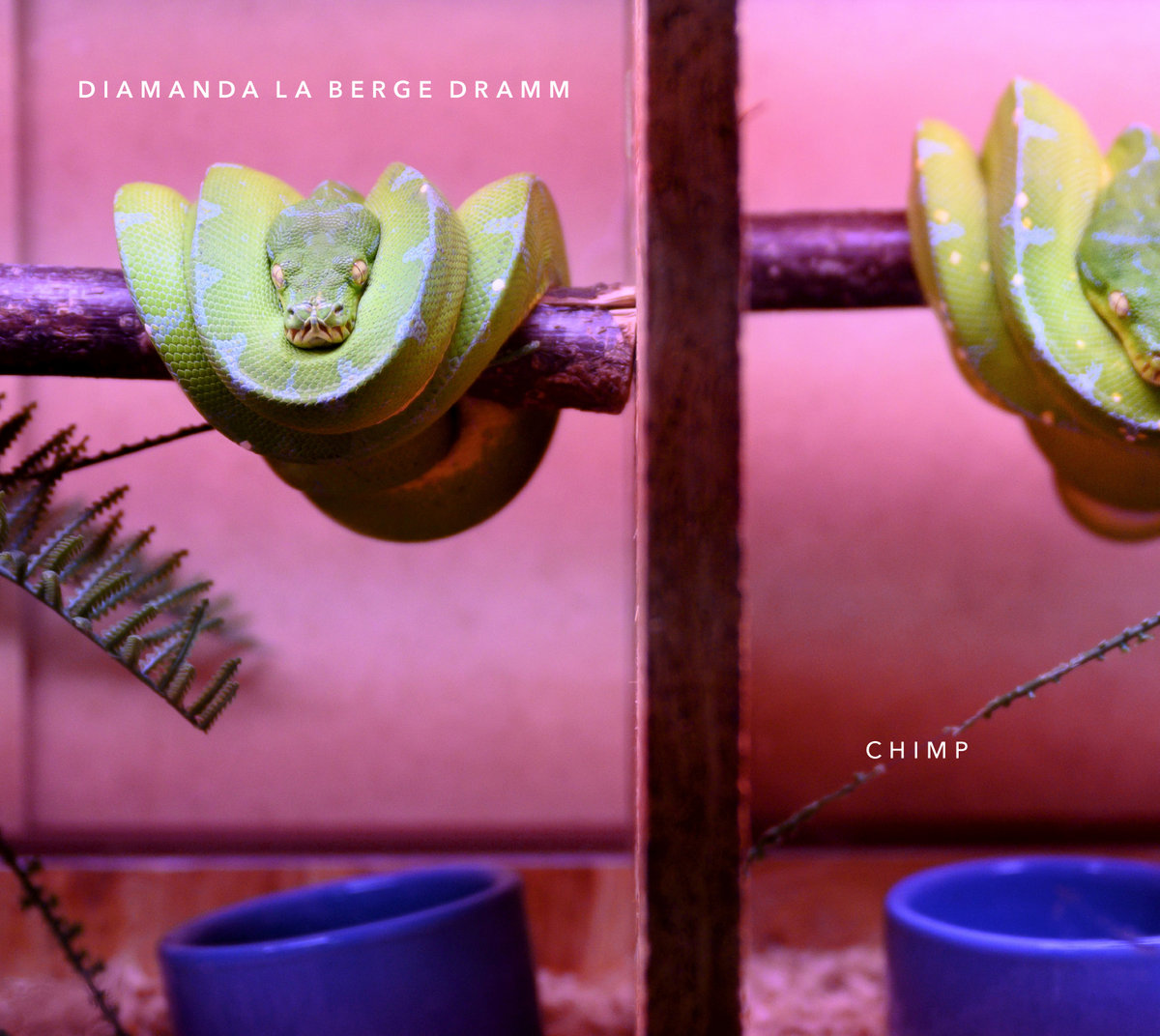 “Besides the voice and some Moog, the whole album is made from violin sounds. To make the synth parts, I sampled a few notes from my Bach/Cage album. Then Iwen the engineer and I recorded a bunch of violin noises and constructed the jungle ambiance.

The text for this album compiles material from two books of Steven J Fowler’s: I Will Show You the Life of the Mind (on Prescription Drugs) (Dostoevsky Wannabe 2020), and The Great Apes (Broken Sleep Books 2022). The juxtaposition of the brain and the monkeys were key to the album. To bring them together, I developed the idea of a doctor’s waiting room – where the beginning and end of the album take place. There is a TV in the corner showing a National Geographic episode about monkeys. During the middle section, we go inside the TV and hang out with them. 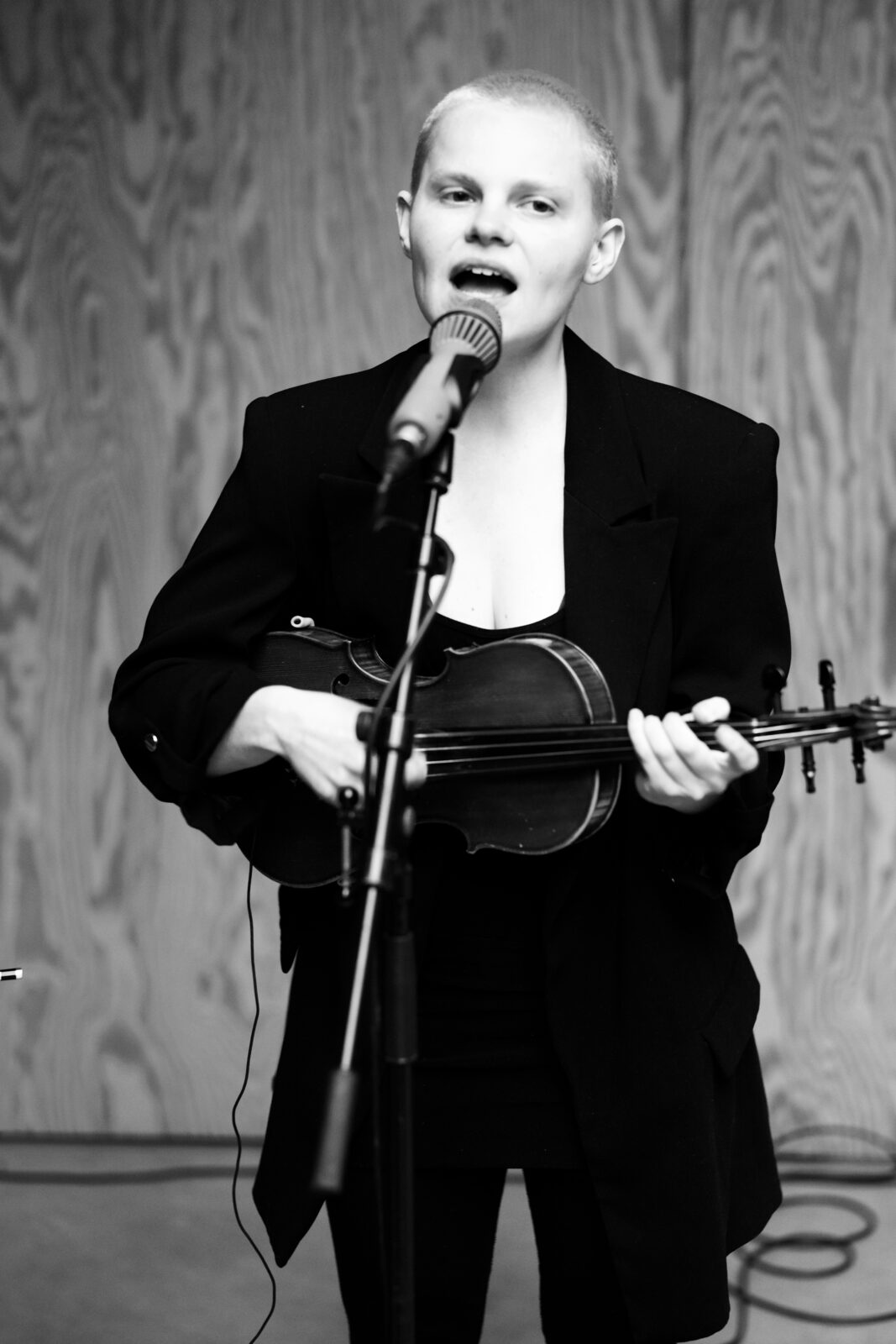 The album feels like a natural evolution of my desire to unfold the violin, both as an object and conceptually”. (Diamanda La Berge Dramm) With ‘Chimp’, Dramm lends a musical dimension to the poetry of Fowler, an avant-garde poet and the founder and curator of Poem Brut, a poetry project “embracing text and colour, space and time, handwriting, composition, abstraction, illustration, sound, mess and motion, [to affirm] the possibilities of the page, the voice and the pen in a computer age”. The text to ‘Chimp’ begins and ends in the same place, albeit coloured and altered by the journey it takes, at once cryptic and yet as vivid as a lucid, salutary dream. Dramm sings, her voice slender, but steely, soaring and swooping. “Born too late to explore the world… born too early to explore the universe… born just in time for this”. Her treated violin progresses at a steady, measured, plotted pace, almost Brian Wilson-like, before being lost in an ethereal sweep, like a murmuration of electric swallows. The playful, inquisitive ‘Horse’ follows, the mood light and taunting, borne on pizzicato strings. What is the horse in this context? Certainly not a mere means of transport. Is this an interrogation of privilege, or something more elusive? The detail is intimate, zooming in on the very scrape of the fretboard, yet the scale is vast – distant voices on the horizon, a tornado of abstract sound. ‘Voices’ takes place against multiple, inchoate layers of chatter, as if all the voices of all your other selves in parallel universes were being broadcast at once. Dramm presents the enigmatic text with the illustrative clarity of a PowerPoint presentation. ‘Jungle’ follows, a David Tudor-esque rainforest interlude of silvery precipitation and birdsong. Once again, there’s a sense of being abruptly transported to another landscape, another context, realised with crystal clarity in sound, texture, detail. And then we reach the simian motif at the heart of the album. First, ‘Chimp Is Who’, is at once both cryptic yet vivid. ‘Gorilla, CEO’ is then delivered with stark urgency amid the frantic sawing of strings as the scene shifts, with dream logic, and we contemplate the Alpha creature at the heart of the verse. “Imagine being the muscular/thinks the air stewardess”.

We proceed with another interlude, ‘Bonobo’s On Time’, run through with the rapid pulse of processed strings like the thread that runs through the narrative of the album, before the obliquely gripping ‘Orangut, The Orangutan’ (“hold your eyes covered/monkey screams it’s not real”). We wing back full circle with a reprise, ‘More Voices’, whose disquieting babble merges into ‘Ways’, bringing us close up to the very vibration of the violin string, its final lines landing like an epiphany, faintly reminiscent of Wim Wenders’ Wings Of Desire: “The angel sat upon our shoulders, a whole lifetime/only heard when, at the end, it extends its wing”. The penultimate track “12 Wings” is a sort of verbal remix of the opening track, its reflections on self-pity and entitlement subtly modified against a backdrop of shifting sonic matter that is at once primordial and futuristic. Textually and texturally, ‘Chimp’ is an experience like no other, a journey around its own world that you’ll feel compelled to take again and again.

Diamanda La Berge Dramm was born in Amsterdam in 1991 and began playing the violin at the age of four. Having grown up in the Netherlands among the leading figures of the Dutch classical, avant-garde and improvisational music scenes, she incorporates all of these influences into her own concerts. She studied at The New England Conservatory and The Royal Conservatory of The Hague.

In April 2018, Diamanda became the first string soloist to win the Dutch Classical Talent Tour & Award. Other awards include the John Cage Award, the Nicolai Prize, the Kersjes Violin Award, and the Deutschlandfunk Förderungspreis.

In 2018, together with Garth Knox, she released the Violin Spaces series: a brand new set of concert etudes focusing on extended techniques. Diamanda teaches these techniques in her international masterclasses. Her longtime collaboration with UK poet SJ Fowler resulted in the EP ‘Beastings’ in 2019. As part of her residency at the Muziekgebouw Eindhoven, Diamanda created a project around Charles Ives’ Violin Sonata, No. 5, which included a CD and a corresponding website.

2021 saw the release of the album ‘Inside Out’ on GENUIN Classics, with works by J.S. Bach and John Cage. As one of the founders of Splendor Amsterdam, she regularly gives and hosts concerts there. Diamanda is Artist in Residence with Crash Ensemble for the upcoming two years.