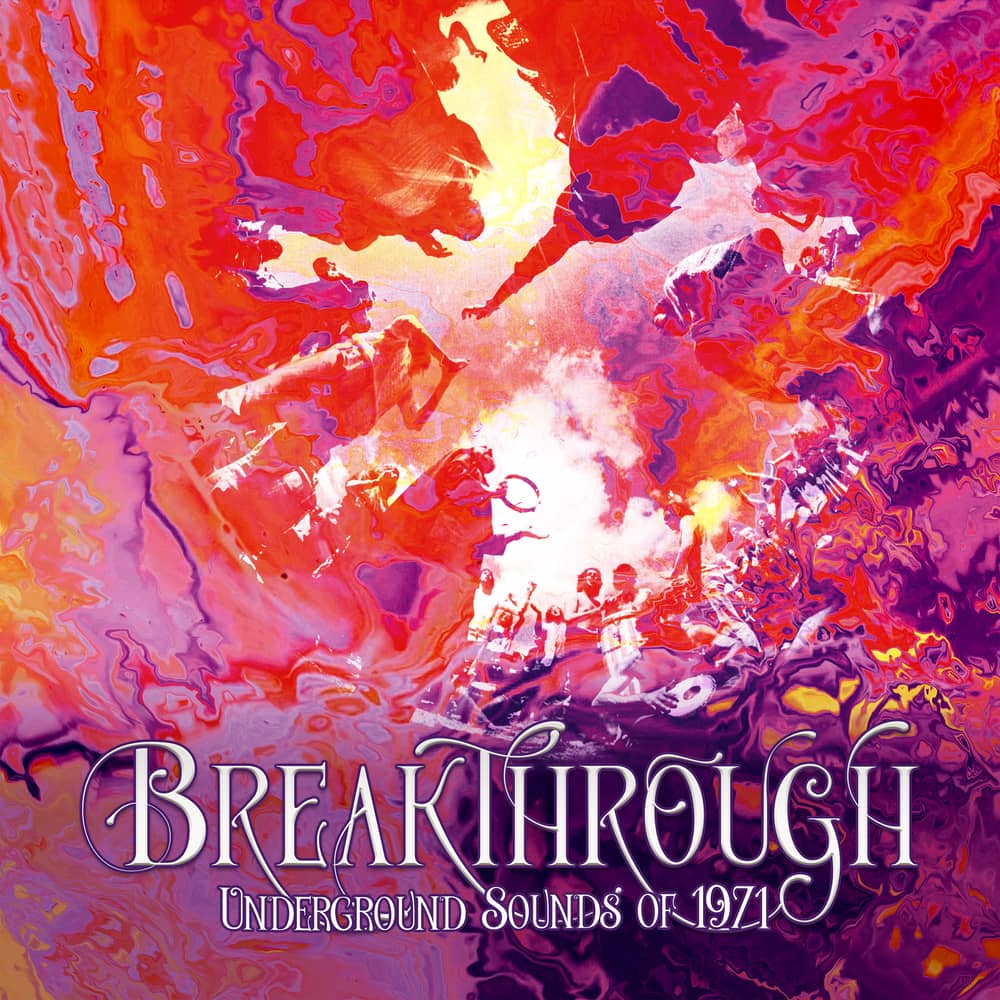 The year 1971 is celebrated in a lush anniversary four CD box set from Esoteric Records via Cherry Red.

That time saw vinyl albums emerging as serious market product, though I find it hard to agree with Mr. Powell’s booklet opinion that it was “the dominating force” (a few of this wide selection were singles anyway). The year certainly was one of the heydays of hard rock, jazz rock, space rock, folk rock and blues rock, indeed most genres “hardened” as equipment for stage and studio developed. They were misguidedly lumped together at the time as “Progressive”, at least by some journalists. Apart from that term’s truer meaning, well-reflected here, the various new styles were simply developments, some more natural than others.

What we have here is rock in its appropriate geological time-strata. Singles were still considered important, though many pretended they weren’t when tending to see them as somehow limiting or not serious, and in some cases even throw away (Hawkwind used to sing their one hit as ‘Washing’, not ‘Silver Machine’; fortunately their classic ‘Master Of The Universe’ is preferred here). Such opinions were reserved for interviews or stage banter with fans, but not to the record labels. Either way, such representatives of alternative culture had a say, aided by music papers that overflowed into a lifestyle press such as Frendz, Oz and IT (International Times) that was picked up by the daily “straight” press, especially on Sundays!

Established major labels created “specialist” outlets for the new bandwagon: Vertigo (Philips, well-represented here by half-dozen names), Deram (Decca), Harvest (EMI), Dawn (Pye), Neon (RCA) alongside pioneering independents such as Island, Chrysalis, Charisma, Track and Dandelion (oddly absent here, though the likes of Medicine Head, Tractor, Beau and Kevin Coyne certainly developed their genres). An expansion of venues coincided with festivals on a near-daily basis in good weather months, not only the inaugural Glastonbury Fayre that year soon dwarfed by the more honest Weeley Festival in Essex, plus the Oval concert in aid of Bangladesh and free series at Hyde Park.

Even the BBC had to unstiffen just a tad to participate, recording countless sessions encouraging universities etc. and pubs to expand their horizons and budgets to include music as social events. However, though started in January 1964, the BBC didn’t think to record each show of its flagship Top Of The Pops until…1976! Over 3,000 from the ’60s alone were wiped. But this compilation also peeps around the corner of the block to the future. In that year was the Black Sabbath Paranoid Tour, while proto-punks are here represented by Pink Fairies (their single ‘Do It’) and Edgar Broughton Band (‘Call Me A Liar’; ‘Evening Over Rooftops’) as the “hairy fairy” 60s felt a colder wind blow.

This handsome 4CD boxset seemingly seeks to show something like progressive music coming of age (before it was called prog and became an umbrella term), hence the compilation title taken from one of Atomic Rooster’s two tracks from In Hearing of Atomic Rooster. In their prime they enjoyed not only a couple of hit singles but also LPs, despite their small label. Founder Vincent Crane from The Crazy World of Arthur Brown (he co-wrote ‘Fire!’) sensed a “credibility danger” if they had a third hit though later played in Dexy’s Midnight Runners before ending his life in 1989. In a limited sense, he and his band symbolize the brief period of the compilation’s focus: the assumed dichotomy between serious (albums) and frivolous (singles and Top of the Pops) which led to the breakups of such as T. Rex, Medicine Head and Free (though never underground, refusing to do free concerts for example). or else a completely different fanbase.

This excellent set is divided about equally by proggers i.e. those seen as such then and since: Yes, ELP, Barclay James Harvest, Caravan, Kingdom Come, Uriah Heep and Peter Hammill with and without VDGG; those who had chart hits and seen in an ambiguous position (at the time but not since) such as Procol Harum, ELO, Family, Jethro Tull, Traffic, Atomic Rooster and Curved Air, along with obscure then but collectable now e.g. several Vertigo label acts plus Spring, Samurai, Paladin, B.B. Blunder and Big Sleep. There’s a smattering of rockers such as Thin Lizzy, Pink Fairies, Stray, Status Quo, and Edgar Broughton Band plus some jammers (Man, Mighty Baby but no High Tide) and sprinkling of folkies too (Sandy Denny, Linda Hoyle, John Martyn, and the new to me Colin Scot). Other horses on their own courses include the superb Audience, Pretty Things, Lindisfarne, Help Yourself, Keef Hartley, even Jack Bruce with his Folk Song. Several of the famous have two entries which isn’t given to the obscurer alas.

This smorgasbord would have exploded anyone’s diet at the time, though declines (no doubt by necessity) to taste soundbites from abroad. It nevertheless paints a balanced fare set before an English music lover in that year, when over the wall in popland there was ‘My Sweet Lord’, ‘Maggie May’, ‘Brown Sugar’ and T. Rex “going electric” as Glam Rock strutted on its rather wobbly way. More adventurous music was to an extent epitomized by Audience, whose sophomore ‘The House On The Hill’ is here from their debut LP; its European success led to them being one of Charisma’s first signings. The quartet without electric guitar utilized jazz and other elements via sax and flute behind Howard Werth’s unique vocals. He was headhunted by The Doors to replace Morrison (Kevin Coyne was also called, but he thought it a prank and put the phone down) but when Werth got stateside they left him high and dry by not reforming, so he performed with Captain Beefheart’s Magic Band. Audience’s Marquee debut saw theatrical elements with celebrities in the crowd, followed by a US tour with The Faces and supports Led Zeppelin etc. Yet, they were always more feted abroad as when a later album reached #1 in Italy. Reunions continue into this century.

Another band still going today (albeit in more than one version) are the northerners Barclay James Harvest, one of EMI/Harvest’s first signings, from the ashes of The Blueskeepers and Wickeds. Again, their fusion of classical, rock and folk saw success mostly in Europe, where their LPs even go platinum thanks to a loyal fan base who are rewarded with prizes during tours whereas in the UK the band struggle to break the top twenty. Two tracks (not their most famous) are rightly selected here for a group who deserve to be better known. Not so much a “marmite” band as ELP or Yes, the latter also receiving two entries.

A variation on this schema is Arthur Brown, who started in Paris then London’s underground theatres until ‘Fire!’ was a #1 hit and its LP only one place lower. He preferred, however, the alternative world (at least once appearing as a nude guest on-stage and guest voice on LPs by such as the Pretty Things and Robert Calvert), concretized by a trio of superb avant-garde LP in the 1970s for Polydor which were recently reissued by Cherry Red Records (included here is a single from that period). In the ’80s he left to become a counsellor in Texas for a decade before returning to music sporadically thereafter.

The balanced mix of styles of the Vertigo contingent (the progressives Beggars Opera, Jade Warrior, Gentle Giant, Cressida—from their second LP which was their demise—to the jazz rock of Nucleus and straight rock of the unsung Patto) dovetail with a few other lesser-known acts such as the Leicester band Spring, whose lone LP on Neon was produced by Gus Dudgeon (Bowie, Elton John etc.) and supported the Velvet Underground’s UK tour. Ray Martinez left to join Gypsy and Pat Moran worked as a studio engineer with Iggy Pop, Robert Plant etc., while Dave ‘Pick’ Withers was founder drummer of Dire Straits. Samurai –omitted from the otherwise excellent 48 page alphabetical booklet—had roots in The Web in ’68 and short-lived Greenwich Gramophone Company (Deram and Decca respectively) then one LP as a big jazz rock outfit bedded in the Canterbury scene, a rich vein represented here by two tracks from Caravan.

Rising from the ashes of the equally legendary Blossom Toes, the progressive trio B.B. Blunder’s LP had such famous guests as Julie Driscoll and Brian Auger but along with two singles had no commercial success, folding the following year. The fruitfully creative South Wales music scene produced the now-renowned Eyes of Blue who blagged a recording contract from nascent Deram after winning a Melody Maker competition. They worked on a Quincy Jones film (The Toy Grabbers) then dispersed to other bands such as Man, Gentle Giant and Wild Turkey. Offered here is their only LP’s title track, Bluebell Wood.

Some classics of the period resurface: Jethro Tull’s ‘Life Is A Long Song’ from one of their best EPs; Traffic’s ‘Low Spark Of High-Heeled Boys’; Uriah Heep’s ‘July Morning’ and Status Quo’s powerful ‘Someone’s Learning’ from their classic ‘Dog Of Two Head’ LP among others, and some are absent. Fort example Family is here but not the Kinks, who were both pop and rock when changing labels in ’71, and as English as Harrods, vindaloo, and corned beef from near the Falkland Islands. Edgar Broughton’s ‘Hotel Room’ and the magical East of Eden who first planned to call themselves the Electric Light Orchestra in the ‘60s would have been appropriate too.

Of course, choices have to be made and sometimes not always for musical reasons, and moreover it was such a richly fertile period that there’s no such thing as right and wrong, just endless enjoyment from almost everything that was being produced. There are pleasant surprises galore. Lay back and take a slow blow of pure pleasure from this diverse treat.