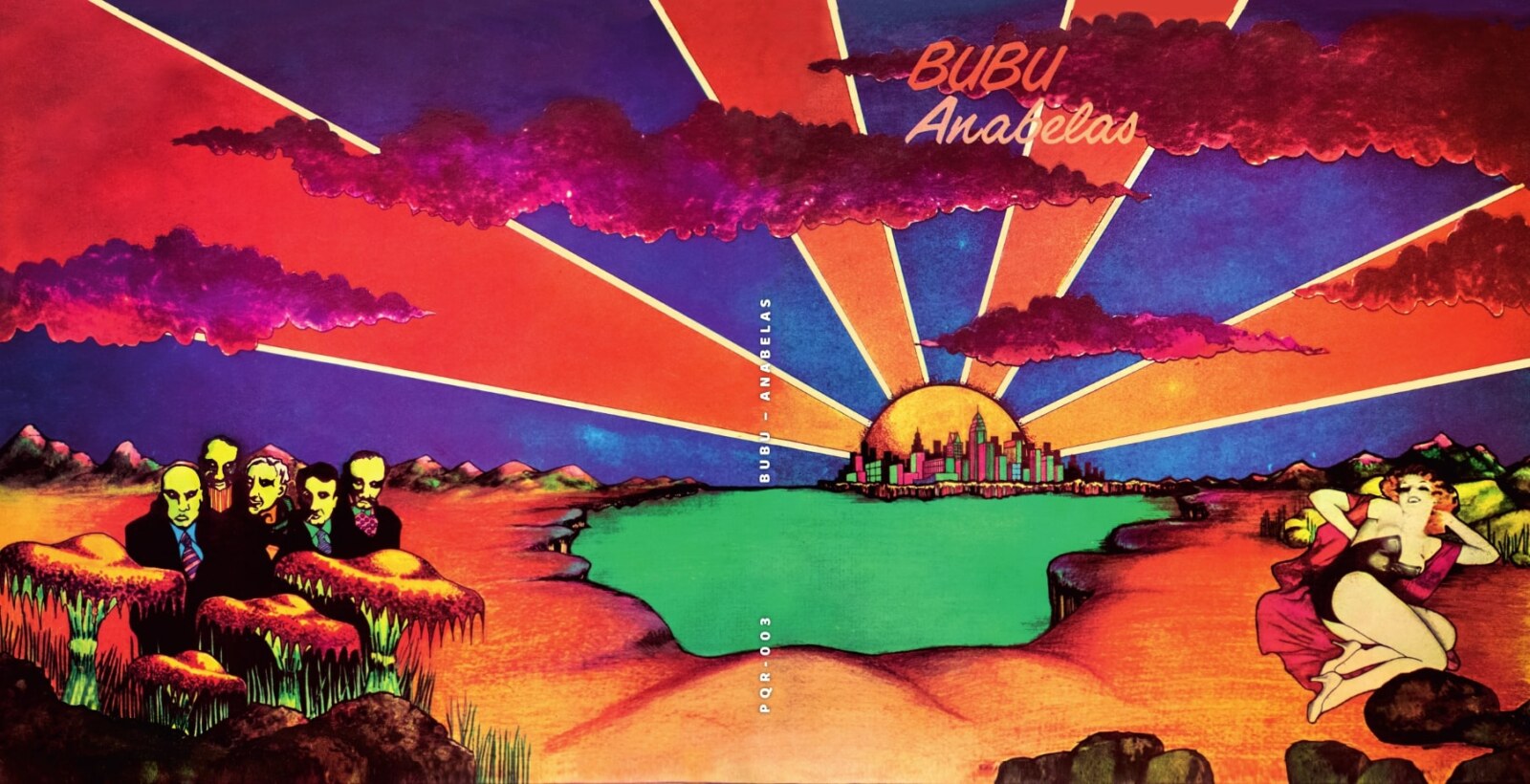 The origins of Bubu date back to the beginning of 1973, a period of intense creative fermentation that was driven by the avant-garde ideal of the renowned Di Tella Institute in Buenos Aires, Argentina, a hallmark in literature, theater, plastic arts, and the progressive side of rock music.

The early band formation featured Carlos Noel Reyes, nick-named “Noelito”, violinist, and luthier, great-nephew of poet and Nobel Prize winner Pablo Neruda, Jorge “Monín” Liechtenstein (later in Orion’s Beethoven) on drums, and Daniel Andreoli on bass. Shortly thereafter, guitarist Sergio Blostein, an experienced performer initially with Nervio Trío and later with Zapenledomun (1969-1972), and flutist Ricardo La Civita joined the band, and expanded its musical horizon to new possibilities. Some of these musicians were already studying orchestration at the National Conservatory of Music, in tandem with their secondary education studies. At the same time, one more member joined Bubu, Guillermo “Wim” Forstmann on saxophone. This initial line-up that was named Zion, featured Daniel Andreoli on bass, Wim Forstmann on tenor sax, Ricardo La Civita on transverse flute, Carlos Noel Reyes on violin, Jorge Liechtenstein on drums and Sergio Blostein on guitar (also responsible for the arrangement of the song Cortejo de un día Amarillo). They started out as an instrumental group, without vocals. From the very beginning, Andreoli and Forstmann emerged as band leaders, the former being in charge of the music, while the latter being responsible for the lyrics. 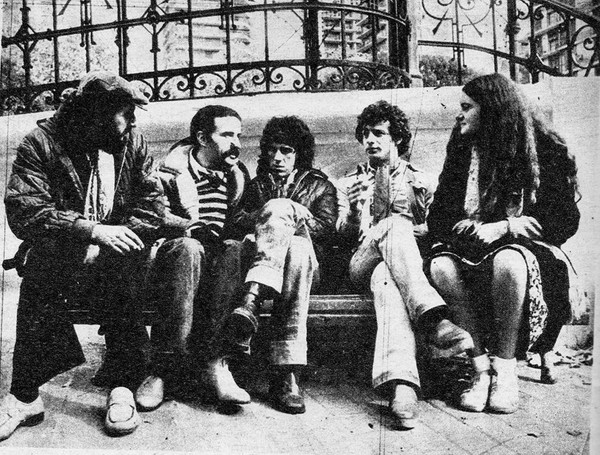 George Rossolatos of PQR- Disques plusqueréel says about the reissue: “‘Anabelas’ is a truly remarkable oeuvre to be cherished by collectors who have been kept at a distance in the face of the astronomical prices that are demanded for original copies, inasmuch as by newer cohorts in the prog/avant-garde milieu. With so many flavors parading synesthetically in an ethereal escapade where even the lyrics give in to an overflowing multi-instrumentalist interplay that disrupts semantics in favor of the mood of the utterance, ‘Anabelas’ is equally appealing to the most trained ears to the sonic vicissitudes of Italian prog, inasmuch as to fans of the avant-hard electronics of Add N to X. And there is one more important reason why the rebirth of ‘Anabelas’ is even more appealing than the original release: the exclusive bonus CD, featuring recordings from two seminal and highly acclaimed live-shows that were performed by Bubu“.

“The idea was to give a group that makes complex and eclectic music a silly name, to differentiate ourselves from other groups that gave themselves serious names, but made silly music.”

Daniel Andreoli: From an early age (5 years) a strong inclination towards music was evident. Without going into details, I participated in all the events that were organized at school, the neighborhood or wherever I was. In my early adolescence, already in the last year of elementary school, I began hanging out with other musicians, with whom I listened to and played songs by the likes of The Beatles, The Rolling Stones, The Doors. I started playing bass which gave me an overview of the instruments that are performed in a group. Gradually, I moved on to King Crimson (‘Lizard’ / ‘Islands’), Genesis, Emerson Lake and Palmer, Arnold Schonberg, Oliver Messiaen, Stravinsky, among others.

Daniel Andreoli: The first band was formed by friends. ‘El Cortejo de un Día Amarillo’ was written at that time, the first song on side A of ‘Anabelas’, arranged by Sergio Blostein, then a guitarist who was later replaced by Eduardo Rogatti. I received a scholarship at the Collegium Musicum where I finished composing ‘Anabelas’, leaving my place as bass player to Edgardo Folino. Polo Corbella (drums) took the place of Jorge Liechtenstein; Cecilia Tenconi (flutes) replaced Ricardo Lacivita; Sergio Polizzi (violin) replaced Noel Reyes; Miguel Zabaleta joined in as the main singer, and the choir was directed by Daniel Zucker. The last addition to this early line-up was Wim Forstmann (sax) who became the band’s leader.

How did you decide to use the name “Bubu”?

Wim Forstmann: At first we had the idea that the music we made was a little different from the rest of the groups that worked in our milieu; it featured arrangements, it was complex to play and listen to, we had to rehearse for a long time to achieve an acceptable level. The idea was to give a group that makes complex and eclectic music a silly name, to differentiate ourselves from other groups that gave themselves serious names, but made silly music.

What else influenced the band’s sound?

Daniel Andreoli: The origin of each instrumentalist: the saxophonist was influenced by John Coltrane, adding free jazz to our compositions, the flutist was part of contemporary groups and amazed us with new sounds; unconventional, the violinist was part of the National Symphony where he became a concertino and had a magnificent career. The bass guitarist and the drummer were recognized interpreters in the field of popular music. Unfortunately all three died at a very young age. Finally, the singer, a fan of Peter Gabriel, brought a lot of creativity to the group.

I found it extremely interesting that stylistically you were very close Italian prog bands. We can even trace a few elements from the Zeuhl genre. I’m guessing this is a coincidence, since it must have been really difficult to get records from abroad back then and this is just the result of your complexity?

Daniel Andreoli: As such, it is pure coincidence. This remark has been made repeatedly, however I did not have access to Italian bands until the advent of the internet, and I admit that I identified with the Italian prog sound at the moment I listened to them.

How did you get signed to EMI?

Daniel Andreoli: A week after our first concert, almost all of the record labels in Argentina approached us, and we ended up signing with EMI; I think there was a certain friendship with a producer.

You were the band’s main arranger. How did you approach composing?

Daniel Andreoli: At the time I was transcribing Bubu’s songs to sheet music I was still not sufficiently trained to do so. Sergio Blostein arranged the first song of ‘Anabelas’ (‘El Cortejo de un Dia Amarillo’). Immediately afterwards I was awarded a scholarship at the Collegium Musicum, and I managed to continue with the rest of the material (necessity rules).

What’s the story behind your debut from 1978?

Tremendously nervous, my teachers and partners from Collegium, parents and friends were present all along, so my legs were shaking, it was great. For the first time, the newspaper with the largest circulation in the country dedicated an entire page to Rock music with an excellent review.

What kind of equipment did you use and who was the producer?

Daniel Andreoli: I think it was a 16 channel analog Tascam console.

Daniel Andreoli: My colleagues put together some stories about it, but for me it was pure inspiration. 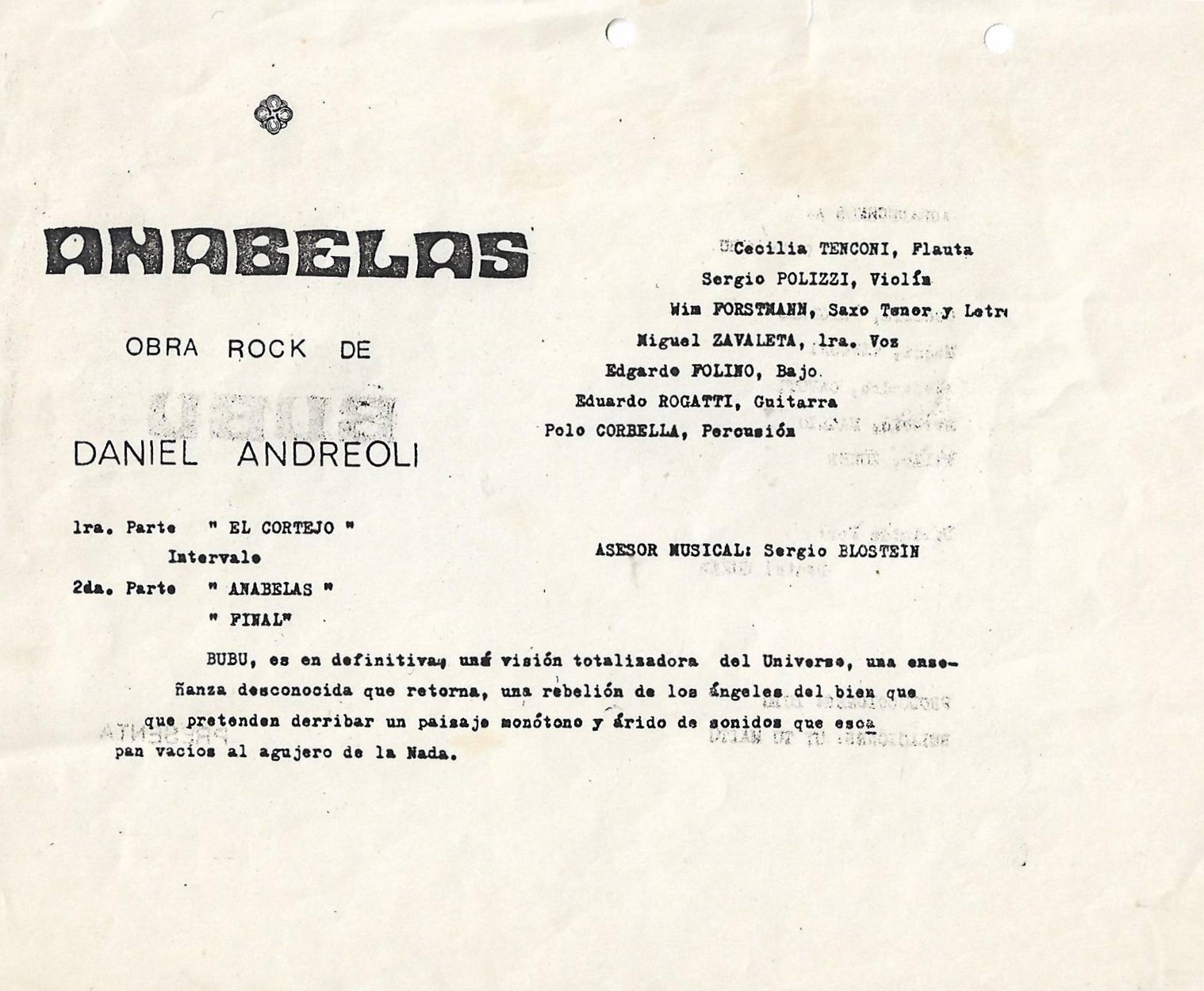 ‘Anabelas’ is considered by many as Argentina’s finest progressive rock album. The complexity of the album is extraordinary. What do you think was the main difference between you and other bands from your country?

Daniel Andreoli: I don’t know, but when we played we saw the most prominent musicians, art critics and journalists in our field sitting in the front row. 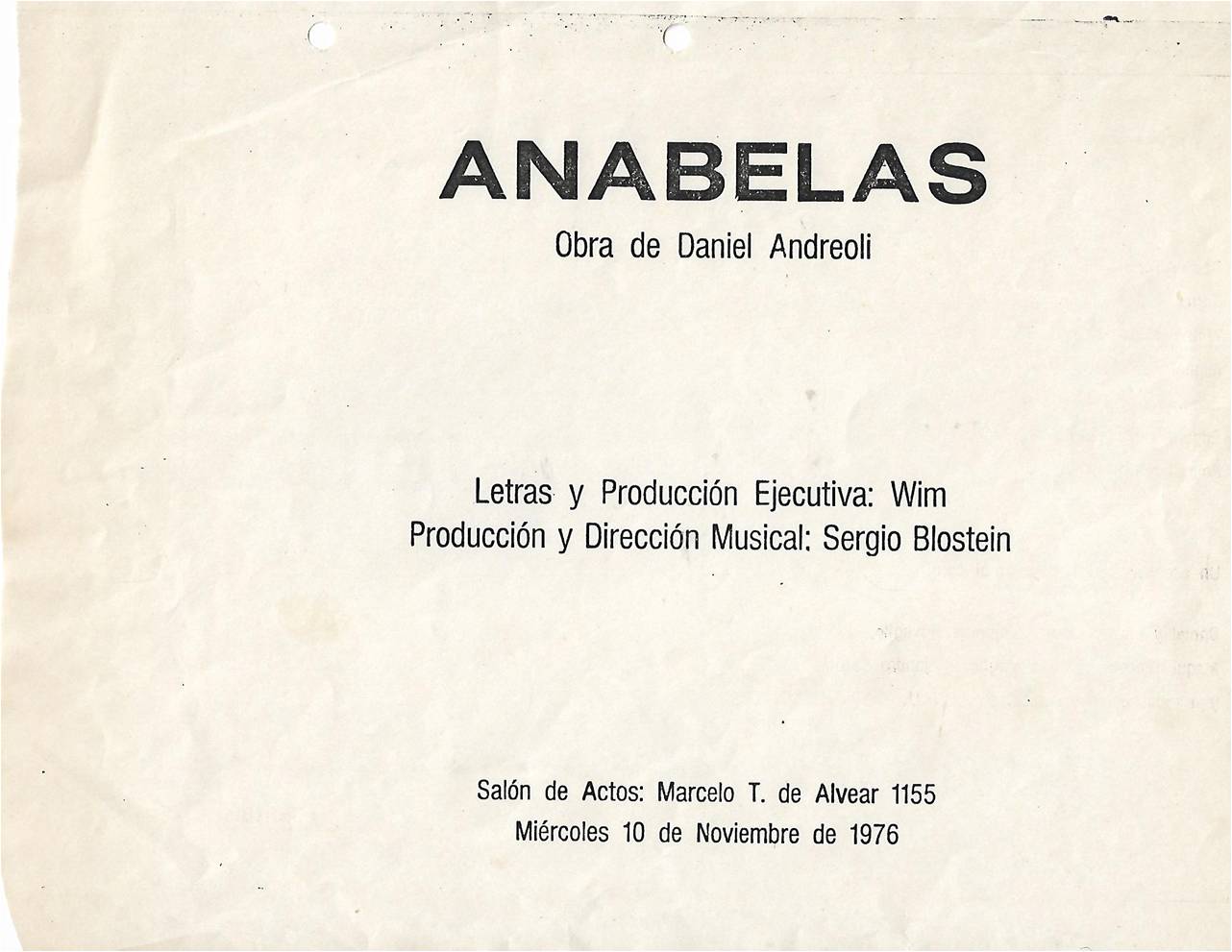 PQR-Disquesplusqueréel released a very special reissue of your album. Are you excited about it? What can you say about the reissuing process?

Daniel Andreoli: It was very neat and smooth. George Rossolatos (founder and owner of PQR-Disques plusqueréel) led the process seriously and complied with the agreed deadlines, as well as Felipe Surkan (record producer and owner of Viajero Inmovil) did his part correctly. 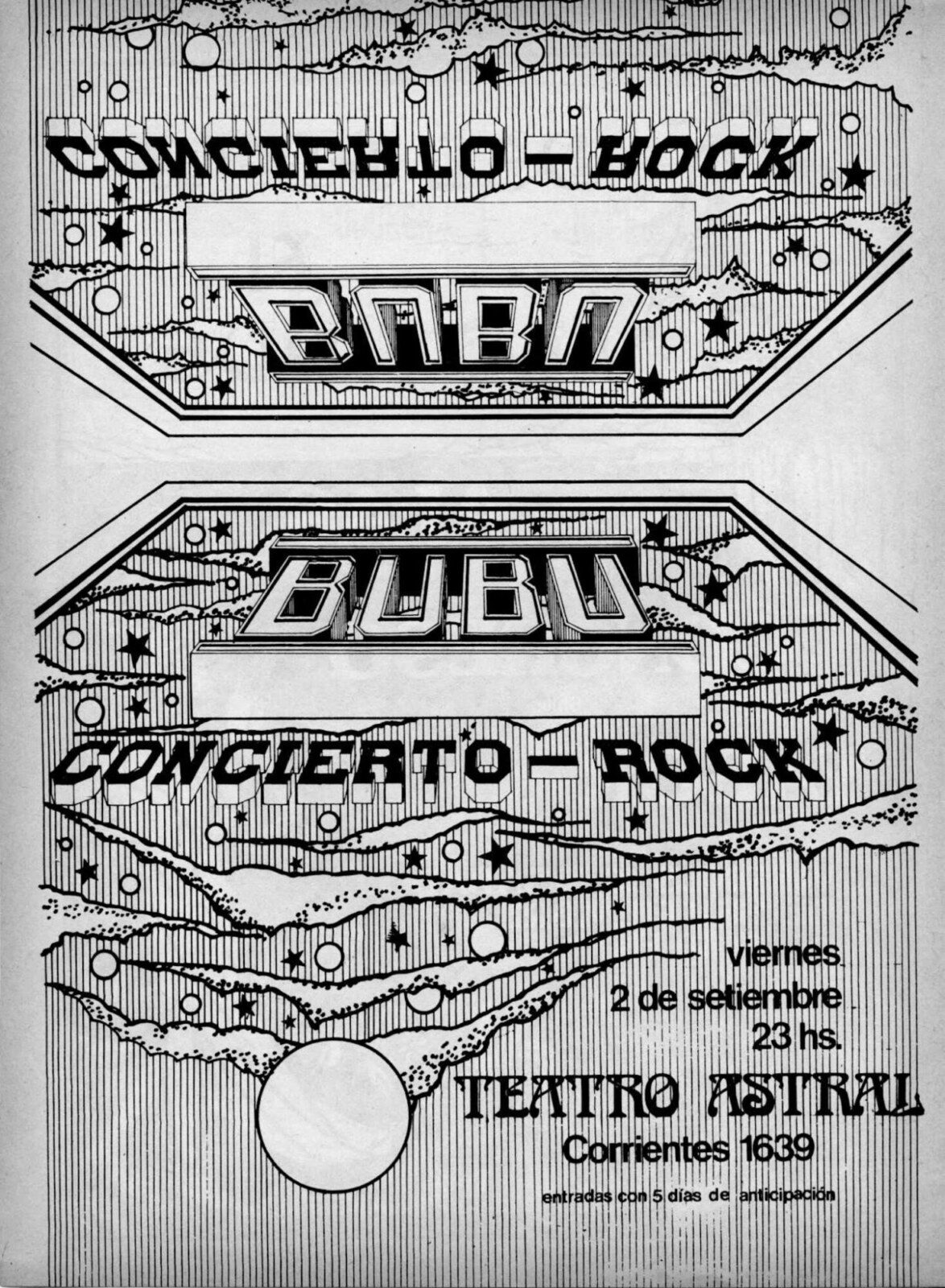 Looking back, how do you see the Argentinian rock scene of the 60s and 70s?

Daniel Andreoli: Incredibly beautiful, perhaps because I associate it with my adolescence, but I still consider the music, cinema, plastic arts and literature of that time full of an aesthetic sense of freedom and freshness, as I’ve never lived again.

Daniel Andreoli: South America was plunged under dictatorial regimes, and those of us who gathered young people in their shows were frowned upon. I rejoined Bubu on bass for our last show where a very unpleasant situation occurred: the Luna Park, a stadium of about 15,000 capacity, was surrounded by assault cars, and as we were playing we saw the police arresting people in the last row of seats. The same night, three people in civilian clothes went to my parents’ house and told my father that I could not continue giving live performances. With the album just released and the help of my sister, I got a one-way ticket to the Netherlands where I spent 18 months, working for a theater company, Praxis, that was directed by the Uruguayan Juan Carlos Tajes. It was a great experience because it allowed me to visit Europe. During my stay, I spent a month in Milan at the home of some friendly musicians. It was there that I understood why they associated my music to that of Italian bands.

It took 40 years to write your follow-up album, ‘El eco del sol’. How did the story evolve?

Daniel Andreoli: It seems like an eternity, but when the theater curtain was drawn, I felt like the same boy as the first time that I stepped onto a stage.The last eight years, since I turned sixty, life has been giving me the reward of having kept my dreams intact, since I met this group of millennials who accompanied me at Eco del sol and I hope you will soon do so in what I consider will be my last album. 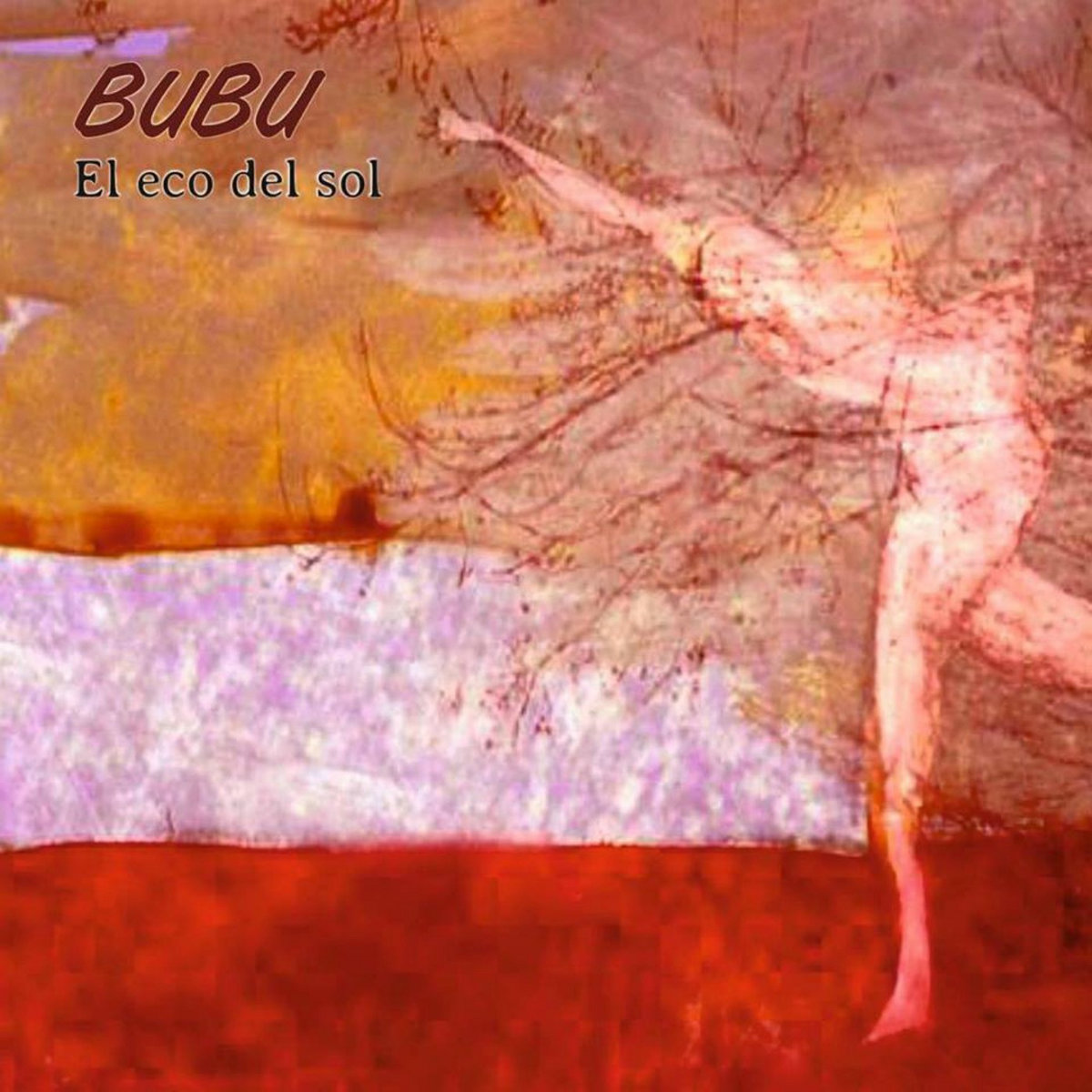 And the album sounds like nothing happened in-between. You are all in top shape.

Daniel Andreoli: In total, we did ten performances in a full concert hall. Tickets were sold out as soon as we announced their availability. The same happened with the CD. 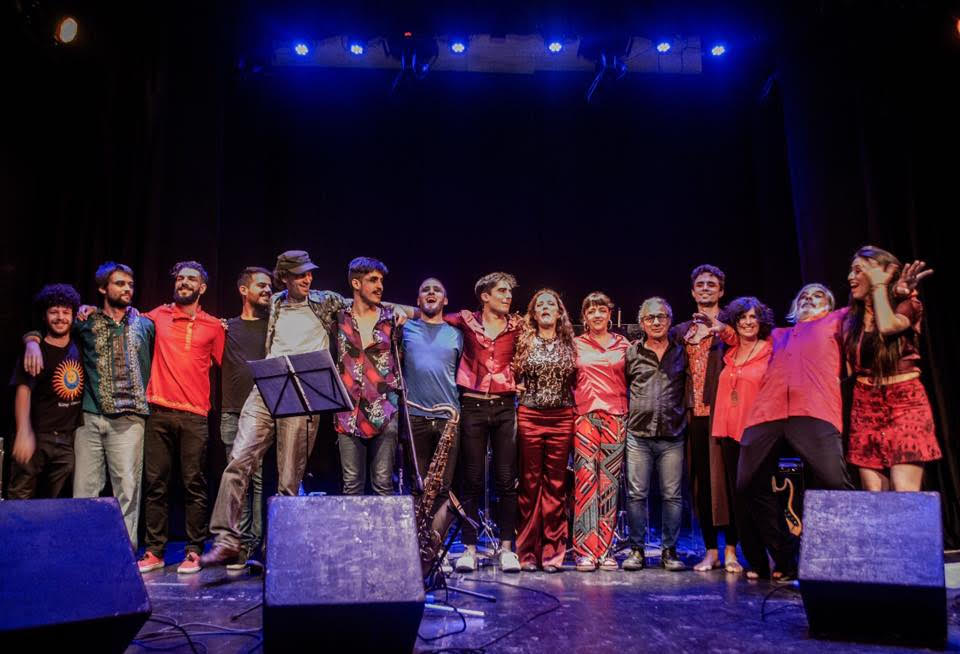 Are you currently working on something new?

Daniel Andreoli: Yes, there will be a third album by Bubu. In the near future I will write more about it.