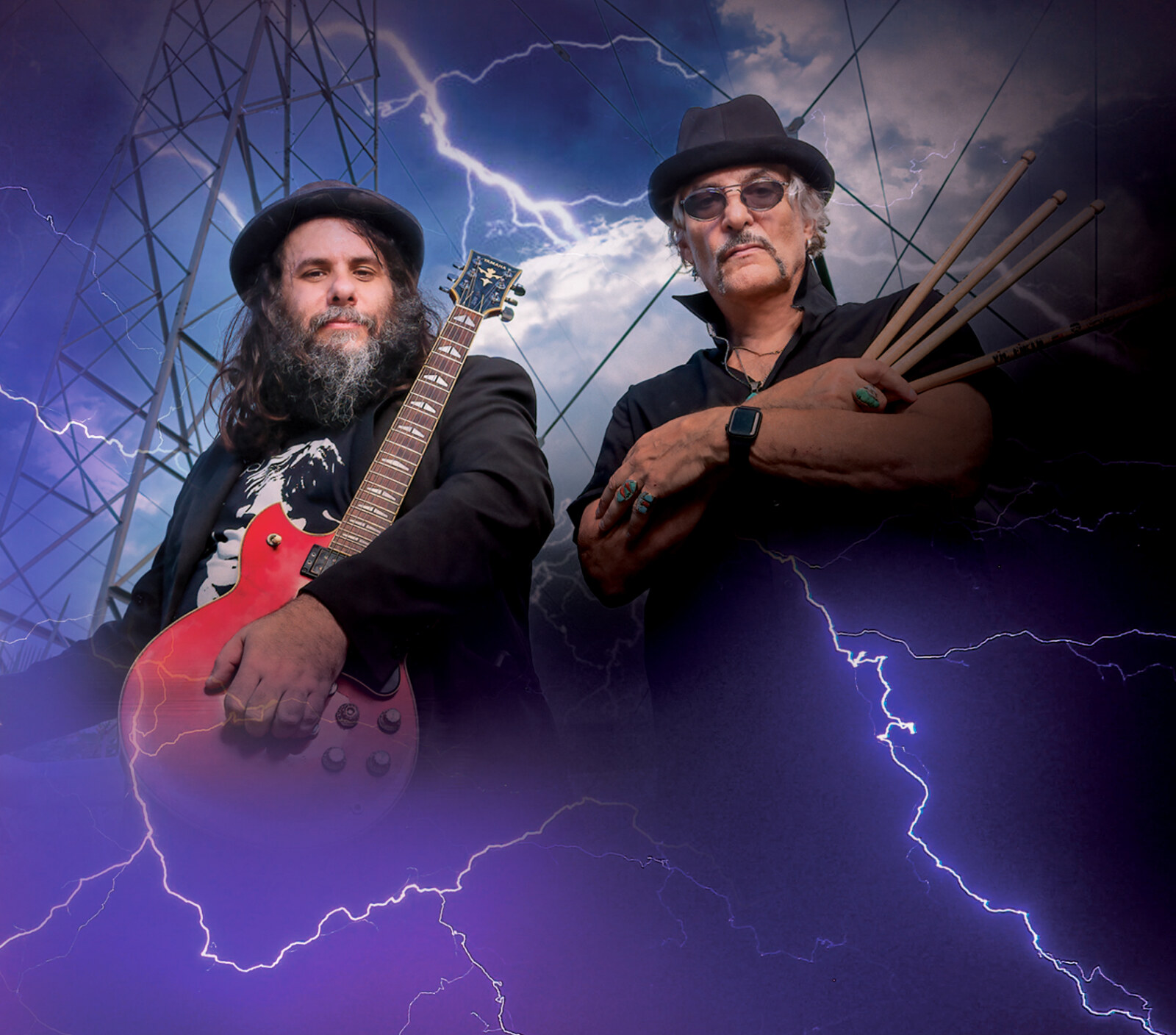 Their album, ‘Energy Overload’ was released September 24, 2021 via Cleopatra Records. Carmine Appice is best known for co-founding Vanilla Fudge, Cactus and King Kobra. As a drummer and composer, he has worked extensively with Ozzy Osbourne, Rod Stewart and Ted Nugent. Fernando Perdomo, the son of Cuban immigrants, quickly launched a successful career as a multi-instrumentalist, producer, and session musician upon moving to Los Angeles in 2012. He was recently featured in the film ‘Echo in the Canyon’, where he recorded and performed with Eric Clapton, Brian Wilson, Jakob Dylan and many others. 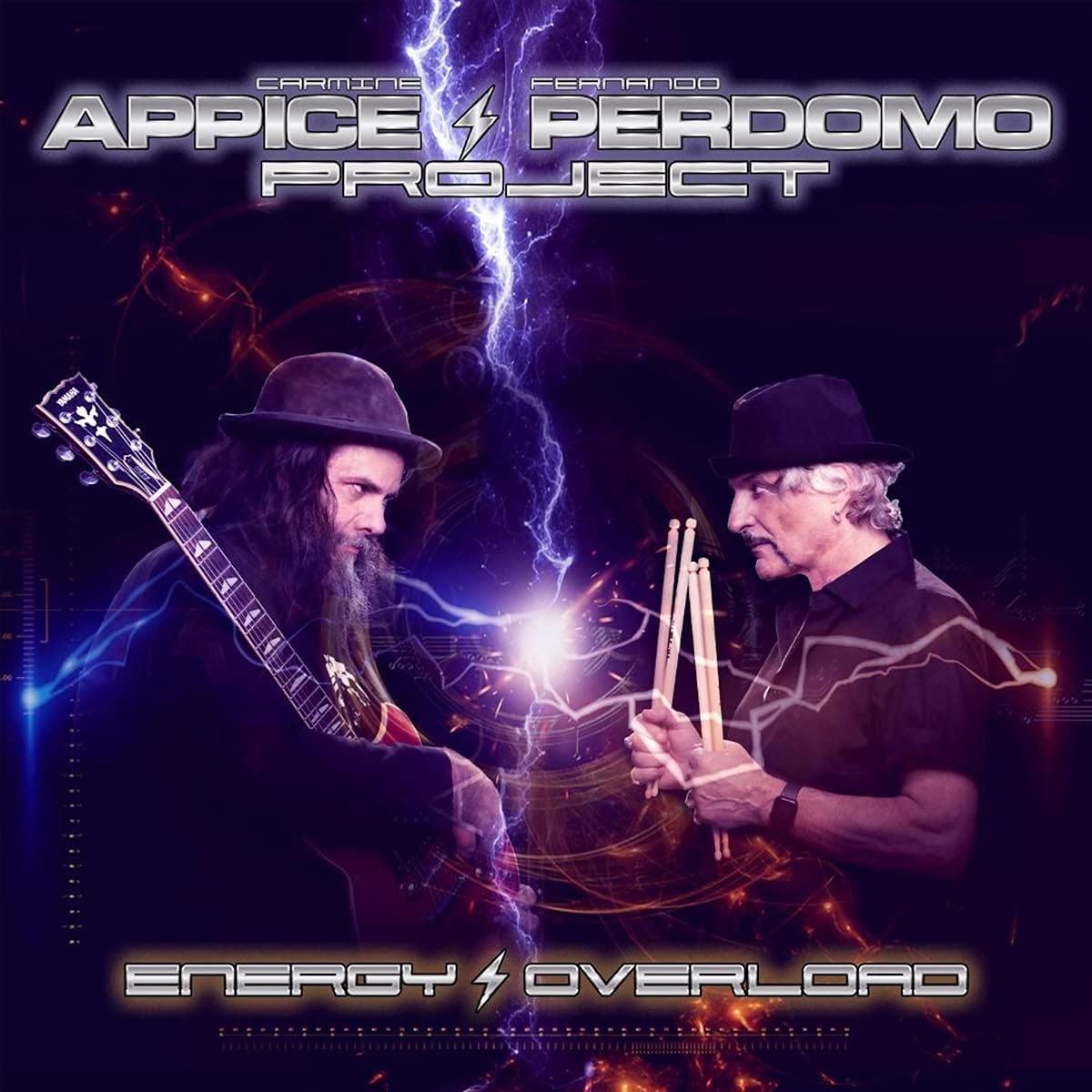 “The energy between us never stopped”

Carmine Appice: Luckily I moved to Florida during the pandemic. My new home has a studio in it, so I spent all year working on new projects. ‘Tightrope’ by Cactus and ‘Stop in the Name of Love’ with Vanilla Fudge. It’s a new single. I also worked on three bonus tracks for my ‘The Definitive Carmine Apice’s Guitar Zeus’ box set plus on videos that will be out in November… and of course ‘Energy Overload’. But no shows!

Your new album, ‘Energy Overload’ was recorded during lockdown. What was the original idea behind it? How happy are you with the result?

We had no idea at the beginning . I met Fernando through Dana, Tom Dowd’s daughter. She said he wanted me to play on a couple of tracks for a project he was doing. Considering my studio was just born, I needed a project to get me to learn how to use it and develop my drum sound in the studio. So after talking to Fernando, I sent him an instrumental song I wrote on my iPad for him to send me stems to record my drums to. So, when I got it back, I did the drums and it came out great. That was the song ‘Thunder’. Then we just kept sending stems back and forth. Eventually we recorded 18 songs.

The results were awesome. Fernando can play anything and really well. I sent a friend the song ‘Flower Child’. She thought it was Jeff Beck. And she is a well known artist in her own right. So there you have it… great results.

Can you share some further details on how it was recorded? What was the energy between you and Fernando Perdomo?

As I said, we started sending stems back and forth. Sometimes he would send stems he wrote and after I played them, I added more to it. Like ‘Little Havana, Big Havana’. He sent me the stems, I played it then added a completely different drum part at the end. Very fast double bass shuffle with accents et cetera. Then he wrote music to fit that. That became ‘Little Havana, Big Havana’. We just played and had fun. The energy between us never stopped. It is still going on as we are six songs deep into album number two.

It is all different and with whom I’m making the music. With Rod Stewart… he worked from demos you create and rehearsed them until we came up with arrangements we all liked. In Vanilla Fudge it was Mark Stein who usually started an arrangement then the band finished it. In Cactus we jam riffs and write songs as we go along. In APP (The Appice Perdomo Project) we all did differently. Sometimes I gave him just a drum track with dynamics and groove. He would write on top of it… that was interesting.

All my collaborations warm my heart or I would not do them. Cactus, ‘Guitar Zeus’, latest Vanilla Fudge tribute to Tim Bogert, Beck, Bogert & Appice Live in 1974 that will come out at some point, new King Kobra still warms my heart… I love the ‘Energy Overload’ album. We did ​it ​because it was all fresh ideas and with Fernando playing gtr bass and keys it was easy for us. Playing with Jeff and Rod would warm my heart.

Buddy Rich and Gene Krupa were my main influences. They brought the drums out front as what I wanted to do in rock. Also Mahavishnu Orchestra. They turned me on to the progressive jazz rock I loved. Billy Cobham was amazing in that band.

As far as my style, I think I developed my own because I play technical hard and loud. The hard and loud came from playing loud rock music with no good sound systems live. To be heard I had to pound my way through a show… I was the first to play that hard of the 1967 drummers who came out like Mitch Mitchel, Ginger Baker, Keith Moon and Dino Donelli.

Well. As I said I went through all the classic books and studied through my teen years. So I had good technical skills. But then loud rock became part of my career with Vanilla Fudge. So I had to pound harder while playing technical. But I was always looking for new ideas. I came up with oversized big drums for volume. Bigger was louder. Bigger meant playing harder. So it was harder to be technical playing louder. But I worked it out. I wrote Ultimate Realistic Rock Drum Method, my successful drum book. I had a teaching studio in which I came up with a lot of new ideas to teach and do at clinics. All this helped me get better. I was the first rock drummer to do clinics. From my studio I came up with many new drumming concepts for single and double bass back then. Now like everything else the double bass players are amazing…

“All my bands improvise”

It’s the whole ballgame. That is why it is hard for me to do videos to a track because I always improvise. All my bands improvise. That makes our show interesting each night because it’s different. You don’t get bored playing the same. Even Rod Stewart improvised each night. I’ve seen bands that play note for note the same each night…to me that is so boring, no experimentation at all. Same each night as was in the studio…

Would you mind if we talk about Vanilla Fudge? What are some of the most cherished memories from working on Vanilla Fudge albums in the psychedelic 60s?

​The Ed Sullivan Show was amazing. Two times and millions of people watching​.​ Playing with The Who in the UK. Then seeing reviews… We blew them off the stage. Seeing our first album go to #4 on the charts with The Beatles and Stones ahead of us. Too many to talk about. All I can say is The Fudge did many firsts. The biz was virgin to many things back then and we were cutting edge. We even were in the Billboard Awards when it was only a page in Billboard. The magazine came in 1968 or 69. We were #2 for best vocals. #1 was The Beatles. That was amazing!

How did the double bass drum come into the story?

I loved Louie Bellson but as a kid I couldn’t only afford one plus I sang and would need a boom mic stand too. So I never did it. But when Fudge made it, Ludwig asked what I wanted. I got two oversized bass drums since I always brought one 26” bass drum into rock. Then I figured I would get everything oversized and that should be a loud big sounding kit. Plus it was the first maple finish kit Ludwig ever made. That started a fade in rock drumming 26 inch bass drums!! Big toms!! Big snare drums!! That’s what happened. Then I started developing double bass techniques.

Were you inspired by psychoactive substances like LSD back then? Did the substances have any impact on your music? Did they trigger experimenting with sounds?

No, we never really did that. We smoked pot. The pot and The Beatles’ ‘Revolver’ record did that for us. We created our whole first Vanilla Fudge album like that. And most albums in 60s -70s like that. No acid!!

“Cactus was a band to reckon with, both live and on record!”

I’m also a huge fan of Cactus! The debut album is one of the best hard rock / blues records of all time. What do you recall from the sessions?

Originally it was supposed to be me, Tim, Jeff Beck and Rod Stewart. Rod didn’t want to work with Jeff then Jeff had a car wreck so the Cactus that came out was plan nr. 2. All those songs were done live in the studio in Long Island… I wasn’t a blues fan… so I didn’t know ‘Parchman Farm’ was an old blues song. It could have been an original because the track was original. Les Paul’s son Gene Paul mixed it at Atlantic Records studio in NYC. Cactus was a druggie band, but not me. The rest of the band and our audience…cocaine was the drug of choice for both. I do know that Van Halen were big Cactus fans. I have tapes of them playing Cactus songs at their live gigs. The track ‘Eruption’ originated from Cactus song ‘Let Me Swim’. It was from the intro of that song. You can hear the similarity if you put them side by side. Cactus was a band to reckon with, both live and on record!

What’s the current status of Vanilla Fudge? Your latest album was released in 2015. As of 2019, Vanilla Fudge was still performing concerts regularly…

We just released a single . It is the last recording Tim Bogert did before he passed away. It is Supreme’s song ‘Stop in the Name of Love’.

We are still performing… We have shows coming up in October and November. Let’s see if they get canceled due to Covid. The band sounds great. You must listen to the new video. This is considered closing the book on the original Fudge. We opened the book with ‘You Keep Me Hangin” by Supremes and we are closing it with ‘Stop in the Name of Love’. That’s the end of recordings with 4 original members.

Gig at the Isle of Wight Festival with Cactus for 600,000 plus people was truly incredible… Hanging with Jimi Hendrix everyday. I remember playing the gig when Rusty, our singer, told the crowd, “Get up and boogie!”… It looked like a giant wave of people… truly amazing.

After that one was the Atlanta International Pop Festival, same thing, but 250,00 people.

And the Rod Stewart UK gigs, where we would stop at any given point and the audience would sing the rest of the song.

I’m also proud to be on The Ed Sullivan show two times, having Led Zeppelin opening for us. The Coke commercial with Jeff Beck playing guitar was also really cool.

And of course, ‘You Keep Me Hangin”. It introduced us to a new audience when it appeared in Quentin Tarantino’s latest movie; Once Upon a Time… In Hollywood.

​I’d like to thank all the fans, young and old that still supported me all these years. I love you all. Without you I couldn’t do this. So have a great life, be safe and try to stay healthy today.