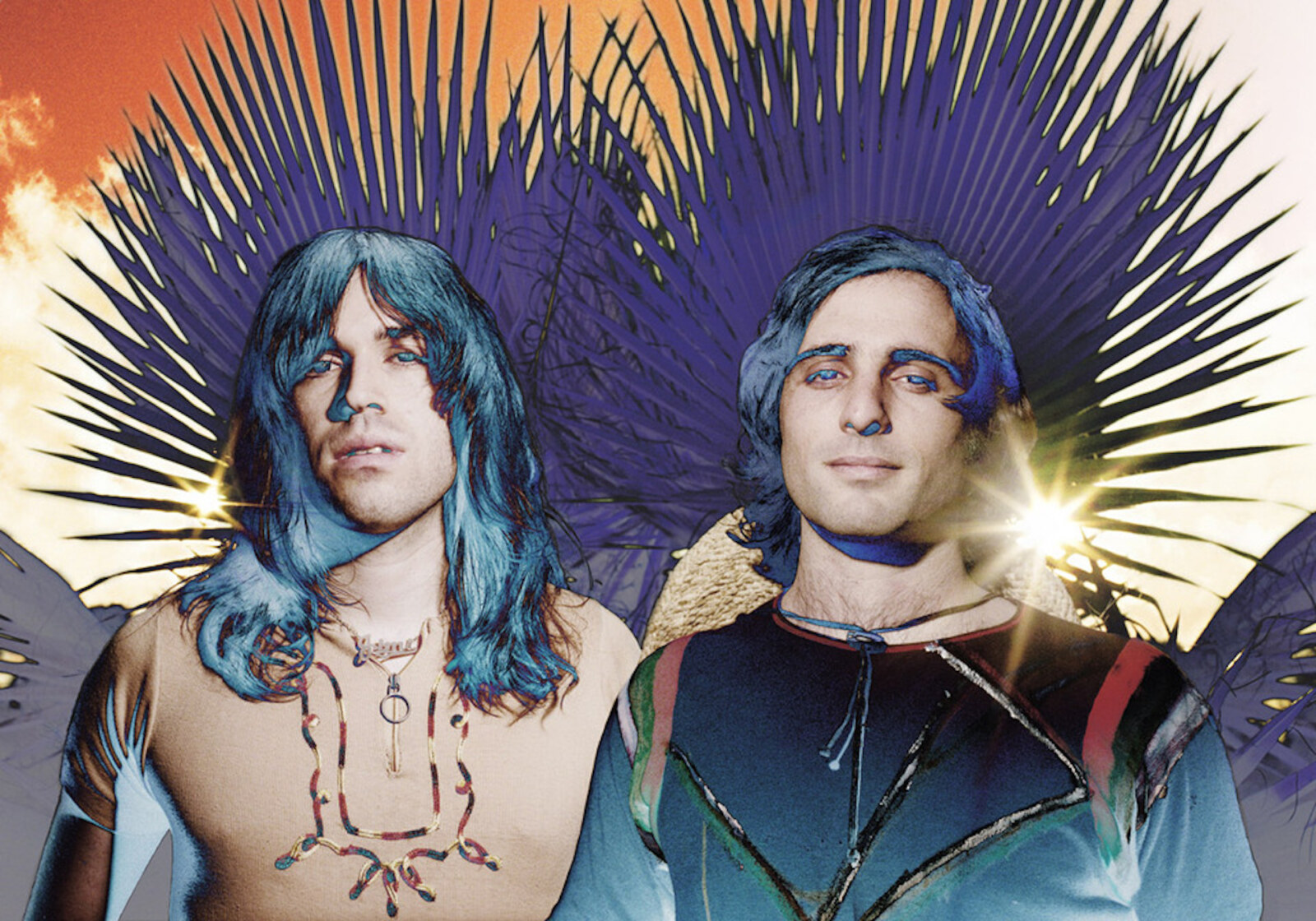 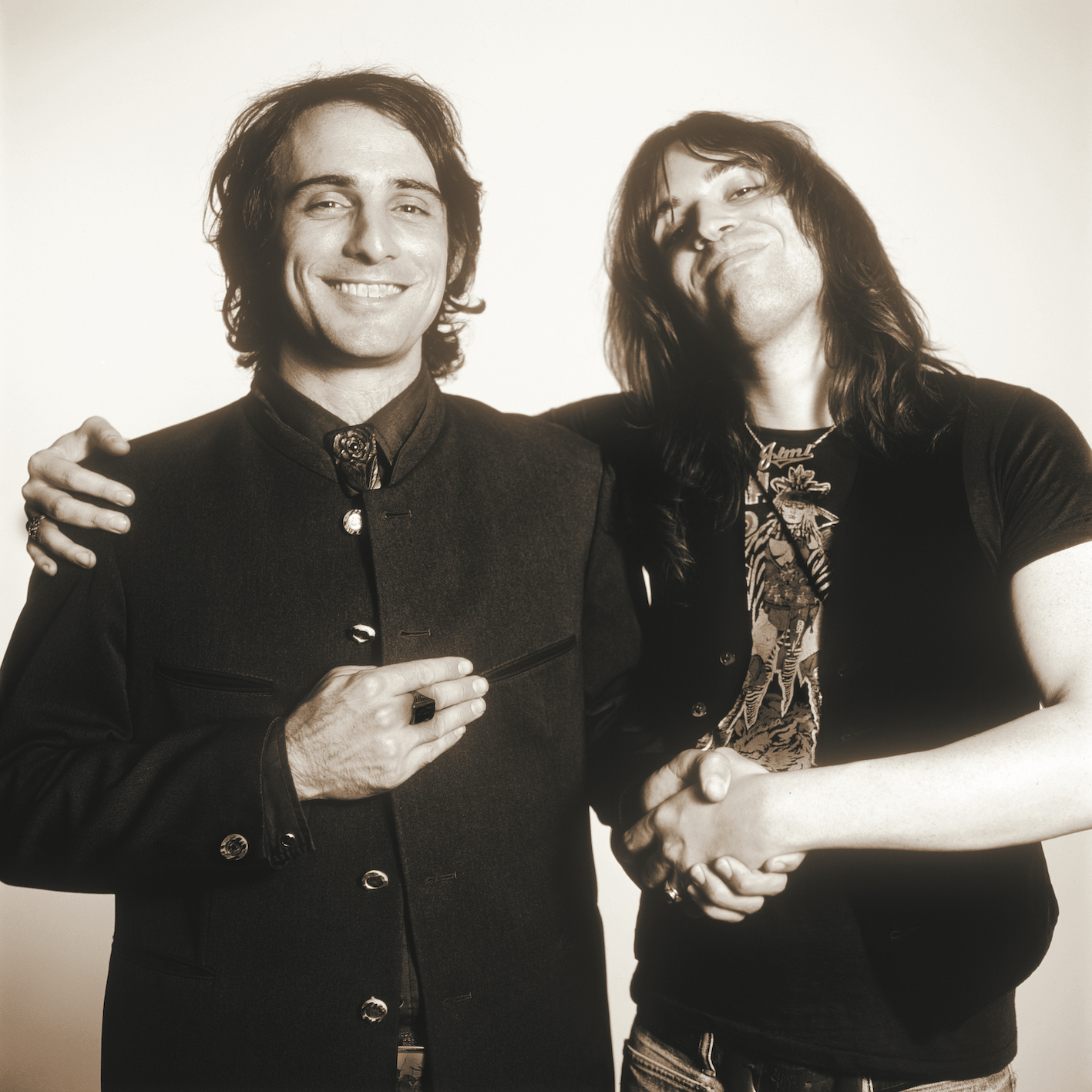 “Music for animals, plants, people not yet born”

What can you tell us about the formation of All Night Radio?

Farmer Dave Scher: I’ve written songs since I was 15 or so, earlier if you count things I would sing in my head or hear in the world around me and equate to music. I remember hearing music like the Love Unlimited Orchestra in the sound of a flushing toilet back in ’77. Out of college in the late 90’s, I joined Beachwood Sparks and had some great adventures. I contributed a few songs to the band and had begun to collect more songs and ideas, as well as the energy of performing, recording and touring the world for a few years straight with Beachwood Sparks. We got off the road for awhile in 2003, and it was the perfect time to make an album… I was young, energetic, and in love with life!

How did you get signed up to Sub Pop Records and what was the deal with ‘Spirit Stereo Frequency’?

Our label Sub Pop Records dug some 4 track demos I sent them. Tony Kiewel was and is the best! I got a Mac G4, a Digi 001, reached out to Jimi Hey, a killer musician and friend who had been in Beachwood Sparks and was key on the scene before that. I could play a lot of instruments, but needed drums and he rules at that. As we worked on the album, Jimi’s role in the band grew… we had a pretty good time getting the project together!

I’ve always vibrated with Spirit and the cosmos… love cosmic music, West coast music of the 20th century, jazz, hippie rock, folk rock and psych, and have a real affinity for some of the mystical bandleaders and producers: Joe Meek, Lee “Scratch” Perry, Sun Ra, Brian Wilson, Stockhausen, Syd Barret, and thinkers like Tesla, Hazrat Inayat Khan, Paramahansa Yogananda, the Beat Poets and others. For me, there are layers of dimensional reality available through attunement, places to go beyond linear space and time. We called All Night Radio “omnichronistic music”, including all times, the lyrics to the title track describe some of these ideas: “music for animals, plants, people not yet born”. Spirit animates us and all things. Working with this consciously can really help us out in times of need. Matter and energy can be a righteous trip… timeless!

What are some of the strongest memories from recording it and what can you say about the songs?

Jimi and I worked hard and pushed ourselves and the technology at the time to the limits, always in the name of fun, adventure and making something that would be memorable, blow our own minds. It wasn’t always easy! I remember having sometimes three different computer sessions for a song, one for the groove, one for the vocals, and one for the atmospheric elements, then combining them later in mixing. I remember moving my mouse across the screen and leaving trails… the drive was fragmented and so was I! Jimi and I were in a small rowboat heading to China, it seemed. You couldn’t speed up the process, had to keep at it. I think we learned a lot. I would always leave live microphones on and play whale records and other things, I’d run sounds into the computer through the Echoplex and back out again, sample pieces of movies et cetera into our tracks. Walks in Elysian Park would help set the mood for the day, along with entheogenic enhancements. I heard the ending of ‘Fall Down 7’ in my head while riding my bike around Echo Park lake… riding home and getting the idea down almost exactly! I was super into Wild Style and NYC graffiti so we put spray paint cans and trains in there. Getting my cat Anchovya to call out just before the chorus of ‘Sad K’ was tough… a medley of her calls appears at the end of the track… weather always gathered at the end of the tunes and I’d leave a lot of that in.. allowing the unexpected to come in. ‘Sky Bicycle’ was about real life 14 year old aeronautical pioneer Cromwell Dixon, who actually built and flew sky bicycles in the early 1900s. One can clearly hear the influence of our dear friend Tartarex, known to California, the UK and Sweden for making the best mixtapes for us with rare as rockin’ horse shit sounds of the 60s and 70s….songs to elevate our belief in what was possible. Remembering Jimi ripping on the drums for the end of ‘You’ll Be On Your Own’, fuzz bass, also. Just ripping in the apartment living room! Elvin aka “Nobody” made us a killer beat for ‘Winter Light’. My girlfriend from that time, Kime, was from Ohio…. I was in Paris and wrote a love letter to her, put it in the empty wine bottle I’d just drank and threw it in the Seine river… lyrics for ‘Daylight til’ Dawn’. Ahh, so many good memories, it’s great to answer these questions and go back there… we thought times were complicated in 2003…now they seem almost quaint, can you imagine! 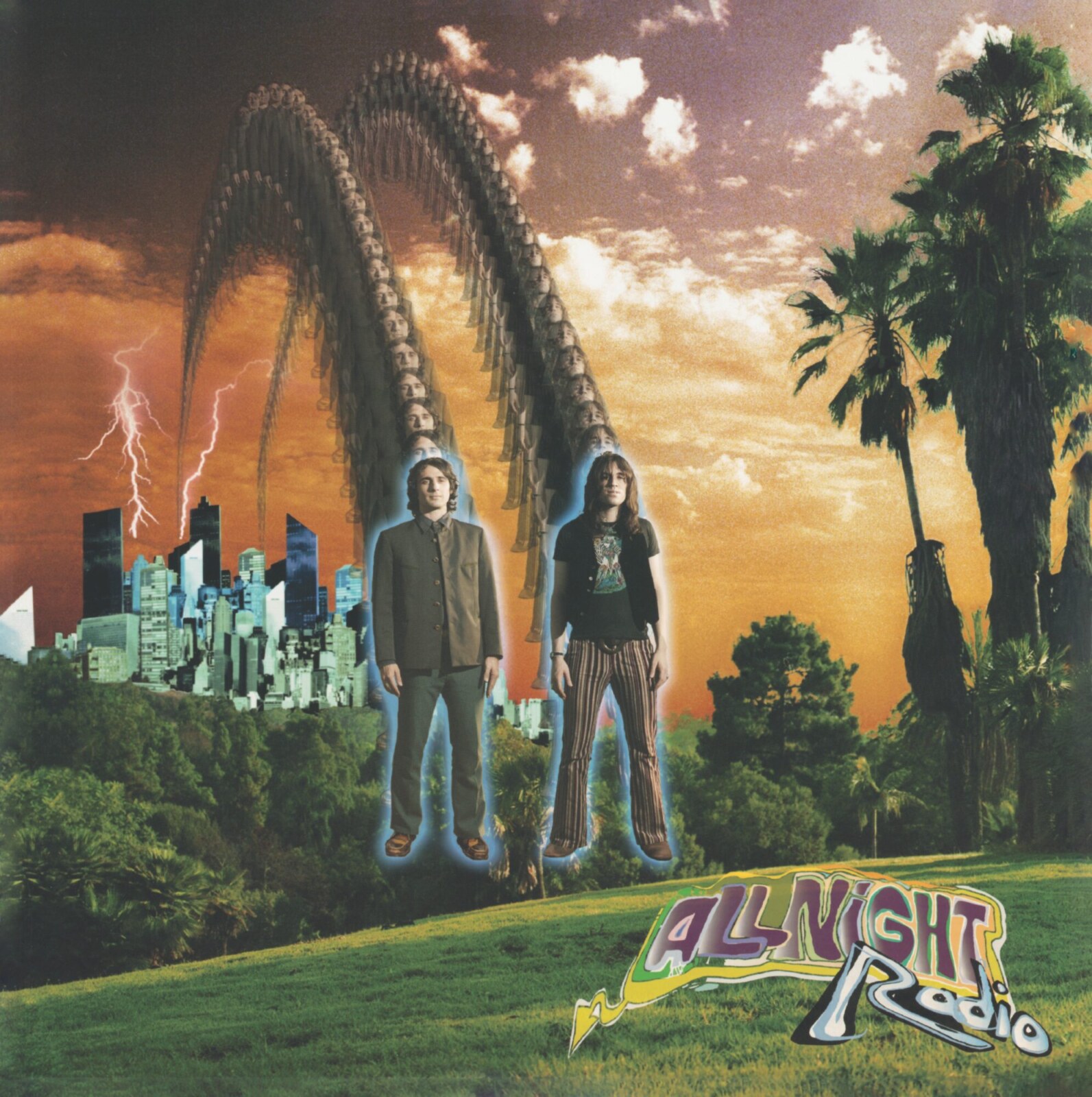 Are you excited about Big Potato’s upcoming reissue?

I’m glad you’re excited, I definitely am! It’s great to have people who believe in you. It’s great to take that chance and make the best art you can, ‘Spirit Stereo Frequency’ proves to me what can happen when you believe and take the ride. I’m forever grateful to everybody who helped… Jimi, Jennifer, Brandon, Tony K and everyone at Sub Pop, the fans who have really been kind, radio stations and Djs that believed in and played the tunes, and now Nick and everybody at Big Potato, also you, Psychedelic Baby!, for giving a damn!

What was the highlight of your time in the band? Which songs are you most proud of? Where and when was your most memorable gig?

Once we got Tim Koh in the band, I think there was a period where we were just ripping! You know there’s a flyer for a show we played with Ariel Pink, Avey Tare and Panda Bear, Tim and Eric?! We were of a certain time, loved Ariel and his work, Jimi knew Animal Collective and Black Dice who were and are very dear to me. Also, Jeremiah from Modest Mouse… Aaron Embry. We had a show at Spaceland in which ‘You’ll Be On Your Own’ was just melting, man. I had goose bumps playing the end, almost crying , it was dope! Austin, Texas, for a South By Southwest was another real banger. Big crowd and we hit heavy, man. I woke up the next day next to Town Lake with an empty bottle of whisky and a lysergic sense of bewilderment. Also, in Baltimore, playing an “Aerobed solo” at the end of ‘Sky Bicycle’ … I inflated an aerobed and sang the song laying on it. I invited a couple of people from the audience to join me, then during the whooshing outro of the song, put the vocal mic into the aerobed as it deflated and ran it through heavy delay, rolling around on the deflating bed to add more overtones. Lastly, playing the Troubadour in LA and Jimi ran out into the crowd and handed out records to people. 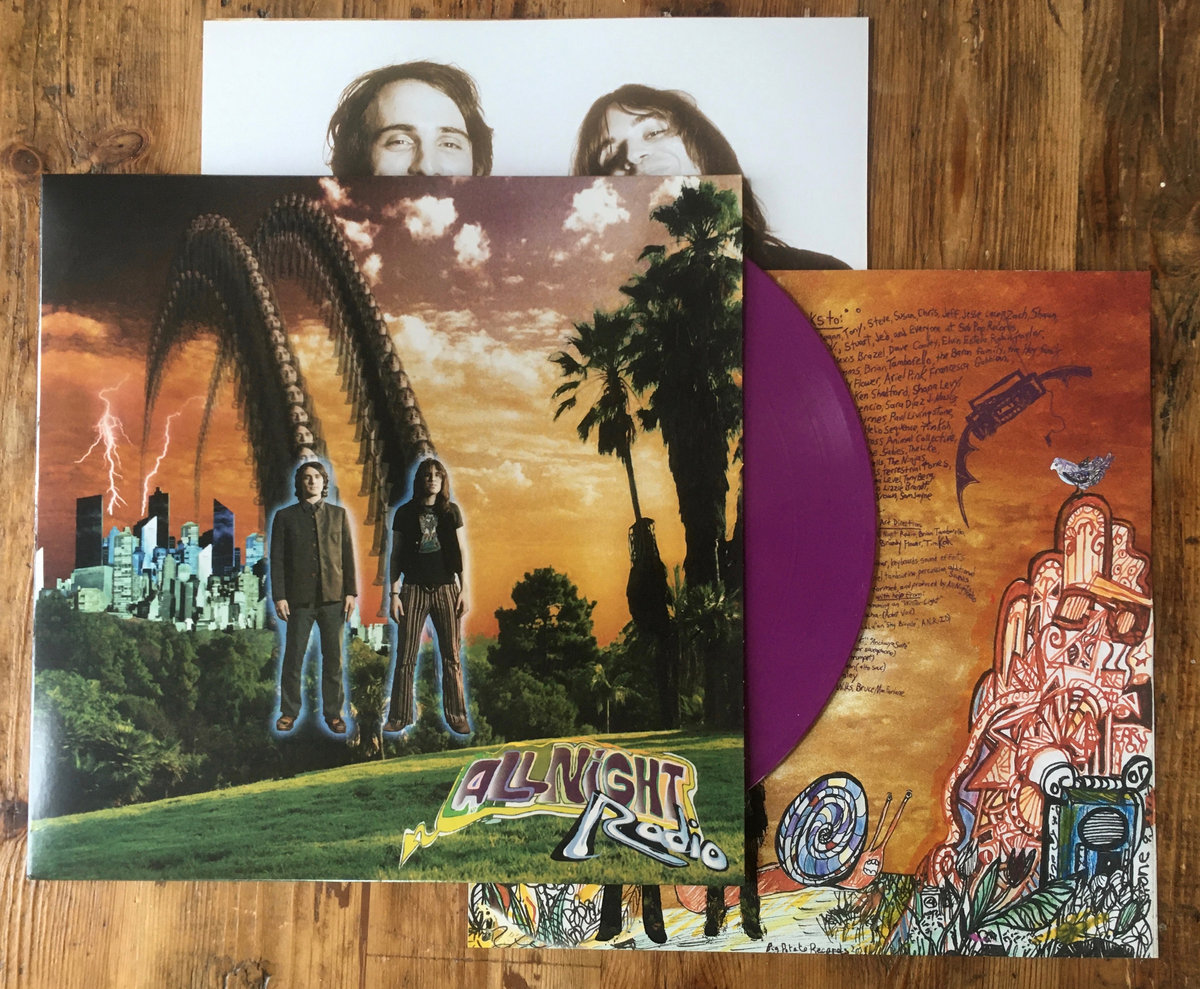 He worked at Amoeba Music and got all these great albums from the bargain bins and gave them out to the audience during the outro of a song. That’s the spirit, Jimi!

She was a heavy dream, didn’t fly for long, but those grooves live on, now thanks to Big Potato, the ‘Spirit Stereo Frequency’ is reanimated, she’s alive… alive! I’m forever grateful, man… very blessed. Thanks.

‘Right Vibration’ by Farmer Dave & The Wizards of the West

All Night RadioFarmer Dave & The Wizards of the WestInterviewKlemen Breznikar