Belgium’s Neptunian Maximalism (aka NNMM) is a community of “cultural engineers” with a variable line-up, mixing drone metal with spiritual free jazz and psychedelic music.

“We try to create a sense of acceptance of the end of the “Anthropocene” era through a musical and soteriological experience.”

Who’s in Neptunian Maximalism and what do you all play? Have you all made any changes to the lineup since you started or is this the original lineup?

Guillaume Cazalet: NNMM is a community of “cultural engineers” (*Genesis P-Orridge) with a variable line-up. This project was initiated by me, Guillaume Cazalet (Czlt, Jenny Torse, Aksu), and the veteran saxophonist player Jean-Jacques Duerinckx (Ze Zorgs) in Brussels. Together with two drummers, Sebastien Schmit (K-Branding) and Pierre Arese (Aksu) it started in 2018. The result was a bifacial entity. Sometimes calling for a primitive voodoo trance with percussive intonations dominated by rhythm and a savage movement, sometimes towards a psychedelic meditation with prophetic and spiritual accents resting on an amplified drone music where the time is explored…harmony, the power of the tonic and its iridescent harmonics, durability, weight, ruin. 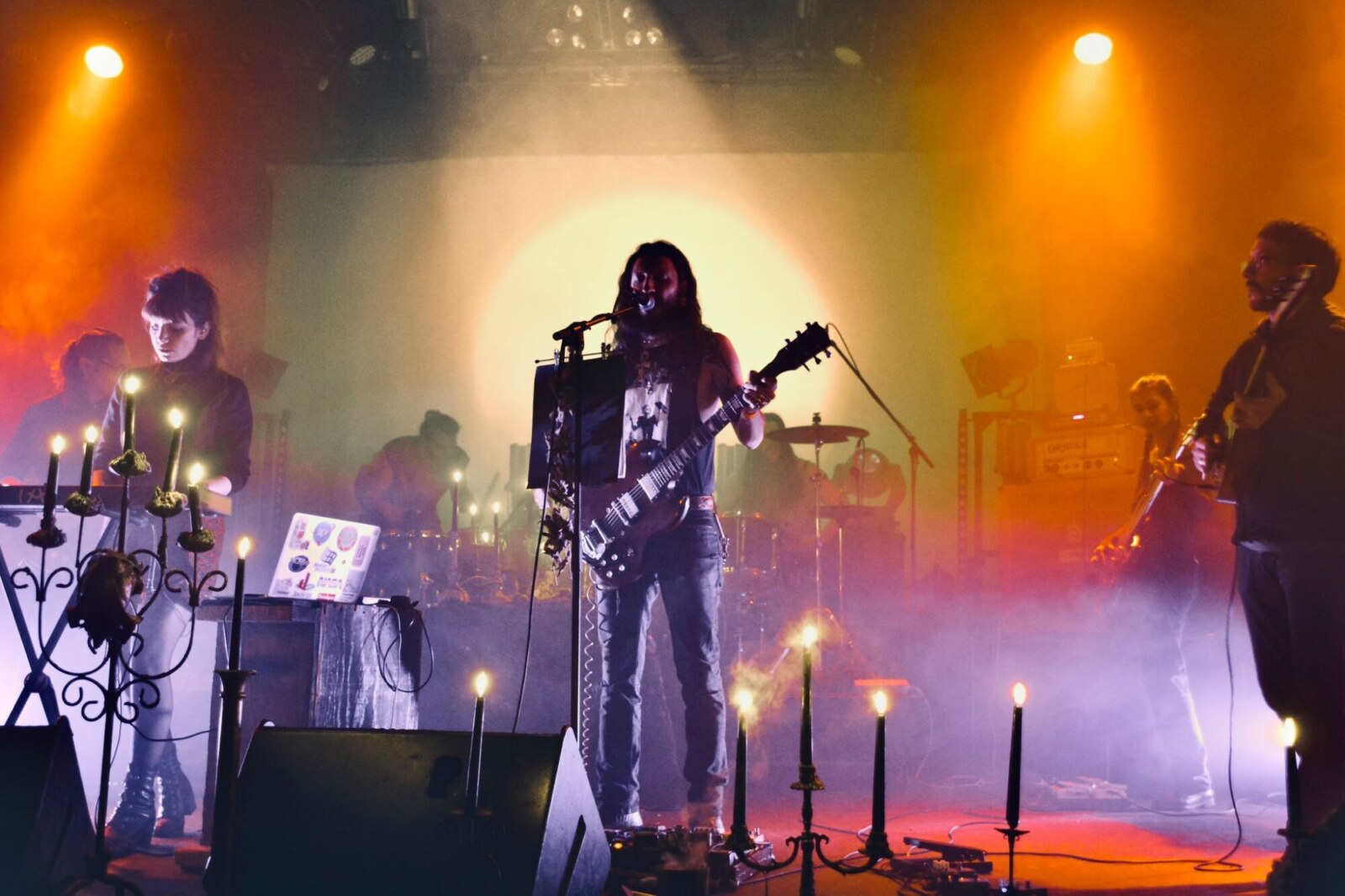 Pierre Arese is my cousin. We come from the same city on the Mediterranean coast. We have been playing music since the age of seven at music school. I met Jean Jacques through his free improvisation laboratory Lab’OMFI (One Moment, Free Improv), in which I brought Pierre back. I met Sebastien in 2012 during a performance in Charleroi where we were consisting of seven drums, five electric guitars, an electric violin and a crazy vocalist. (The recording should be released on my label Homo Sensibilis Sounds under the name ‘EOR: Le Combat de Carnaval et Carême’).

What does the name “Neptunian Maximalism” refer to?

Neptune is my planet because I am Pisces, Pisces as a solar and lunar sign. Neptune is the planet of unfathomable abyss, impenetrable scramble, infinite ocean, dreams and utopias. It’s the other world. The concept of Maximalism is first of all an opposition to the Minimalist current which still dominates the art market and whose meaning is now completely distorted and perverted. It is also because my musical approach is defined by “More Is More”, than by “Less Is More” (Adolf Loos, Mies Van Der Rhoe) which strongly characterizes current capitalism in its strategy of least effort for maximum gain. And then as a Pisces, I am therefore naturally carried towards the infinitely large, the maximum in a way. It is the reflection of many utopian and disproportionate ambitions, now channeled.

Is there a certain concept behind the collective?

By exploring the evolution of the human species, particularly through the use of speculative texts in homo-sapiens prototypal language (*Pierre Lanchantin) and a shamanic approach of some elements, we question the future of the living on earth. We try to create a sense of acceptance of the end of the “Anthropocene” era through a musical and soteriological experience.

Yes for sure. First I have my drone/Indian music solo project Czlt were I play sitar and flutes over drone metal soundscape. I’m also in Aksu with Pierre Arese and in Jenny Torse with Stephane Van Tricht. I have another secret solo project of psychedelic brutal black metal… I recently joined Oath Okrana for the studio recording of their first ep. I will also release two new projects, probably under the name of Zaäar (NNMM’s side project) and Chacruna Temple (Jenny Torse members, but psychedelic and futuristic black metal under DMT drug) on I, Voidhanger Records and WV Sorcerer Productions. And I was into Bonepipe, Vorax Virosus, Siamese Queens, Fxf Kfb.

“We explore as much as possible, with each of our respective universes” 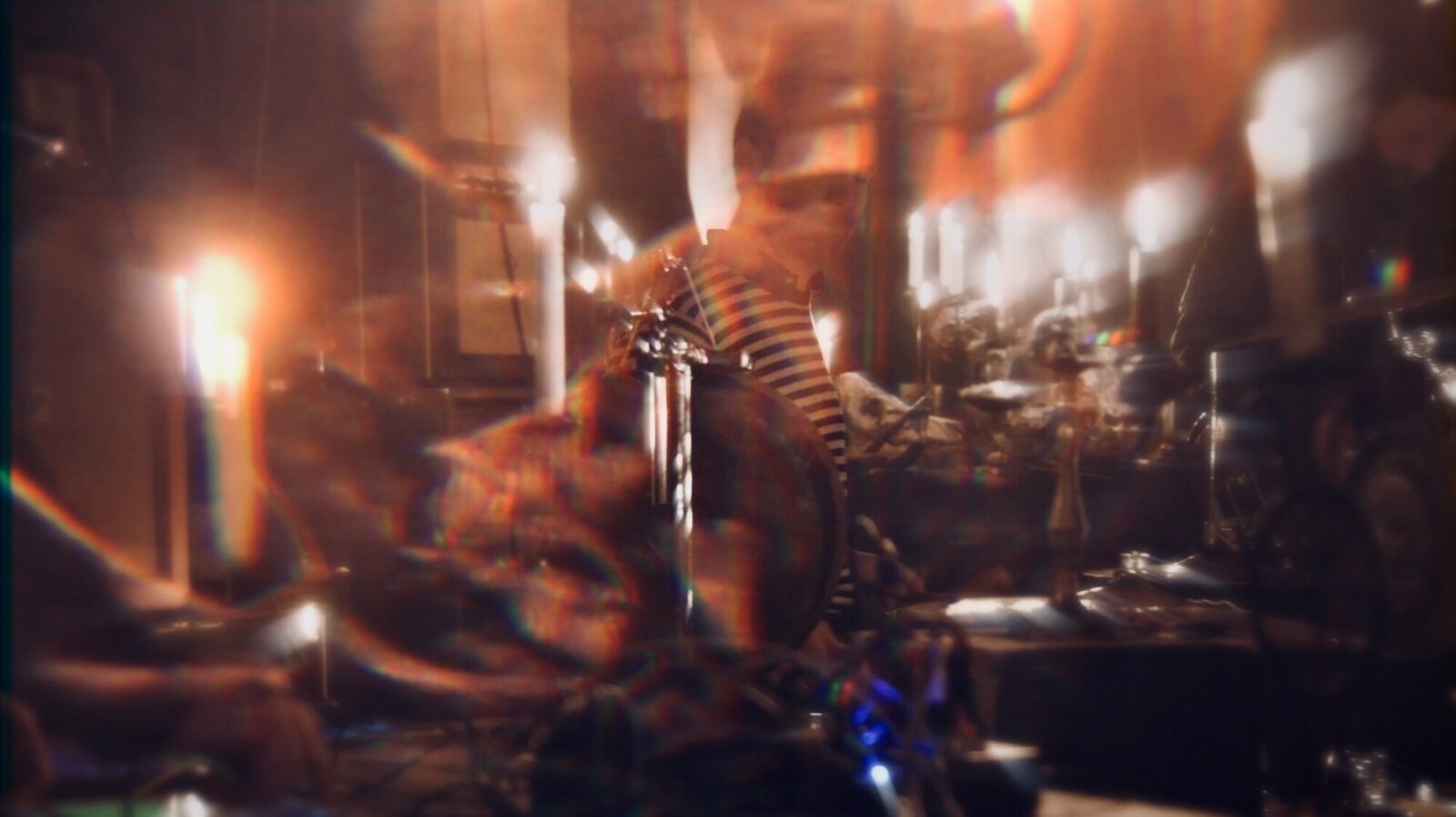 We start with a recording session based on free improvisation. We explore as much as possible with each of our respective universes. They enter into dialogue in a heavy landscape, which goes from tribal to meditative. Then I get the tracks and I isolate the most interesting takes. I edit and clean them in the mix. I listen to this carefully, trying to focus on what might be missing from an improv session that finally becomes a song. So at this point I begin a session of arrangements complementary to what is already there. I play the bass where I had recorded the guitar, I add the vocals, etc. I try to do everything in just 1 take to stay in an intuitive approach and respect the rules of spontaneous improvisation. I also invite other musicians to come and record parts of voice, saxophone or other.

Can you share some further details about how your latest albums ‘Éons and The Conference Of The Stars’ were recorded and released?

‘Éons and The Conference Of The Stars’ were recorded during the same residency session at ‘HS63’ in 2018, following the process described above. We used two batteries, a baritone saxophone in low C going into an octaver down and amplified reverb/looper on a vintage acoustic bass amp, and the guitar/bass going into a big pedalboard (fuzz, ring modulator, octaver down, reverb, delay, etc.) and plugged into Sunn O ))) Beta Lead and Beta Bass as well as an Ampeg SVT VR on 8×10″ cab. It was a rather rough session because it was very cold. We had to use a cannon to heat. The cold even made the saxophone retract to the point where it took almost 1 semitone higher, in C# therefore, but we succeeded with only a few microphones in stereo pair and 2 stereo digital recorders (Roland, Tascam).

It is thanks to the confidence of Luciano of I, Voidhanger Records who following a few emails insisting on my part to end up seeing our request and offered to release the three albums at once! This is how ‘Éons’ was born, and I was able to establish all the narration spanning three albums. And then we fell in love with Kaneko Tomiyuki’s painting. It’s impossible to contact him, because often Japanese artists do not have email and do not speak English. I finally managed to get a discussion with the Mizuma gallery which represents him on the pretext that I wanted to buy a work, to finally show them our album project. We had the rights (quite expensive) and from there I started to make all the rest of the artwork (logos, layout, etc.). 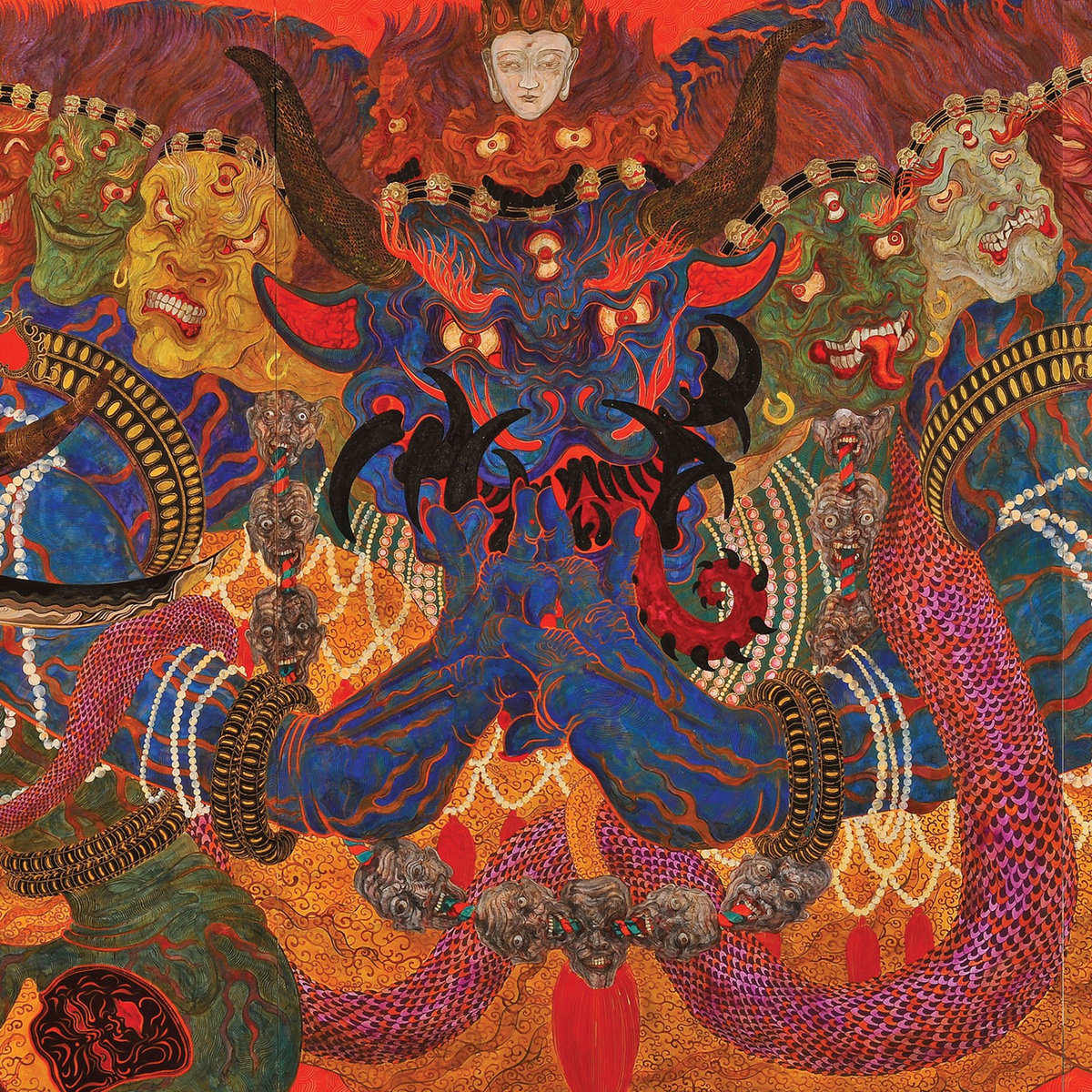 I would say that we are at the limit of extreme metal, more precisely drone metal, spiritual free jazz and psychedelic space rock/’krautrock’ with influences from traditional music from around the world, whether tribal or classical (Indian, flamenco, Afro-Cuban, etc). 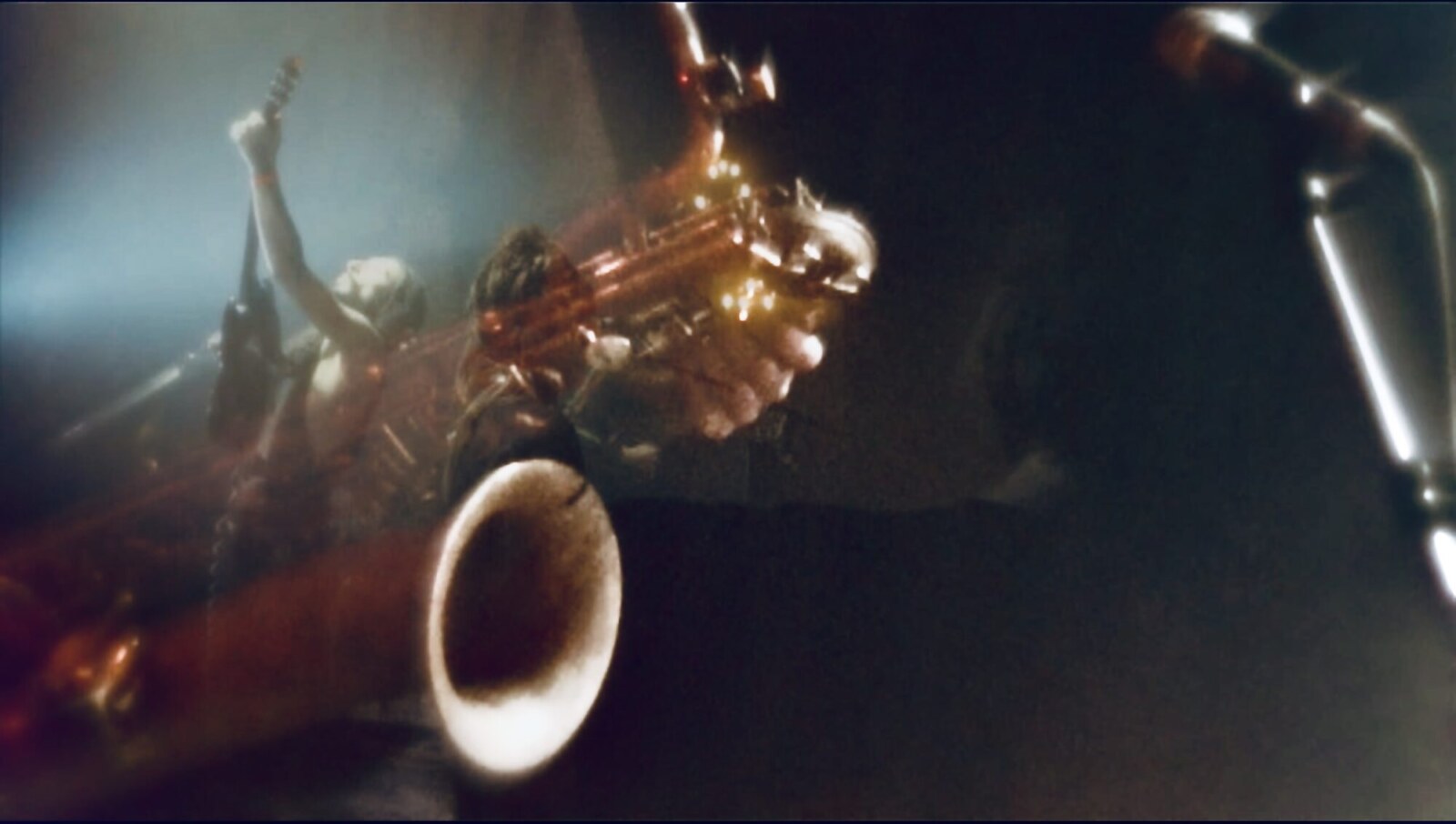 That’s why we talk about our music as “heavy tribal” or sometimes “drone opera”/arkestra (since there are 9 of us on stage to achieve a total and transcendent experience).

Tell us more about the artwork?

I’m behind it under the nickname Czlt, and Kaneko Tomiyuki is the painter who made the painting “Vajrabhairava” (2014) that we used, and which initially is 6.20x3m.

How about ‘HS63 Live Performance’?

It is our very first performance at the end of the 3 days of residency during the recording of what was ‘Éons and The Conference Of The Stars’. It’s 100% improvisation. We had absolutely no idea what we were going to play before we started.

“Thus an open door to other souls, other spirits who therefore have the opportunity to speak through us.”

Improvisation is already spontaneity, the present moment, intuition at its highest point. So this means that what speaks is not our head, our exalted ego in a composition which dominates the musicians, but something else. Perhaps it is thus an open door to other souls, other spirits who therefore have the opportunity to speak through us. I try to summon our prehistoric ancestors by different means. This is my personal path. 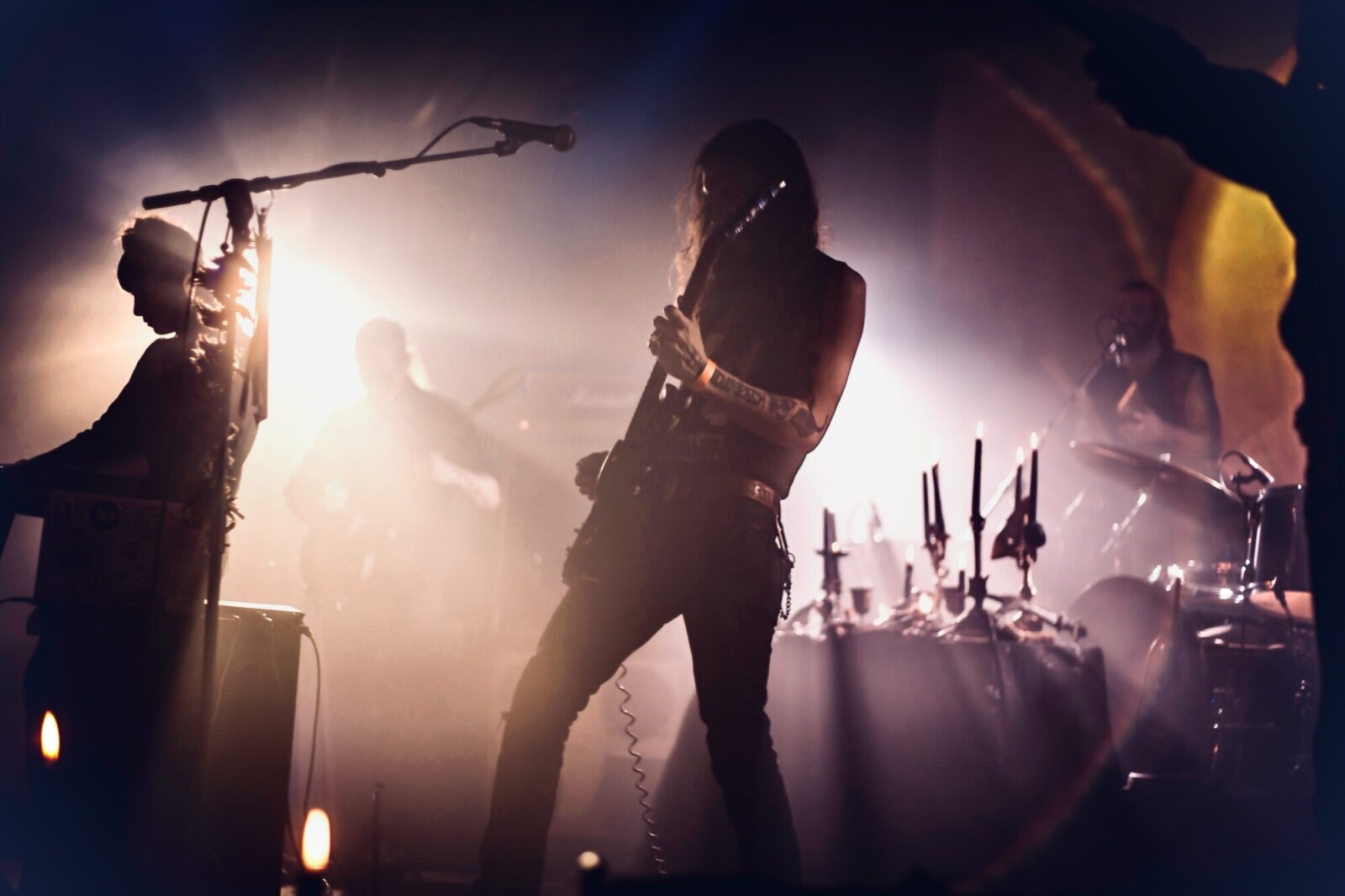 The present moment also needs to be there here and now and to take a hold of what is happening when it is happening. No blocking on the past, or overwhelming desires for the future. That is to say that there are no false notes, compared to the previous one or to the one that will follow for an example.

Improvisation is also a political and social posture. That is to say that for us, there is a dimension of anarchy: there is no boss, no composition that dictates anything, everyone listens to each other, everyone respects each other, and above all we trust each other, we believe in everyone, without judgment. We must let ourselves be spoken (musically), sometimes know how to be silent, let others express themselves, but also we have the responsibility to take part, sometimes to take the lead. But there is no relationship of subordination. It is therefore a know-how to live in community, a know-how to communicate which is exemplary for real life in society and which proves that one can do (great?) things without a leader, without domination, without authority, without dogma, without command. Just people who “can”. “Power” is at the heart of everything, in opposition to will (we speak of “power” in the capitalist world, but in reality it is “will”). Because, as the philosopher Giorgio Agamben says, the will is to order oneself to obey. What you can, you can do.

We play live as much as possible. We did concerts with 4, 5, 6, 7, 8 and 9 members, sometimes in rooms of 10m2, sometimes in large rooms. We adapt, we resist. But if we want to play 9 members plus our scenographer, we need space and a certain technique of course. We’ve only been doing shows for over one year, so we’ve never played with big names, but we’re going to play with Wolvennest in December for example, or Temple Fang.

We will have the release of a live vinyl + DVD in January. We will return to record soon and some dates including the Northern Winter Beat Festival in Denmark, and the next month at the Walk The Line Festival in Holland. Also a potential tour with two other very good bands, but I can’t say more for now, especially with the vagaries of the Covid, nothing is as certain as before. 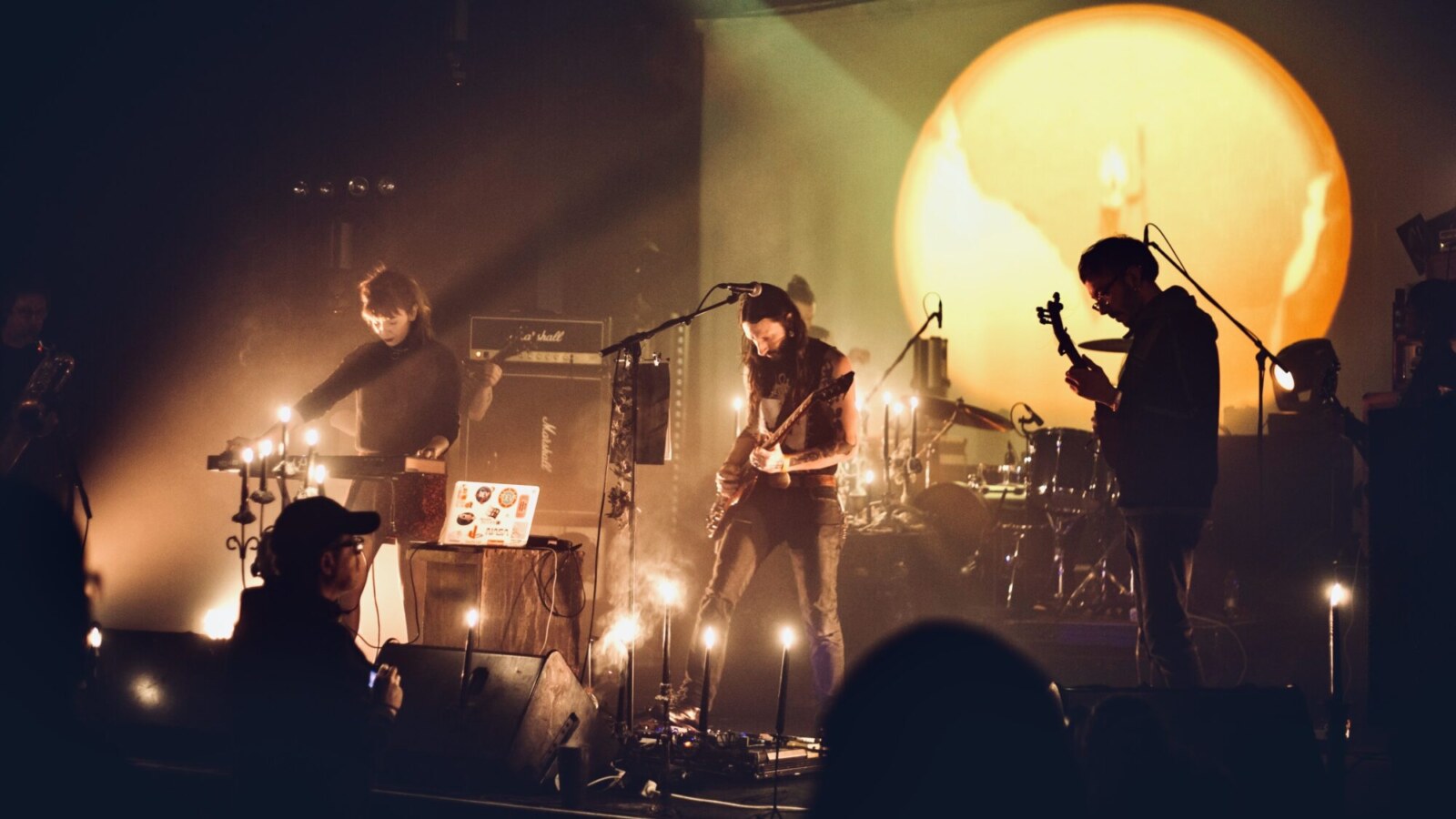 Recently I had a lot of fun with Psychic TV & White Stains – ‘At Stockholm’. Otherwise I stay of course with great classics like ‘Dopesmoker’ from Sleep, Sunn O))), Swans and many others. I think my last big slaps go back to discovering the work of Eliane Radigue, Diamanda Galas, Bong and exploring Indian music from my first slap with Ustad Asad Ali Khan until the song of pandit Malikajun Mansur/Parveen Sultana/Kaushiki Chakrabarty as well as the sarod of Ali Akbar Khan, or the sitar of Ustad Irshad Khan and Ustad Nishat Khan, as well as the discovery of Indonesian Gamelan music.