Mong Tong are brothers Hom Yu and Jiun Chi. Their latest album is a psychedelic journey into Taiwanese folklore combined with the 80’s media obsession with the supernatural.

Brothers Hom Yu and Jiun Chi also play in ​Prairie WWWW​ and Dope Purple. They both returned to Taipei in 2017 after finishing their studies and before long began to explore their mutual obsession for Taiwanese occult-inspired art and vintage superstitious imagery, channelling it through music.

“A psychedelic journey to the east”

When and how did you originally meet? Would you like to talk a bit about your background?

Hom Yu: We are actually brothers growing up together and I saw his birth when I was 4! Mong Tong started in 2017, at that time my brother moved to Taipei, and before that we had played in different bands but never really released music together, so why not?

Chi: Once I moved to Taipei, we started a duo and firstly tried to sound like a band called Sun Araw. It turned out we sounded slightly different, and surprisingly we have something different now!

Was there a certain concept you had in mind when forming Mong Tong?

Hom Yu, Chi: Actually we are a little bit bored of playing in traditional rock bands, because it takes much time making and releasing new music. We’ve had enough knowledge and experience to do each procedure in music-making, so even if only two of us, we can still handle everything. In short words, we want to make something about Taiwan, and it must be fun and really challenging. That’s how we started.

Hom Yu: I was watching Live at Pompeii by Pink Floyd at home, and for the first time I used a projector and a big screen to watch it! I could feel the real beat and song structure then, and that’s the time I felt in love with psychedelic music.

Chi: I was high on a raining night at a fifth-floor bar, and I had bought two vinyl that afternoon (Shinki Chen-Shinki Chen & Friends, Ghost‎-Hypnotic Underworld). When the bartender started playing my vinyl, it made me feel like I was in their live show! I could almost see the band members standing in front of me; they brought me to another world that I’ve never heard before.

Hom Yu, Chi: We’ve been listening to different genres since kids. Before Mong Tong, we even played in different bands from metal, psych rock, to experimental music band. When getting older, it became harder for us to find interesting music. That’s when we decided to work together and make our own stuff for satisfaction.

Hom Yu: ​Prairie WWWW​, I joined this art rock band in 2018 and now play synth and guitar in Prairie WWWW. I sometimes do free improv solos as well.

Chi: Dope Purple. I’m the rhythm guitarist in Dope Purple, and we are a noise rock / psychedelic jam band.

What does the name “Mong Tong” refer to?

Hom Yu, Chi: We simply love how it sounds! It can mean something totally different not only in Chinese but different languages (Burmese, Cantonese, …etc. ). So actually there’s no correct answer. Although you can see Mong Tong as the Chinese translation 夢東 (eastside of the dream), we are still waiting for more creative thoughts from our audiences.

“We try to make our songs like you are playing video games.”

Hom Yu, Chi: We always read and discuss things together first, and then we make drum loops and record guitar/keyboard improves based on that beat. After that we edit them and rearrange the whole thing again, making everything sound right. We might sample interesting sounds at this point. By adding samples from TV shows, movies, games or even the environments, basically we try to make our songs like you are playing video games. 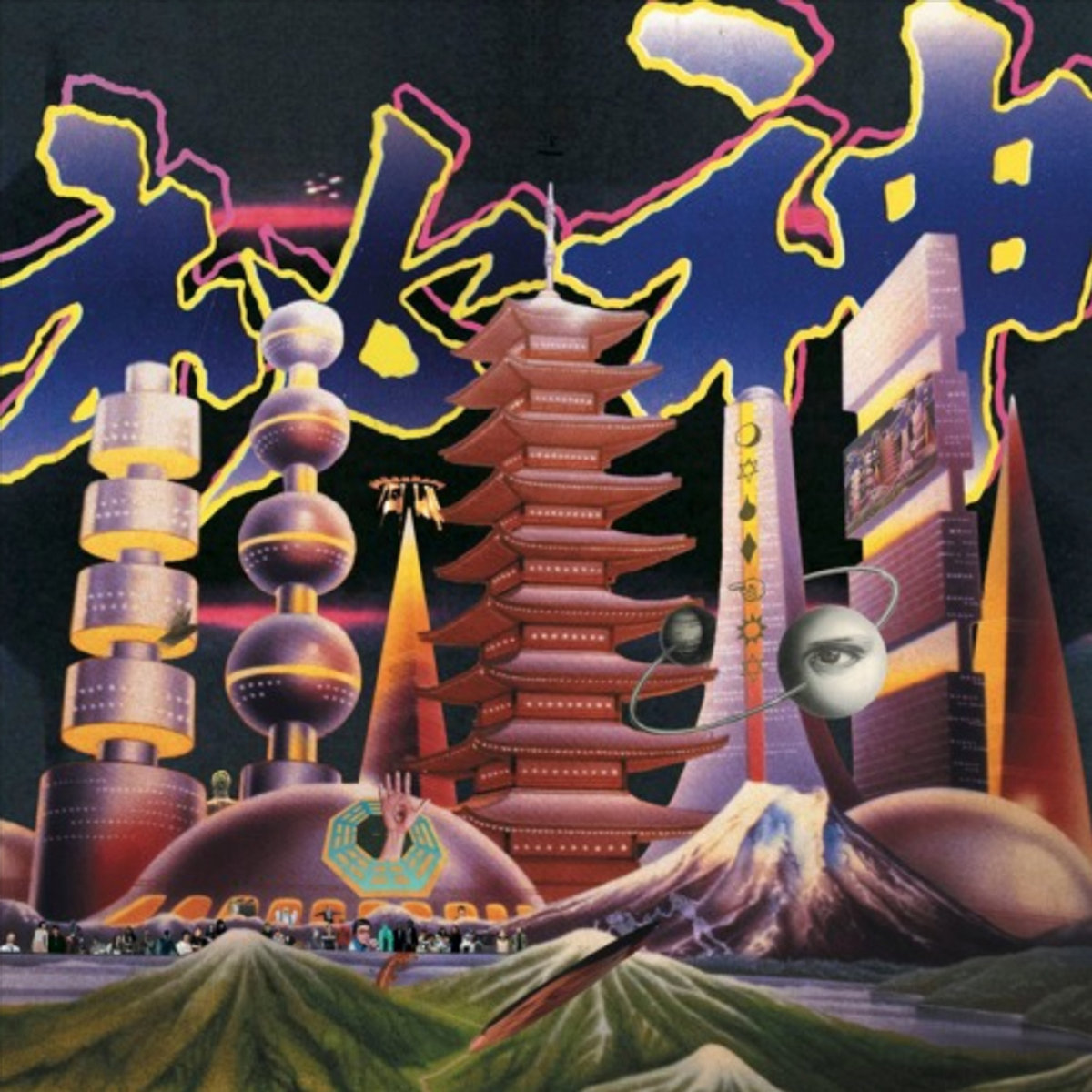 Can you share some further details how your latest album Mystery 秘神 was recorded and released?

Hom Yu, Chi: The most difficult part when recording was that we used a real spring reverb pedal on each percussion sample in this album. To keep those all-important details intact and still get a spacey feel, we spent so much time and effort to make sure everything was right. After finishing the demo and sending it to Go and Tomo, they loved it and wanted to release Mystery 秘神 on vinyl. We are really thankful for their help!

There seems to be a very interesting concept behind it. It’s a combination of Taiwanese folklore eighties media obsession with the supernatural eastern occult?

Hom Yu: In 80/90’s Taiwan, some magazines talked about ghosts, Taoism, UFOs and supernatural photos. After decades, these themes are no longer popular anymore; most of these books are lost and can only be found at a few second-hand book stores. We’ve spent much time on searching them and chose some of our favorite book covers, then put them on my Instagram.

Chi: Once you call something a superstition, it means you don’t believe in that. We see our superstition as an art form and do research on it, as a result we dig out much originality and imagination inside it. Occult and conspiracy theories are very fascinating, but remember don’t be too superstitious.

You guys are currently with Guruguru Brain – how did you get discovered by them?

Hom Yu: Prairie WWWW’s EP 霧海 Wu-hai was released by Guruguru Brain in 2016, so some of the members have known Go and Tomo since then.

Chi: Later Li-yang from Scattered Purgatory first introduced both of us to Guruguru Brain in 2019. We had a couple of conversations with Go and Zeze; we talked a lot about video game music and space age pop, and they decided to release our album into vinyl. Thanks to them!

“They had ancient cities, high tech and psychedelic music.”

Hom Yu: It’s made by us! We collected most of the drawings from old books / magazines at first, trying to put them together, but it took us half a year to make every detail right. There were 9 different versions for the artwork, really challenging for both of us.

Chi: We also imagine in ancient Asia, all the superstitions were real. They had ancient cities, high tech and psychedelic music. Based on the story, we built an impression through our artwork.

This is not your first release. You also released a couple of recordings on tapes and A History of Brightness was released on CD. Would you mind to share a few words about those recordings and how would you compare them to your latest release?

Hom Yu, Chi: Actually this album was finished in the end of 2018 and kept unreleased until now. Including Music from Taiwan Mystery and A History of Brightness, we put Easter eggs and hints about the future releasing of Mystery 秘神. For example, if you have the CD of A History of Brightness, you’ll notice that it’s a cipher box! Music from Taiwan Mystery is an soundtrack album for our tourist book ‘Taiwan Mystery’, which introduces Taiwan’s cultural and mystic attractions. We think these two EPs are more perfect and mature than Mystery 秘神 since back in 2018 we still had lots of space to improve.

“We make blurry and raw music. Imagine that if ancient people could play guitar and bass, what would their music be like?”

Hom Yu, Chi: This COVID-19 disaster forces modern people to face what is happening around the world; also, people now have less time to understand themselves. Therefore it is a good chance for us to understand ourselves more than ever during quarantines. In the future, we’ll have a new book ‘Taiwan Mystery II’ and its soundtrack album in December. When the virus is under control, we’ll definitely have our world tour!

Hom Yu: We make blurry and raw music. Imagine that if ancient people could play guitar and bass, what would their music be like?

Chi: Mong Tong is a psychedelic trio, and we are bringing to you mystic & oriental karaoke psychedelic music from Taiwan.

What is the local scene in Taipei? Are there any other interesting projects coming from your country that you would like to expose?

Hom Yu: There are different music scenes in Taipei, but I’d like to introduce artists under the label Lonely God including Scattered Purgatory, Forest 森林, and Prairie WWWW, all making experimental rock/electronic music you will definitely love!

Chi: My other band Dope Purple has released a record under Senko Issha, a label for noise music, free improvisation lovers in Taiwan. Mong Tong has collaborated with labels like Future Proof, Karma Detonation Tapes. Both of them have great artists and release good quality cassettes.

Hom Yu: I love raw synth music around the world such as Oscar & His Orchestra – The Sound of Taiwan’s Tribesmen, The Mystic Jungle Tribe – Qvisisana and Mamman Sani – Taaritt. I recommend the label Nyege Nyege Tapes in Uganda, one of my favorite labels recently!